The last few years, the inhabitants of LEGO City have been on quite the adventure, exploring the ocean, the arctic, and erupting volcanoes; this year is no exception, as they’re diving deep into the jungle. We picked up a copy of the largest set to explore for ourselves, since we wanted to check out the new pieces (jaguar!), as well as experience the new setting for one of LEGO’s longest running themes. 60161 Jungle Exploration Site has 813 pieces, and retails for $119.99 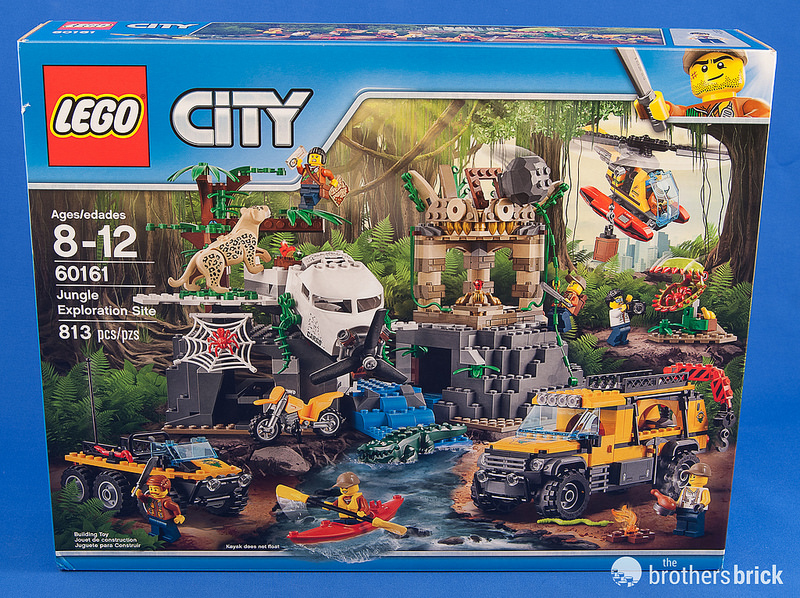 The box itself is standard fare, though we don’t really expect it to live up to special sets like the 21309 Saturn V. It’s got a picture of the set with a generic jungle scene behind. The parts inside are in nine bags, with the instructions and stickers in a separate bag. I prefer when instructions are packaged this way, since they don’t end up weirdly curled and the stickers remain flat. 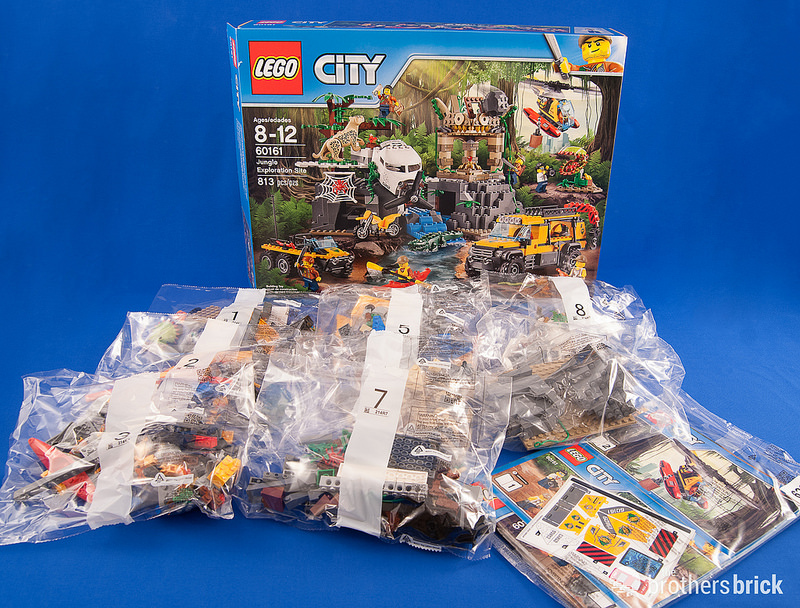 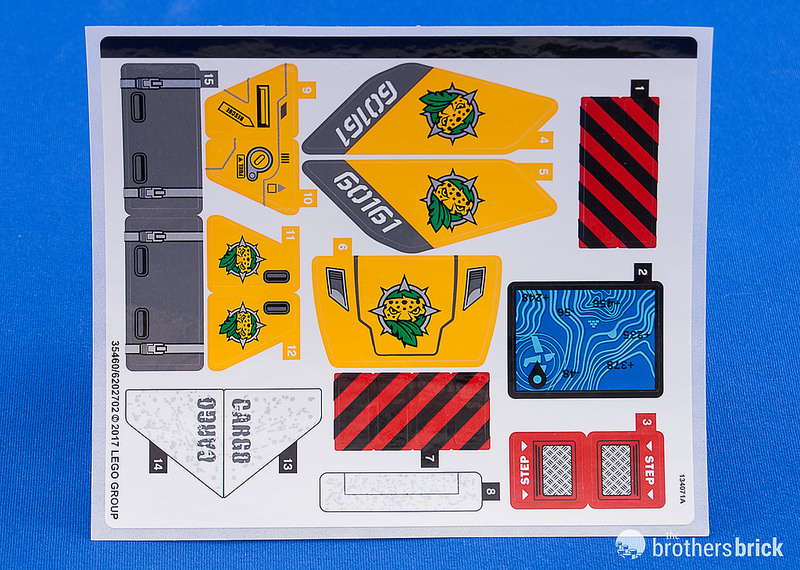 The back of the box is important, as this is where the play features are explained. Surprisingly, some play features, like the cave underneath the plane, were not explained in the instructions, so don’t toss the box aside too quickly. 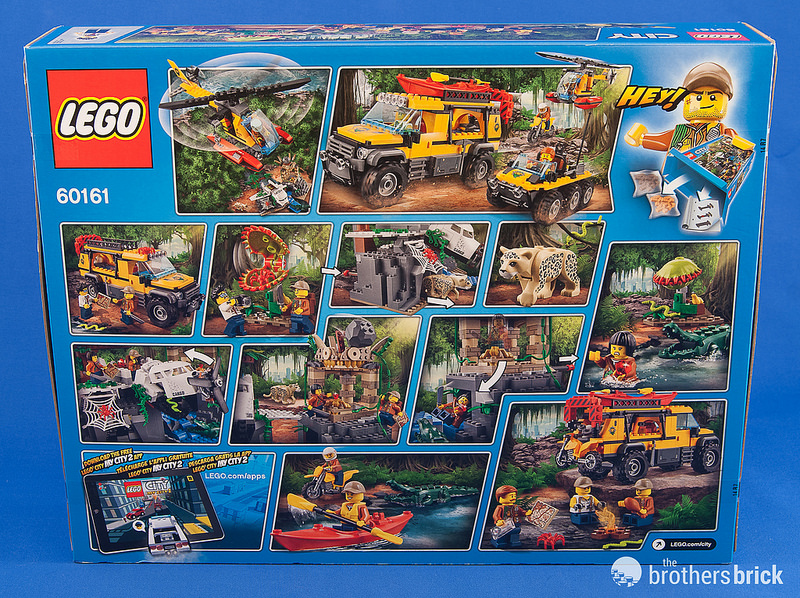 Speaking of instructions, this set comes with four booklets. Two smaller booklets build the amphibious vehicle and the helicopter; a third, larger one builds the all-terrain vehicle, and the final, large, bound book builds the temple, cave, and plane.

The set, while fun to build, does not contain any unusual techniques or particularly clever construction to make it stand out among other sets. The temple is straight-forward, but a solid build that makes good use of tan and gold to create a face, using 2×2 round tiles with holes as eyes to great effect. 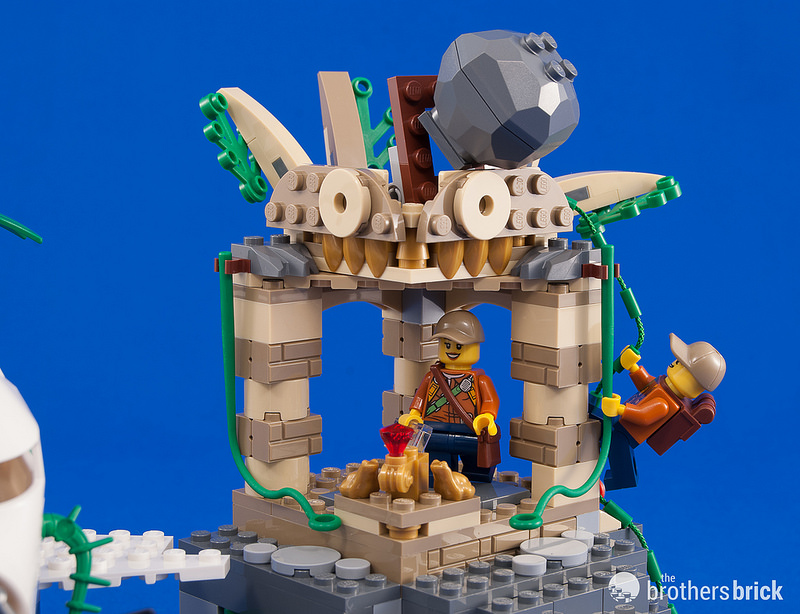 The plane is turned into weathered wreckage with hinges, with the whole nose pointed downwards and the wing sitting at a very wrong angle, and it’s covered in vines and leaves. 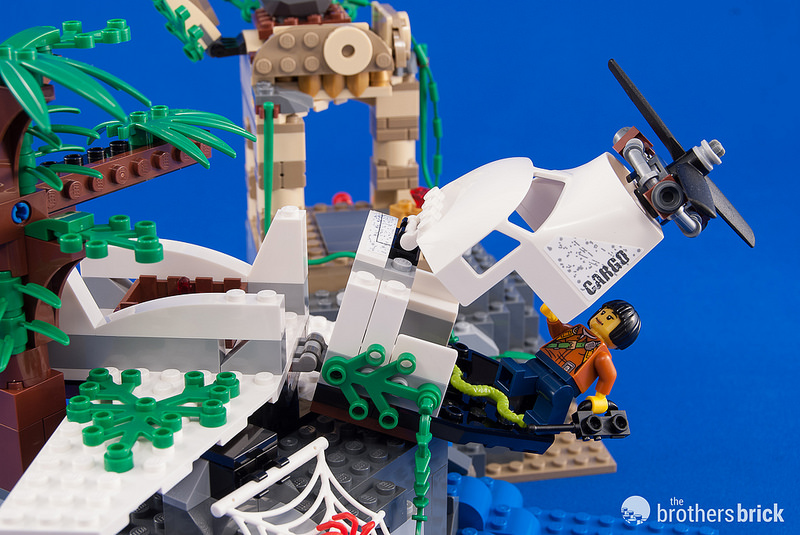 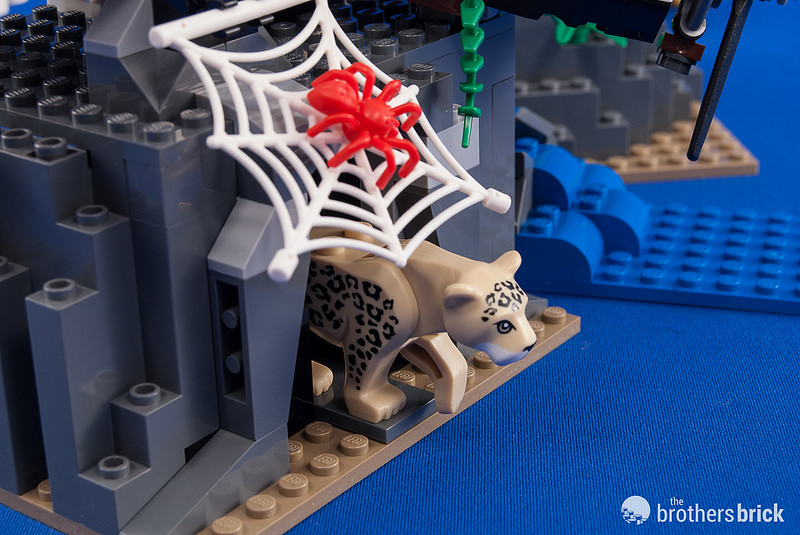 This set is definitely a play set, and with so many individual elements isn’t well suited for display (if that’s your LEGO collecting preference). The set includes an amphibious vehicle, a large expedition truck, a helicopter with pontoons for water landing, a kayak, a motorcycle, a carnivorous plant, and finally, the temple and plane wreck. 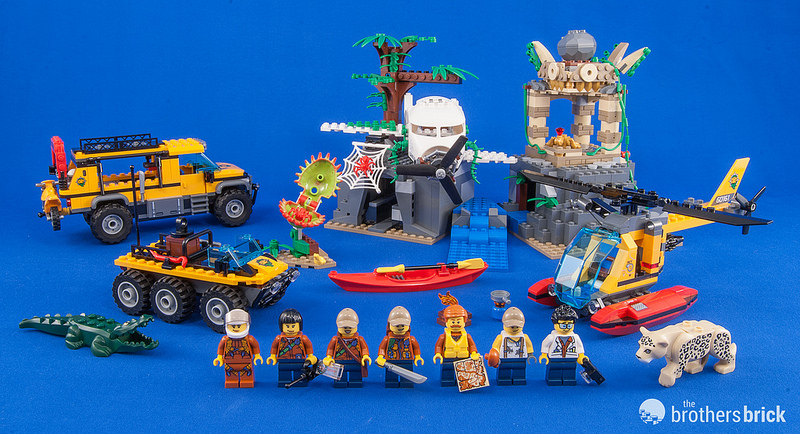 The back of the main model shows just how much of a play set this set really is intended to be: underneath the small hills are nothing but the inner workings where the hapless explorer falls through the trap into the river, and the mechanism for pushing the jaguar out of the cave. Ultimately, the back feels a bit unfinished. 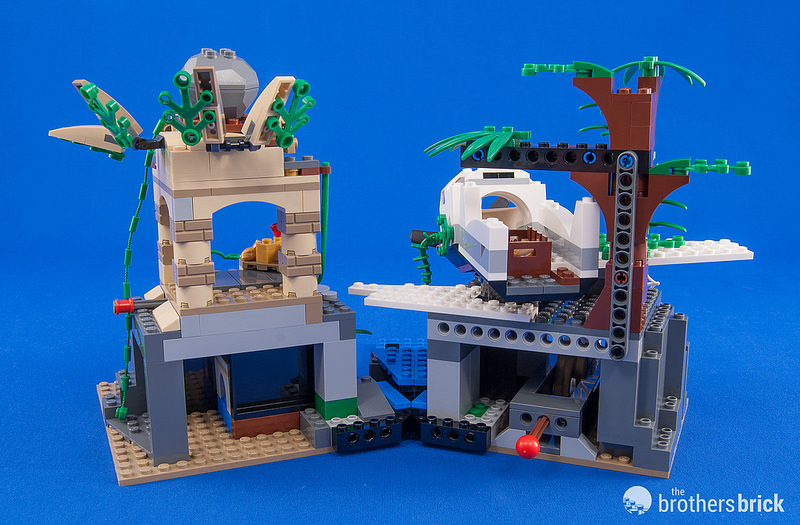 Overall, though, I have to admit the set is well designed, and the plane wreckage looks fantastic. Longtime readers will know I have a deep love for old, overgrown ruins and wreckage, and while this could certainly do with more vines, the plane itself looks appropriately worn and broken. It’s a nice addition to this exploration setting, complete with hidden treasure inside. 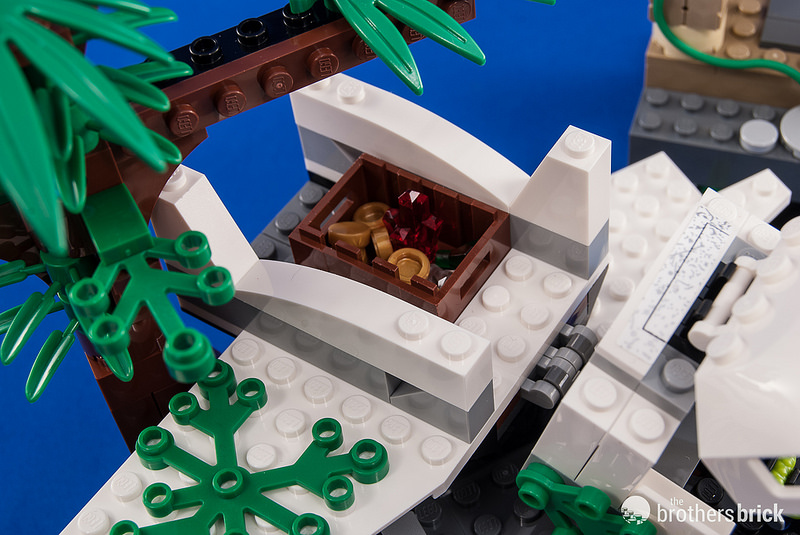 The temple is fun. I look forward to seeing a custom build of it someday. The dark tan and tan look good together, and I really like the face. My one quibble is that I would have liked to have seen more substance to the temple to give it more depth. 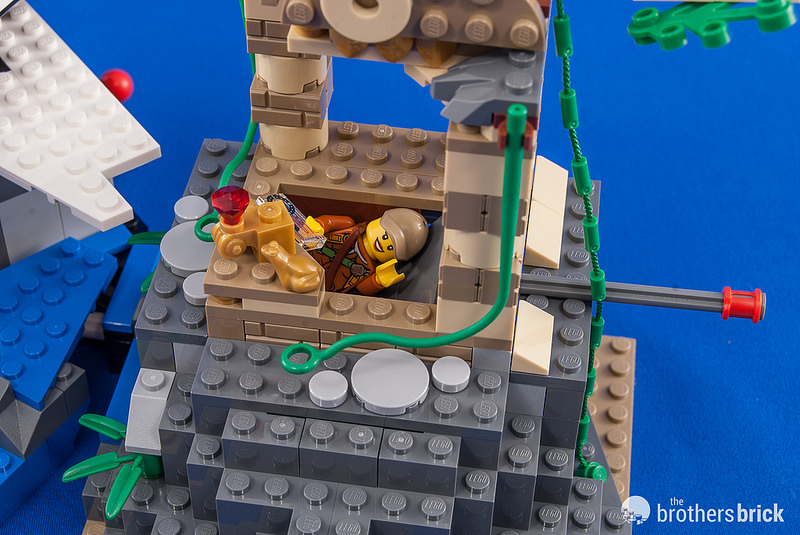 Despite the deep jungle location, these explorers will have no problem getting where they want to go. You’ve got flying things, floating things, driving things, and a thing that floats and drives…all largely painted in bright light orange. You will find all of the stickers on the sticker sheet are used with the vehicles (if we include the plane wreck as a vehicle). 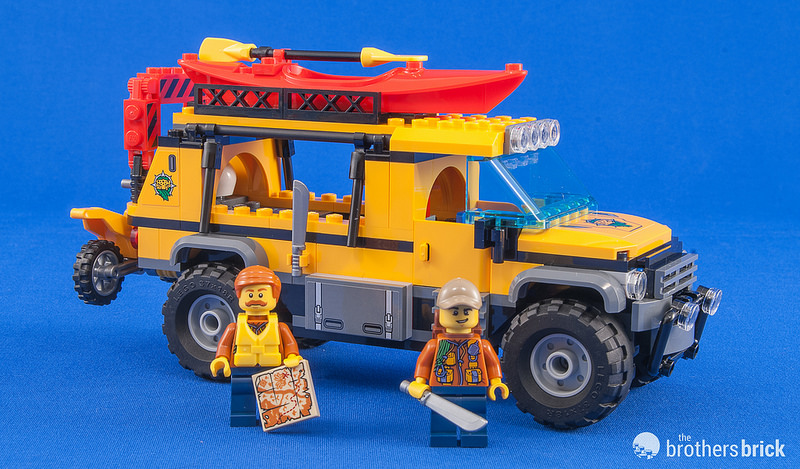 The large expedition truck seems to be the headquarters; it hauls the kayak and motorcycle, has a crane for heavy lifting, and features a lovely map inside (sadly, a sticker). The truck’s removable roof is a new element with the same profile as the slope used on the hood, finally providing an addition to that tiny family of elements. 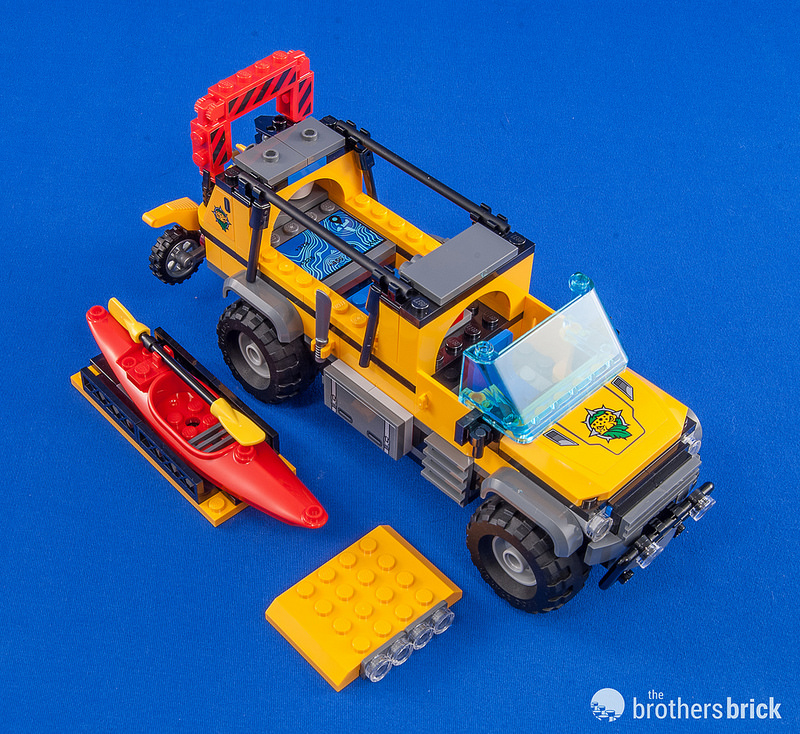 The hood features the jaguar emblem sticker, which is also found on the other vehicles. 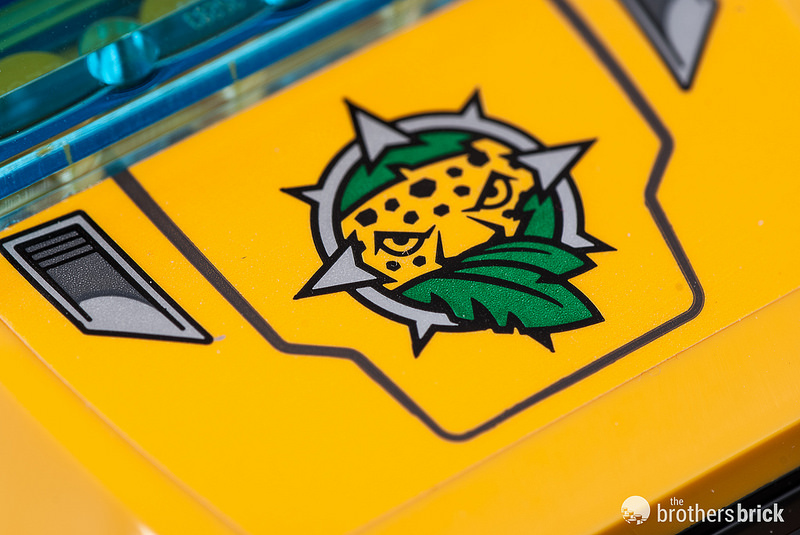 The kayak is new to the LEGO lineup this summer, along with the new oar paddles. It’s a cool new part, though one thing that wasn’t clear from the Toy Fair 2017 pictures is that the kayak’s hull tapers in more quickly in front and back than the top surface, giving it some odd geometry. The two yellow oars attach to a Bar 6-long, and aren’t quite symmetrical; one side of each blade is slightly angled. 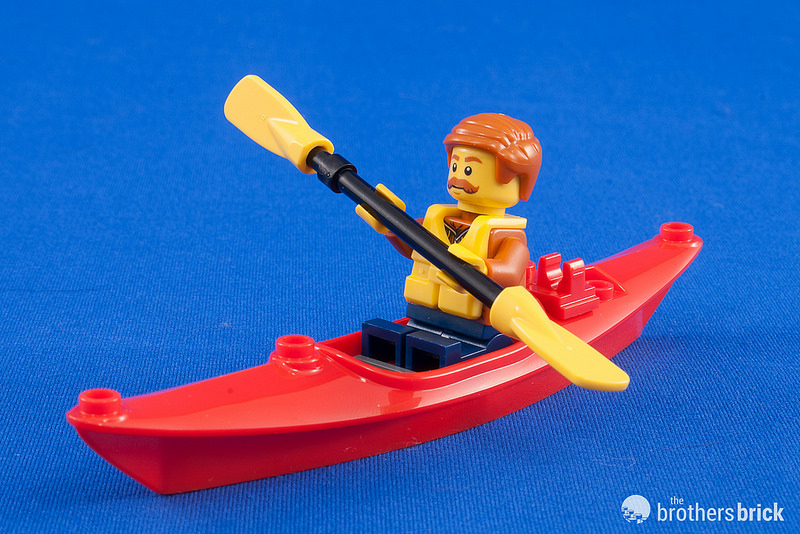 The motorcycle is a standard LEGO dirt-bike, with a bright light orange body. 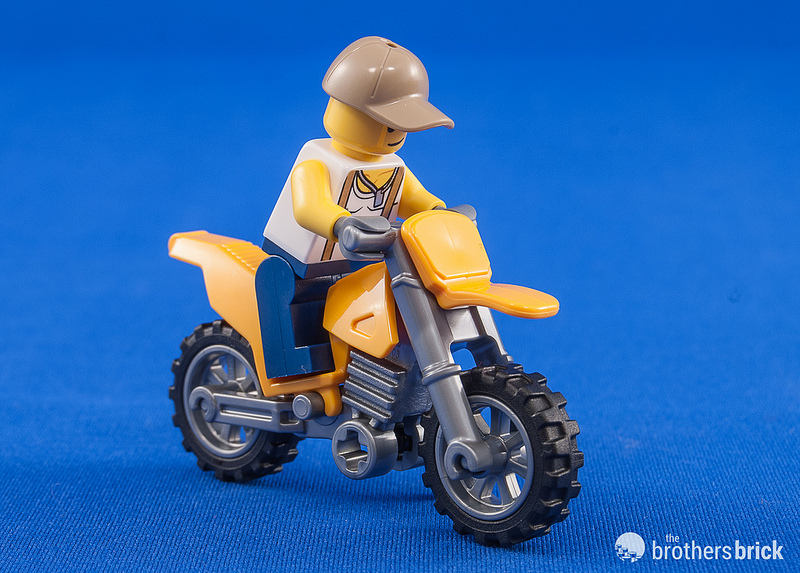 The little amphibious vehicle is solid and recognizable. It has a space on the back for cargo, with a box that can be loaded with the truck’s crane. 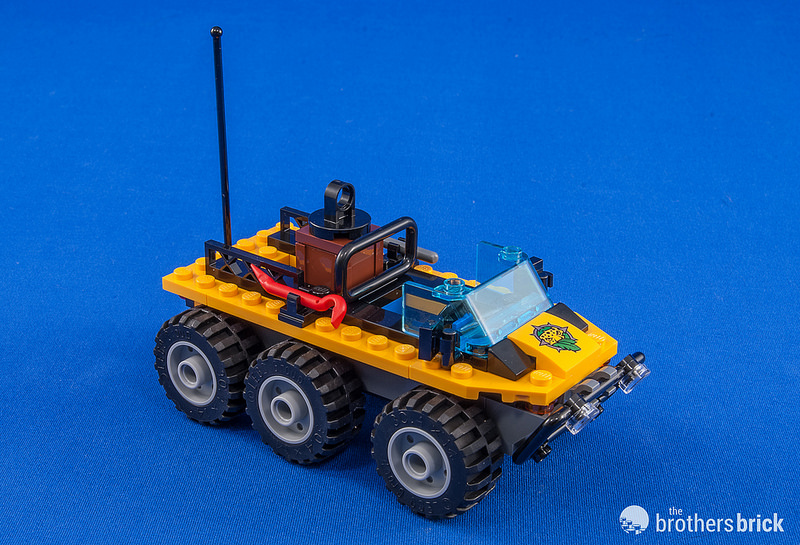 While also small and simple, I very much enjoyed building the helicopter. This single-passenger helicopter features a crane to haul out loot from the temple and plane wreckage, and has bright red pontoons for water landing. Here, I would have loved to have seen the decorations on the red 2×2 curved slope be printed. Stickers on curved parts are often difficult to place correctly. 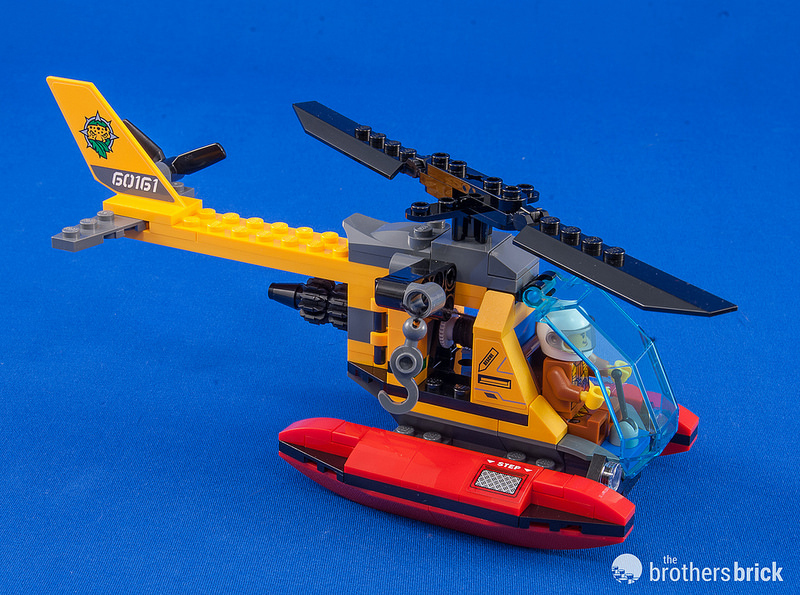 I’d like to introduce you to Audrey II. She’s hungry.

Audrey II is made up of two identical clam shell parts, dual molded with lime green and red. They are held together by a technic pin, and given friction with a white rubber band. Without assistance, she has two stable positions: open (feed me!) and closed. 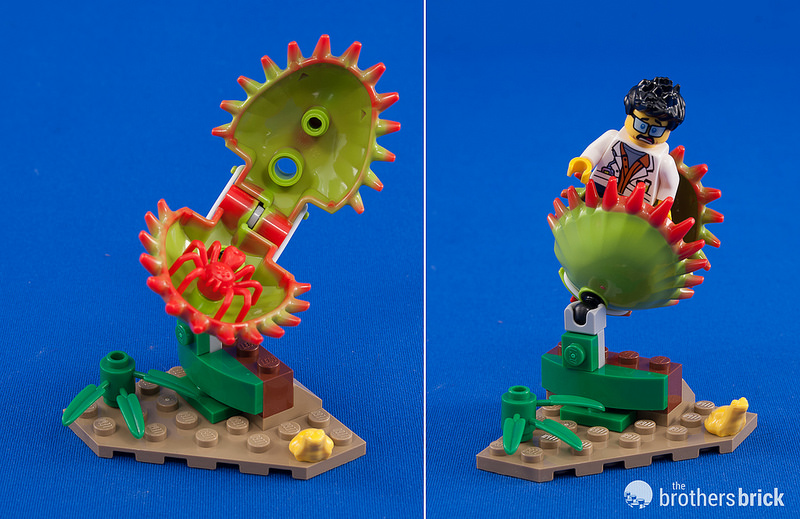 In addition to Audrey II, this set features a few new parts and a host of animals, including some newcomers to the zoo set I keep wishing LEGO would make.

The jaguar is just lovely. It’s articulated in the same manner as the updated horse, and has plenty of personality. It feels like it belongs in a minifig’s world without being cartoony or overdone. The big cat appears in other sets in the jungle line as a striped tiger and a black panther. 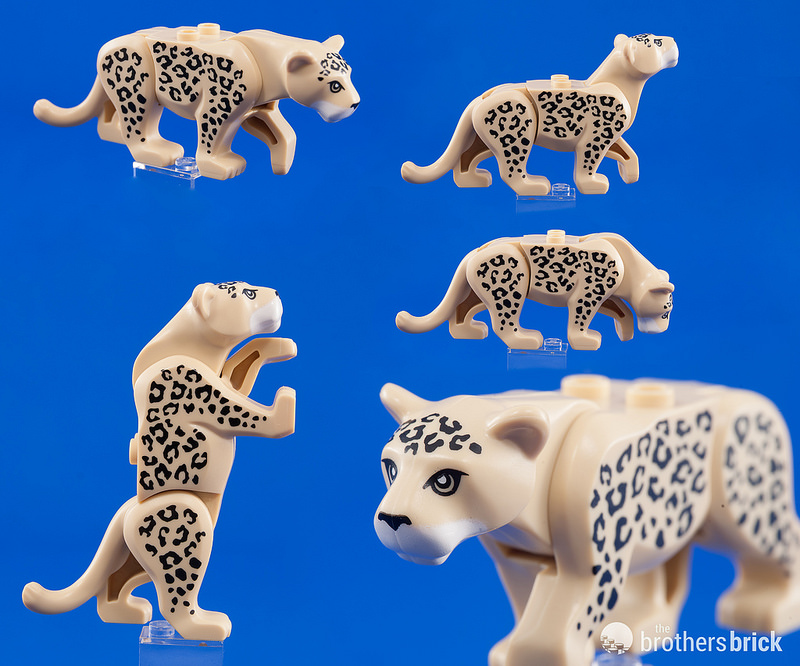 I hate this thing. I’m not overly fond of spiders to begin with, but this one looks just real enough from the corner of my eye that I flinched a few times building. (just wait til it comes in black! – ed.) You’re welcome to laugh at me. It’s two eyes shy of accurate, but the fact it has even six identifiable eyes is still pretty impressive. It’s a great update to the classic spider, unless you’re arachnophobic. 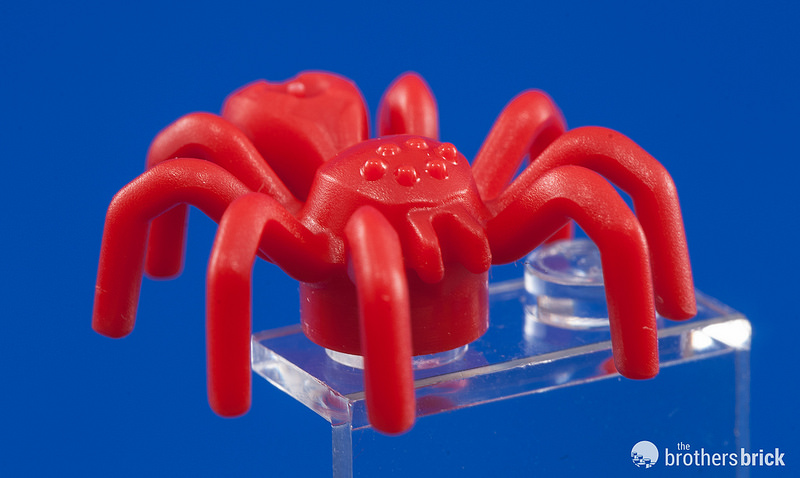 Turning away from the menagerie now, let’s look at this new cockpit, which comes in two halves. At best guess, we figure the crashed plane is modeled after the Ford Trimotor. We are not aviation experts, so if you have a guess, let us know in the comments. The new cockpit could be easily used to make yourself a DC-3, too. There’s no glass insert included, but I’d guess that’s more because it’s a crashed plane rather than LEGO failing to design one. 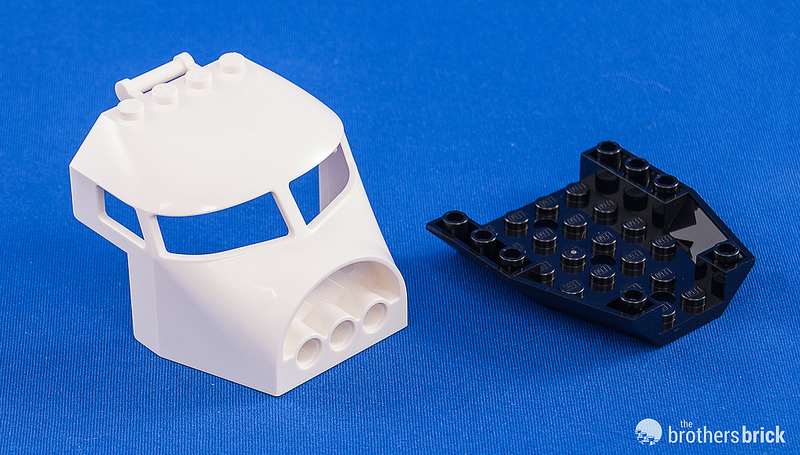 If earth-bound planes aren’t your thing, it also has excellent shaping for a space shuttle nose, with a perfect 4×4-stud round front with a centered axle hole. Given the scale, it may be more accurate for an experimental ship like Sierra Nevada’s Dream Chaser. 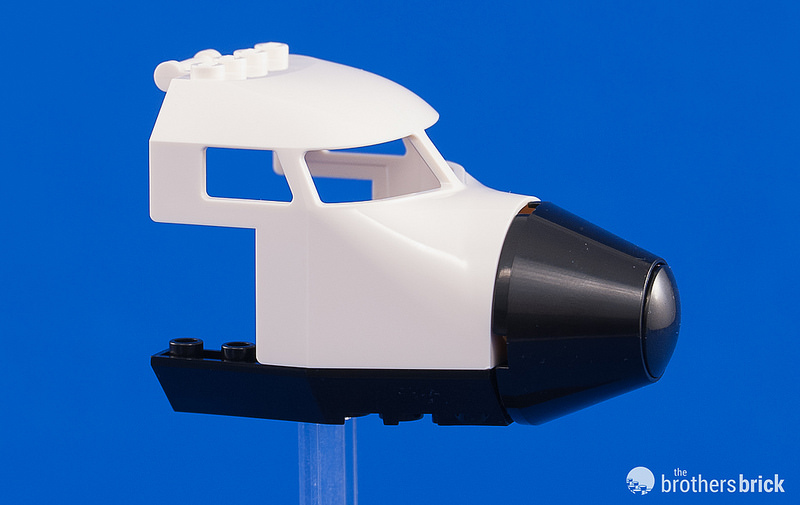 To help with jungle exploration, LEGO has helpfully provided a machete. This new minifig utensil is included in pearl sliver. You receive three in the set, counting one extra.

While the underlying elements aren’t new, there are two fabulous new printed tiles in the set. A clear 1×2 tile is printed as a compass (which reminds me strongly of the classic Boy Scouts compass); and a tan 2×2 tile is printed with a new map. This includes a giant red X at the temple, marking the doomed plane’s treasure. 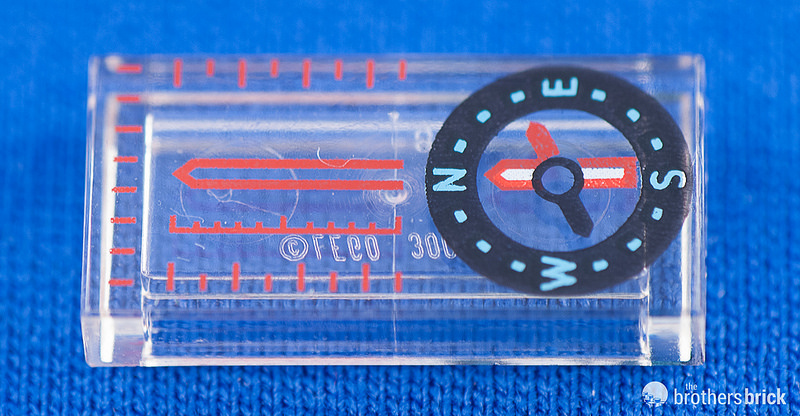 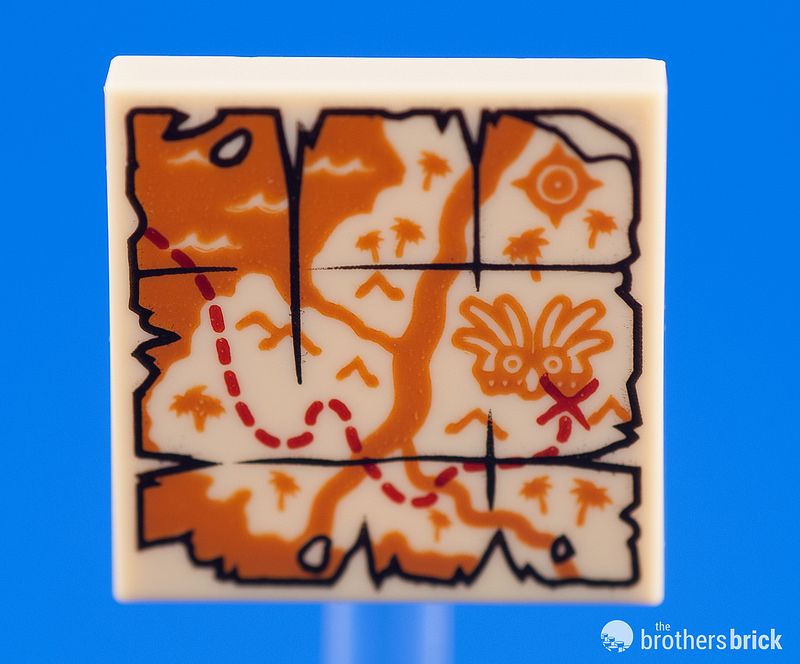 The minifigures in this set are fantastic. You receive seven minifigures (three women, four men) who are each unique and highly useful. Included are five expedition employees, one mechanic, and a scientist.

Of the seven minifigures, only two have dual-sided heads: one expedition employee, and the scientist. The others are single-sided printing, and all torsos are printed. Only the helicopter pilot’s legs are printed. Everyone else gets blue jeans. 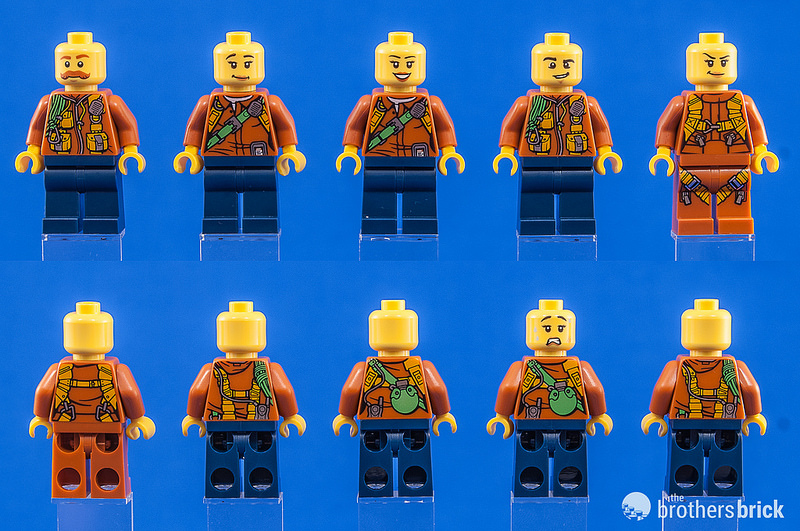 The scientist is appropriately nerdy (and bears an uncanny resemblance to Seymour with his tousled black hair and classes), with full test tubes in his coat pocket. As for the mechanic, that really is a wrench in his pocket. 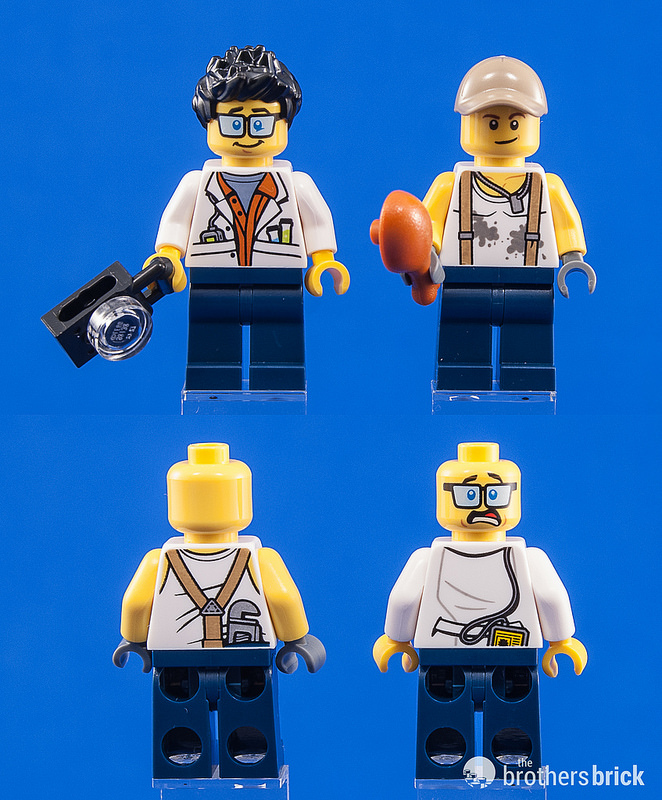 At the end of the day, you really can’t go terribly wrong with City subthemes, and this jungle line has even more promise than most. The Jungle Exploration Site has an interesting setting and fantastic minifigs and a plethora of vehicles. It’s not challenging to build, but if you’re a fan of bright light orange, there’s plenty to be found here.

But then there’s the price: $119.99 for 813 pieces. At a price-per-part of 15 cents, it’s a bit steep, especially considering there are no unusually large elements or electronics which are often responsible for a higher than average price-per-piece ratio. If you are super enthusiastic about having the jaguar, minifigs, the other new elements, or maybe even the bright light orange, then go for it! If the price doesn’t deter you, you won’t be disappointed in the build. Otherwise, wait for a sale.

60161 Jungle Exploration Site is currently available from the LEGO Shop Online for $119.99.