As we reported from Toy Fair in February, the April 2017 LEGO Architecture releases include a redesigned Solomon R. Guggenheim Museum (21035). The new LEGO Guggenheim includes 744 pieces and retails for $79.99. 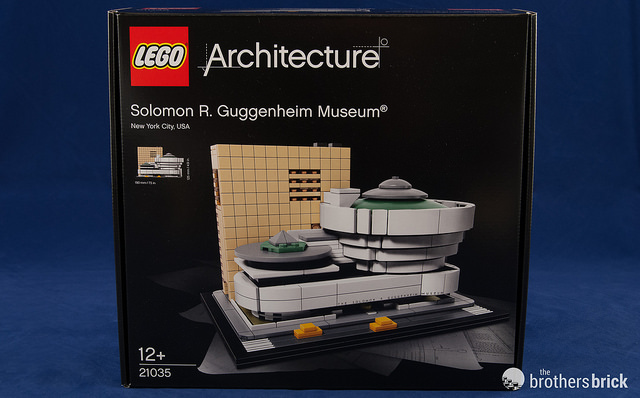 This latest Guggenheim is a new edition of an earlier LEGO Architecture set released in 2009. We’ll compare the two versions later in this review.

As with other LEGO Architecture sets, the set comes in a sturdy storage box that includes unnumbered bags and a perfect-bound instruction booklet. The instruction booklet includes details about the real-life building and its architect, the incomparable Frank Lloyd Wright. 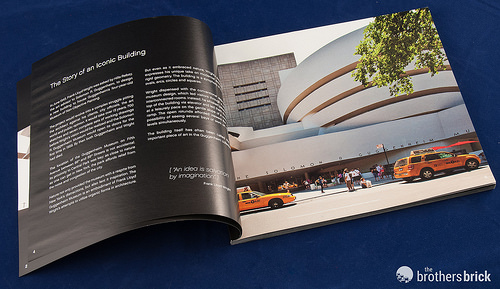 I like to build my LEGO Architecture and LEGO Ideas sets in the box, dumping all the unnumbered bags into the box and sitting comfortably on the couch with the box in my lap. This proved a grave error with this rather large set, probably adding a full hour to my build time. Oh well, it proved a pleasant evening nevertheless.

The build itself is full of complex building techniques that take advantage of SNOT geometry and half-stud-offset connections. The adjoining office tower (part of Wright’s original design intended to provide a contrasting backdrop for the main museum building, but not actually built until 1992) may look plain once completed, but includes some serious SNOT to achieve the banks of windows and exterior facing. 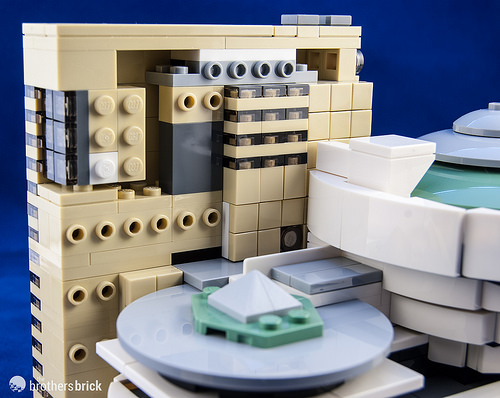 Similarly, the rotunda structure is built from outward-facing arch and bow bricks. Each level of the building is larger than the one below it, and this necessitates unique LEGO geometries for each floor. 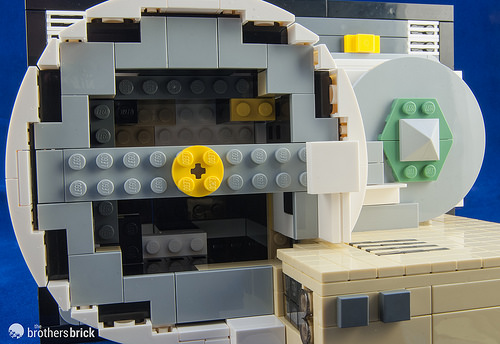 The museum’s signage is printed — there are no stickers in the set. The text “The Solomon R. Guggenheim Museum” spans a 1×8 tile and a 2×2 rounded slope. 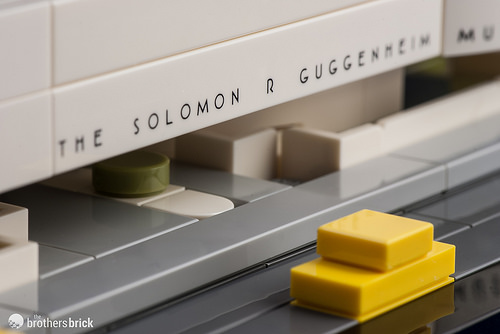 Commissioned in 1943 but not completed until 1959, the Guggenheim is one of the most iconic landmarks in New York City. Whenever I visit New York, I spend nearly all my time in art museums (and ramen joints), so after I’d been to the Met and MoMA twice each, I finally hit the Guggenheim. The museum was hosting a temporary exhibition of contemporary pieces created from found objects. In other words, the Guggenheim was full of garbage. After the Met and MoMA, the art inside the museum was a little disappointing, but experiencing Frank Lloyd Wright’s vision of a multi-story structure with a continuous ramp was still a highlight for that trip. The LEGO Guggenheim accurately captures the awe-inspiring design. 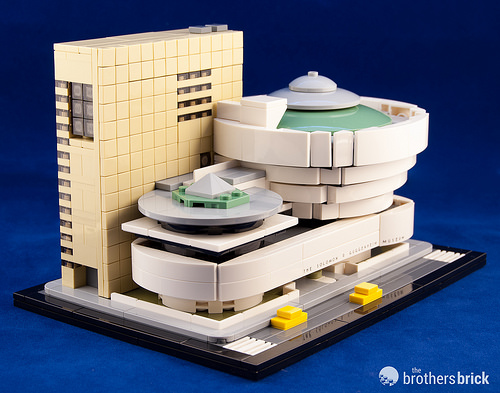 This new set is radically more accurate than the 2009 version, which simply stacked large radar dishes for all four circular sections of the building. The new version is also much larger — built from 744 pieces rather than 208 pieces, it’s nearly twice as deep and a third wider. 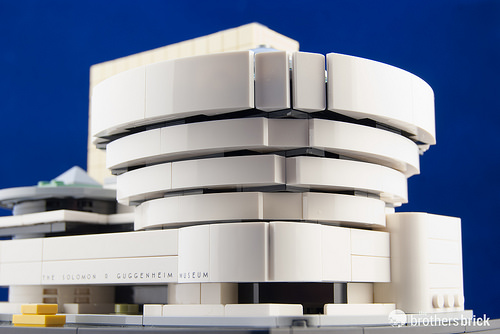 The higher part count lends itself to brick-built solutions for both the main museum structure and the office tower. The ground level even includes the low wall surrounding the below-ground area between the sidewalk and the museum building. 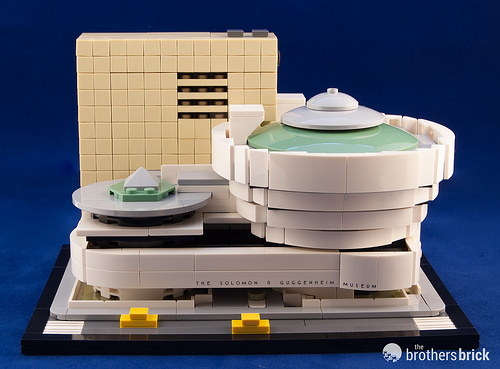 Details abound even on the street, with crosswalks across Fifth Avenue to Central Park, and taxis heading south toward Times Square. 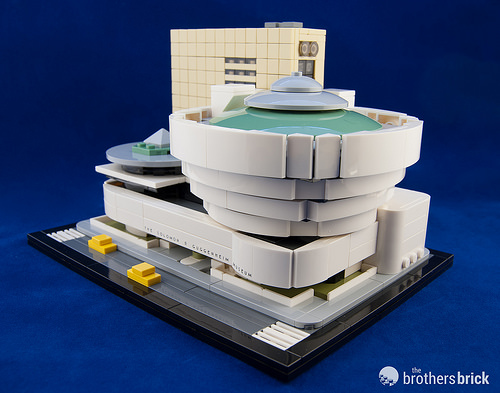 Even the rear of the building includes the right details. The elevator shaft takes museum visitors to the top of the rotunda, from whence they can walk down the slope at a leisurely pace enjoying an assemblage of found objects. 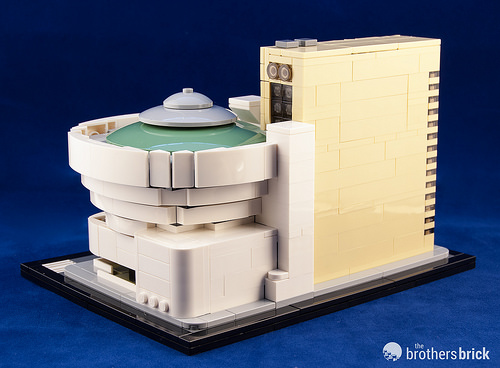 Unlike the 2009 edition, the fully detailed rotunda includes realistic sand green details that lend big pops of color to the LEGO version. (The 2009 LEGO Guggenheim included parts in only three colors — black, tan, and white!) 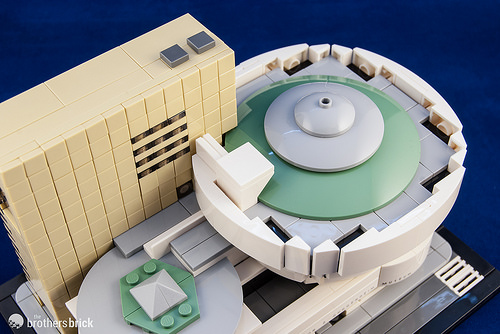 Whether you’ve had the opportunity to visit the real-life landmark or not, the Guggenheim Museum is an amazing architectural icon envisioned by one of the greatest architects of all time. The new LEGO Architecture version of Frank Lloyd Wright’s masterpiece is a dramatic improvement over its predecessor of 8 years ago, helped by more than triple the LEGO pieces. 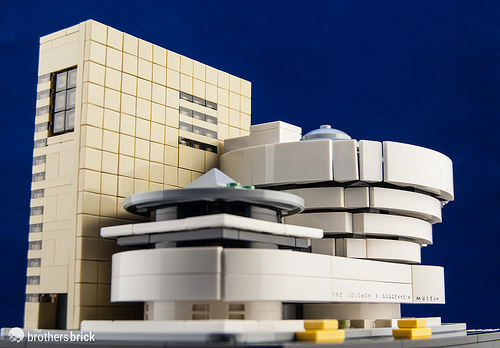 21035 Solomon R. Guggenheim Museum truly does justice to this amazing structure, with a rather brain-bending build that’s full of numerous details absent from the previous version, from taxis on the street to air conditioning units on the modern office tower’s rooftop — even a rooftop balcony with a doorway connecting from the new office building. 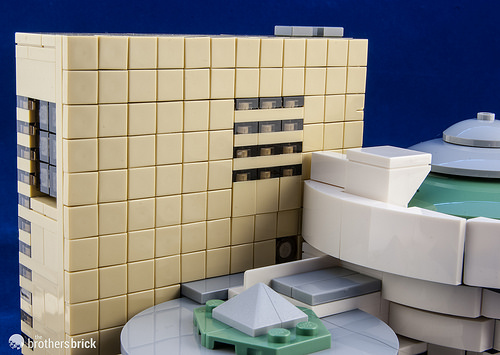 Generally intended for tourists and collectors, LEGO Architecture sets are almost always priced higher than the average LEGO Creator or even LEGO Star Wars set, from a parts-per-price standpoint. In contrast, this set is priced quite fairly at $79.99 for 744 pieces, though admittedly more than a hundred of those pieces are just 1×1 tan tiles.

With an enjoyable build that results in a very pleasing finished structure, I can heartily recommend this set for both longtime LEGO Architecture fans and LEGO builders more broadly.