This week our travels take us to South Bohemia, in the Czech Republic. There we tracked down František Hajdekr, a builder known for his small builds of big vehicles and equipment of all kinds. František lives in the town of Bavorov, with his wife and three sons. He is 39 years old, teaches high school and runs his own Youtube channel, which is loaded with lots of “how-to” LEGO videos. Let’s explore his mind a bit, shall we? 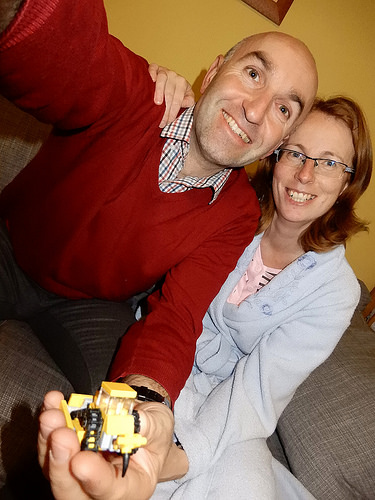 TBB: Hello, František! How you got into LEGO and what was your first set?

František: My first set was the classic Town 6621 Fire Truck from 1984. And for a long time it was the only set that I had. Lego was not so available in my country, so I built mainly with different building blocks – Seva or metallic Merkur (Czech made).

In 2011, I met my wife and her son. He liked trains so I started to build trains with different bricks, wheels and colors. Gradually I started to buy new bricks. At the beginning all my bricks fit in one small box. Nowadays is it one Regal storage box with organizers, as well as two cardboard boxes with unsorted bricks. Waiting for the holidays to sort them out!

TBB: The sorting is never done! You have become particularly known for your incredible small-scale vehicles. What is it about these vehicles that makes you want to build them in LEGO and what keeps you coming back to the brick?

František: There are some reasons why I prefer small and simple models: #1, Not enough bricks – if I wanted to make a two-bricks model, I am sure one brick will be missing! #2, Not enough time.

I also like minimalist design (and minimalist music and architecture) and I share the idea of Ezra Pound and Adolf Loos: work (whatever it is) should contain only necessary parts – anything over is a sin.

I am just an amateur and I am not able, nor skilled and patient enough to build complicated models, like Madoca’s for example.
I think my easier models could be an inspiration for other amateur builders like me.

Small-scale vehicles are not my only favorite theme – I like building Lego Technic motorbikes and Technic tools, unfortunately it takes more time and time is not on my side!

And why do I keep back to Lego? There are few reasons why – it is partly way of my self-realization. The other reasons are positive feedback, sometimes inspiration from some of my subscribers and sometimes a challenge, if I am able to puzzle out certain problems or ideas.

And to be honest I have to admit that it is also the benefit from YouTube. But I am sure I would build even without the monetization, but probably not so frequently.

TBB: That’s understandable. How do you decide what scale or techniques you are going to use in a new build? Is there a lot of research involved?

František: Scale depends on theme and functionality, which I want to fit into the model. I sometimes change it during a building process, when I see it cannot be included into such small scale or if I see that the bigger scale is too talkative.

1. I search for photos and videos of the thing I want to build – frame, suspension, side and bottom views.

2. I try to find a solution without bricks. I sometimes use LDD, but I usually find the solution at night, before I fall asleep or early in the morning before I wake up.

3. I build – but very often I have to start from the beginning, because the first try is a dead-end street.

TBB: That is a nice, simple process. Are there any of your builds of which you are especially proud?

František: Probably some newer builds: the Jawa 350 (there are some 3D-printed parts, so it is not pure Lego model) or my motorized chainsaw.

TBB: Those are great models. Which was your most difficult build?

František: Maybe some of my Lego Technic vehicles, but I cannot point at particular one. I usually try to fit as much functionality into a small model as possible, and it is sometimes a problem for me.

TBB: That makes sense. Have you been influenced by any other builders?

František: My first inspiration was creations designed by Robert Heim – brilliant trucks, cranes, nice parts usage, big functionality in a small scale. Later, when I explored Lego Technic it was creations from Nico71. Of course, I have to name Madoca1977, his works are simply genius – what a shame they are not official Lego sets. And Angka Utama is also one of my favorites builders – very original creations. There are so many great designers in the world, and in the light of their work, I have to say I still have a lot to learn about Lego.

Maybe it is heresy (so said Sariel in one of his videos – also one of my favorite builders), but I like to use 3D printed parts. So I would like to mention Efferman, whose designed parts are very useful and Lego designers should take inspiration from it.

TBB: That is a list of very impressive builders. How important is the LEGO fan community to you and your builds?

TBB: Your YouTube videos are great! If LEGO was food, which piece or color would taste the best?

TBB: Ah, yes, so chewy! If you owned the LEGO company, what would you make them do?

Also more bricks with no studs on top…and leave themes like Chima!

TBB: Thank you for taking time with us! What is waiting over the horizon? What is the next big adventure for František Hajdekr?

František: Now I am waiting for delivery of the BuWizz. And plans? Maybe a Lego Technic Velorex.
Or if you mean adventures without Lego, it could be a fourth child!