Engine Company 10 and Ladder Company 10 of the New York Fire Department were among the first units to respond to the September 11, 2001 terrorist attack. Located across the street from the World Trade Center, its firefighters rushed to rescue survivors during those first few terrible and confusing moments. By the end of the day, several of the station’s firefighters were dead and many others wounded. Builder sponki25 memorializes these brave men and women in LEGO form with this recreation of a truck from Engine Company 10: 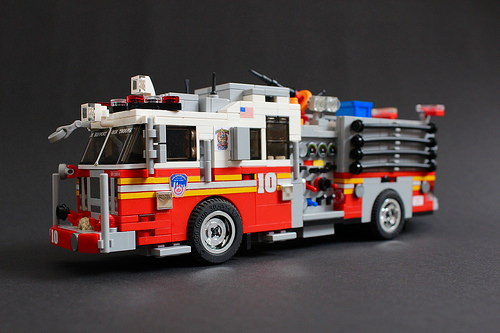 There’s a lot to appreciate in this model besides its significance to one of the United State’s darkest days. The accurately detailed pump panel and the shaping of the canopy are particular highlights here. The stickers do a nice job of bringing the model to life, though the side yellow and white stripping could have been done just as well with LEGO plates. That aside, this is a wonderful model and does well to remember those who gave their lives saving others.

3 comments on “Some people run from problems, others run to them”