The news that Si-BORED industries has just released an exciting new edition to their drone lineup has been announced by Canadian builder Simon Liu. The Grunzen drone comes with the tagline, “This all-purpose military unit has been built ground-up to exceed all your combat requirements”. These seem to be fantastically poseable LEGO drones, with more joints than a West coast state after cannabis legalisation. I love the joints that Simon has designed, firstly for the knees using a 1×1 plate with clip as the pivot point, and then the shoulder/elbow joints which ingeniously use a droid torso. 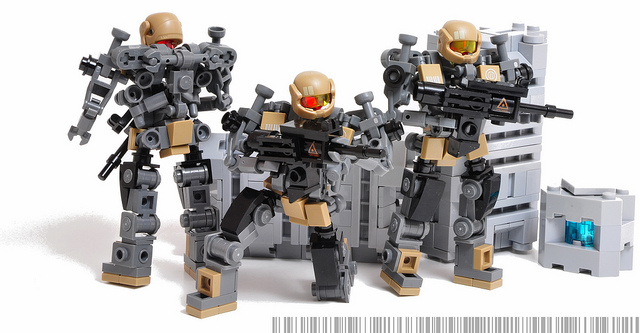 For Star Wars fans, the tan helmets would quickly be recognised as belonging to the Star Wars resistance trooper minifigures from Episode 7. These are great helmets and work perfectly with the colouring and style of Simon’s drones.