If you walk along Front West Street in downtown Toronto, Ontario you will see the impressive Fairmont Royal York Hotel. On June 11, 1929, the hotel officially opened. The Royal York changed names and ownership a few times since its humble beginnings as the Ontario Terrace, which consisted of four brick houses, in 1843.  Jeff Van Winden has captured the architectural essence of the hotel in LEGO microscale. The sense of scale is emphasised with the busting street below with adorable little microscale vehicles. 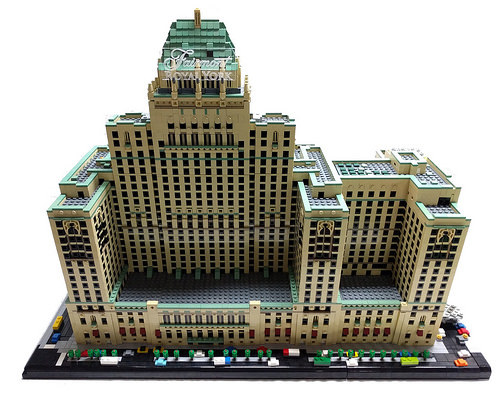 I particular like Jeff’s clever solution to the intricate arched windows on the three main blocks at the front with this upturned minifigure basketball stand.  Just be sure to book early if the Royal Family are in town, Queen Elizabeth usually has an entire floor reserved for her and her entourage and occupies the Royal Suite herself.