LEGO’s latest set in the Creator theme is 31065 Park Street Townhouse, which was recently released in both the UK and the US.  This set contains 566 pieces and retails at UK: £44.99 / US: $49.99 / EU: €49.99. The main build is the townhouse, but there are alternative instructions for a city café and a suburban home. The set comes with 2 minifigures, a moped, and the parts to build a little blue bird and a white dog. This type of Creator set  is often called a “mini modular” and interestingly one of the images at the back of the first instruction booklet shows this set linked with 31050 Corner Deli to form a mini street scene. Other examples of so-called mini modulars include 31026 Bike Shop & Café or 31036 Toy and Grocery Shop, both of which are now retired. 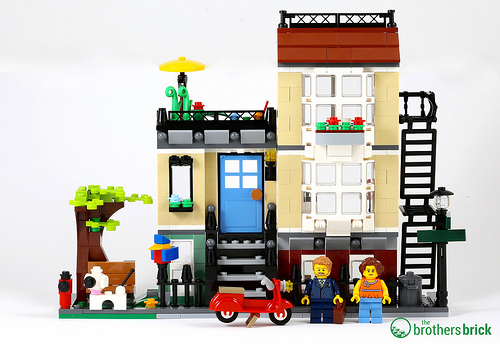 There is a separate set of instructions for each of the builds, no stickers in this set, and no printed parts within the 7 unnumbered bags. (At least I think it was 7 bags — apologies as I have a bad habit of just opening all the bags into a pile to admire the beautiful colours and pieces…)

No larger baseplate is included, as these tend to only come with the Creator Expert Modulars now, but the selection of 9 mid-sized plates — 6×10, 6×14 and 8×8 plates — allows flexibility in the builds. The 566 pieces include a selection in a lovely spectrum of colours from sand green to medium blue and bright light orange providing delicious eye candy for the colours obsessed like me. 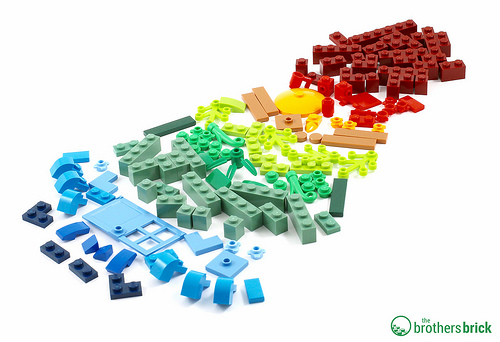 I decided to build all three build options in this set after looking at the box art. Each build had something that captured my attention: the townhouse has the patio and fire escape, the café has a little herb garden on the roof, and the suburban home has a greenhouse. All three builds are straightforward as you would expect for a set rated 8-12, and there are a few nice play features in each build for your 8-12 year old to enjoy. 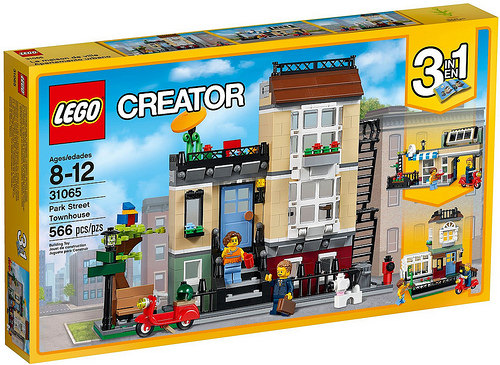 There are two minifigures and a red scooter included with this set, and I imagined the minifigures having different roles within the townhouse/café/suburban home builds. There is the girlfriend/waitress/wife minifigure who sports the orange torso and medium blue legs ensemble, and the businessman-eligible-bachelor/businessman-customer/businessman-husband with his dark blue pinstripe suit, briefcase, and thick dark tan wavy hair with beard to attract the ladies. 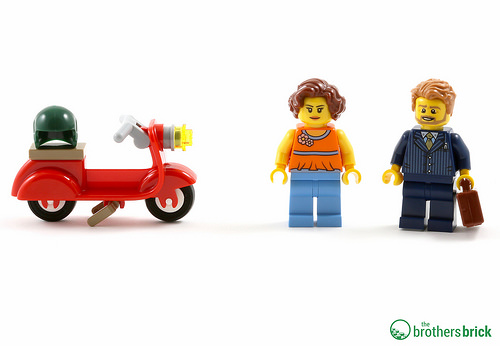 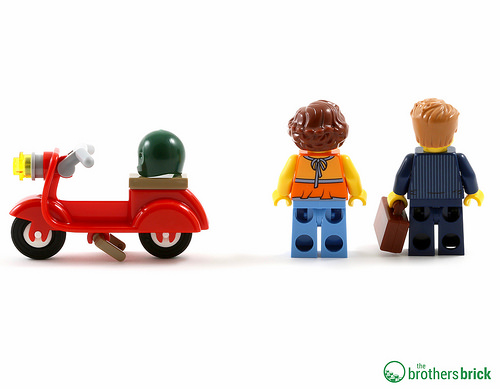 Also included are the brick-built dog that I thought was probably a poodle, and an unusual species of  red-breasted bluebird. The instructions for these are within the townhouse instruction booklet but it is possible to build them both as part of the cafe. However, only the bird can be built as part of the suburban home due to alternative parts use. I felt that the dog had a robodog feel to it that was slightly unnerving, partly due to its brick-built faceless form, and also the use of a “lever” as a tail. Often the lever is used to represent the antenna on remote-controlled toys within sets, and I have decided that RoboPoodle was performing some undercover surveillance within my scene. 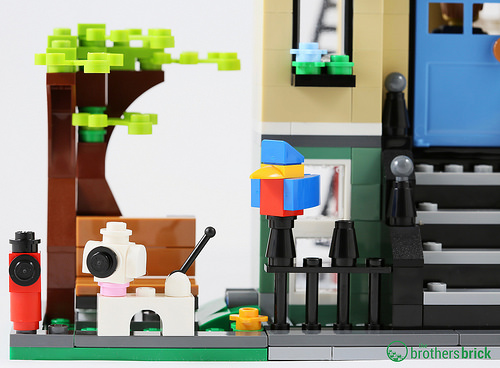 The townhouse is built on three levels with a central hinge to allow it to be opened for access to the rooms inside. It has a distinct bachelor pad feel rather than that of a family home.  This townhouse is obviously located in a city where the price per square foot is particularly high, as your minifigures will not be able to swing very many cats in these rooms. 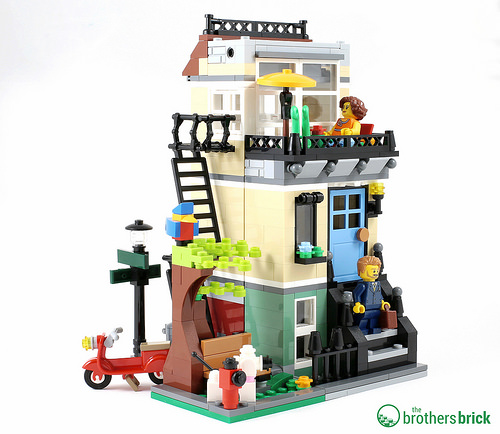 The ground level includes a small outside “garden” where the little dog can go for a wee and your businessman and his girlfriend can sit under the tree and listen to the birds. The house itself has a sitting room with a spacious seat for one minifigure and a television that has been built using mixel joint to allow the screen to rotate — just needs a PS4 to complete the gaming room! Be careful when closing your townhouse up as that fire gets very close to the seat, a definite fire hazard. 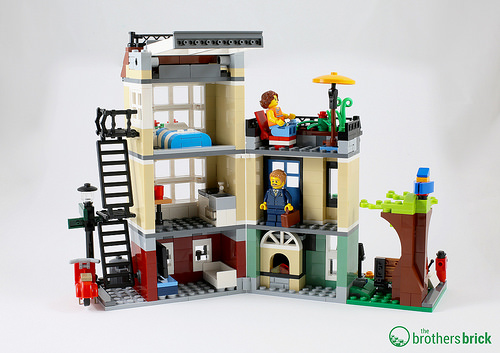 The cute little outside stairs lead up to the blue front door, and this means that your businessman bachelor enters straight into a little kitchen on the first floor. I liked the little sink but there’s not much else in here; he must eat takeaways mainly or is far too busy wining and dining his lady friends. The top floor has a bedroom with a cool window that swings up to allow access to the bed. When closed, the window acts as a glass partition, and it looks much nicer when the hinges are closed. 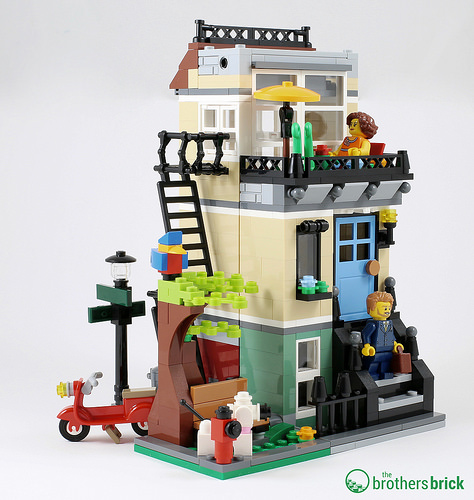 Another play feature is the fire escape ladders, which are accessed from the window with shutters in the bedroom. This is a reassuring addition given the fireplace issues I noted in the living room downstairs.  The fire escape ladders lead down to the garden bench and you can see that it allows a re-enactment of scenes from Romeo & Juliet. 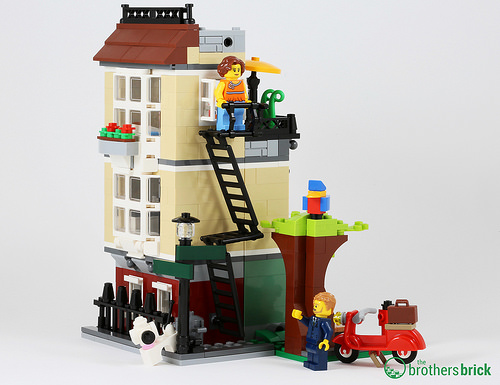 The café is a one story building with a  fenced-off outside garden and a small patio with a glass-fronted herb garden on the roof. 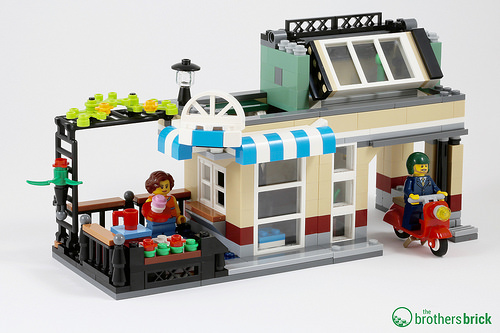 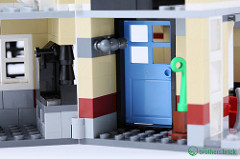 The little café has a kitchen area inside with a huge coffee machine. I think this is more of a coffee joint than a café, since there are no other food preparation areas. There is an undercover area for Mr. Businessman Customer to park his moped if the weather is inclement, but he will have to have his coffee under an umbrella as the seating areas are all outside. I like the use of the bar with ball placed in the wall behind the door. I imagine these coat hooks are handy to put customer’s jackets on when they enter the café.

The little garden for customers to sit in is cute with its fence and climbing plants, plus there are two rather comfy looking seats with padded cushions and a decoratively tiled floor. 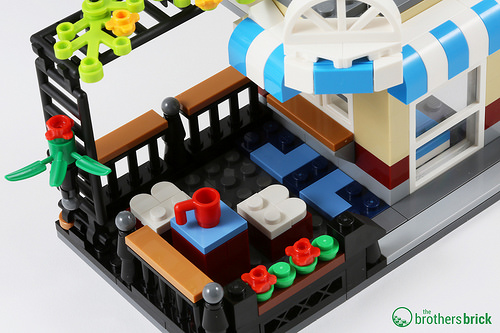 The waitress can serve 1×1 plate “cakes” (it’s a shame no printed cookies or cakes are included to entice our customers to the café) or simply pass them through the shuttered window if she is feeling a little too tired to walk outside. 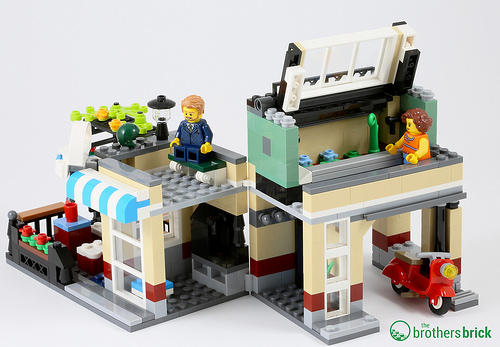 The patio on the roof is rather minimalist, but I do love the use of the white 1×1 brick with scroll (part 20310) for the bench legs — it gives a nice Italian marble look to the seat. The herb garden is cute and uses one of the large windows as a swinging glass roof to protect those herbs from the elements. There is even a little tapped water supply up here to give easy access to water for the plants — or perhaps it is for a customer who is stranded on the roof due to a lack of stairs or ladders. 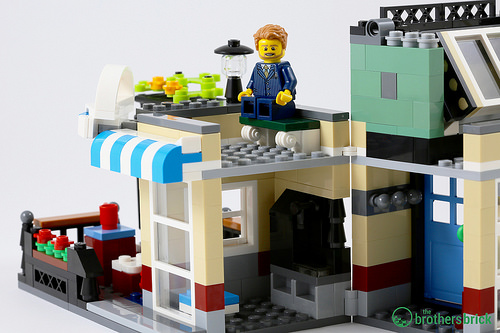 Clearly customers are not supposed to walk around to the back of the cafe, as the build doesn’t look particularly impressive from behind.  To be fair, this doesn’t really matter when the cafe is opened on its hinges since the back is hidden when opened for access to play inside. 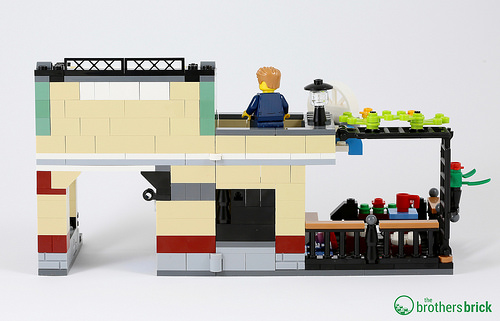 The final set of instructions is for a rather austere suburban home. I think that Mr. Business is married and lives in the suburbs. 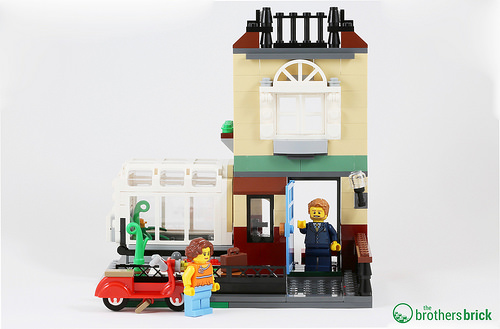 Sadly his wife has spent all their money on a large greenhouse rather than investing in a bed, kitchen, or television. The suburban home does not have a hinge action like the other two builds. Instead, the roof of the large greenhouse opens to allow access to the interior. 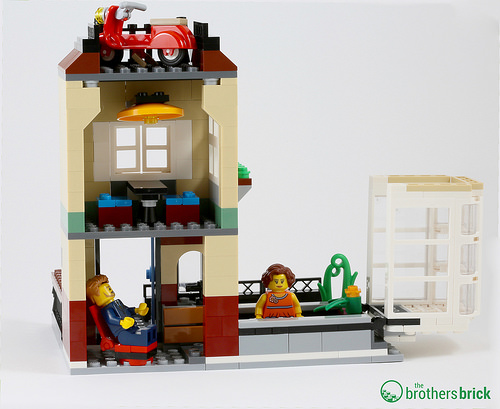 The front door opens and there is a seat. This is handy for the tired businessman, but I think that the novelty of coming home to just sit in a seat will quickly wear off. Upstairs (well up the hypothetical stairs) is a dining area with fancy swivel lamp, and there is a small rooftop with just enough space to store a moped.  Sadly the robo-poodle cannot be made in the suburban home as his tail has been reassigned as a switch for the water supply in the greenhouse. Finally, there is a small garden with a relatively large fountain as a central water feature, although with no evidence of actual water. This suburban home has been built by an architect with some odd priorities given that there is no bed, no kitchen, but a huge greenhouse that perhaps could have been a conservatory with a seat and a table (but the interior definitely suggests greenhouse to me). 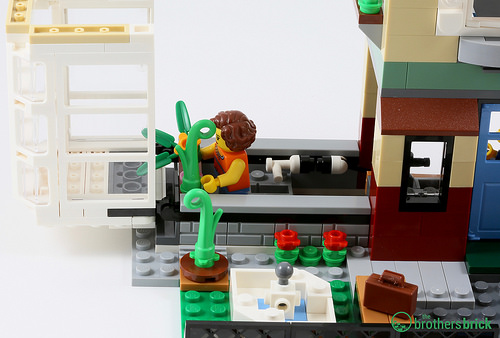 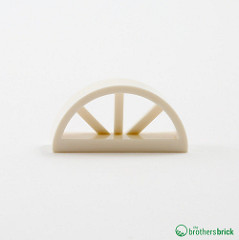 There is only one new part in this set that has not appeared in any previous sets to date — Part 6173064 White Bow Window 1 x 4 x 1.33 (20309). This part is also available in sand green, tan, and black, with black appearing as a new 2017 colour along with white. There is only one white bow window included in this set, so you will need to buy a lot of Park Street Townhouses to get a good supply of the white bow window.

I thought you may be interested to see how this newly recoloured part is used in the 3 builds.  In the townhouse, the bow window is placed inside the house forming a decorative mantelpiece above the fire. In both the café and the suburban home, the bow window is an external architectural feature as part of the café’s awning and as an arched window respectively.

The café’s awning is built around the corner of the building, and I particularly like the design solution to ensure that the bow window sits centered over the corner. A bar with towball (part 22484) sits on the roof within a 1×1 brick with single stud and then the bow window attaches using the mixel joint — a nice, simple, but effective solution. 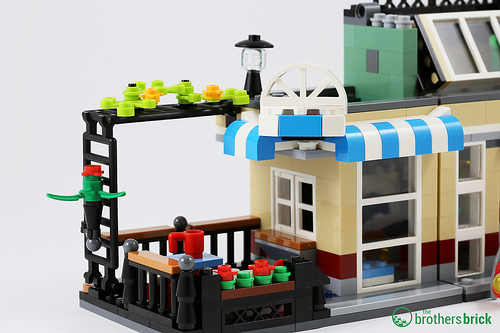 The quality of the builds varies, with the townhouse clearly the best in terms of design and, in my opinion, the most fun to build and take advantage of its play features. The café is cute and I like the way some of the parts have been recycled. For example, the fire-escape ladders become a frame for a climbing outdoor plant and the bed becomes a nice awning. The weakest build is definitely the suburban home, although I like the greenhouse design from the stacked train windscreens. Interestingly, the quality of the build was roughly inversely proportional to the pile of spare pieces left when each was completed. There were plenty of parts left to build an extension to the suburban home and allow a bed to fit, plus the café spares could easily have been turned into a flight of stairs to the roof. 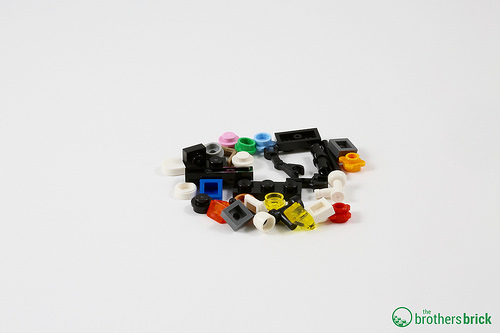 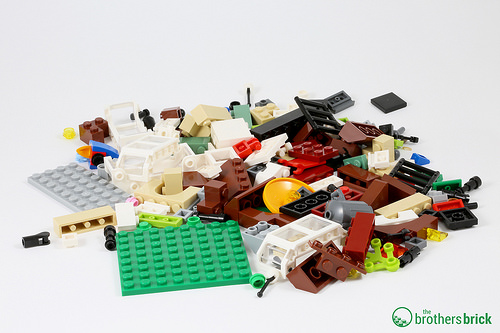 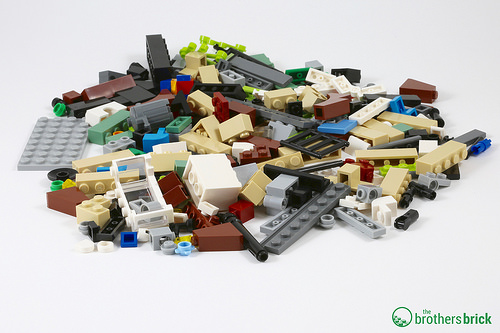 Overall this set provides a colourful mix of parts with three builds that each have a variety of play features, and that means that your pennies will stretch further when entertaining an 8-12 year old. There is a good mix of colourful parts in this set for fans that prefer to build and then utilise the parts for another build, but there are no rare or new parts supplied in a significant number. Sadly, the set only has 2 minifigures and no pre-made animals. I thought maybe a cat or dog plus another minifigure or two would have been ideal. I imagine this set being built and then added to using other sets, which seems to be the idea behind these mini modulars. So from that perspective, the set is spot on.