Which one is plastic and which one is paper? Takamichi irie has made a lovely little LEGO crane in the same style as the origami version. Traditionally, it was believed that if you folded 1000 origami cranes, your wish would come true – according to the 1797 book Sen Bazuru Orikake, which translates to “how to fold 1000 paper cranes” and contains instructions for how to make these special objects. 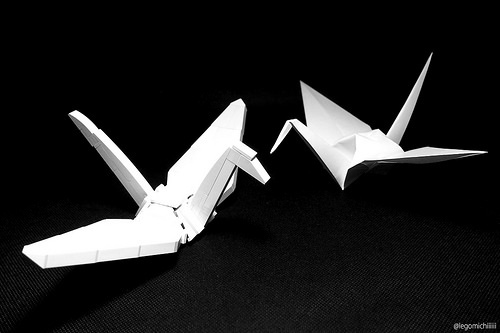 Takamichi’s LEGO version closely resembles the paper one next to it, and is a great way to present this seemingly simple build. A closer look at where the wings and neck join the main body suggests that this was not as simple as it first appears, and I imagine creating 1000 LEGO cranes would be a similar undertaking to folding 1000 paper cranes.

The folded crane has also become a symbol of hope and healing during tough times and therefore is often known as the “peace crane”. The touching story of Sadakos legacy is worth a read if you have a few spare minutes.