Now that some of the holiday craziness is past, we’re diving back into our coverage of The LEGO Batman Movie sets, and we’re kicking off with 70903 The Riddler Riddle Racer. The 254-piece set will be available Jan. 1, and will retail for $29.99 USD. It comes with a whopping five minifigures. 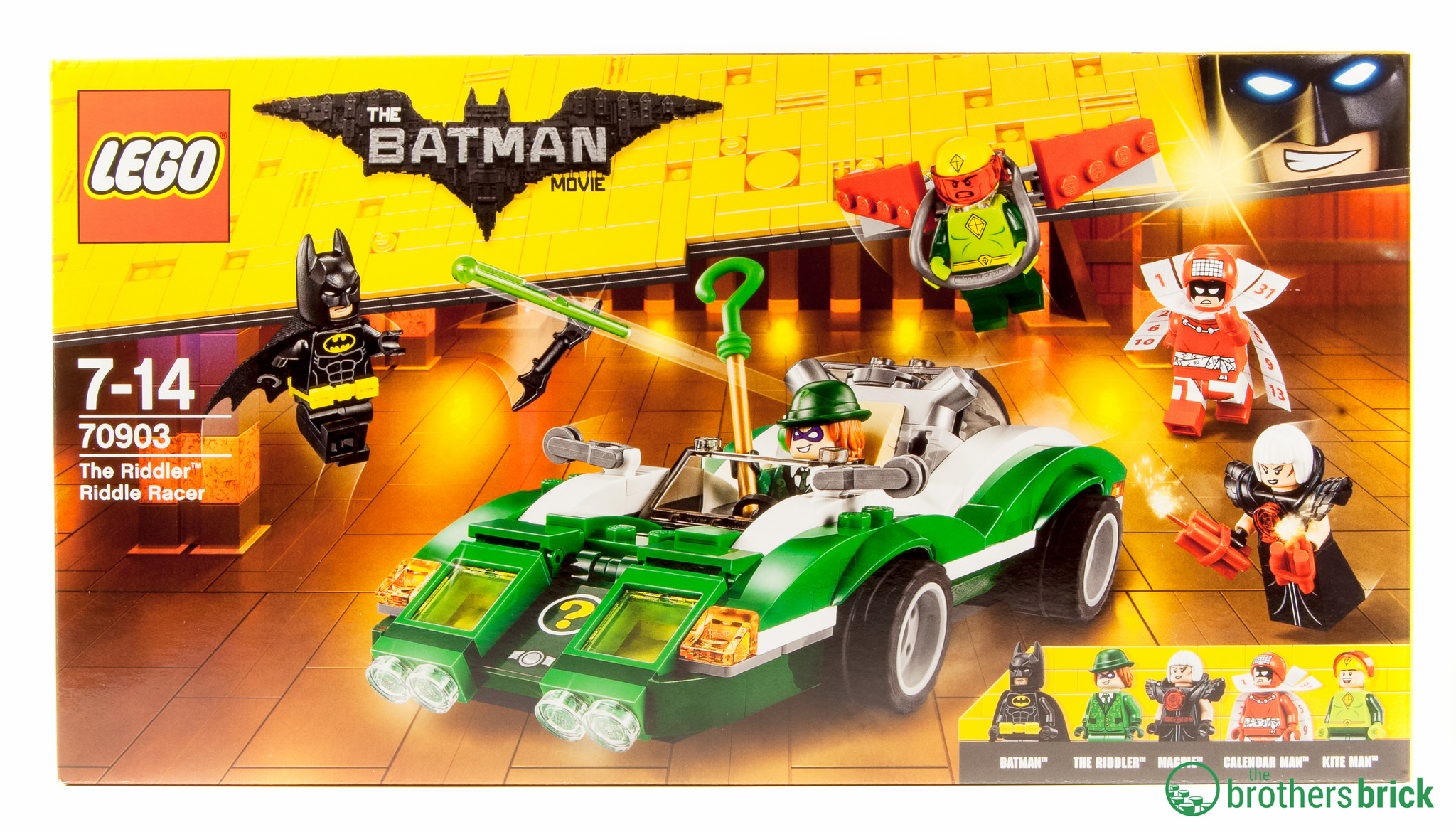 70903 The Riddler Riddle Racer is a flashy early ’60s Le Mans-style race car reminiscent of Speed Racer’s slick ride, the Mach 5, or any number of real vehicles. It’s got big headlights, exposed tailpipes, a transparent engine deck lid, and honestly looks good enough to be used as a regular sports car in a LEGO city. You’ll also get Batman, the Riddler, and three other villains.

The Riddle Racer’s 254 pieces are divided into two bags, and you’ll get a small sticker sheet for the instrument panel and Riddler emblem on the hood. The Riddler and Magpie are in Bag 1, while the other minifigures are in Bag 2, and the car is evenly split. The majority of the build is simple studs-up construction based on a black 6×16 plate. Interestingly, as you’re building, you’ll notice a large hole where the rear-mounted engine sits. We’ll get to that in a minute. 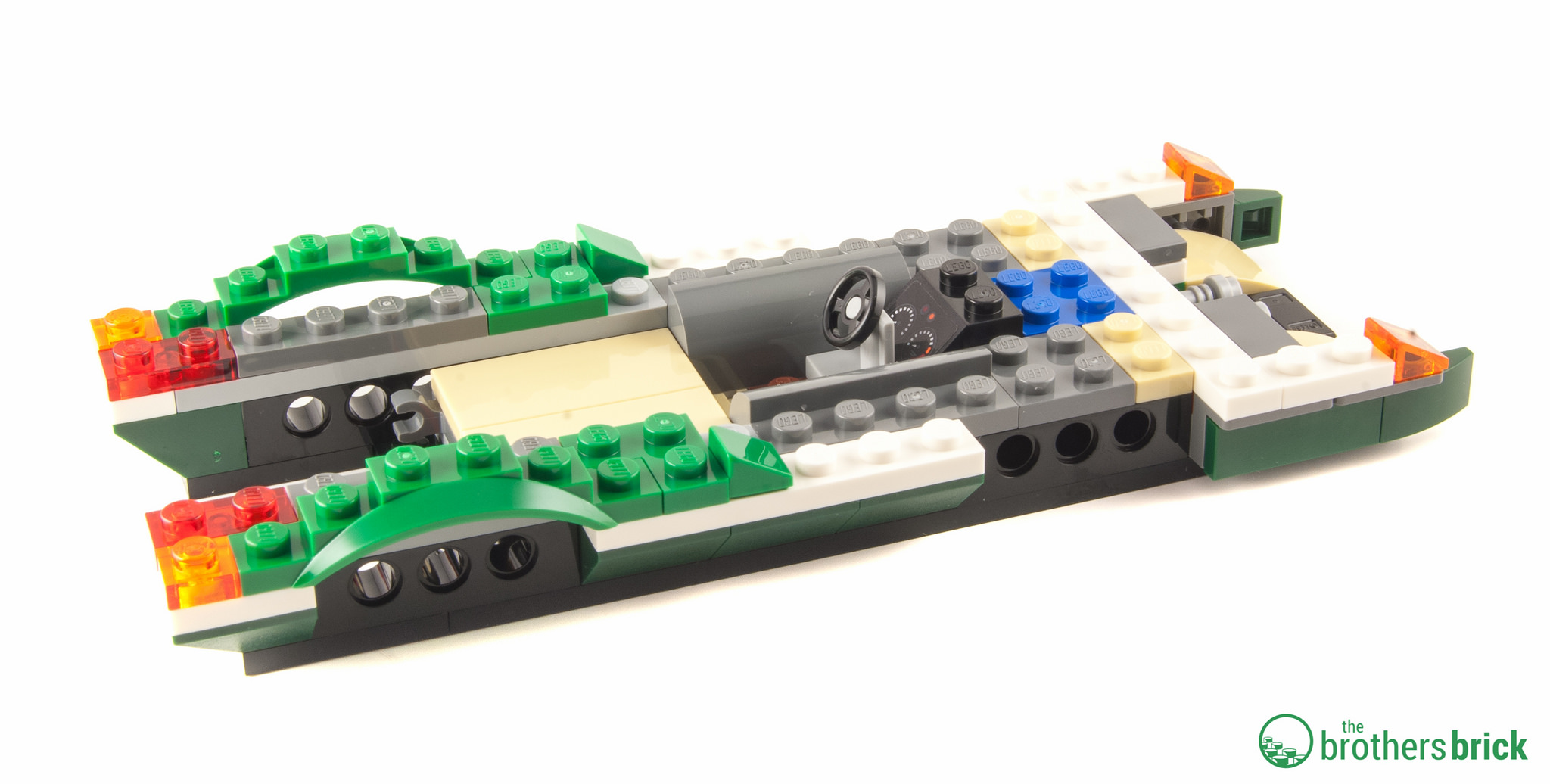 This is a great looking car. The underbody is dark green, and four white stripes run the length of the vehicle. The curved slopes work to perfectly evoke the clean lines of the Le Mans cars it’s based upon.

The 1x2x2 window panels with transparent yellow inserts is inspired, bringing to mind the huge headlights on a car like the Ford GT40. They’re mounted on hing bricks, with four clear 1×1 round tiles as running lights on the bottom. The elements beneath the windows are tan, to make the lights extra bright. The central flat lifts to reveal a small pair of guns (grey lightsaber handles). This is also the first time the 1x2x2 window frames have appeared in green, or the window panes in transparent yellow. Similarly, the top half of the hinge bricks the lights are mounted to have only ever appeared in green in a single set from 2003 and are currently averaging over $1 each on the aftermarket, so they make a welcome comeback here. 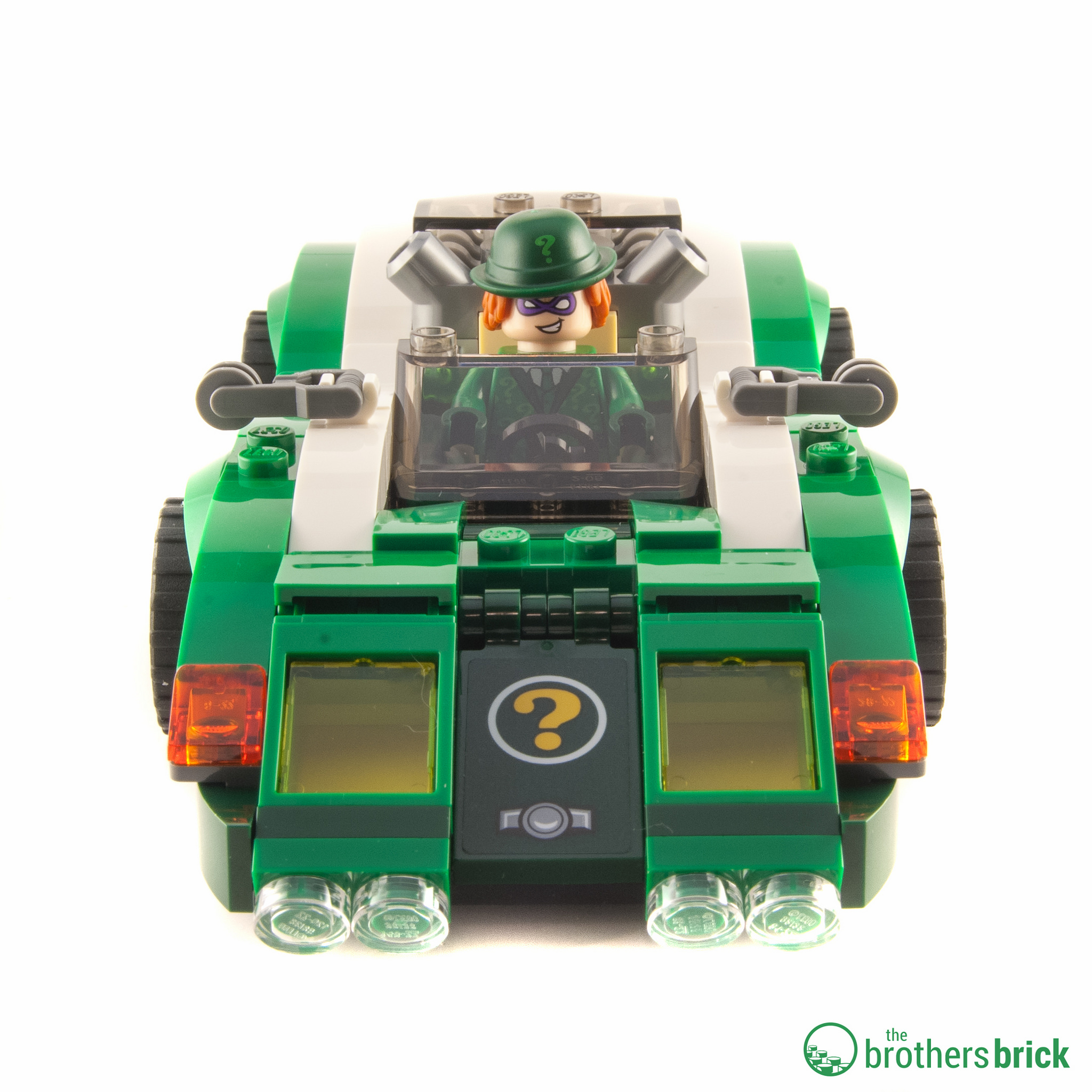 I can hardly think of a better element for the side mirrors than the zip line handles, though I do wish they’d been in a new color — perhaps flat silver instead of dark grey. The engine is carefully built to fit under the windscreen element used on a lot of Speed Champions sets. The engine really fills the volume, and looks fantastic. 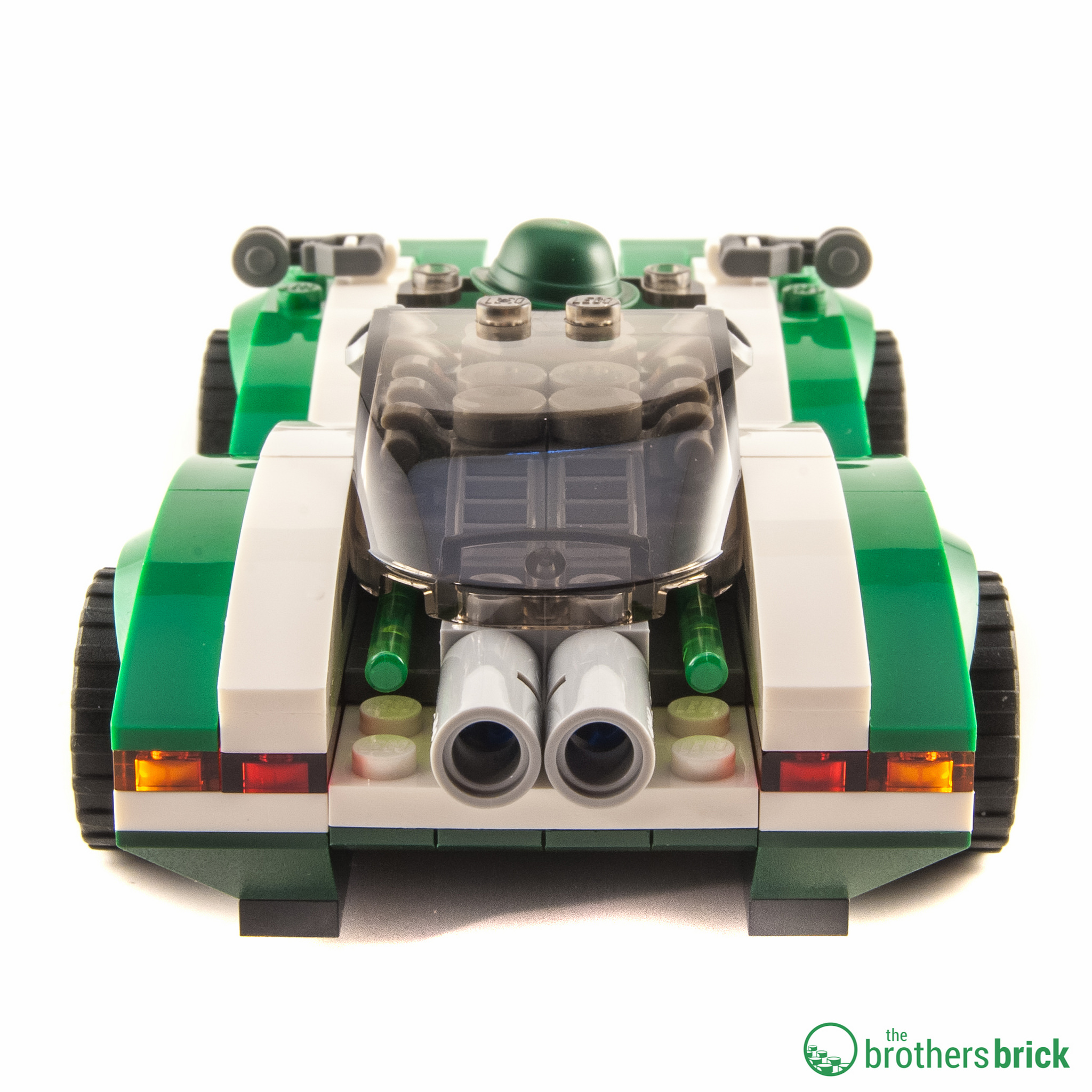 Oh, that big hole where engine goes? That’s because the engine is a separate subassembly that attaches to the car with clips, so that it can tilt back. Two spring-loaded darts are positioned on either side of the Ridder’s seat, and tilting the engine compartment allows to clear his head when fired. The engine doesn’t scrape the ground when tilted back, though there’s not much clearance. The darts are launched by pushing their exposed ends beside the exhaust pipes. 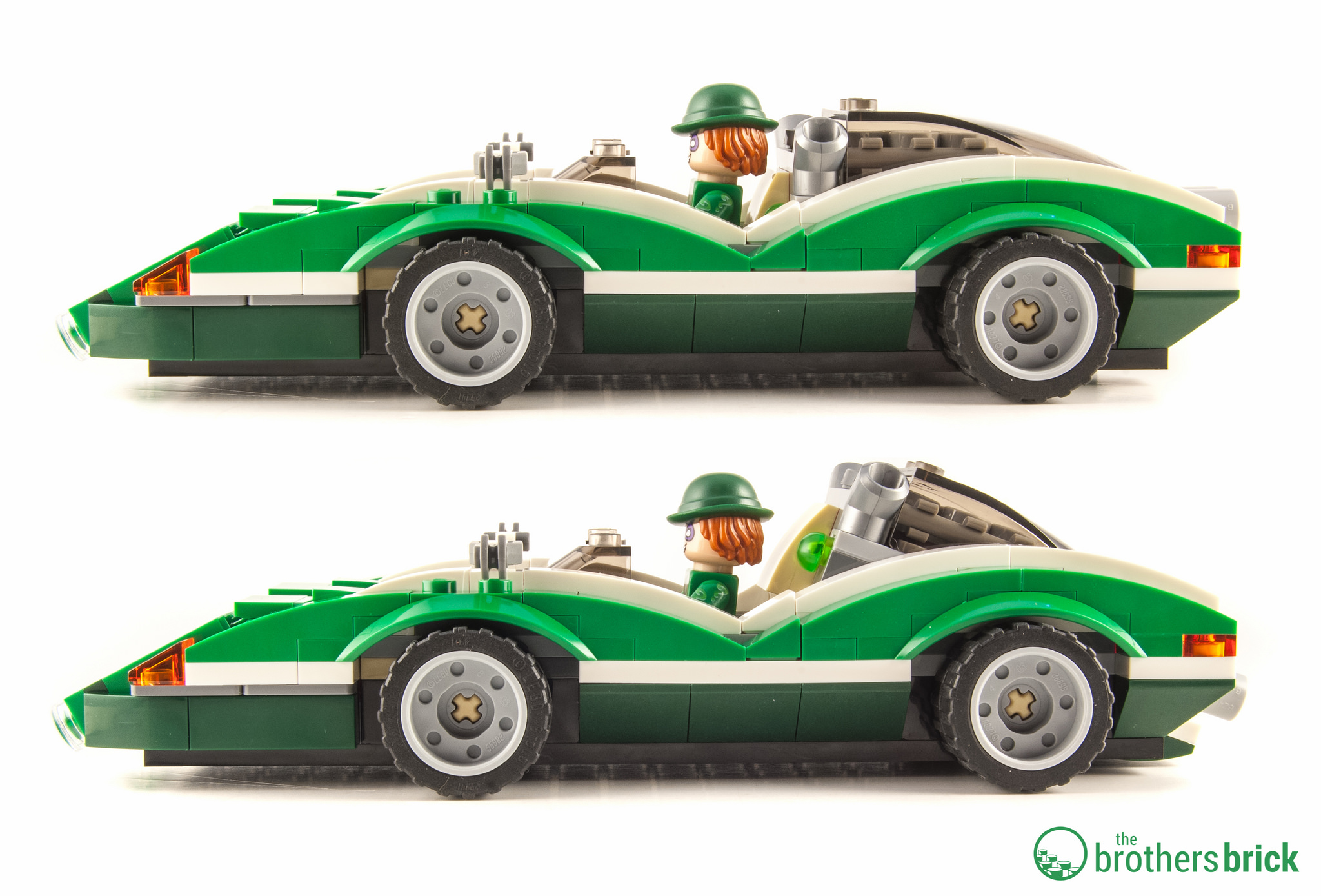 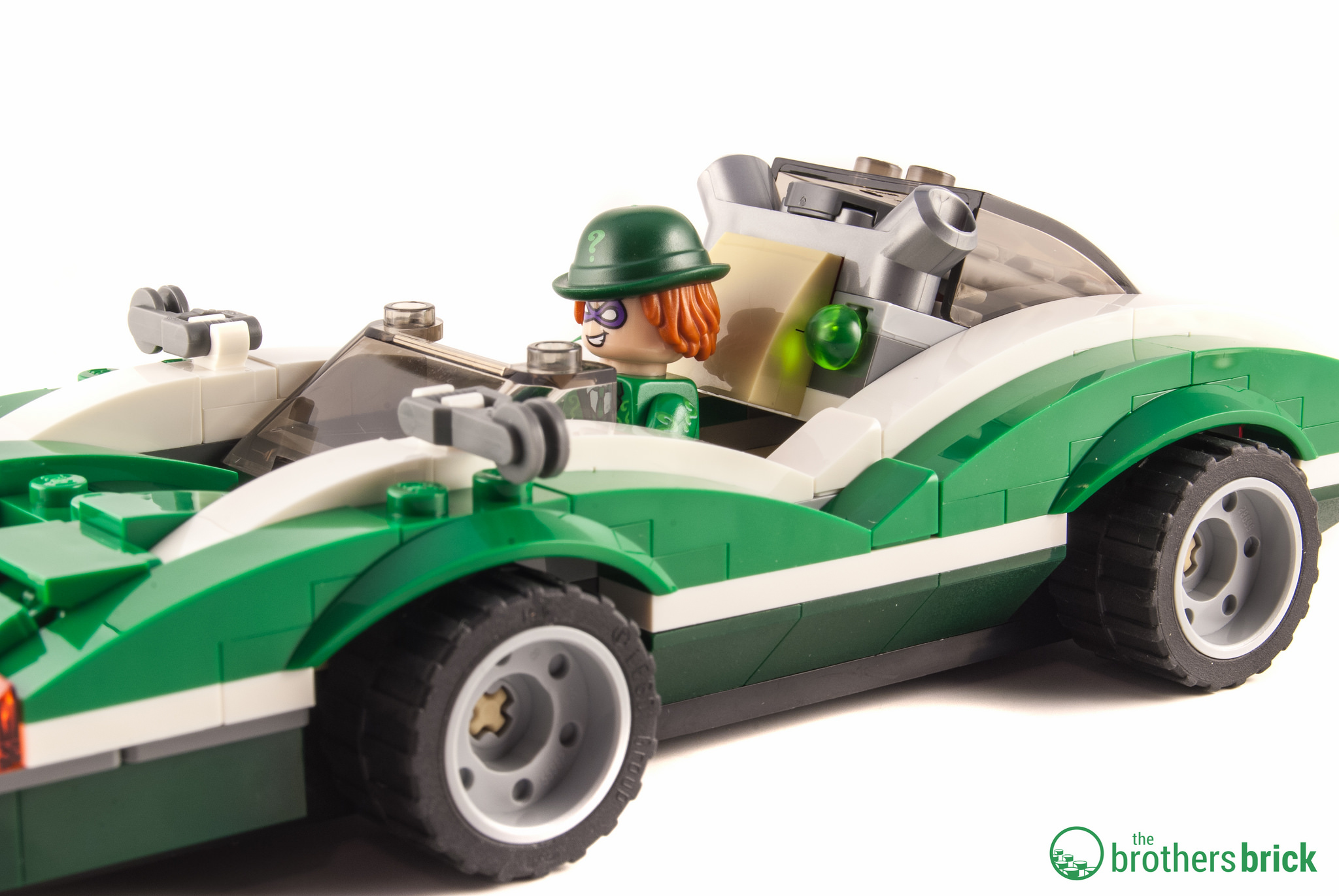 Five minifigures are included in this set, no doubt contributing to the slightly higher than average price. All of them except Batman are currently exclusive to this set.

Batman is the same minifigure that’s included in most of The LEGO Batman Movie sets, and like those, you’ll get an extra yellow utility belt. He’s got a double-sided head with two expressions, and carries a batarang. 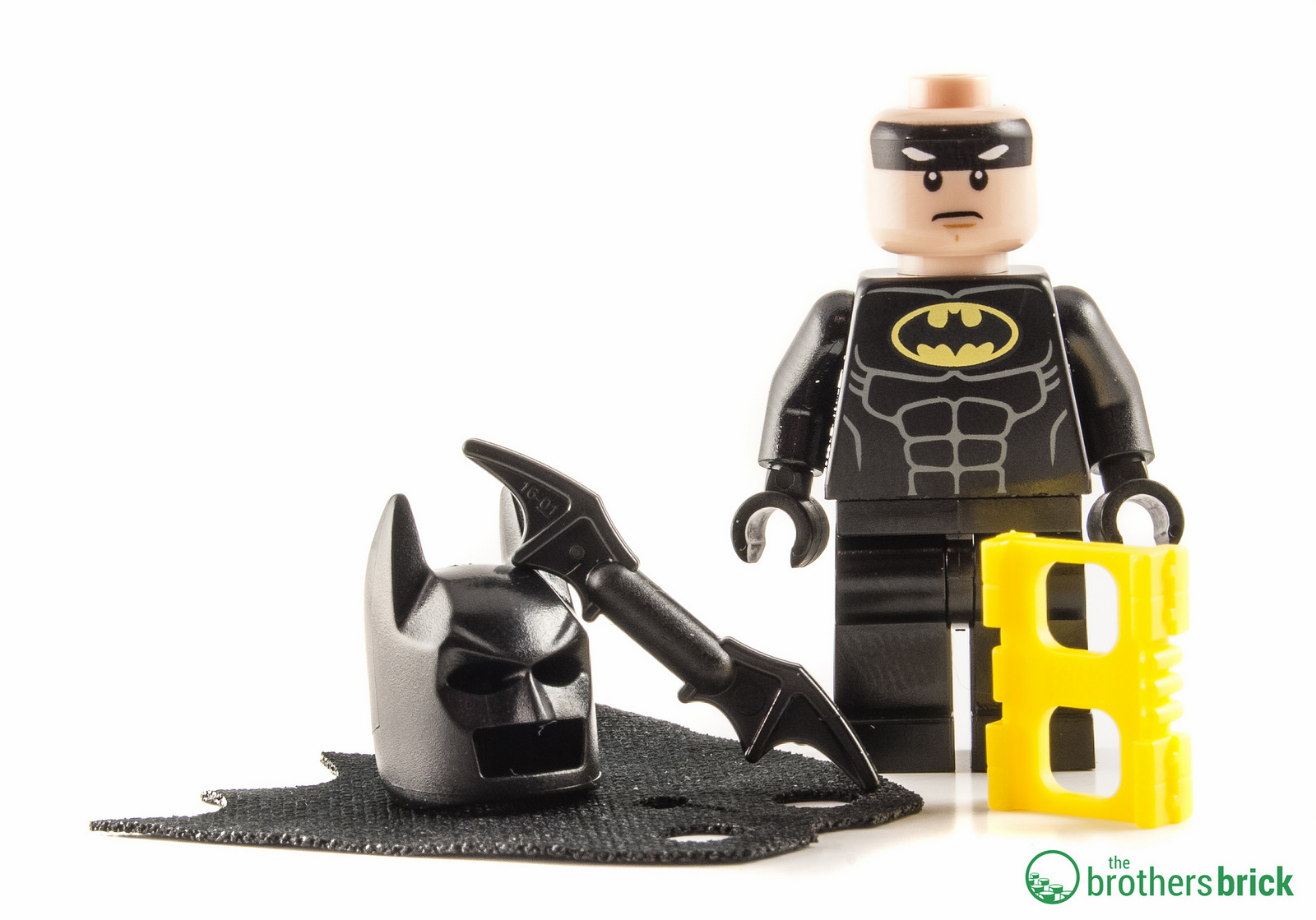 The Riddler wears a fancy new bowler hat piece that has orange hair attached. It appears to be a complex dual-injection mold, so both the dark green hat and dark orange hair are natural plastic, not paint. There’s also a small green question mark on the front of the bowler. The Riddler’s green suit is covered with tiny question question marks on the front, back, and even the arms and hip piece. 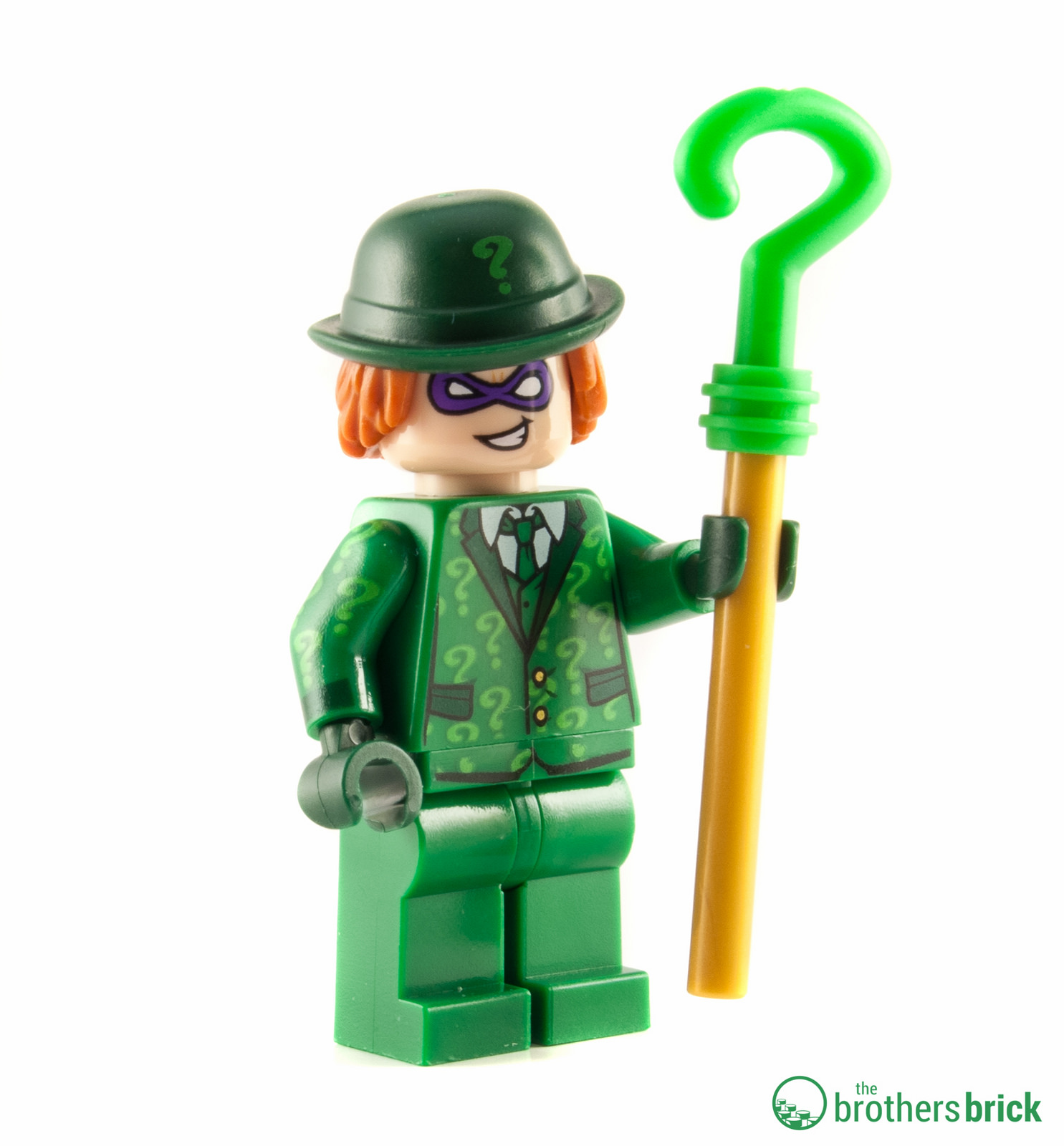 The Riddler has a double-sided head, and most interesting of all, carries a special staff. The staff is a pearl gold bar 4L, but the bright green question mark is a new element. It can be gripped by a minifigure hand anywhere along its curve. I have two gripes with the element, though. One, it’s the only bright green element in the set. It should be green or dark green like the rest of the Ridder’s color scheme. And secondly, although the bottom looks like it’s a stud, it’s not. It has a 3.18mm hole for the gold rod, but the bottom is otherwise incompatible, which is a shame and makes this element much less useful for other applications. 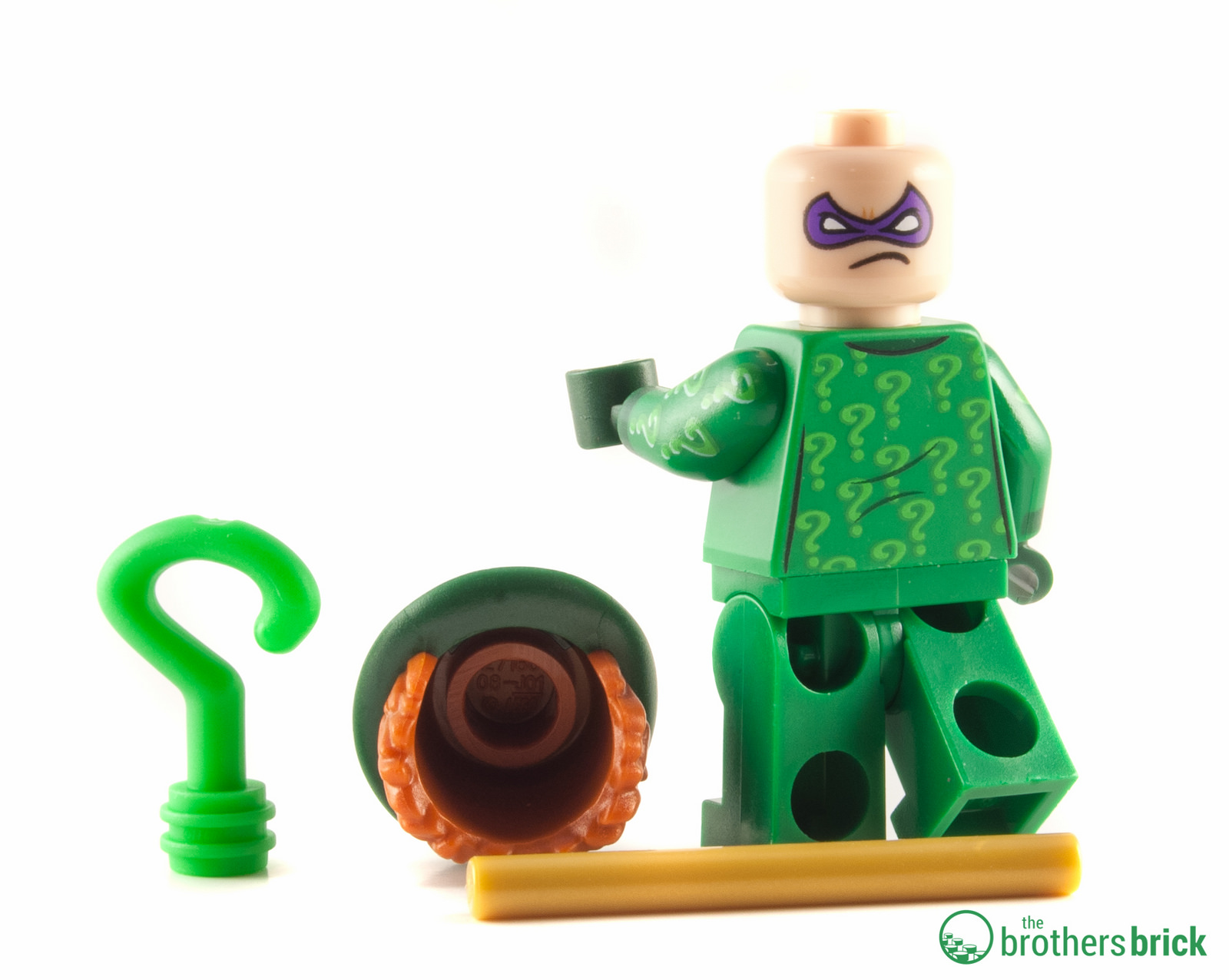 Next up is Calendar Man. No, we promise we didn’t make this guy up, and neither did The LEGO Batman Movie, as hard as that may be to believe. He’s known for committing crimes on important dates and anniversaries. (No, seriously!) Calendar Man has a red swim cap with a white calendar grid print, and a red head with the black mask and face printed on. The head is single sided. Calendar Man’s legs are dual-injection molded with white on top and red on the bottom, and printed to form the lower red leotard. 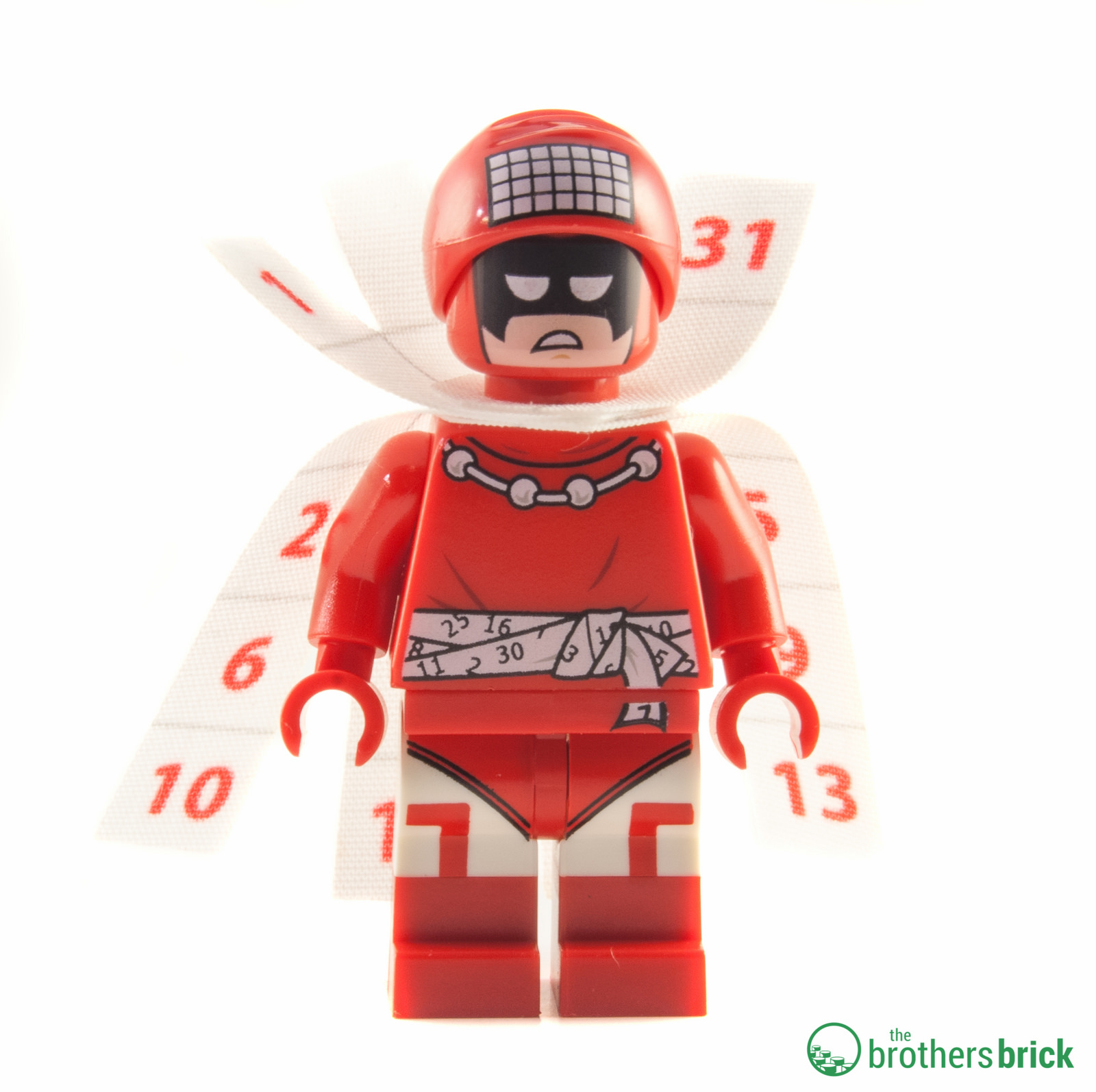 Calendar Man’s cape is his most unique aspect, composed of two individual white capes cut into ribbons with red dates printed on them. The smaller one is turned upside down to form the upper cowl. 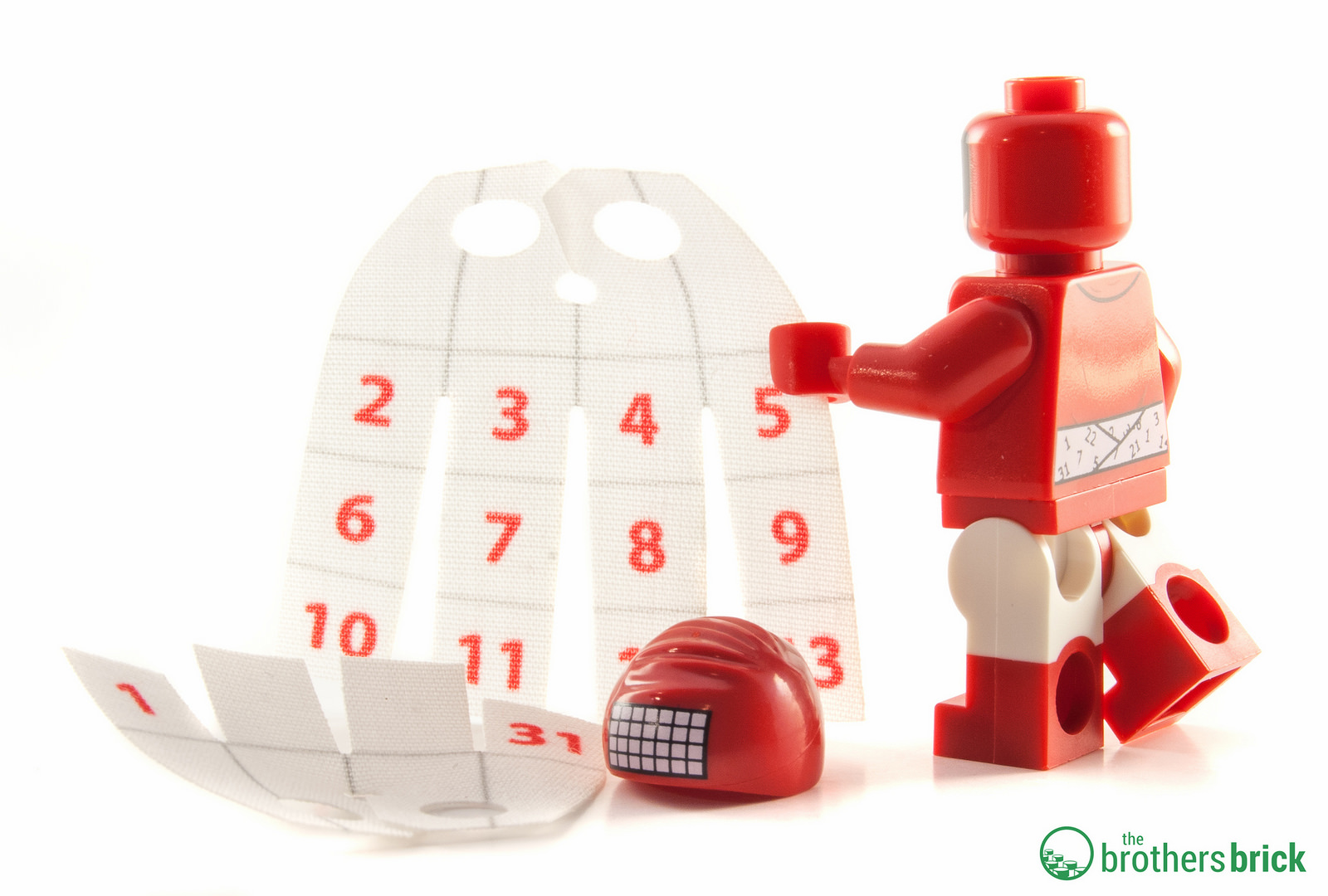 Like her avian namesake, Magpie is obsessed with collecting shiny baubles. Her most striking feature is the black shoulder armor, originally from the Chima line, and has up til now only been available in pearl gold. Her torso is fully printed on both front and back, and she’s got silver eyeshadow on both expressions of the double-sided head. 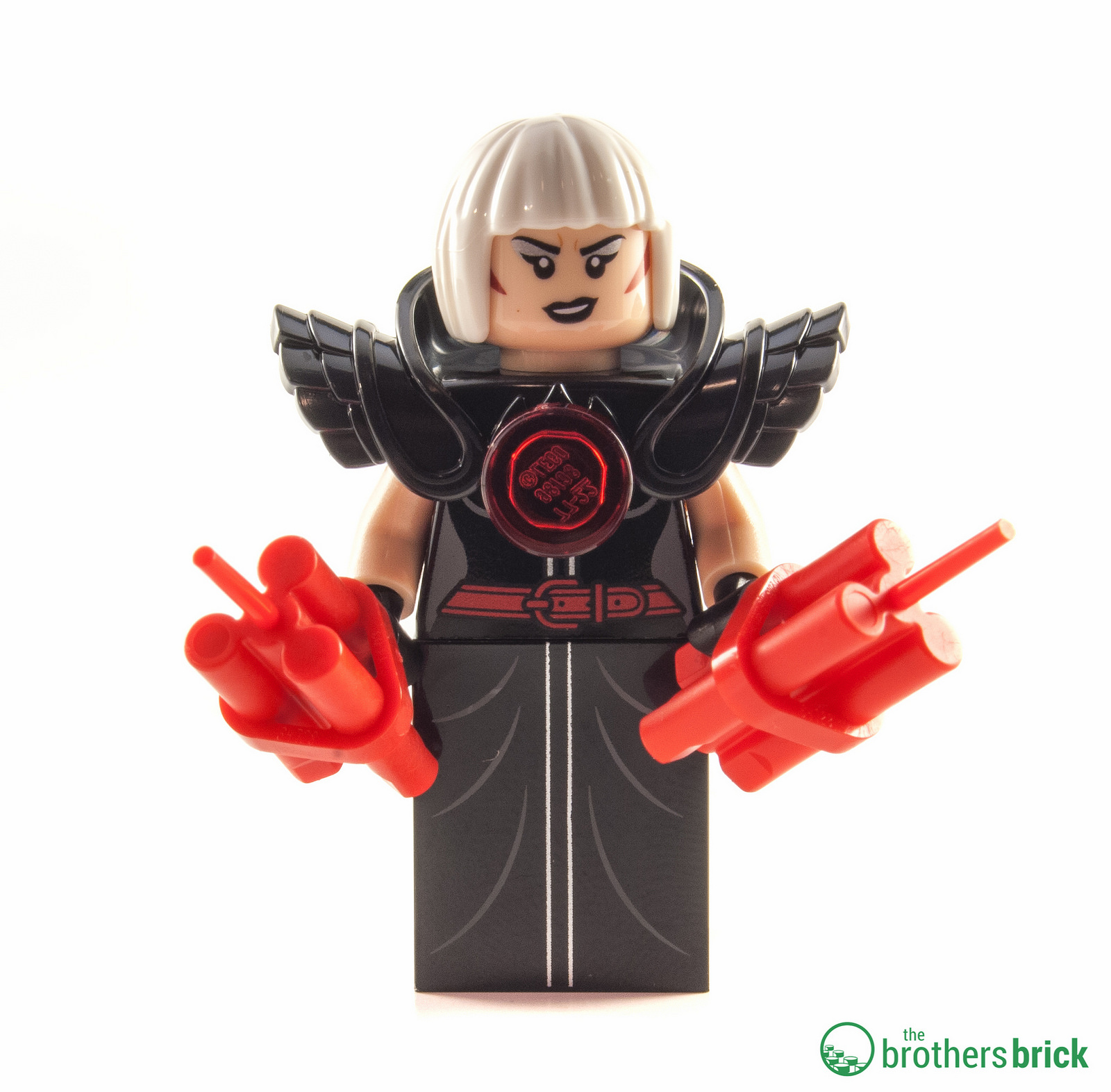 As with many other minifigures wearing long dresses, Magpie’s legs are a 2x2x2 slope brick with a print on the vertical side. Magpie carries two bundles of dynamite, and has short cropped white hair perfect for your popstar lead. 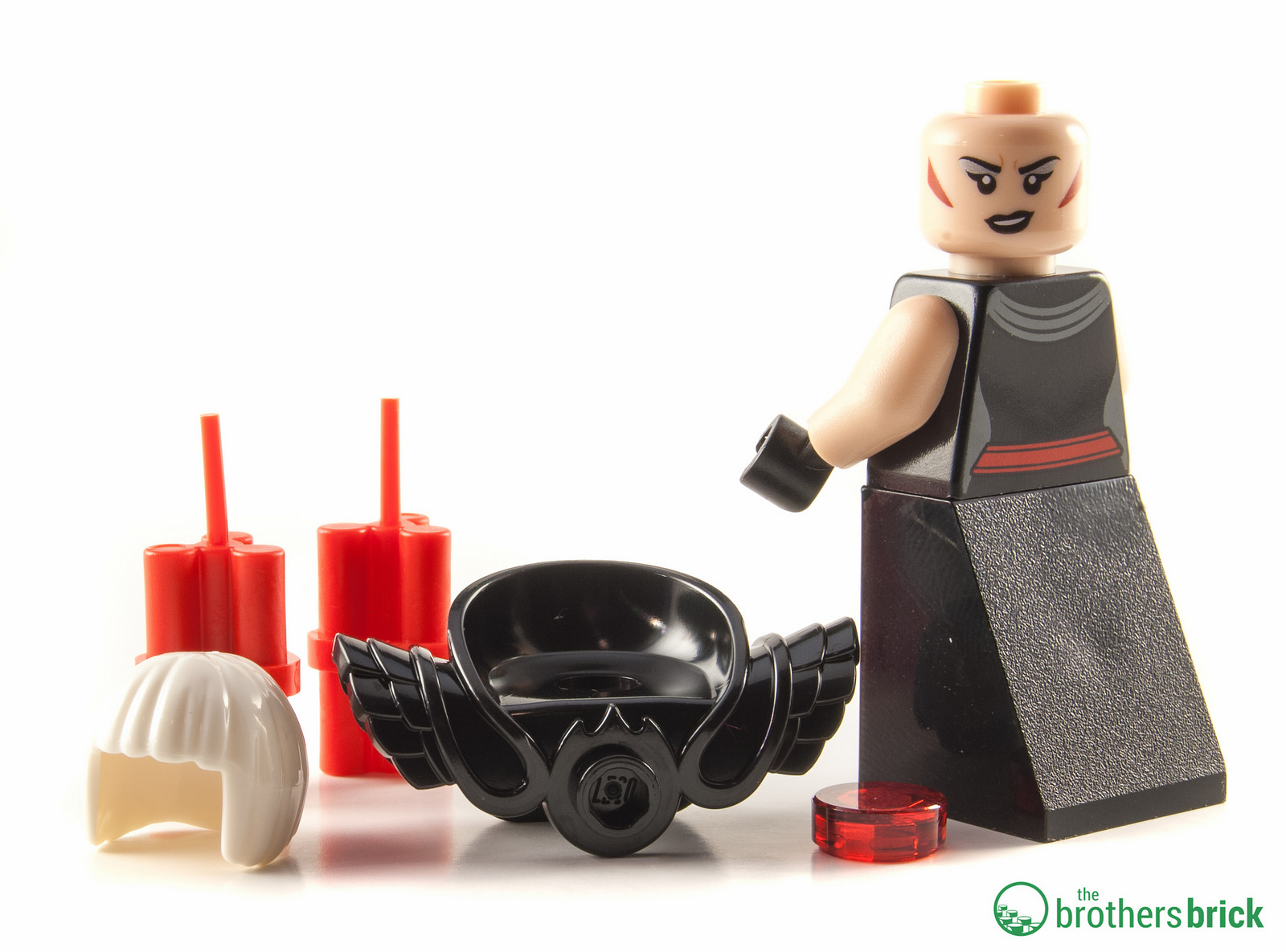 Can you guess Kite Man’s signature ability? If you guessed that he fights using kites, you’re a winner! Hopefully the wind cooperates. At any rate, Kite Man gets a yellow helmet without a chin strap that bears his logo, and a lime green torso with the same emblem. The head is double-sided with two generic but emotive expressions that will definitely be useful. 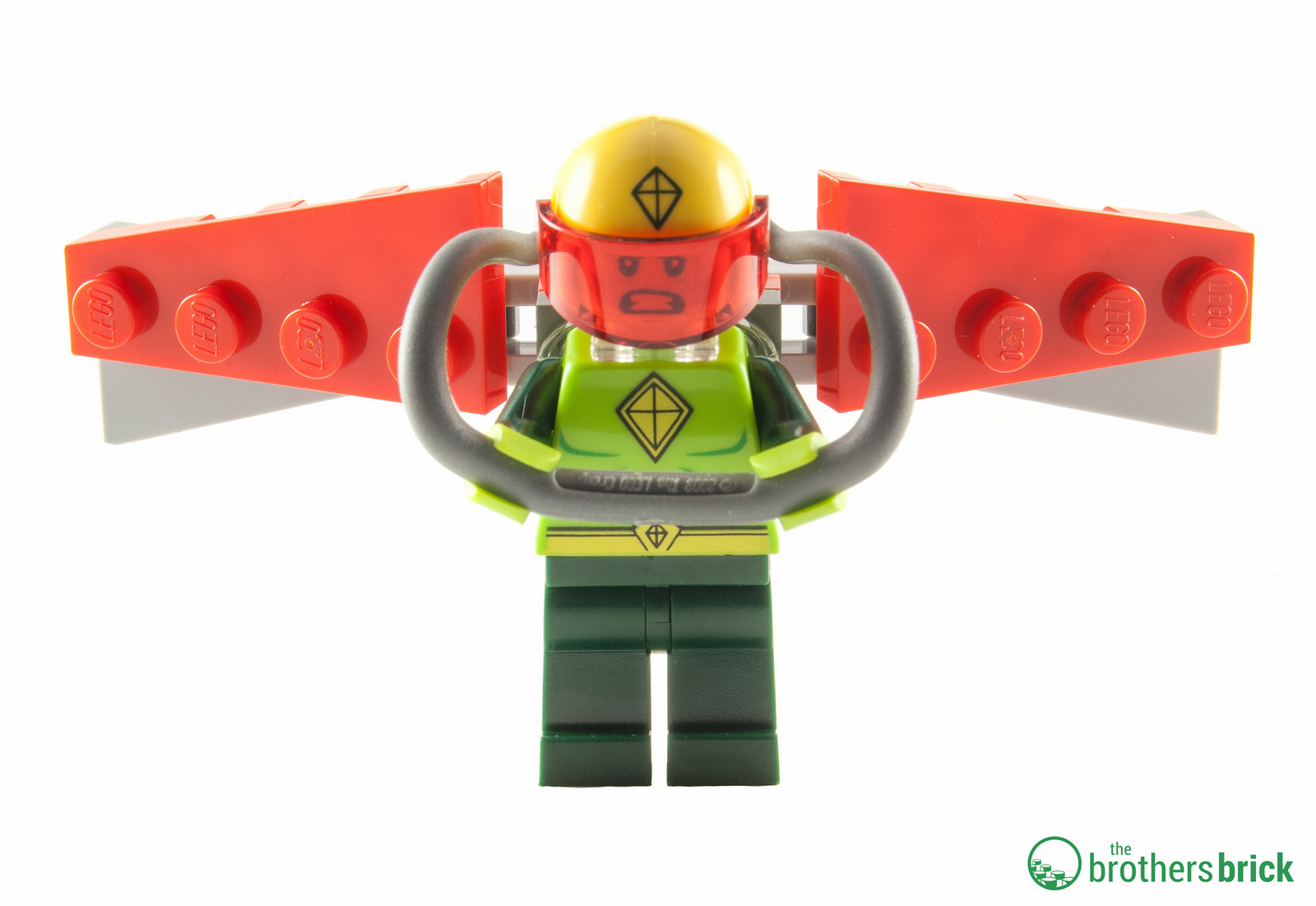 Kite Man’s kite is held on with a clear neck 2-stud bracket, and is built with some simple wedge plates and clips. The harness is a dark grey tauntaun reins element, which is a soft rubber element. This is the first set to use the piece for something other than its original purpose. 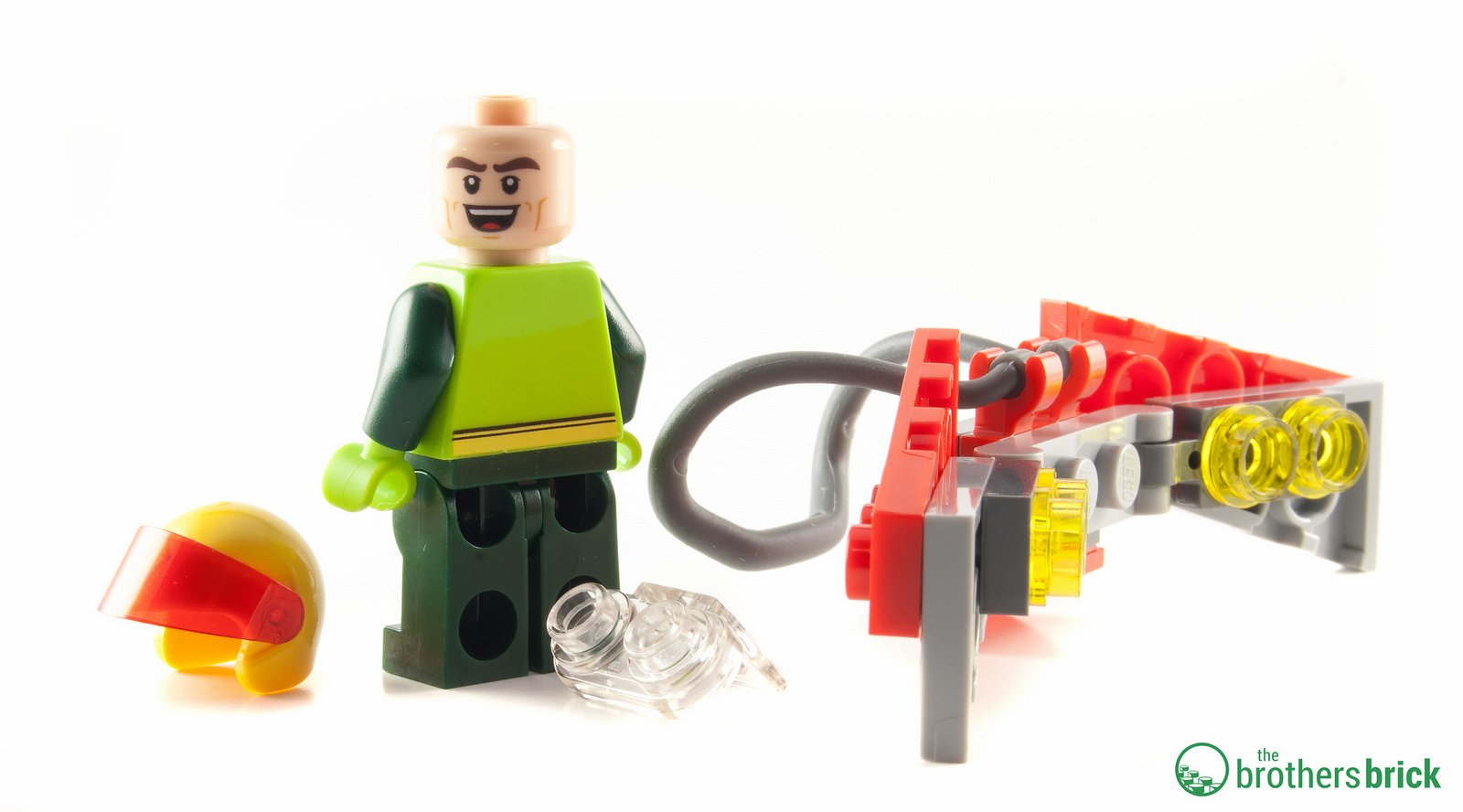 While the price of 70903 The Riddler Riddle Racer may be slightly above average, so is the design. You don’t have to be a Batman fan to appreciate how great of a LEGO vehicle this awesome race car is, and if you are a Batman fan, getting not one but four exclusive villains in a $30 set is a bargain. Add to that a number of new colors and revivals of rare elements, and we’d say that this is a set you won’t want to miss.