We’re continuing our adventure in the South Seas, after reviewing 41149 Moana’s Island Adventure, with the second set celebrating Disney’s Moana, 41150 Moana’s Ocean Voyage. This is the larger of the two, and retails for $39.99 USD, with 307 pieces. 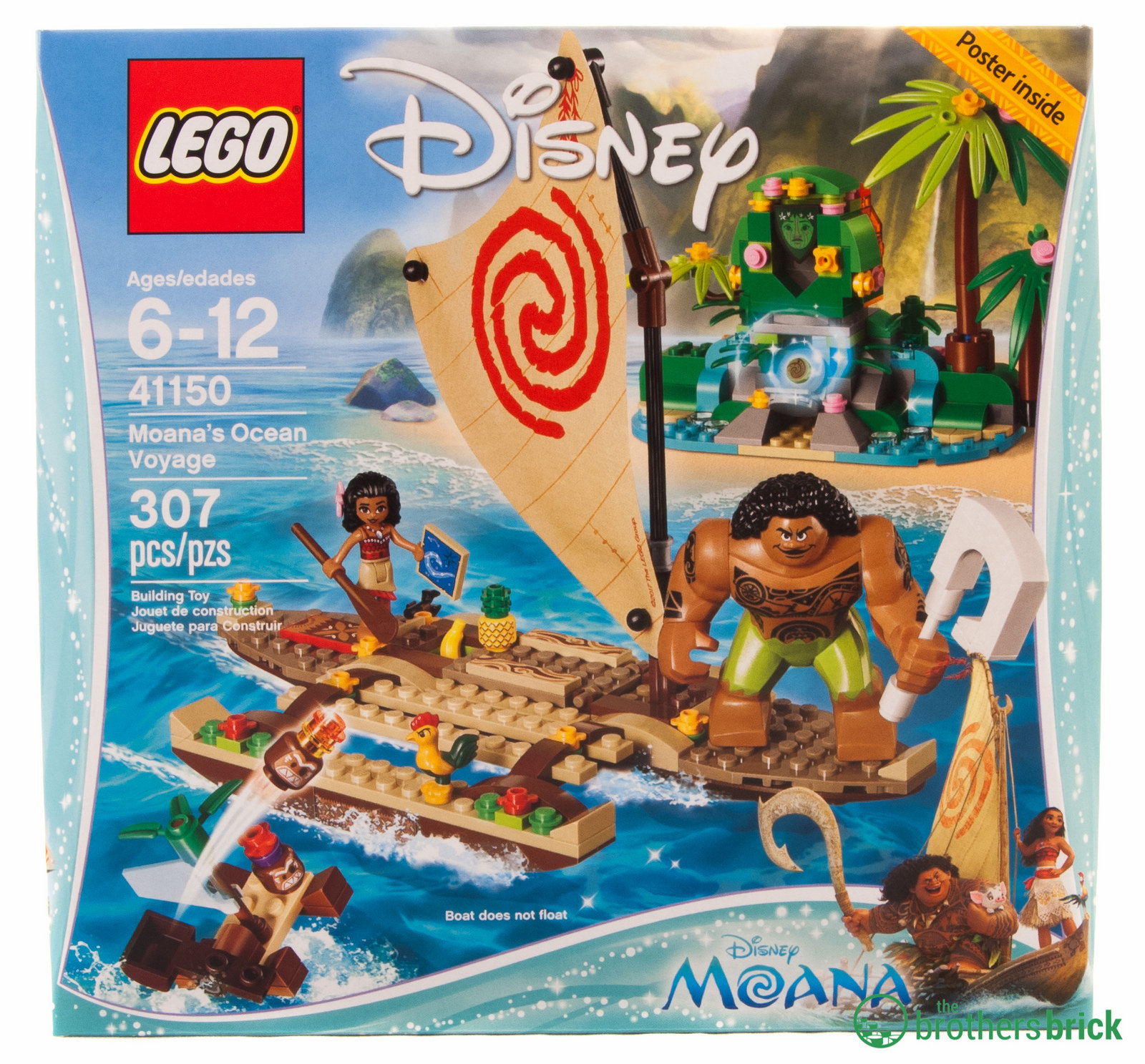 We’re going to talk about the film a bit in this review, so be warned of mild spoilers ahead. 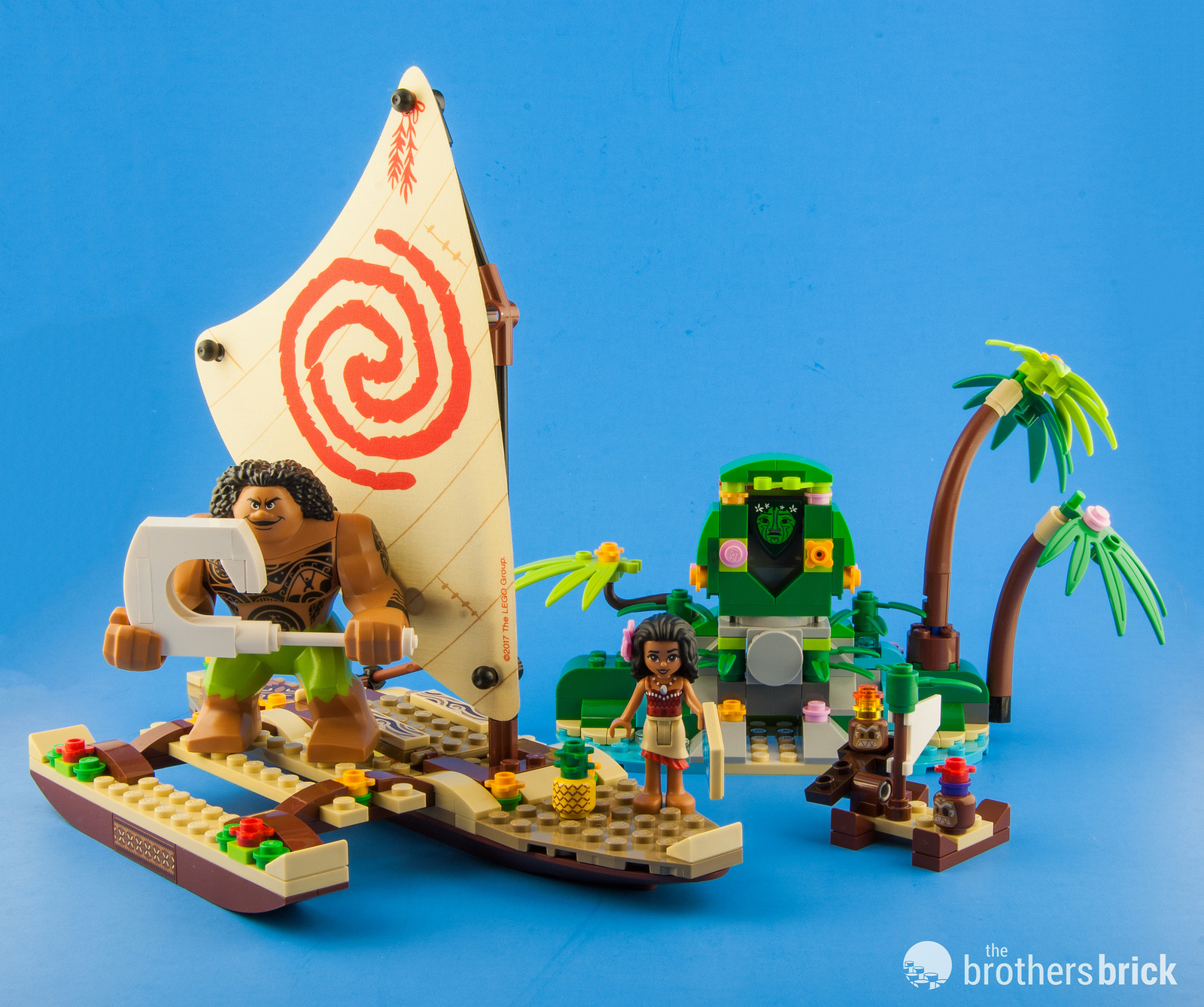 41150 Moana’s Ocean Voyage is a playset like Moana’s Island Adventure. This one contains Moana’s sailing outrigger canoe, the island of Te Fiti, a little raft with two Kakamora, Moana, her chicken Heihei, and Maui. There are three bags of parts, a small sticker sheet, and the sail along with a single instruction book that’s bound, not stapled. 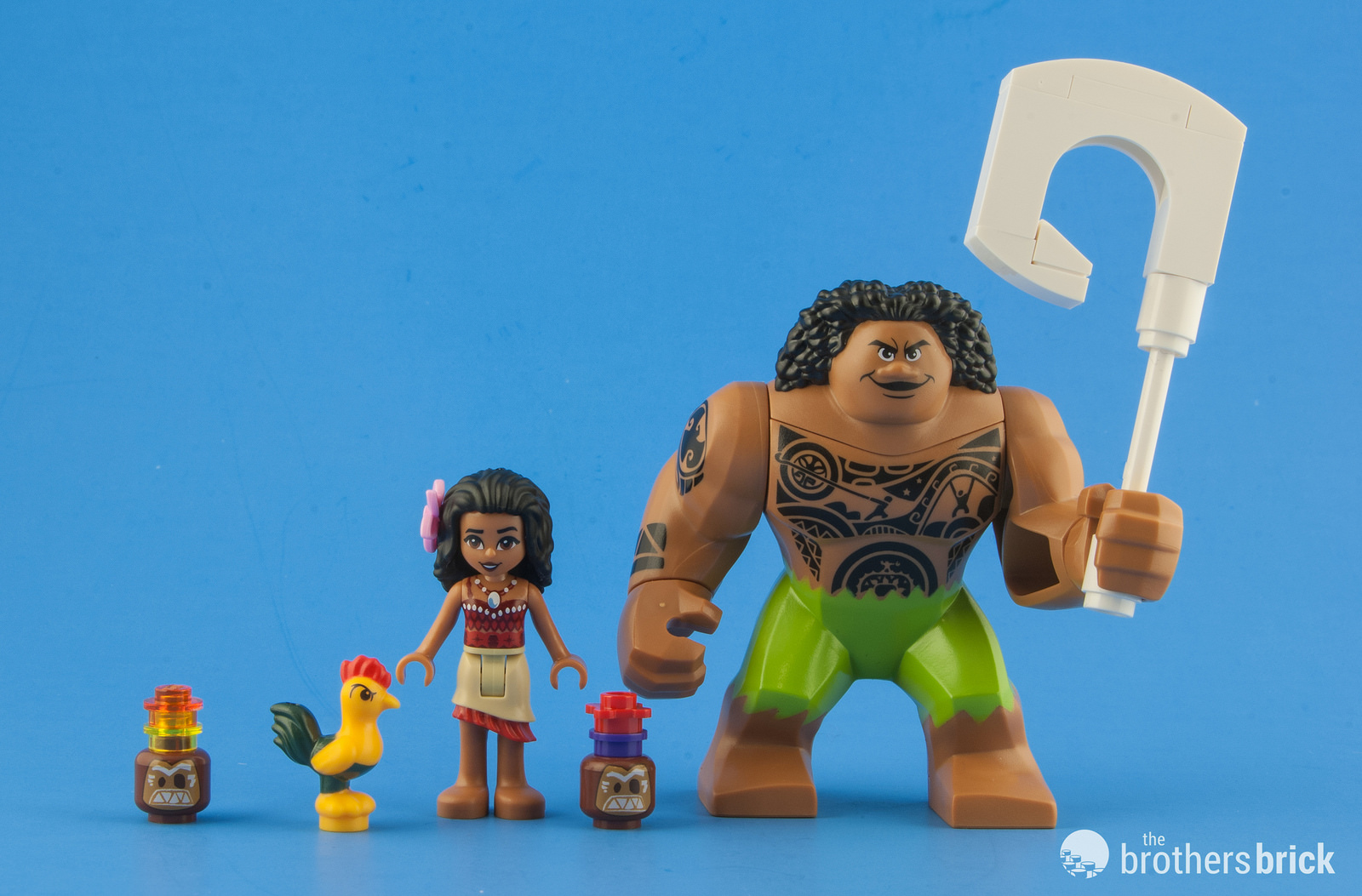 Moana has a different torso print than the other set, whose printing is similar to what she wears through the majority of the film. This version is a bit closer to what Moana wears at the end of the film. She holds a printed 2×2 tile with a fish hook constellation. Heihei the rooster is a new mold and looks fantastic as a LEGO fowl, although he doesn’t really look like the idiot rooster of the film. The one included actually manages to appear self aware, while his on screen counter part should never be left unattended. I’m not even positive how Heihei manages to survive, as he seems incapable of feeding himself. 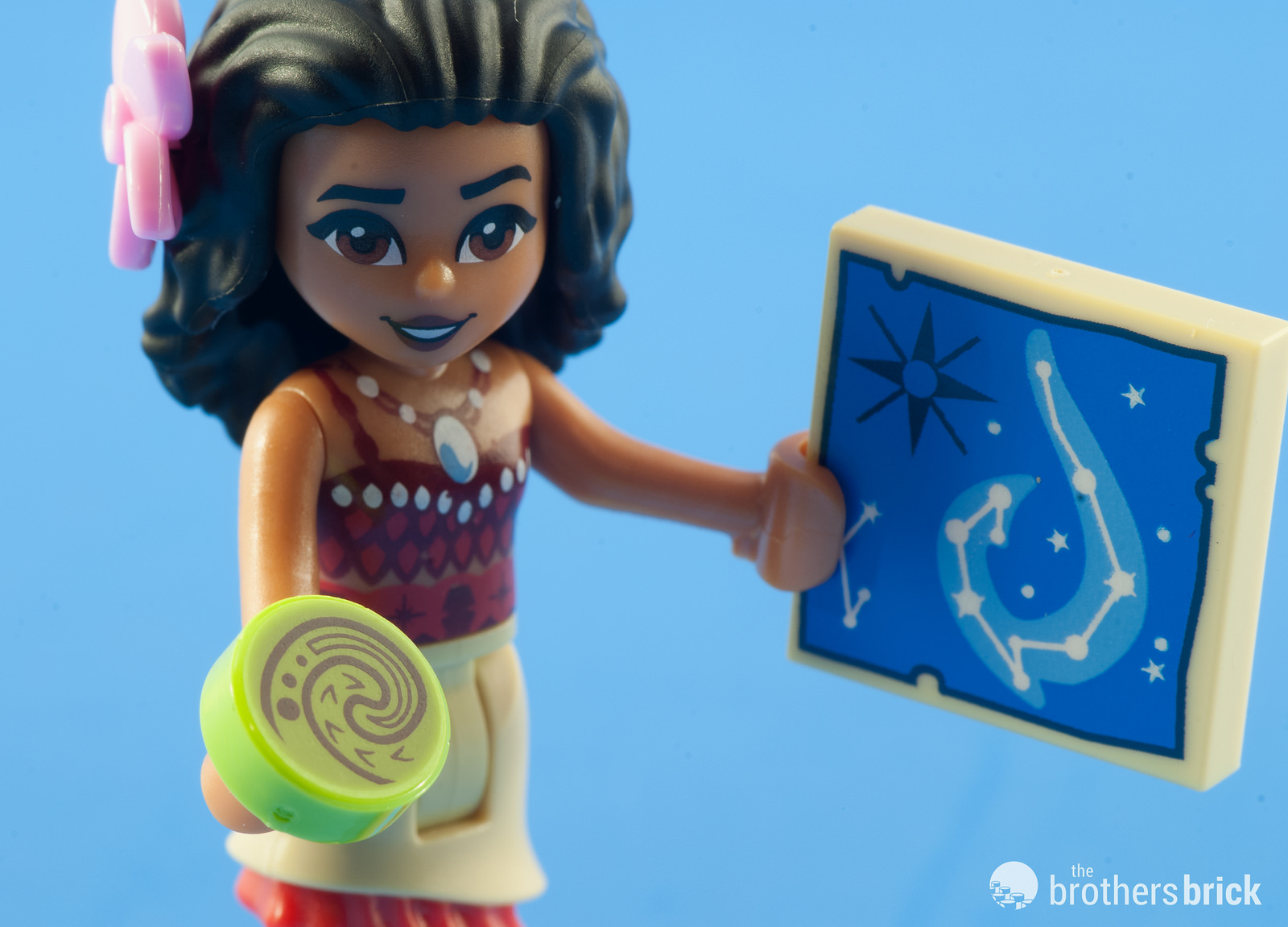 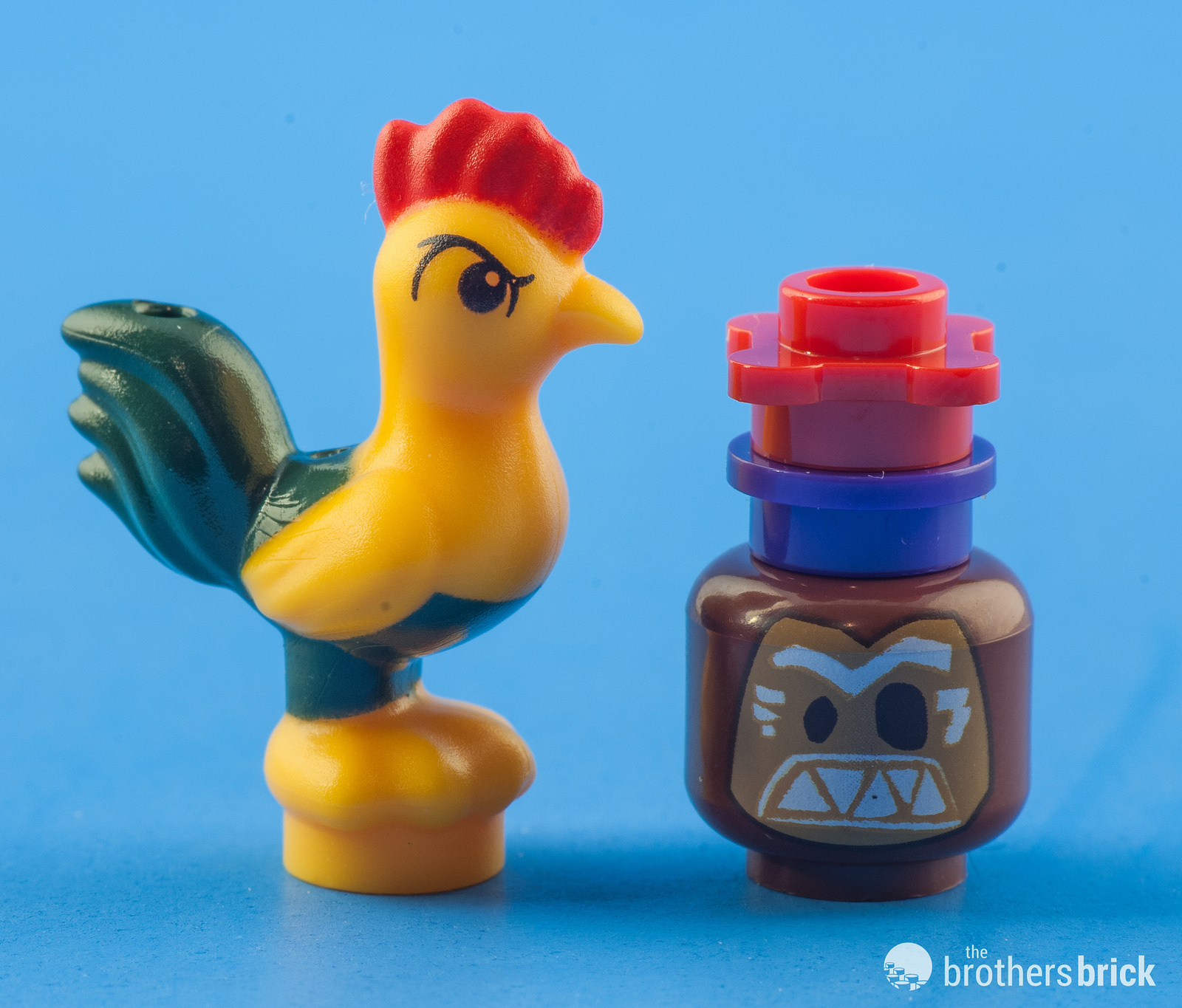 Maui is a big-fig, much like the Hulk. His chest and arms are printed with simplified versions of his tattoos; unfortunately he lacks any printing on the back at all. His back tattoos play a important role in his origin story, so it’s sad to see them missing. Maui’s hook is also disappointing; it looks nothing like its on-screen counterpart. Even making the handle at the bottom tan to replicate the wrappings on the hook could have improved it. I’d even settle for additional stickers as the hook in the film is covered in carvings. 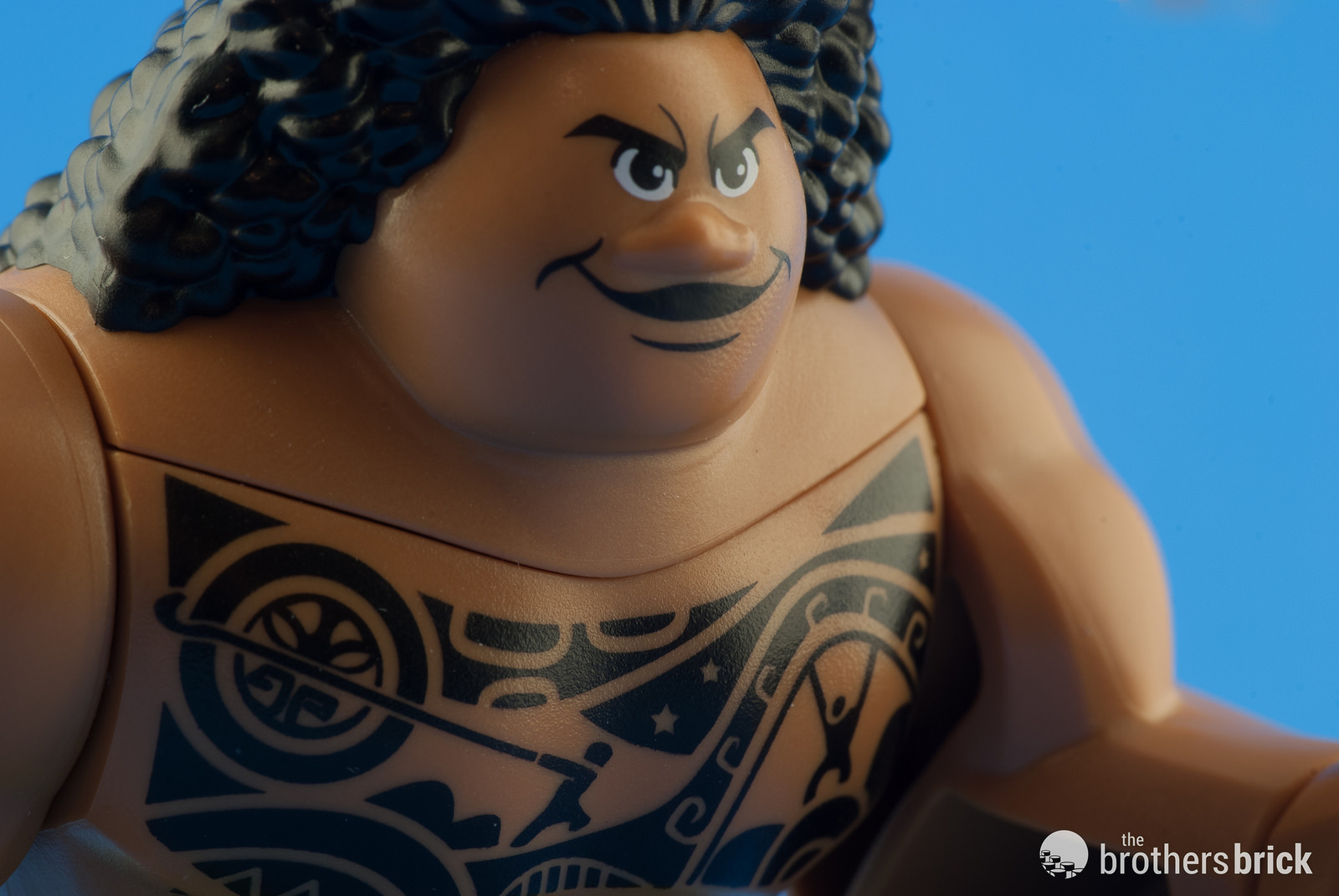 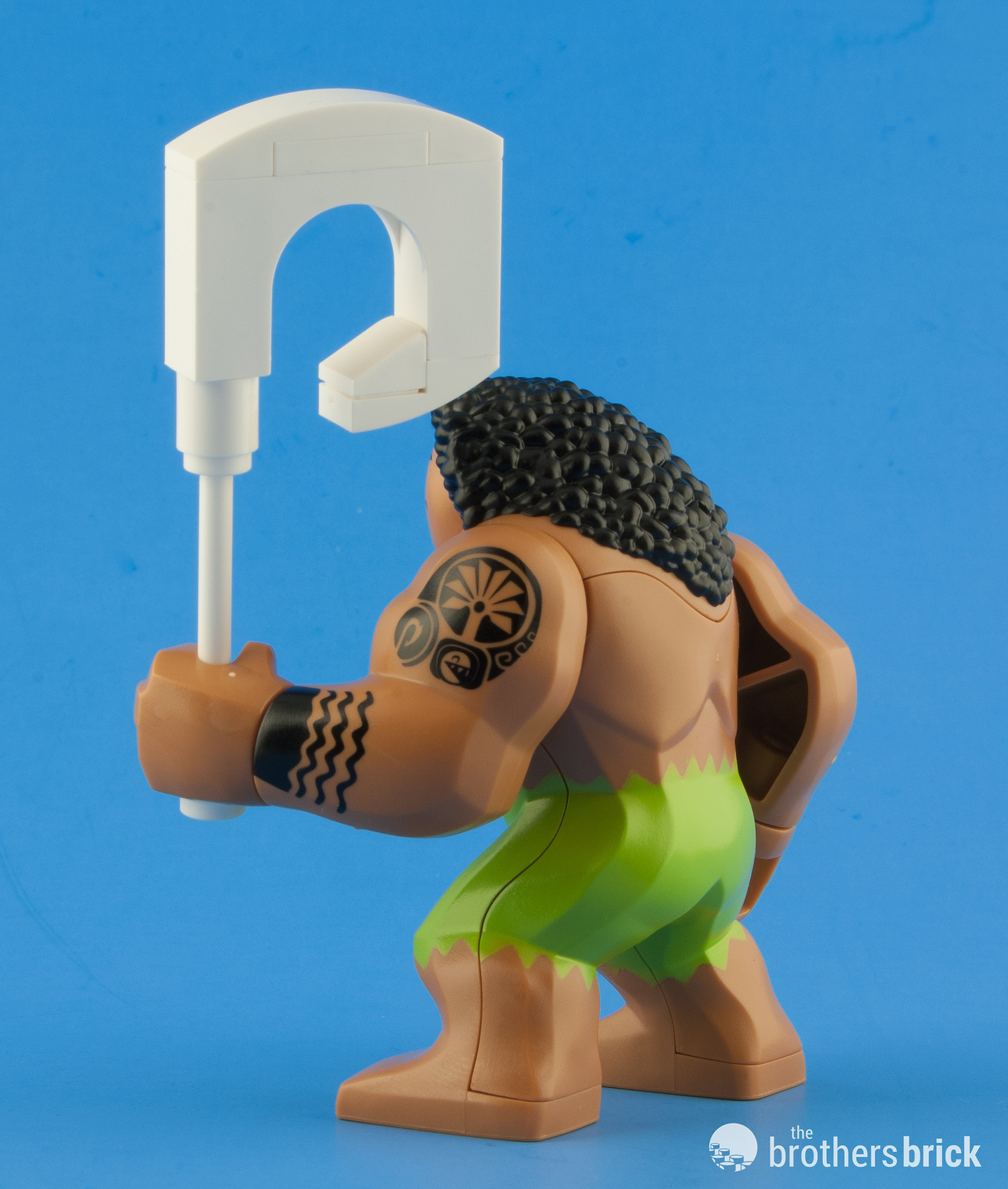 Moana’s sailing canoe is well designed, with a main vessel and outrigger. It does not float, as the box is keen to remind you. The canoe has a trapdoor with space below the deck for storing things, including Heihei. For most of the film, Moana’s canoe is bare, so this design is clearly meant to represent the very end of the film, when her canoe is covered in flowers. You’ll only catch a passing glimpse of it decked out with flowers on screen. 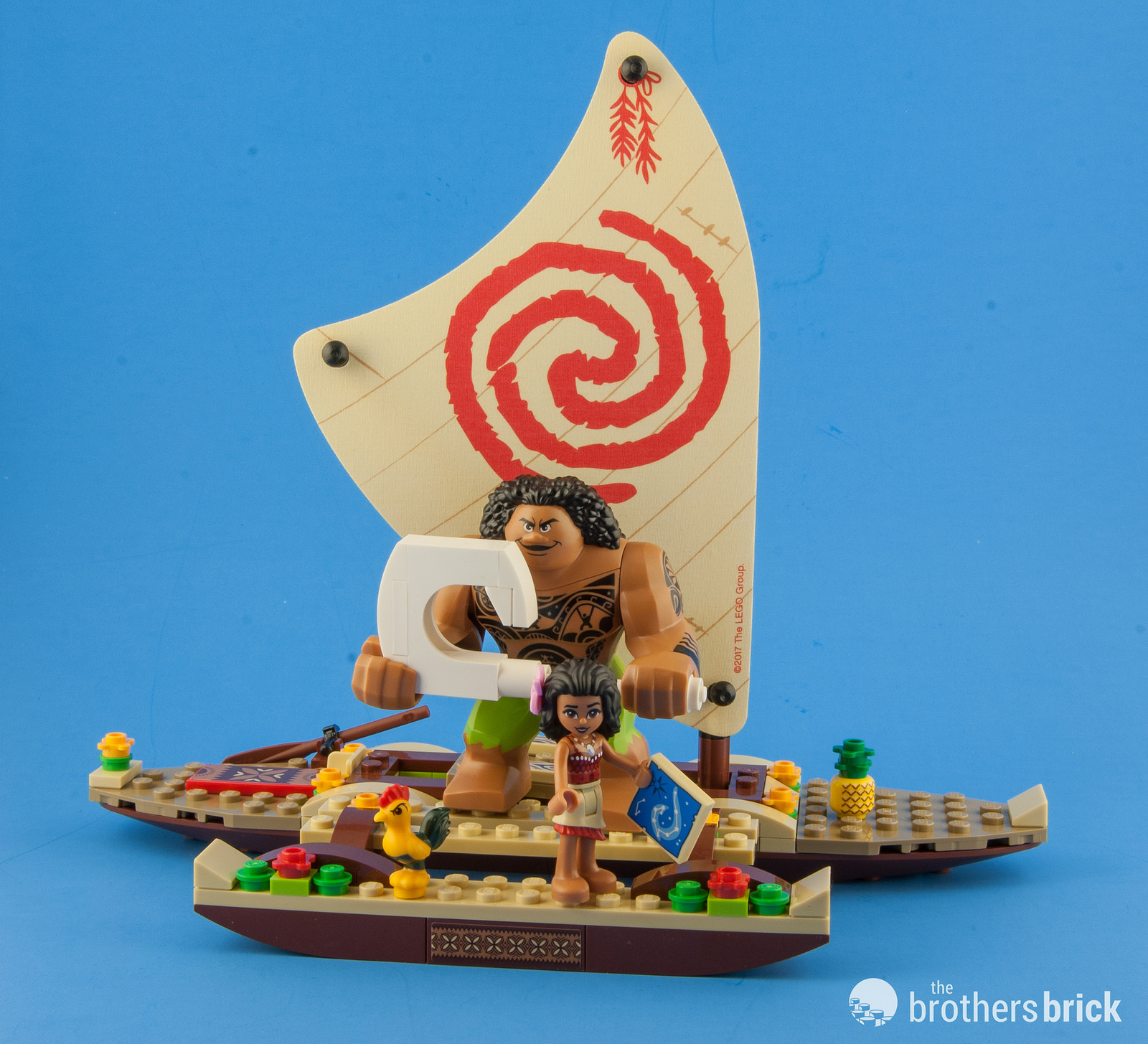 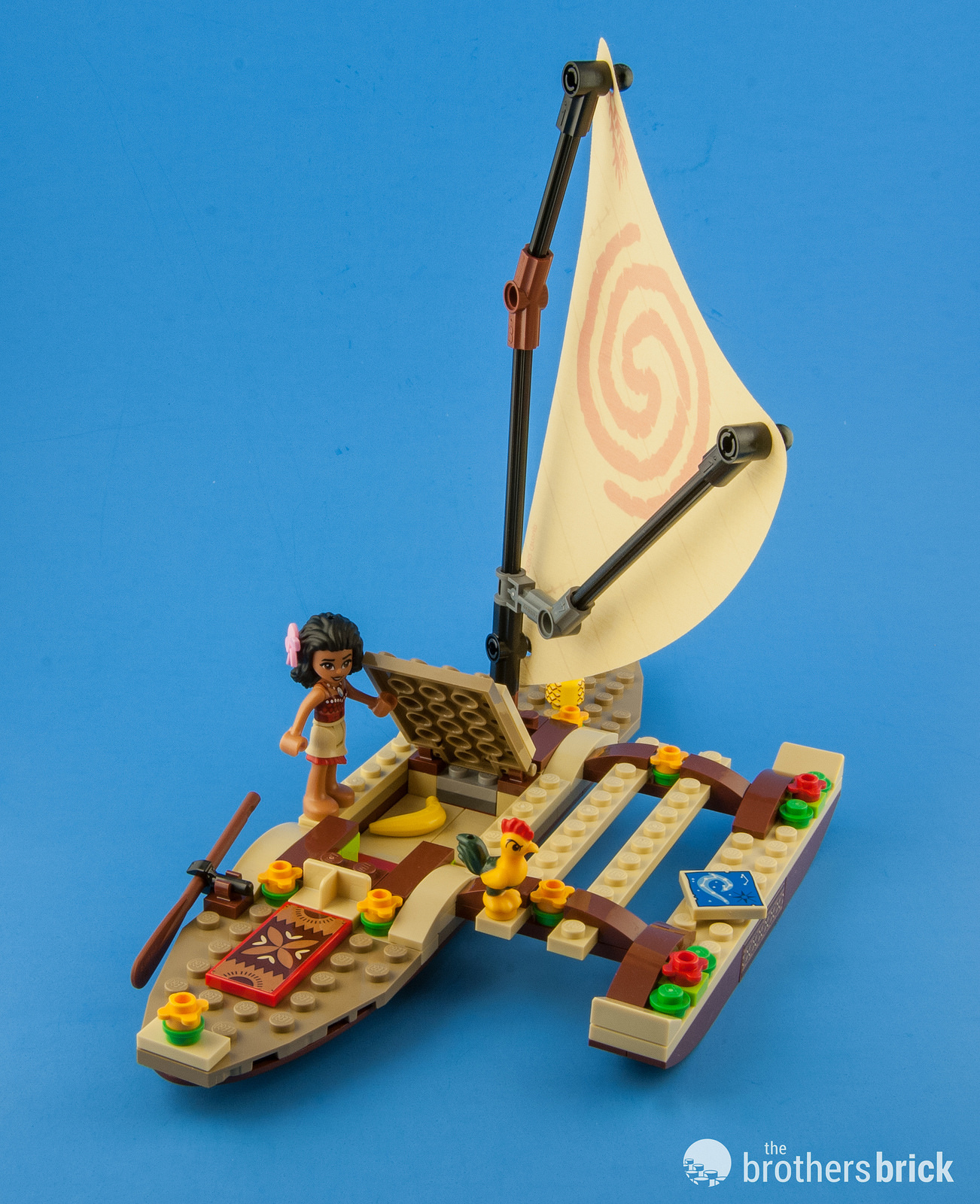 The set also features a tiny raft for the Kakamora; given the size of their vessels in the film, the raft is laughably small — more an homage than a representation. I’m glad they’re included though, even if they’re only given a 4×4 raft. Their coconut heads are printed with attack faces. The small catapult included on the raft happens to be one of LEGO’s better uses for that element and fits well with the tiny coconut creatures. 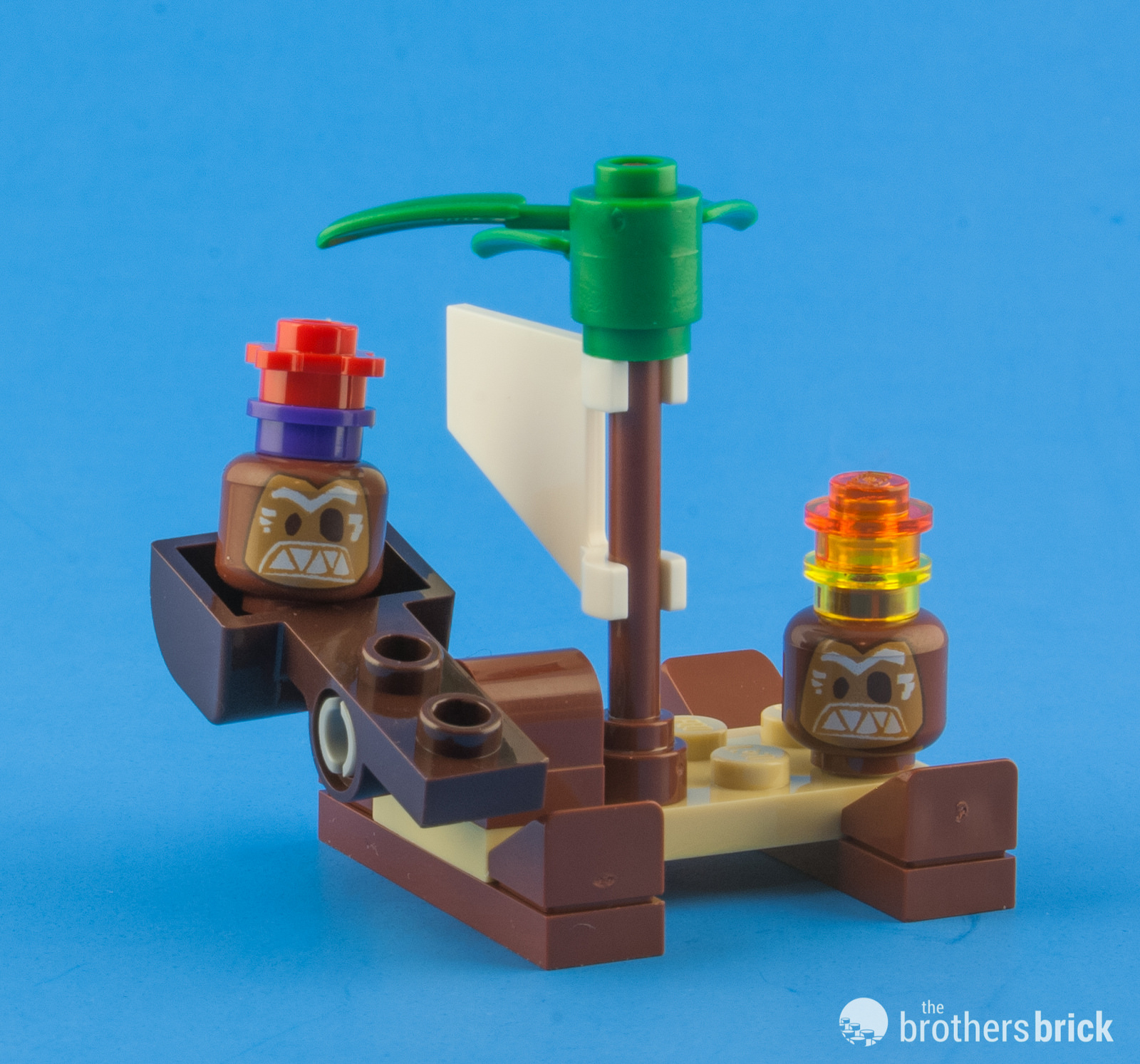 Lastly, Te Fini. The island of Te Fini is the end goal of the film and despite its small size in this set, the LEGO designers have done it justice. It’s a simple build that manages to emulate a lush island. You’ll get a pair of 3-stud long bars in bright green, which are currently only available in this and the Disney Castle. And you’ll get 6 new quarter-circle tiles in tan to make the rounded beach. 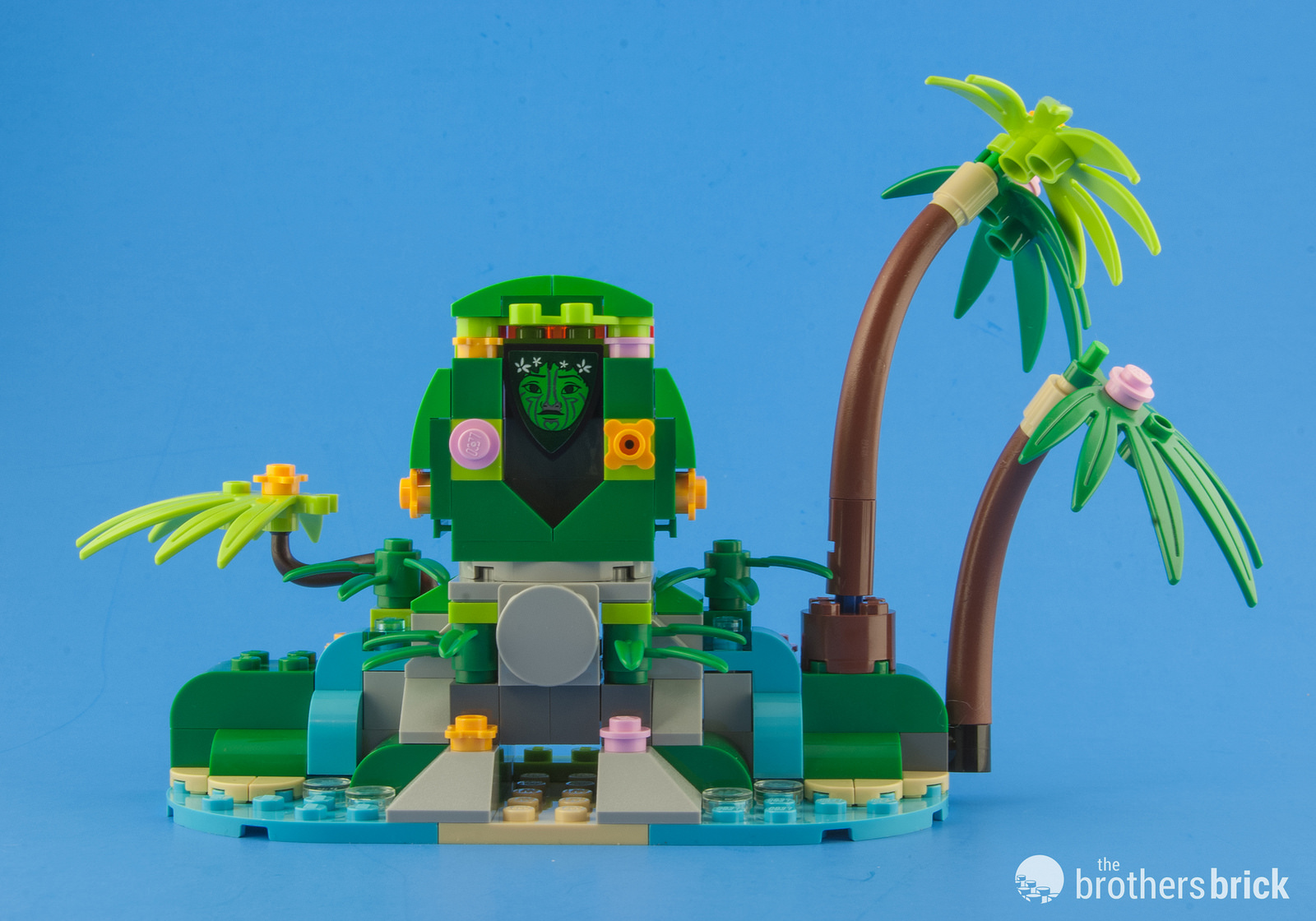 By flipping down the round 2×2 tile on the front exposes a slot to place the Heart of Te Fini and restore the island. 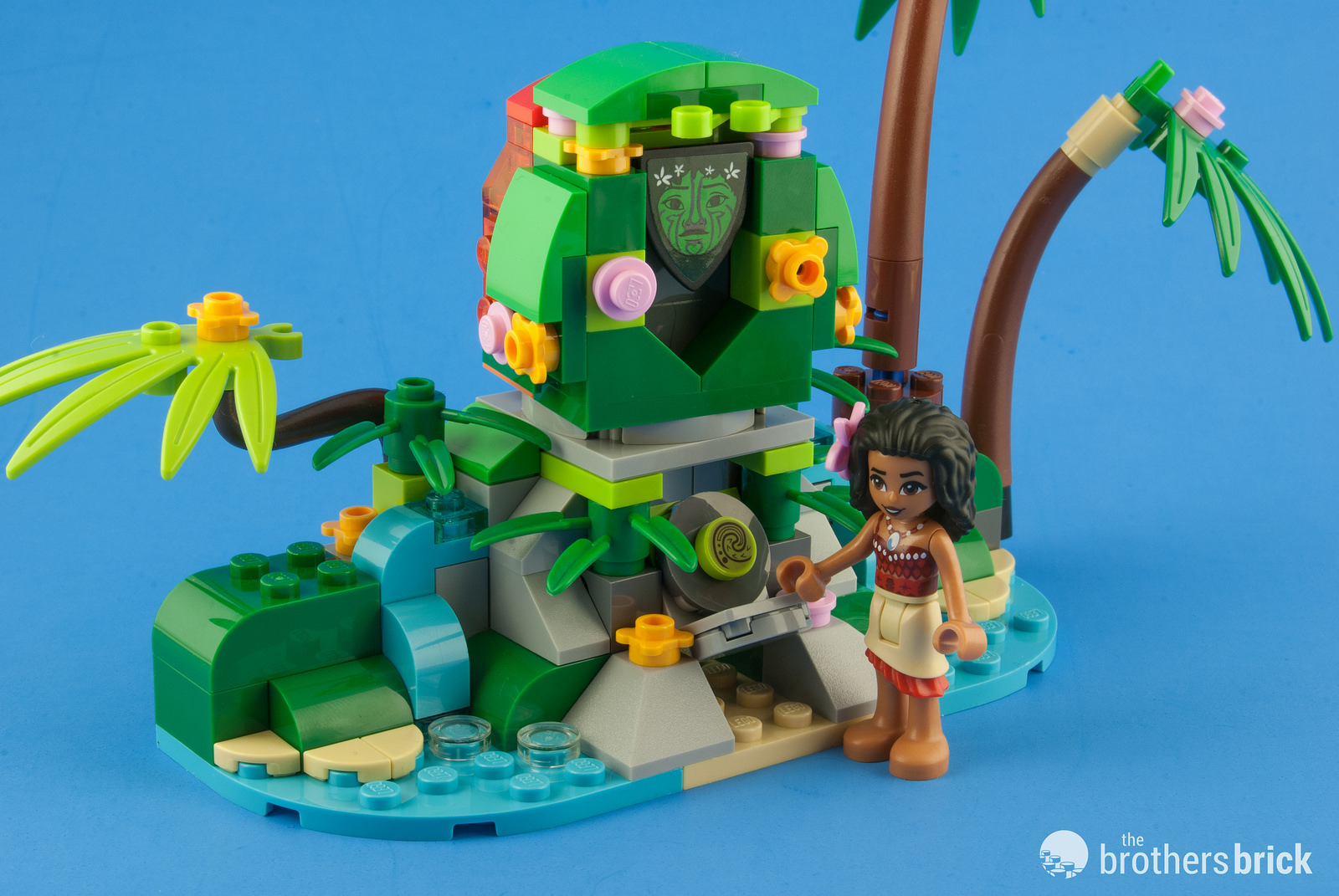 Spin Te Fini’s head around and you face Te Kā. I think this is a great way of translating that piece of the plot into a LEGO set. Te Fini and Te Kā’s heads are both stickers on black classic triangular shields. Like in the other Moana set, the Heart of Te Fini is a printed 1×1 round tile. 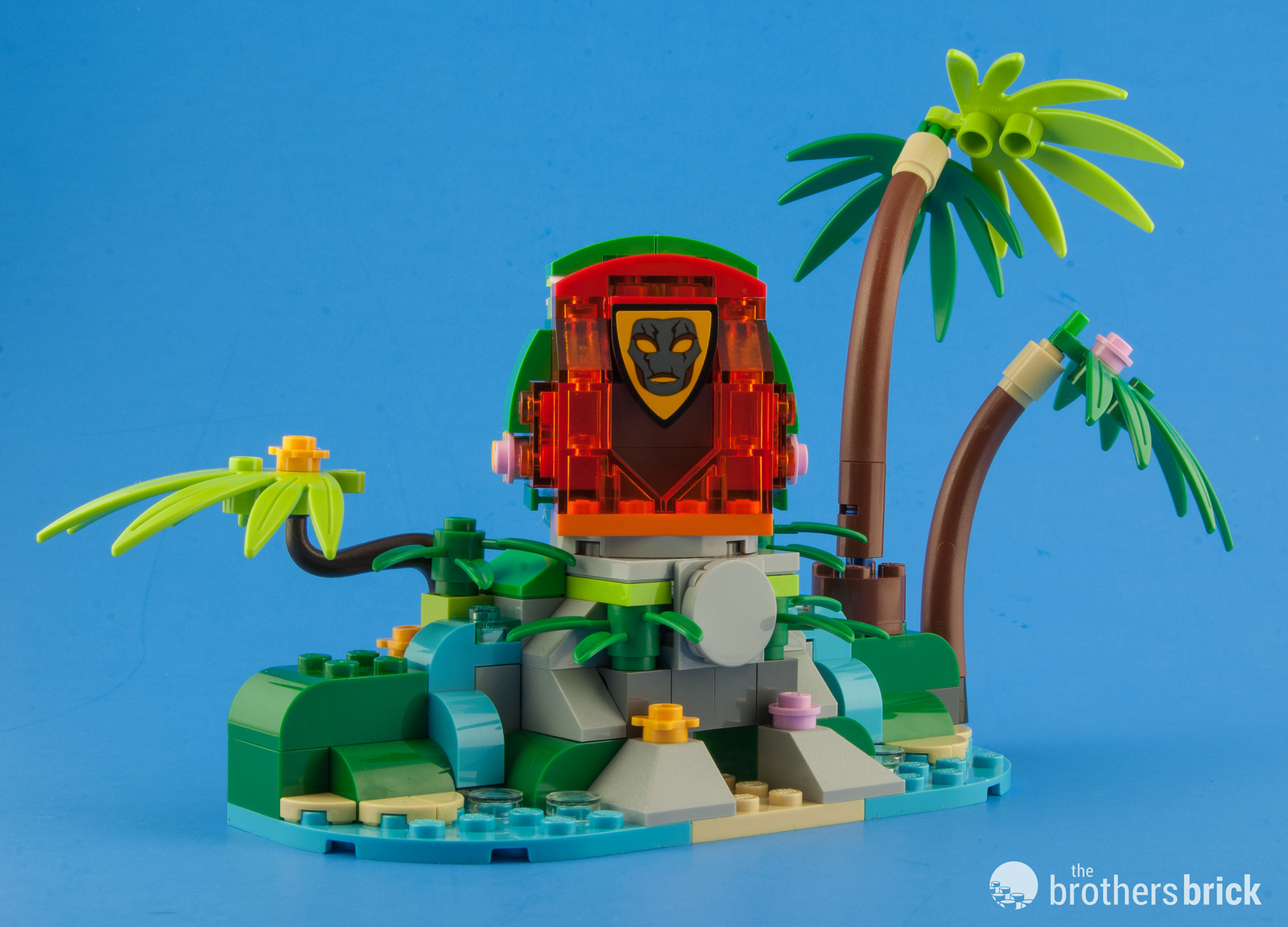 The design on the outrigger canoe is excellent and Te Fini is beautiful.There are decent parts, and plenty in useful colors (yay for tan!). This is currently the only way to get Maui, and Moana is unique to the set.

Don’t miss our review of 41149 Moana’s Island Adventure, too!