The Southern Air Temple was a location in the animated series Avatar: The Last Airbender and the childhood home of the main protaganist in the series, Aang. Micah Beideman has built a LEGO version of the Southern Air Temple, capturing the impressive collection of blue roofed buildings and the tall tower dominating the centre of the white temple. The lower buildings have been built at a nice depth and varying heights to give the model a real ‘temple in the sky’ feel with their steep winding paths. I also like the use of the transparent 1×2 bricks, built up to form the clouds that encircle the temple. 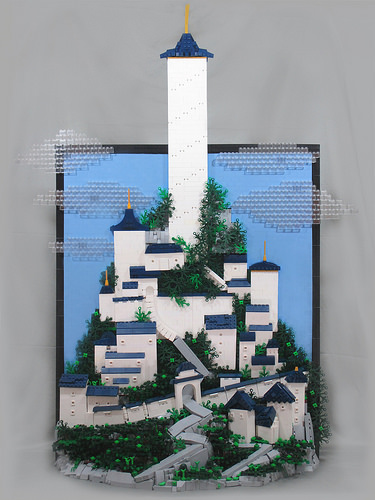 The central tower takes this build to about 114 studs tall — that’s 90cm. When it comes to measuring depth,  this build becomes even more interesting as the central tower is actually only one brick in depth and 2-D rather than circular.  The  sloped ‘conical’ roof helps enforce this impression but the use of the 1×1 round studs in a twisting pattern is the key to turning a 2-d tower into a 3-D tower in the photograph. 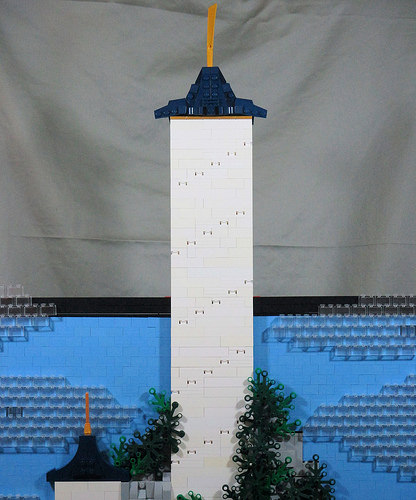 Micah bravely shared a side view photograph of his temple that demonstrates the typical, simple mechanisms we often employ to ensure our LEGO builds maintain their structural integrity. In Micah’s case, his temple needed a little extra support from string and jars of tomato sauce after gravity began to take its toll.