Why does all the crazy news seem to be from Florida?

That’s a line I never imaged using in opening a review of LEGO set, but look closely at the bumpers on The LEGO Batman Movie‘s 70907 Killer Croc Tail-Gator, and you’ll spy Florida plates on this backwoods monster truck due out January 1, ahead of the film’s February 10 release date. The set has 460 pieces, and will retail for $69.99. Ready to take a trip to swampy roads of the everglades? Let’s dive in. 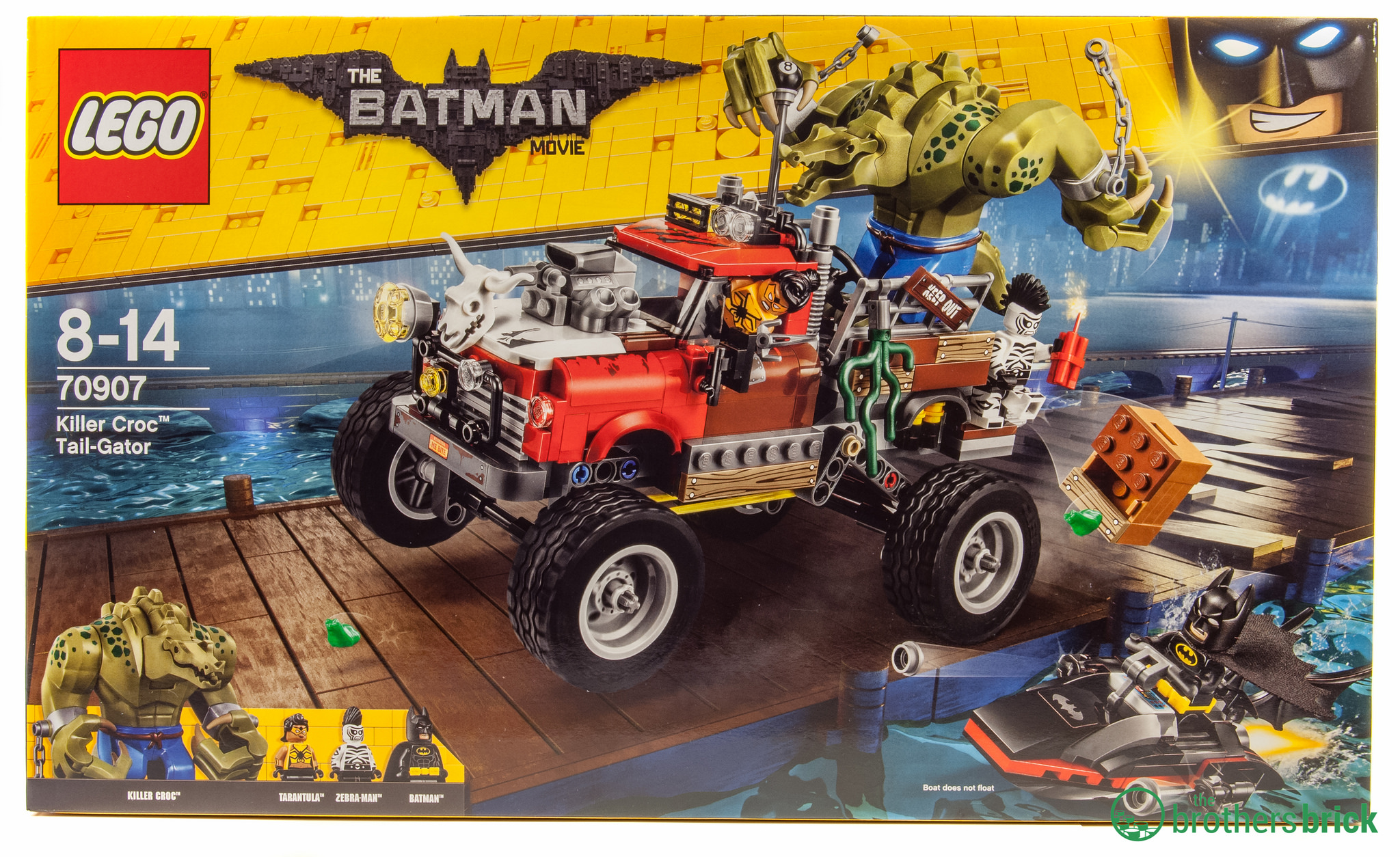 If OBJECTS IN MIRROR ARE CLOSER THAN THEY APPEAR, you definitely don’t want to see 70907 Killer Croc Tail-Gator in yours. This is a large, beat-up truck, the sort you’d see stopped on the side of a muddy road, its occupants skinning a questionable piece of roadkill. The box art seems to imply Croc is fresh off the boat from Florida to Gotham, and he’s chased by Batman on a Batski. Let’s see how he fares against the World’s Greatest Detective — or should I say, World’s Greatest Investi-gator. 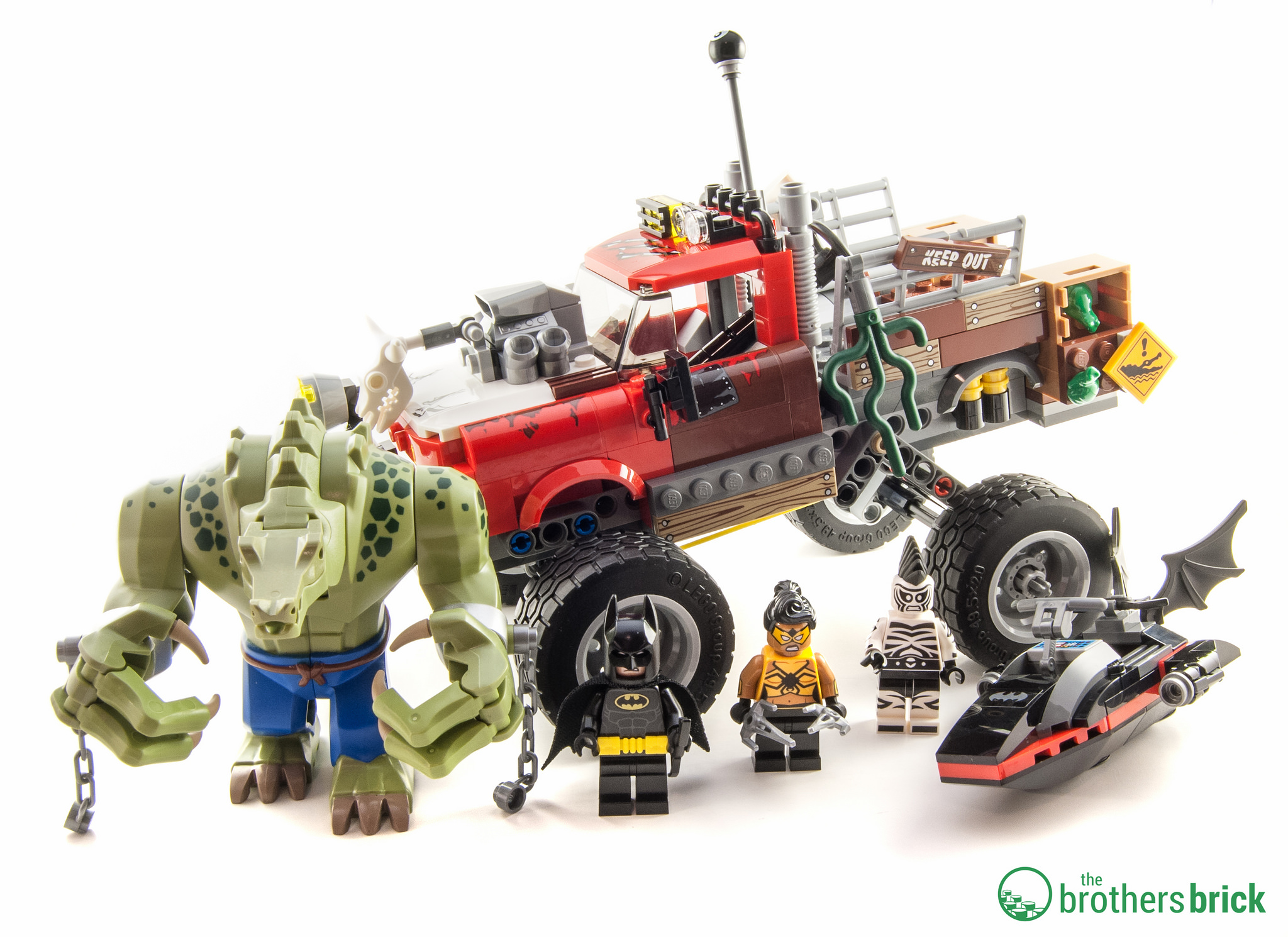 The bulk of the 460 pieces go into the truck, which is huge: each tire is taller than Batman. There are 4 numbered bags and 2 instruction manuals. The build is a simple, straightforward process with very few SNOT techniques. The chassis is a pair of 16-long grey Technic beams, which support the truck’s main play feature of rear suspension, held up with rubber bands. Beneath the truck’s bed, a pair of 2-long rubber Technic beams help create the other play feature, which I’ll cover below. 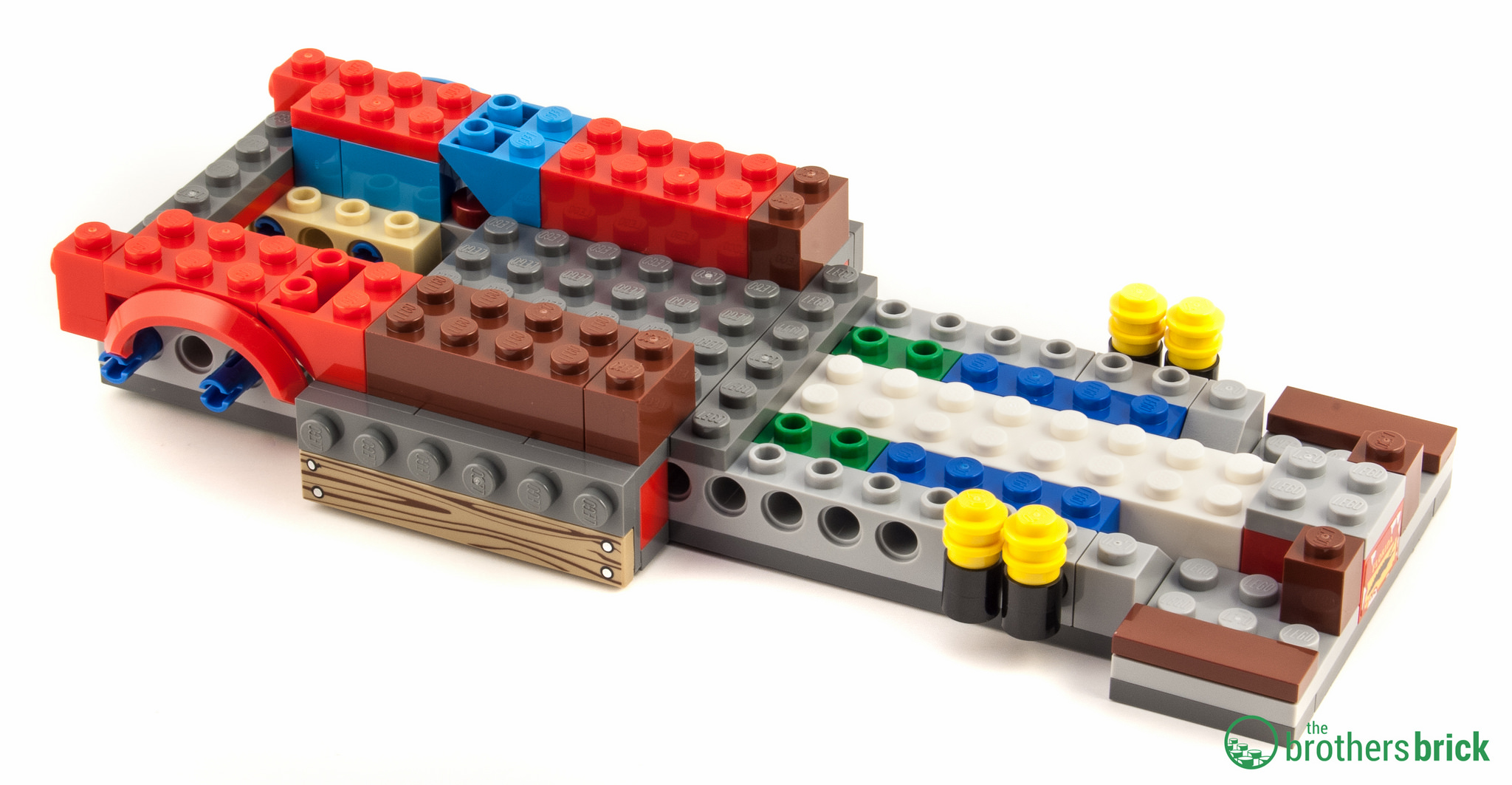 The truck is predominately red, though like all good trucks from the boondocks, the right front quarter panel is blue (dark azure, actually). Who can tell if the white hood is part of the truck’s original two-tone paint scheme, or a replacement after that incident with the cow? And the red paint on the doors is slowing succumbing to brown rust — moreso on the left than on the right. The big dings on the hood, doors, roof and quarter panels are all stickers. The bed of the truck has been replaced at some point with a flatbed, and fences (jail doors) are stuck to the sides for an enclosure, over which wooden boards are nailed. The wooden boards are all printed dark tan tiles, and you’ll get a nice handful: 3 1×6 tiles, and 5 1×3 tiles. The signs plastered on the truck bed are all stickers. 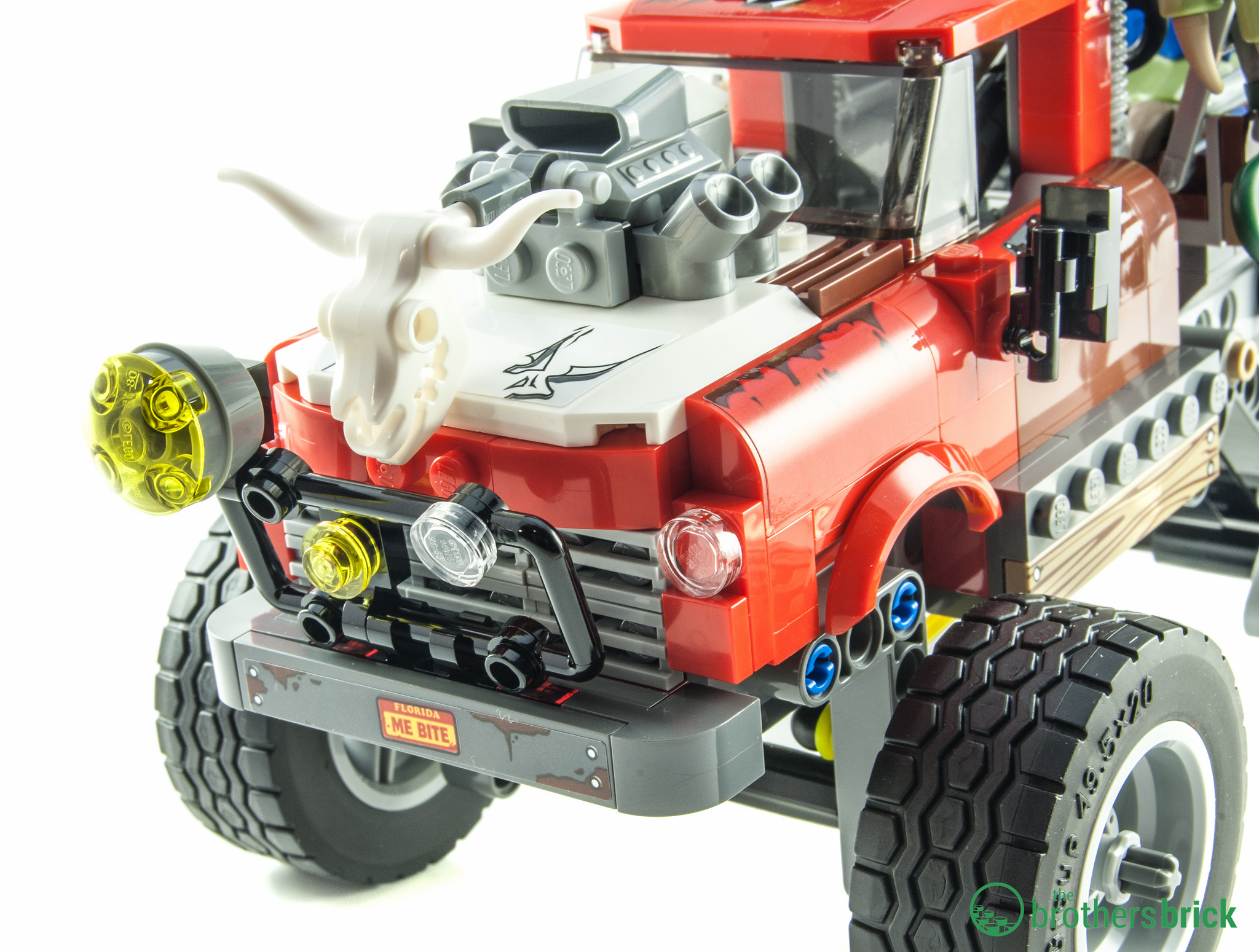 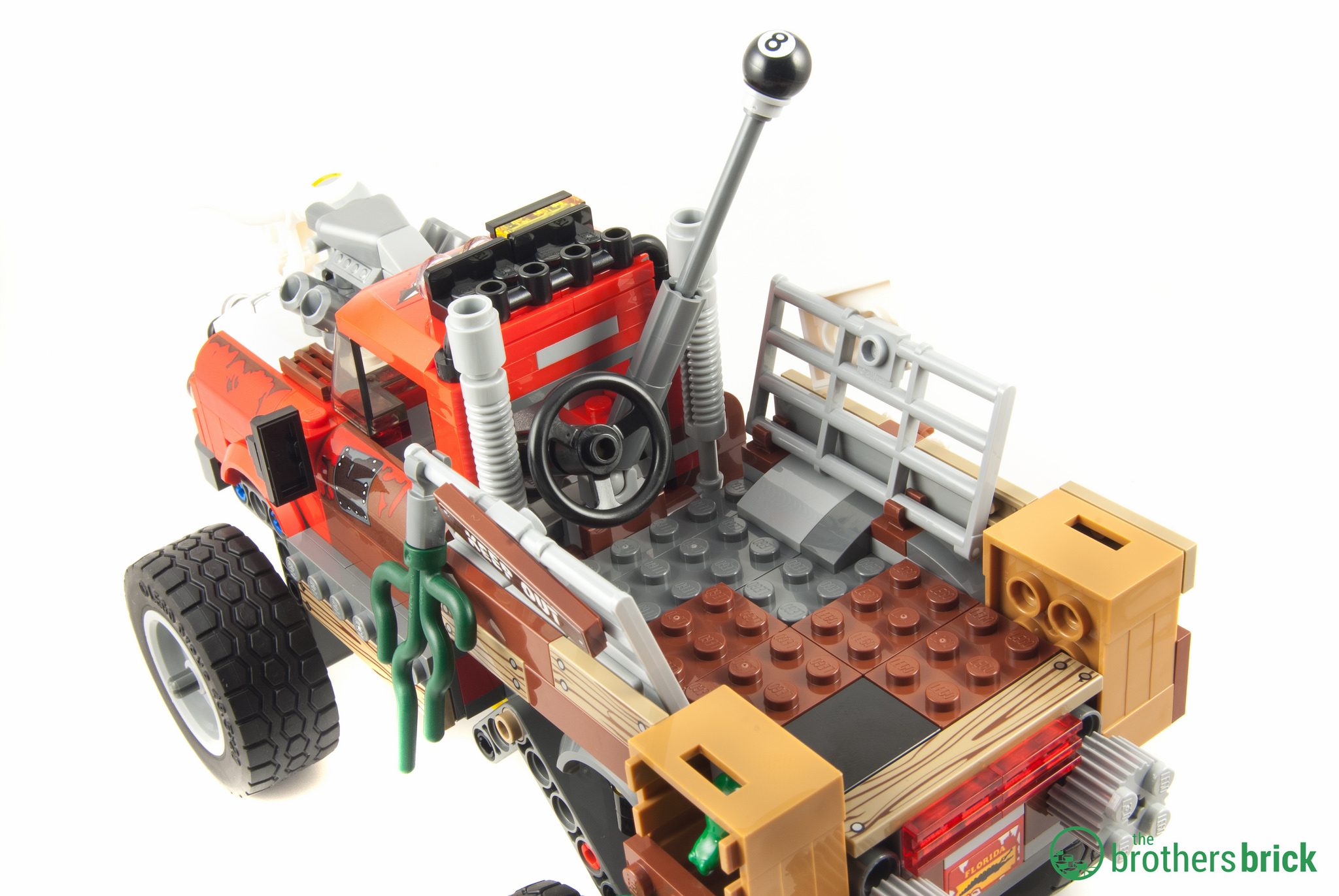 Now, Killer Croc is a huge fellow, far too large to fit in the cab of a vehicle even in LEGO Batman’s insane universe. So, he’s done the only sensible thing — he extended the steering column up through the cab into the bed, so he can stand in the bed and drive the truck like a go-kart. He’s also got a gear shifter with an 8-ball knob — you didn’t expect this piece of junk to be an automatic, did you? The 8-ball is a printed piece, and will surely find lots of great uses in fan models. 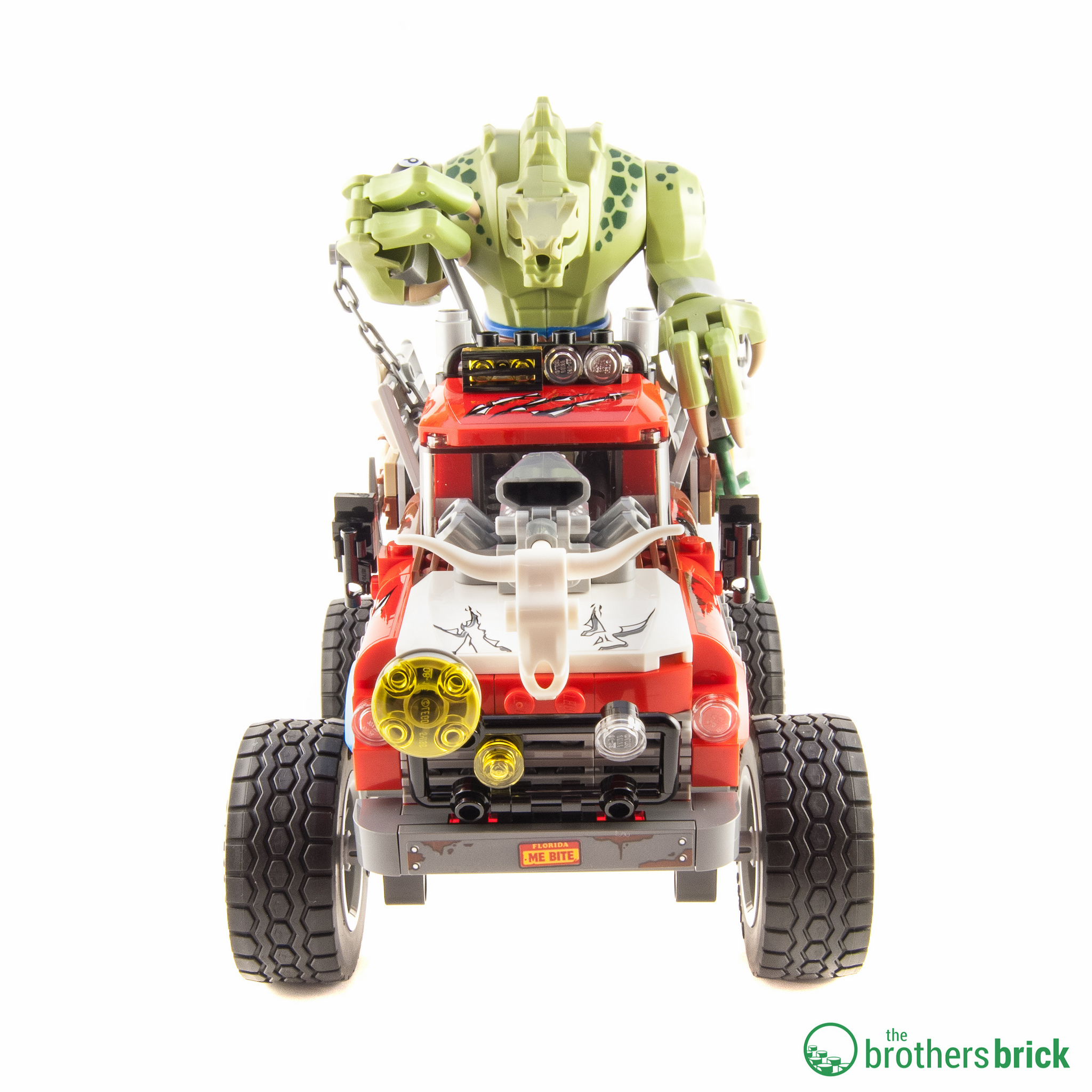 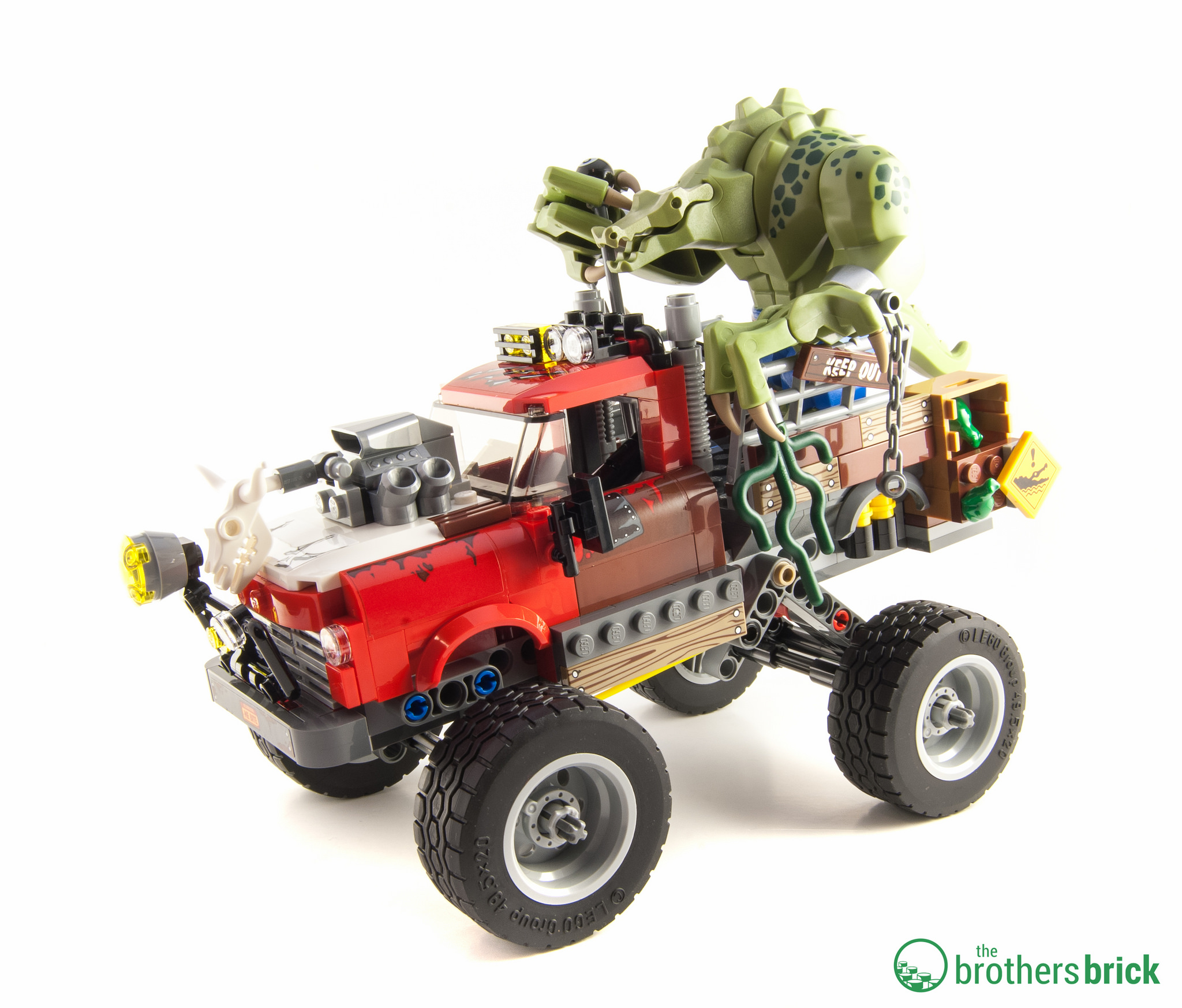 The play features on the truck are limited. Although there’s rear suspension, the rear axle is solid, so both wheels move up and down together. There’s only about a half inch of travel in the suspension, so don’t expect to get too much mileage from this exciting feature. 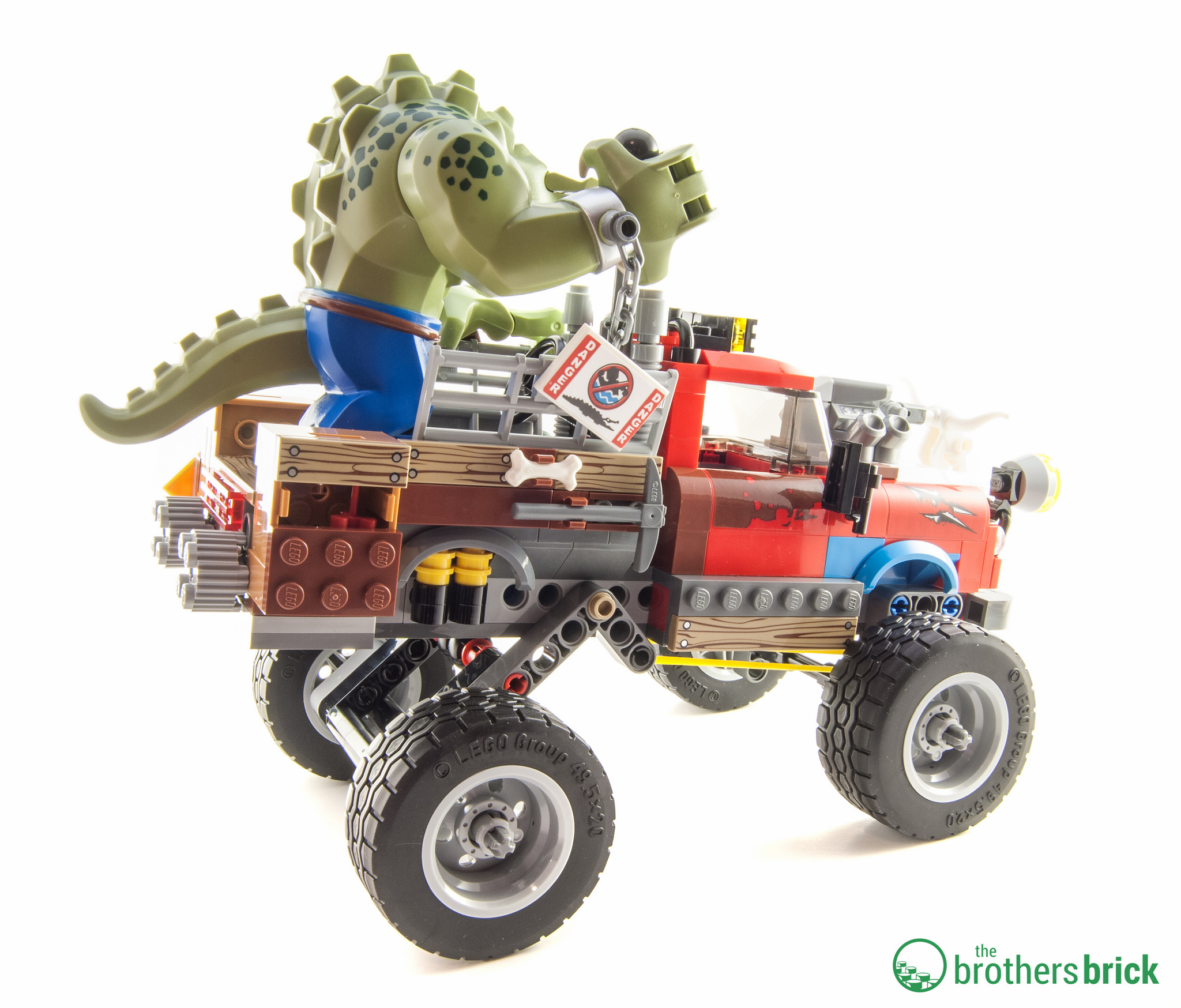 The truck’s other play feature is a pair of crates attached to either side of the truck bed, activated by dials on the back on the truck (which are positioned such that I’d think they were oversized exhaust pipes, except that this truck has the only exhaust more gaudy than ridiculously huge tailpipes: smokestacks). Tilting a knob just a little bit forces the one of the two crates affixed to the sides of the truck to dump off, presumably spreading its cargo around Gotham and creating havoc. 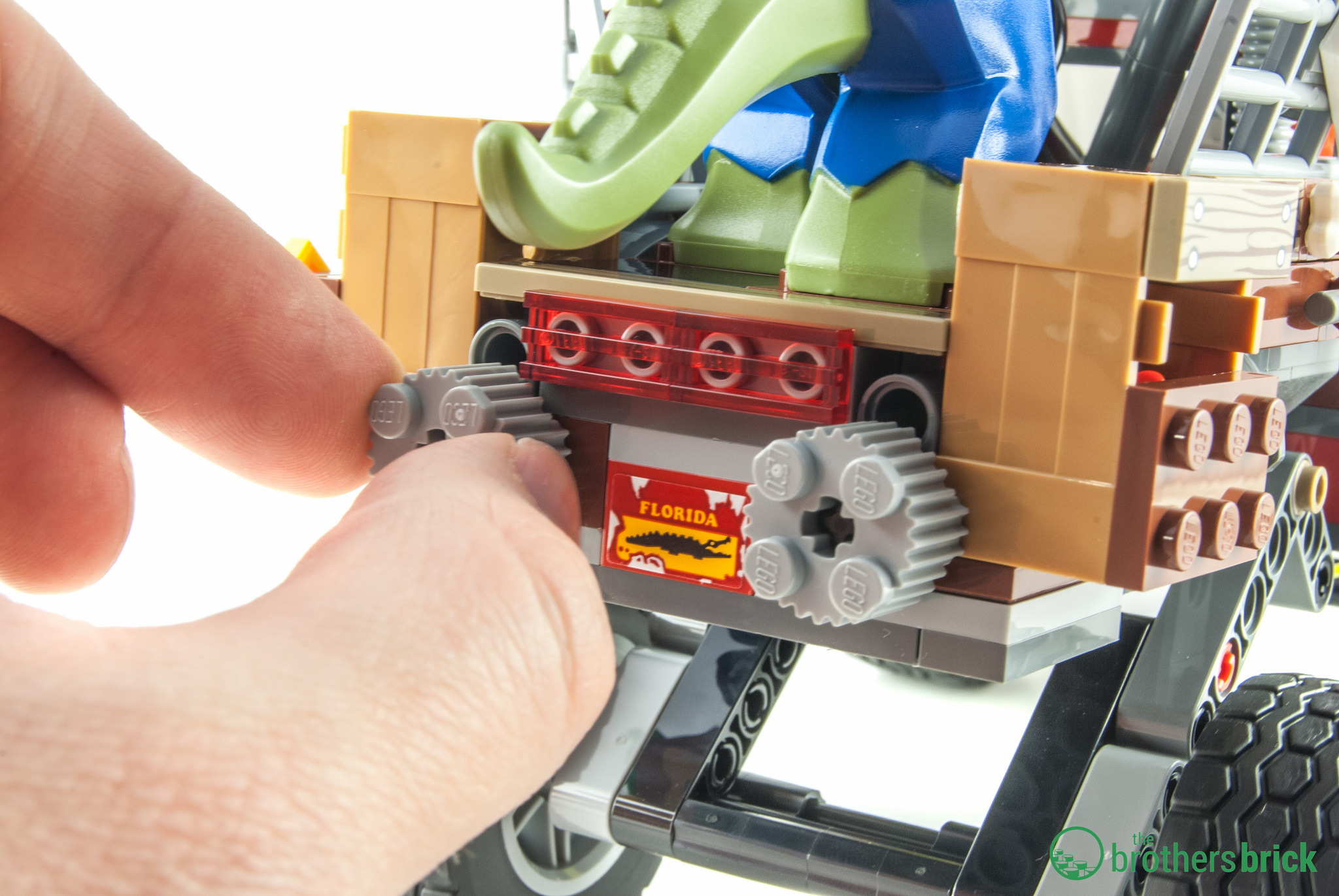 What is that cargo? On the right side, it’s a crate of dynamite, which seems logical for Batman baddies to fling about. The other box, though, is a crate of frogs. Perhaps Killer Croc is getting biblical and reenacting the ten plagues. 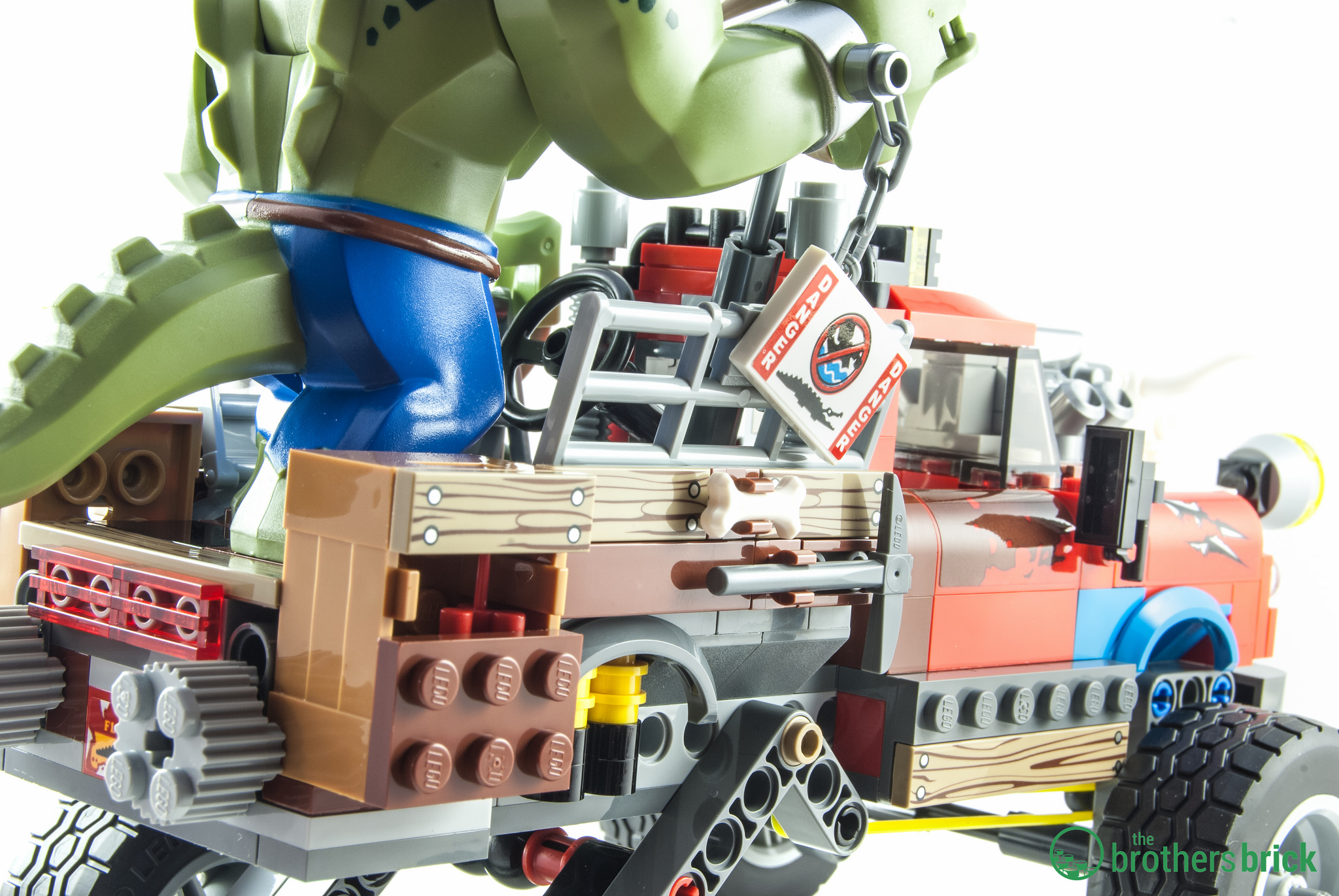 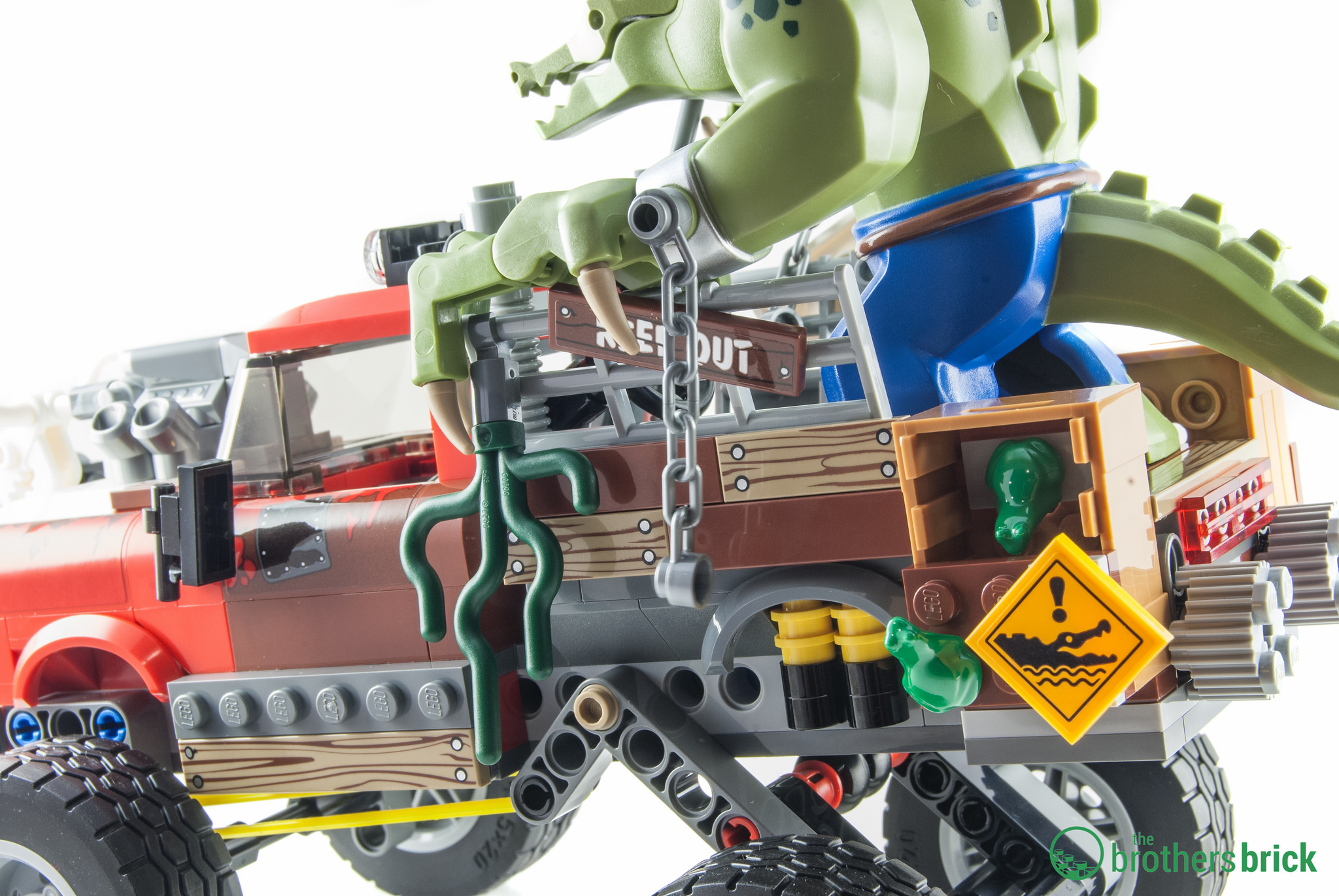 Let’s not forget Batman, here. To combat this monstrous truck, Batman has his trusty Batski. It’s a pretty standard-looking jetski, but it’s nicely designed with movable handlebars and curved slopes. Paint it black, slap a bat logo and some bat wings on it, and it’s no longer a jetski, it’s a Batski! Add some stud shooters and a batarang holder, and call it day: the baddies are toast. My one gripe here is that the boat studs on the bottom, which let it glide gently over carpet, make it tip over on hard surfaces like a table. Perhaps we can imagine that Batman is permanently pulling a hard turn. Let’s just hope the inclusion of a personal-watercraft chase doesn’t foretell the movie’s critical reception. 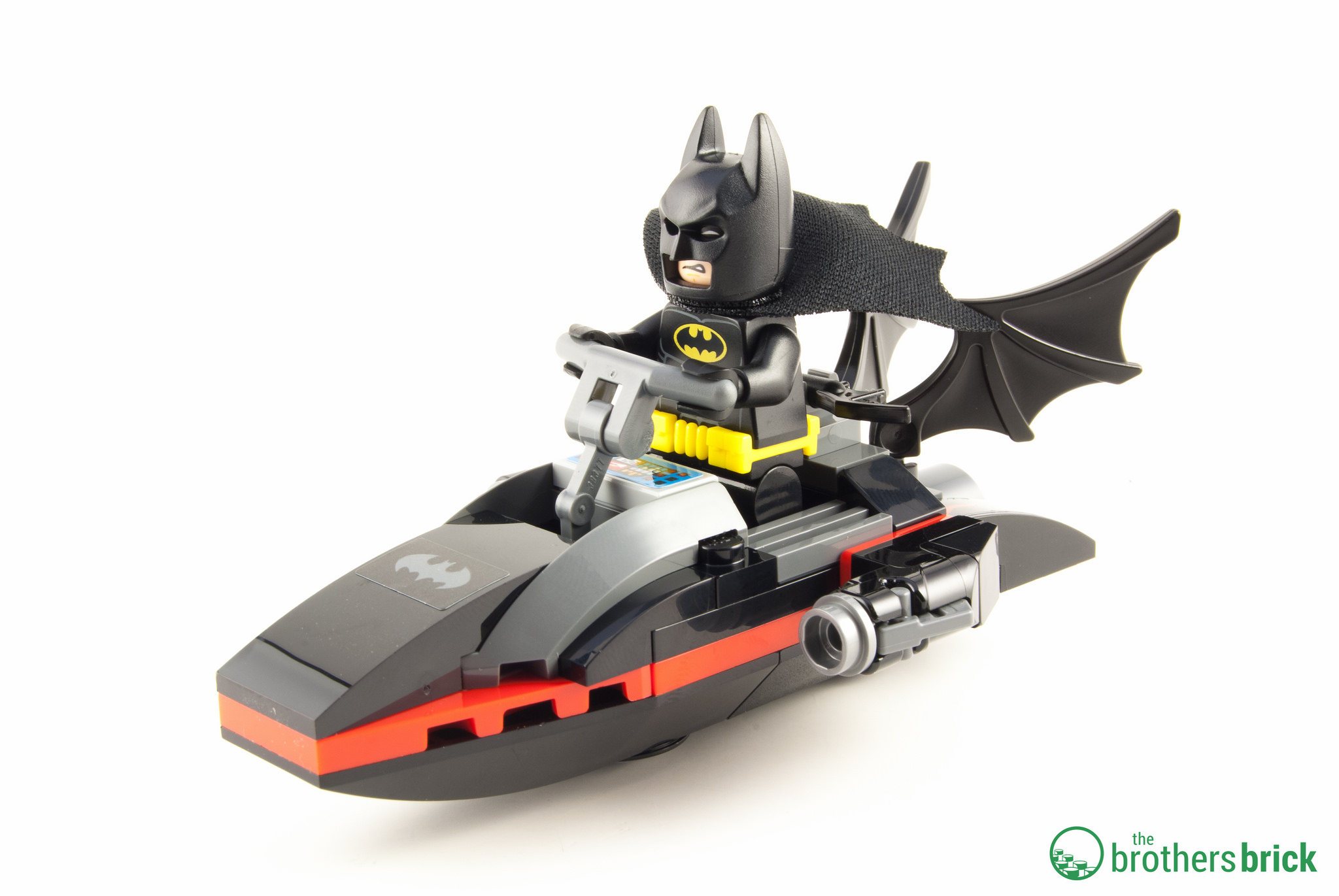 Killer Croc’s Tail-Gator includes four minifigures, though one of them is pushing the bounds of mini-figure. 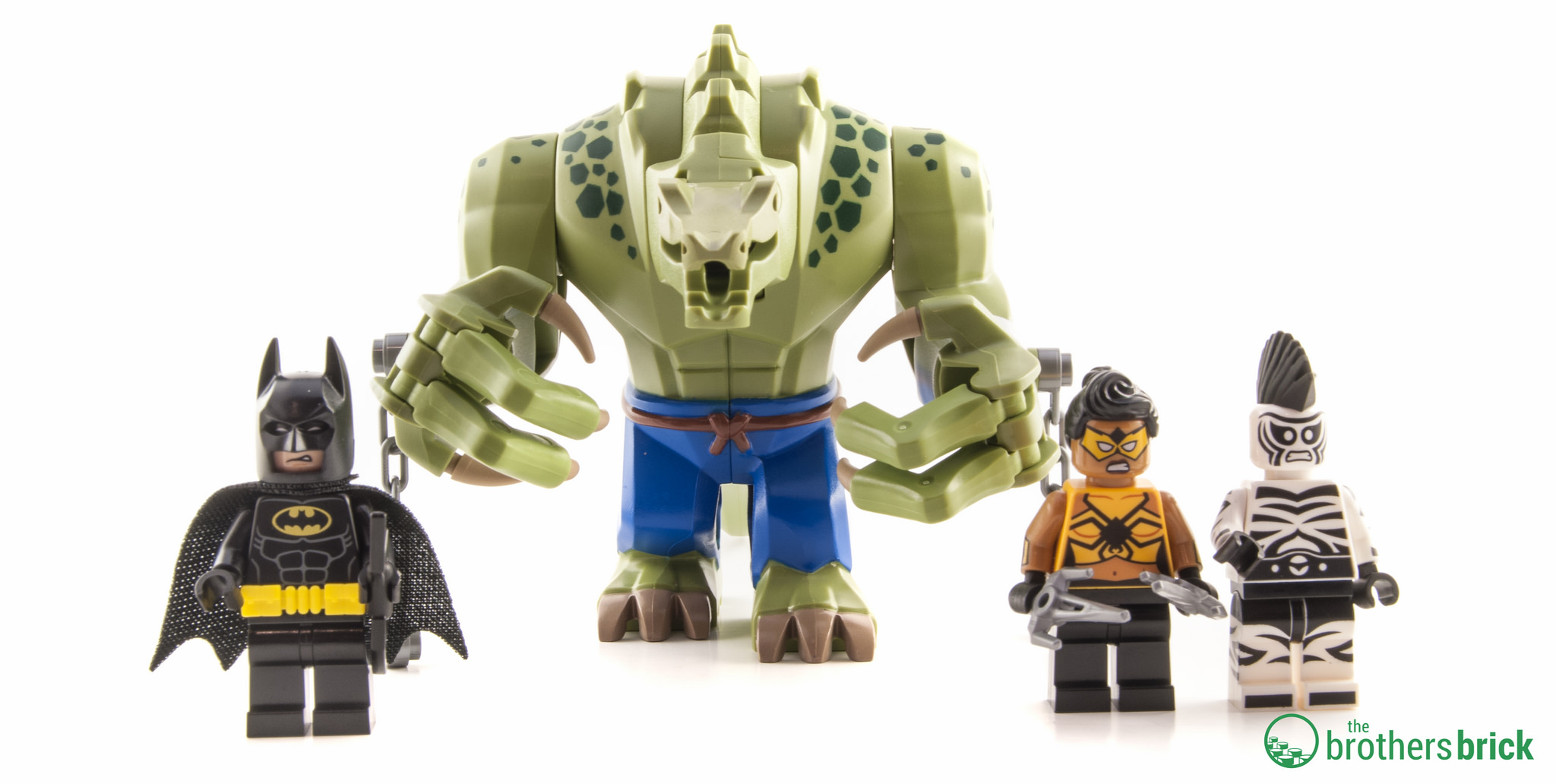 Batman is the the same figure included in previous Batman sets we’ve reviewed: 70911 The Penguin Arctic Roller and 70905 The Batmobile. To recap: He’s got a soft-cloth cape, a new yellow utility belt piece, and a two-sided head with alternate determined and dismayed expressions. 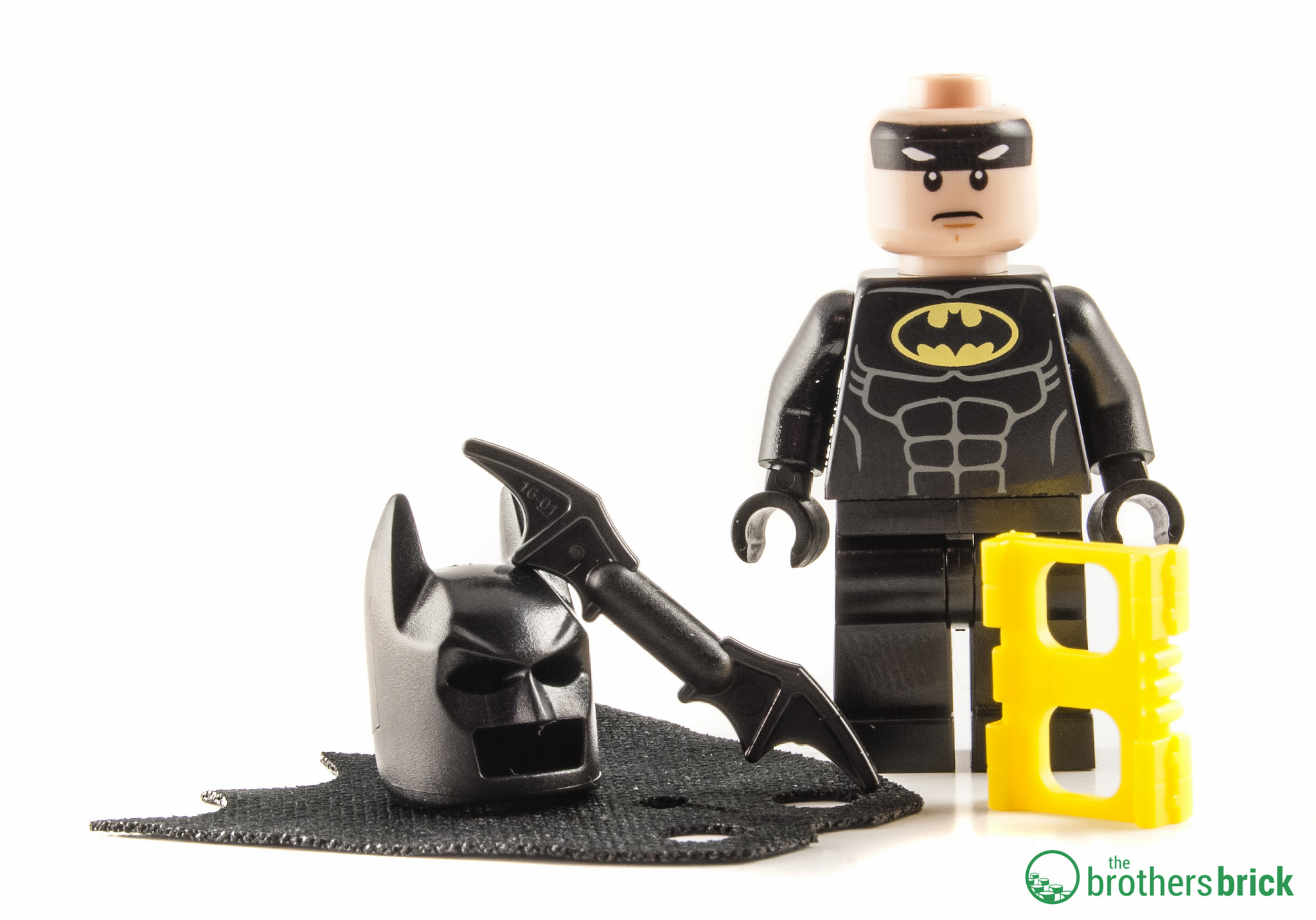 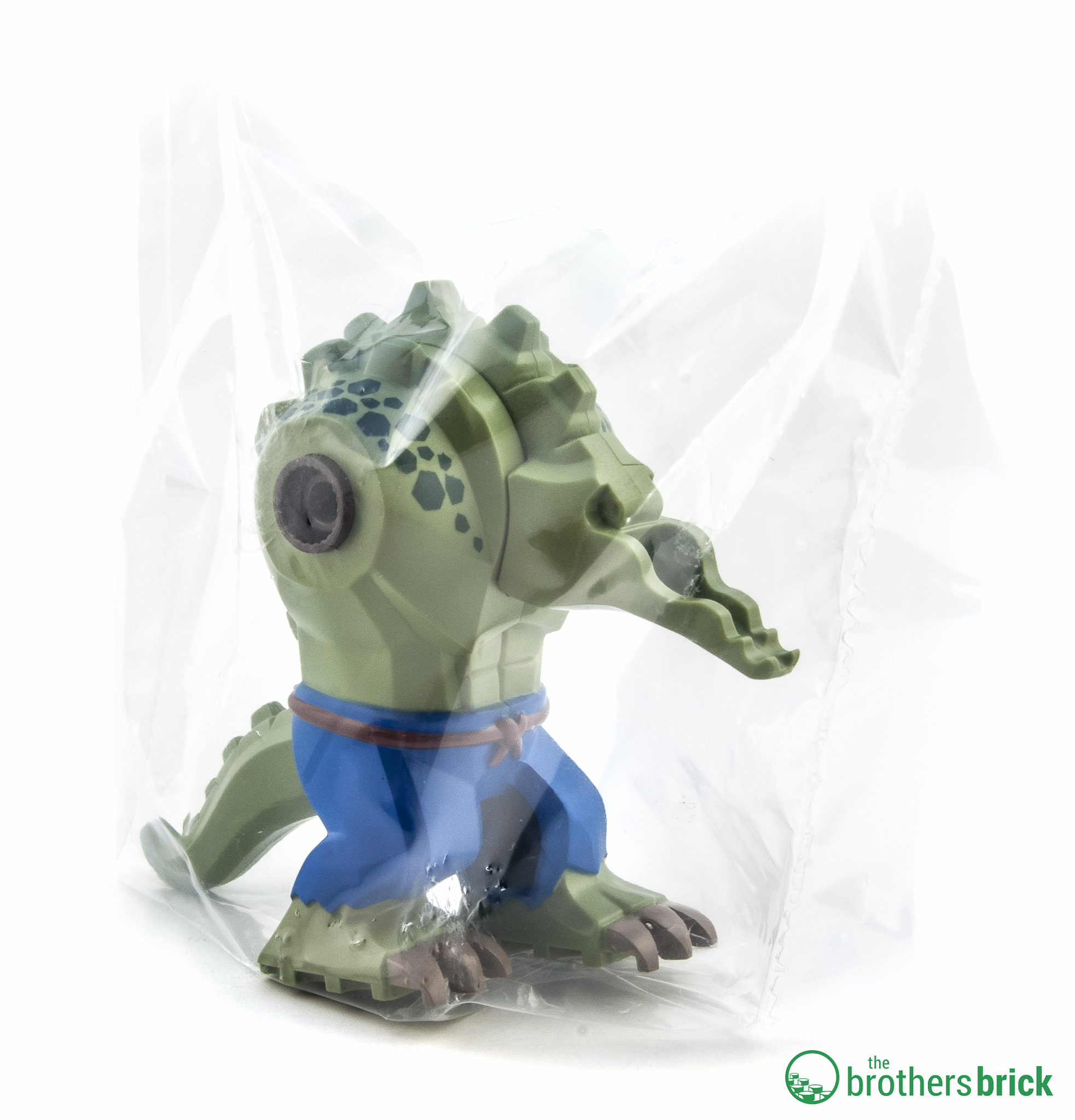 Killer Croc is a large Hulk-like figure. The main torso is a single piece (an insta-gator, if you will) that comes in its own bag. Croc’s body is olive green, with blue pants and a brown rope belt (painted on), and printed with dark green hide spots. His massive feet each have the footprint of a 2×4 brick, and his crocodile tail is unmoving. Interestingly, Croc’s head uses a classic alligator jaw, not the newer style introduced last year. His central spine rotates up and down, allowing the head to be moved. The arms are similar to the Castle Fantasy-era troll’s arms but significantly larger, while the hands and fingers are from the Star Wars rancor. With his poseable fingers and chomping mouth, he’s a much more dynamic and evocative figure than either of the previous Killer Croc minifigures (the 2006 version was a classic minifigure, and earlier this year we got a different sculpt of a Hulk-style Croc in 76055 Batman: Killer Croc Sewer Smash). 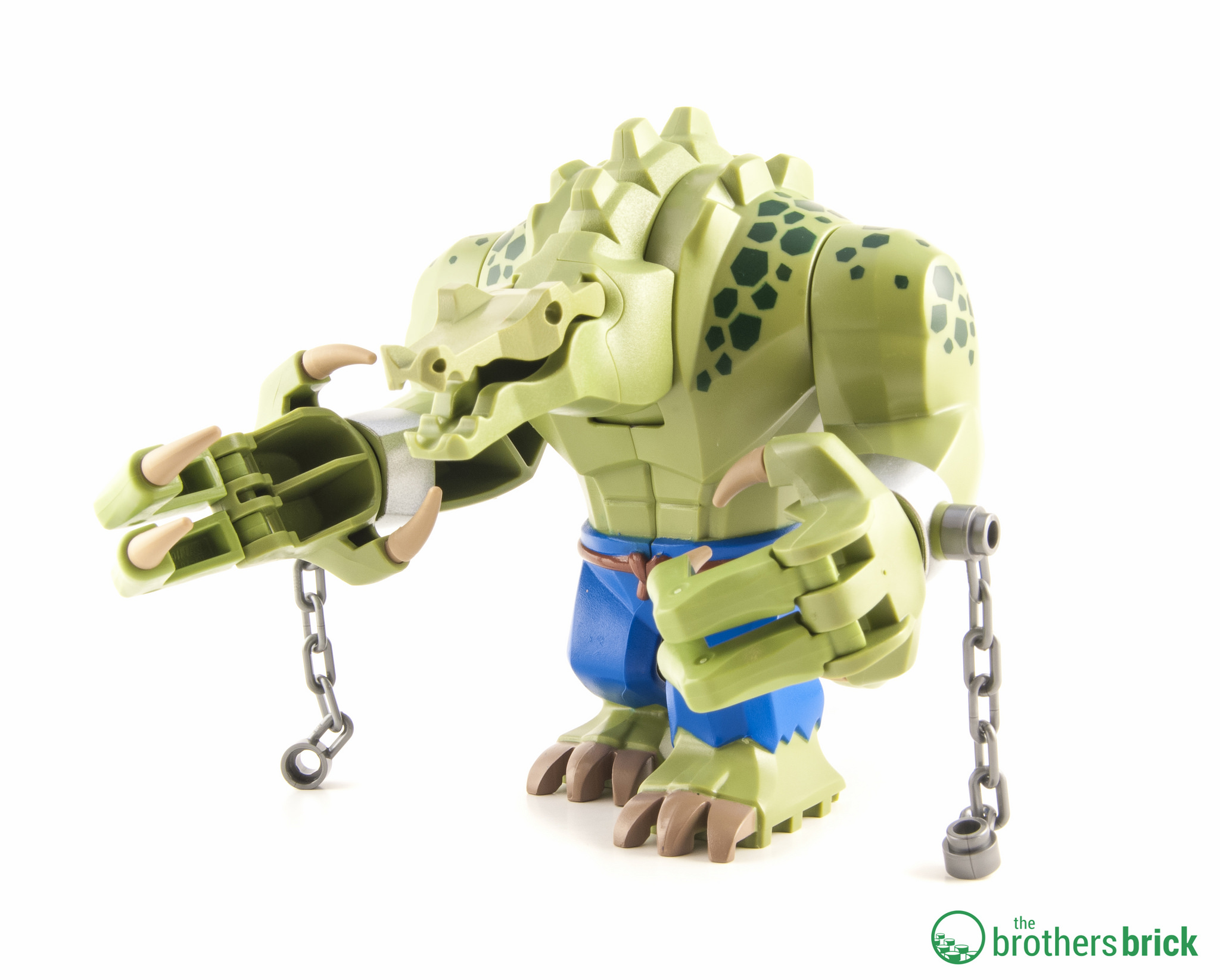 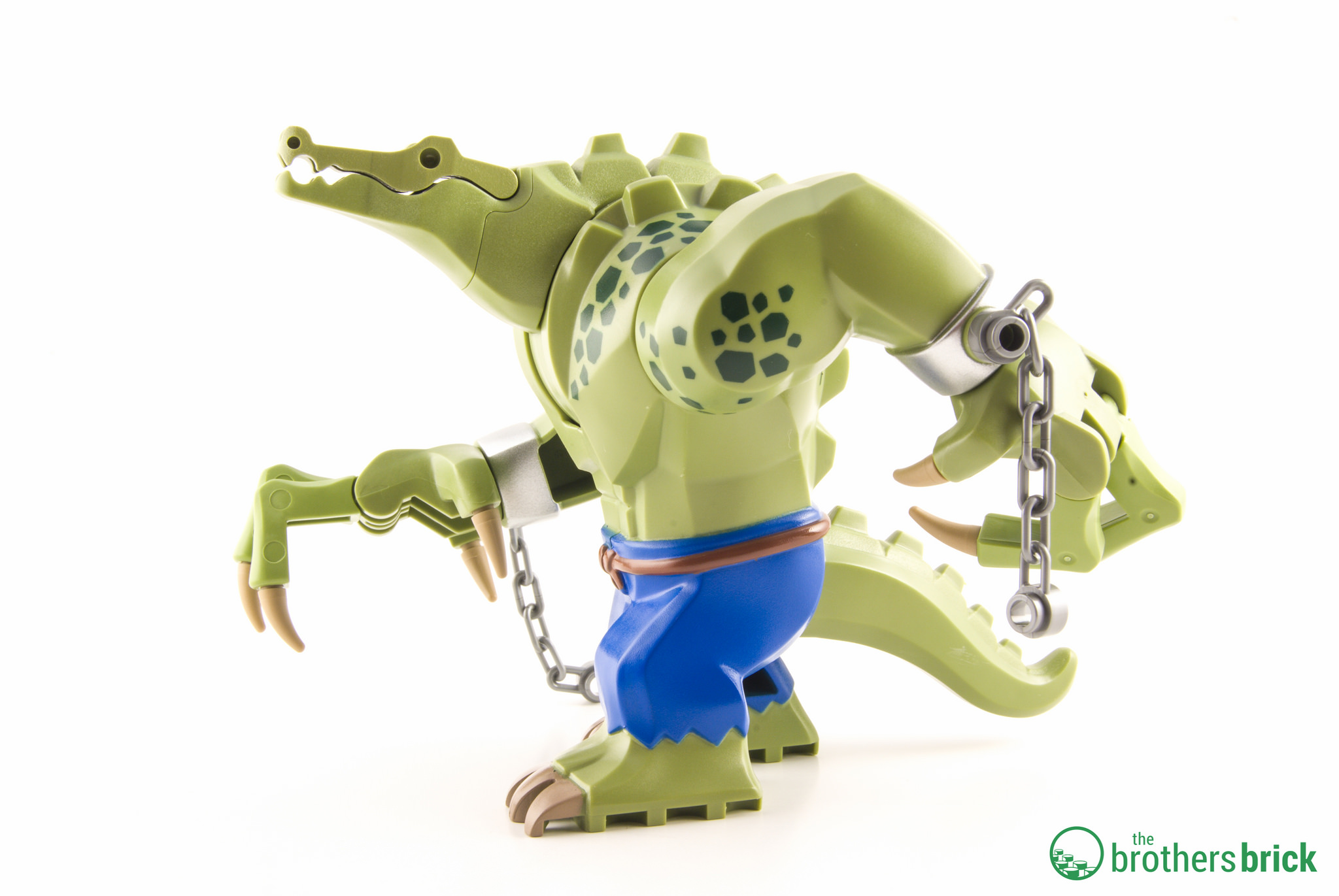 Next up is Tarantula, an old-school villain who’s been with Batman since the early years. The female iteration of Tarantula was introduced in the comics in 2002, so presumably this is that version (or a completely new one). She’s got dark tan skin printed on a bright light-orange torso with a stylized spider logo and an exposed midriff. Each arm has small printed bracers, and she wears an orange mask. The head is double-sided with a smirk and an angry face. Tarantula’s hair is a black version of the Collectible Minifigures Series 13 Car Hop’s hair, which is the first time this mold has shown up since that figure. Tarantula carries two silver daggers, and the black pants are unprinted. 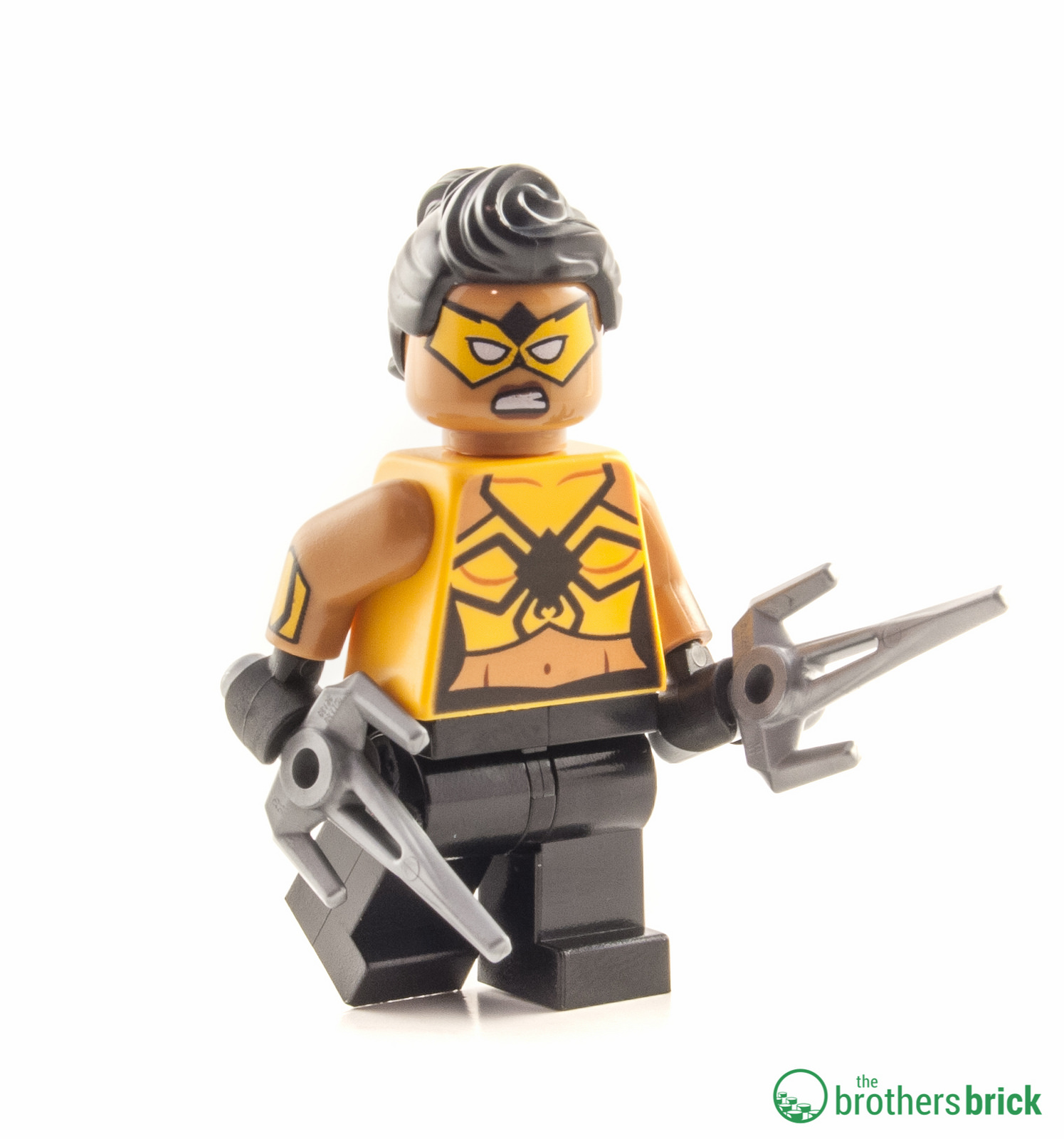 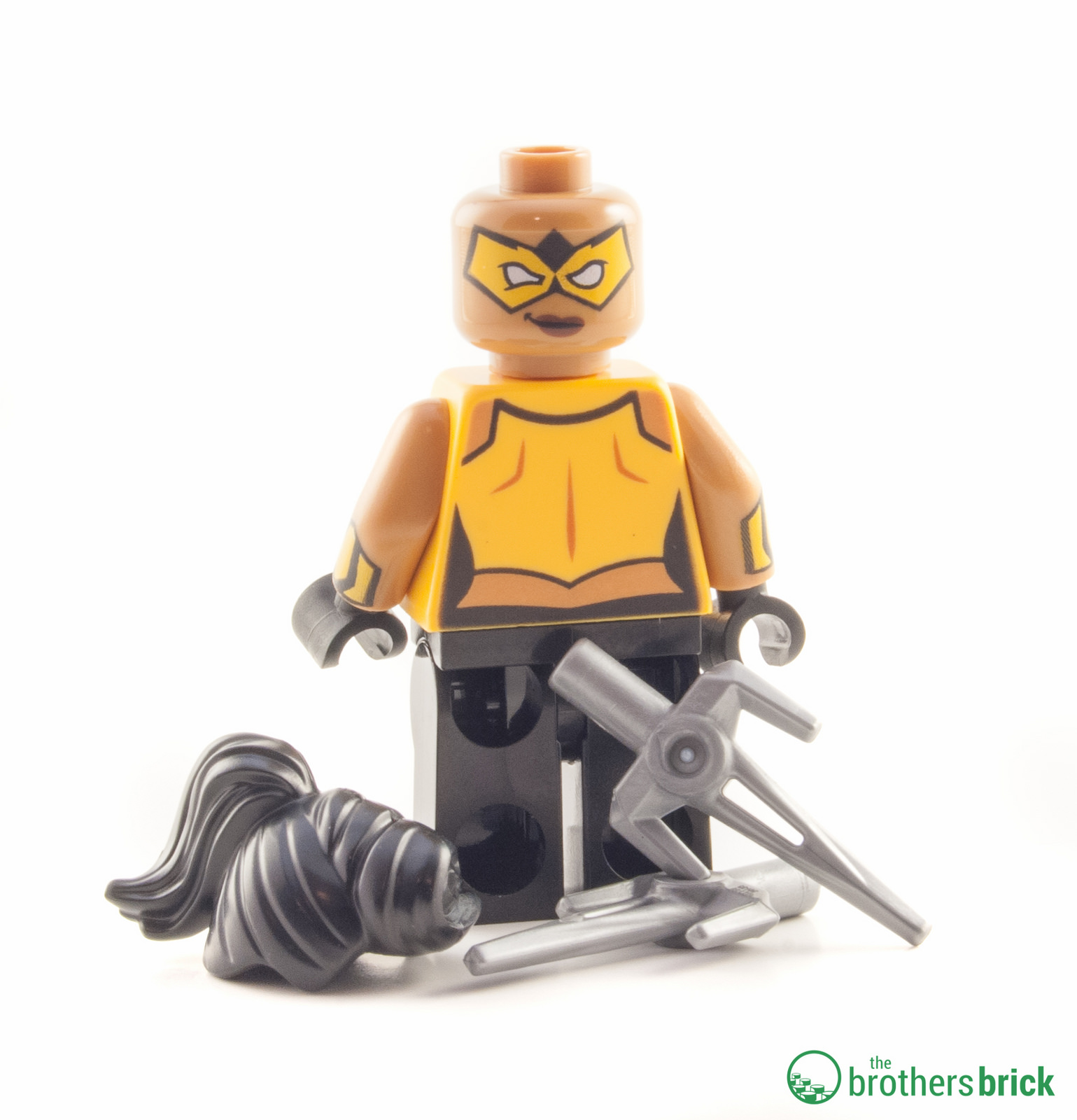 Finally, there’s Zebra Man. This version first showed up in Batman comics in 1987 and is a little-known character. The minifigure is all white, except the hips, hands, and mohawk, and completely covered in printed black zebra stripes. He doesn’t come equipped with any accessories, so I’m guessing he’s a hand-to-hand combatant when he’s not helping Croc wreak havoc from his truck. 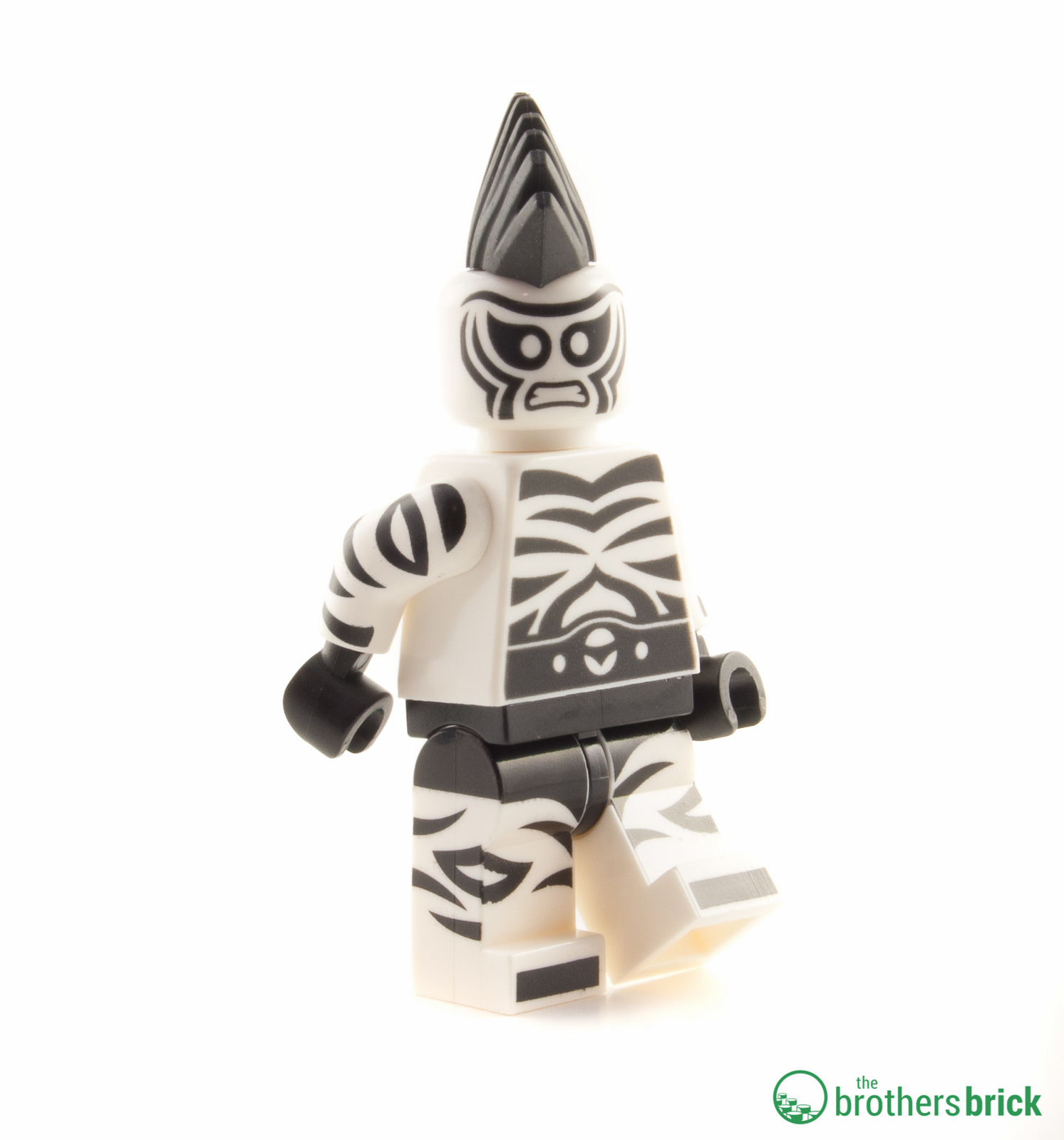 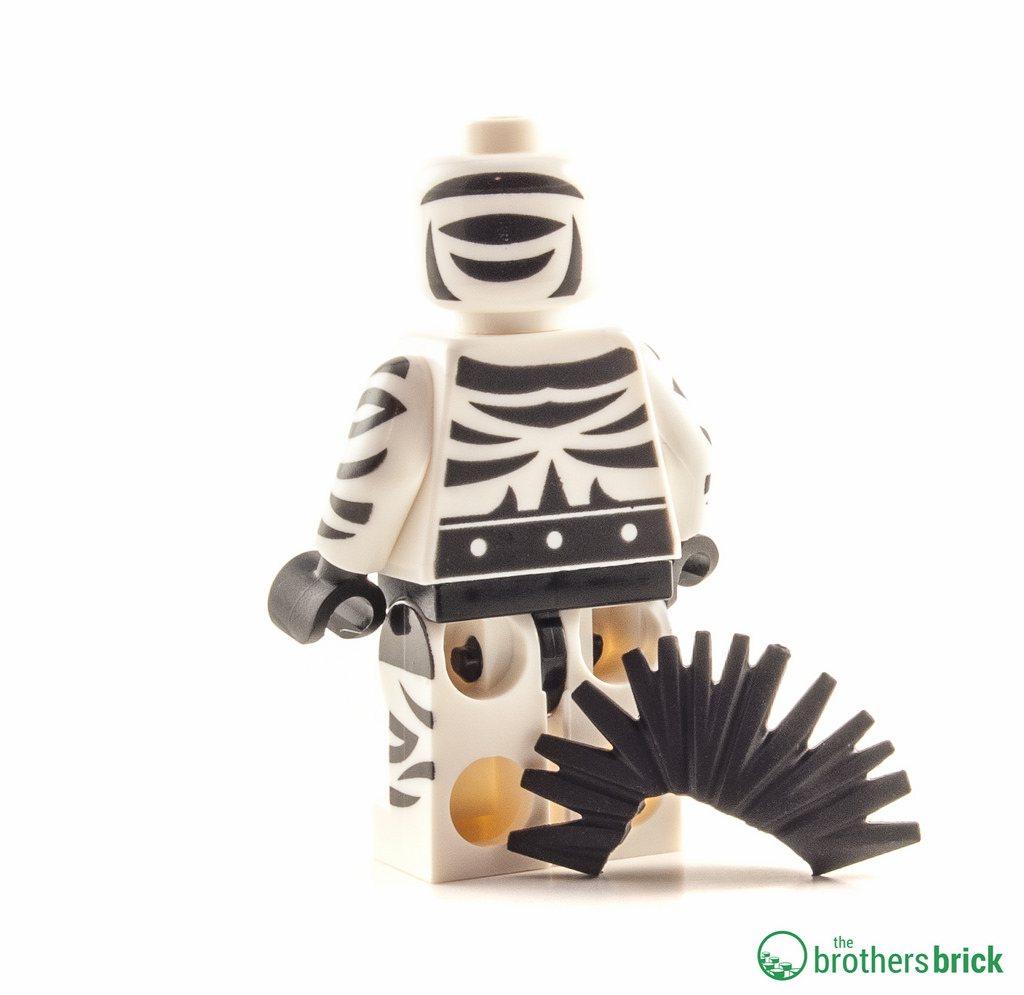 The truck is well built, although quite simple. It looks the part well, even if it is ridiculously big. At $69.99 for 460 pieces, I can’t recommend this as a parts pack; and in fact, except for the wood tiles, there aren’t too many interesting pieces here. However, most fans will be looking for this for the minifigures. Unless they play an unexpectedly large role in the film, we’re unlikely to see Tarantula or Zebra Man in minifigure form ever again, and so far this version of Killer Croc is exclusive to this set. If you’re not ready to take the plunge at full price, I recommend waiting for a good sale, then snapping up this set for the minifigures. 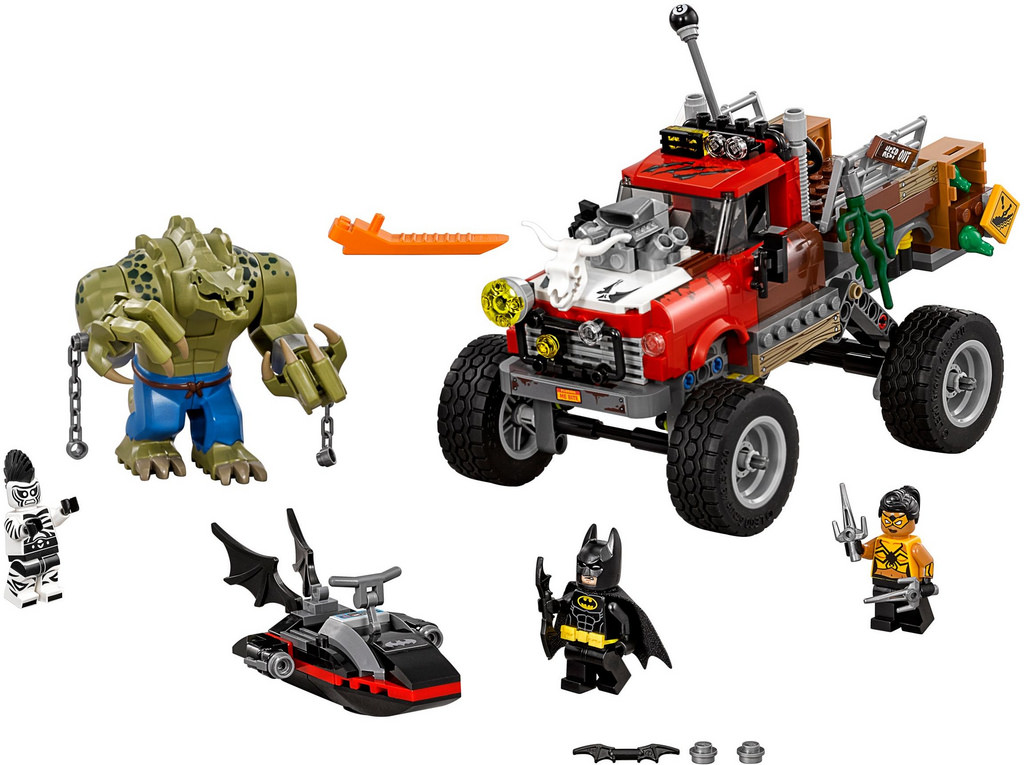