LEGO and Ford have announced a new set in their ongoing partnership that celebrates Ford’s historic Le Mans victories. The first win came in 1966 with the iconic Ford GT40, as Ford’s cars swept the board with a 1-2-3 win and cemented the company’s place on the stage as a world-class racecar manufacturer. Exactly 50 years later the Ford GT, the descendant of the GT40, placed first in the GTE Pro class at Le Mans. The new LEGO Speed Champions set contains both the Ford GT40 and the Ford GT to celebrate these wins. The new set will be available March 1 for €34.99 (£29.99). Read the full press release below, and watch a video with the set’s designer. 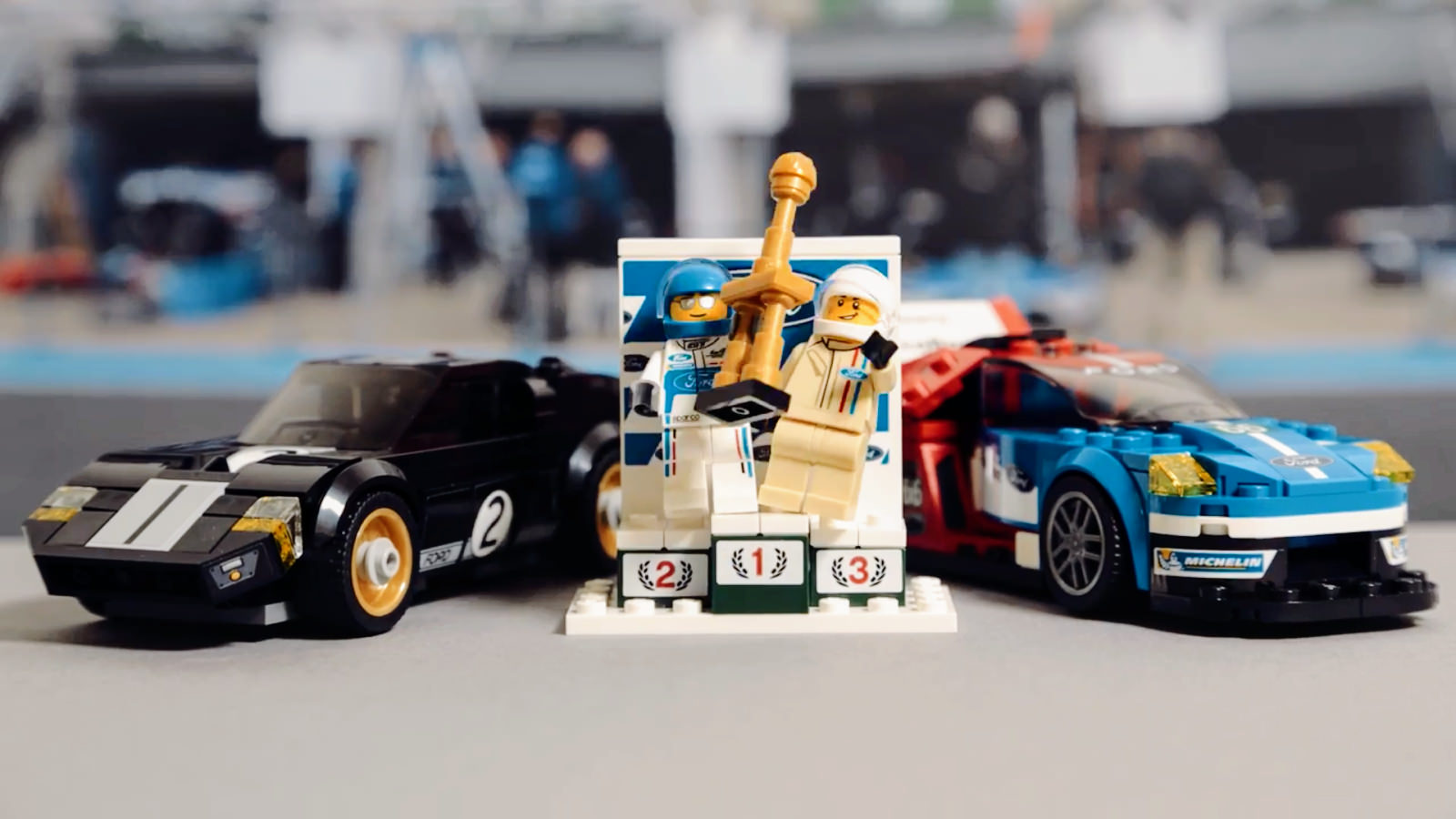 The new LEGO Speed Champions set will include both cars as well as racing driver minifigures, a chequered flag and even a trophy to make it easy to recreate those history-making victories.

“Many people in my team grew up with the legend of Ford’s history-making 1966 victory – and experienced the excitement of building and design for the first time through LEGO bricks,” said Dave Pericak, global director, Ford Performance. “This kit is a powerful way to tell our Le Mans story, and will hopefully inspire the race drivers, engineers, and designers of the future.”

Ford won at Le Mans earlier this year after returning to the scene of what was a historic 1-2-3 clean sweep 50 years previously. The LEGO Group worked closely with Ford’s design and licensing teams on every detail of the 1966 winning car, and the new Ford GT race car.

“This was a dream project – with a lot of pressure. The Ford GT40 is one of the most iconic race cars of all time, and the new Ford GT is just incredible,” said Craig Callum, head of design, LEGO Speed Champions. “Designed for children, but with grown-ups fans in mind too, we know these models will be closely scrutinized for authenticity.”

Callum, who in his spare time races a Ford Model A hot-rod, and started out as a designer of full-sized cars, helped develop ten prototypes before the final versions of each model were selected, all created from existing LEGO bricks.

You can watch Callum assemble the new kit in record time here.

The #68 Ford GT of Sébastien Bourdais (FRA), Joey Hand (US) and Dirk Müller (GER) crossed the finish line as the winner in the GTE-Pro class of the 2016 Le Mans 24 Hours.

The #2 Ford GT40 Mark II driven by Bruce McLaren (NZ) and Chris Amon (NZ) took first place at Le Mans in 1966 – leading a Ford clean sweep of the three podium positions. The 1966 race was Ford’s first ever win at Le Mans, and the first of four successive victories at the iconic endurance race.

The ultra-high-performance Ford GT supercar is the most advanced Ford production vehicle ever, featuring the latest in lightweighting, aerodynamics and EcoBoost engine technology – an innovation showcase for the Ford brand.

The Ford GT40 Mark II featured a lightweight aluminium chassis, rear-wheel drive and a 7.0-litre Ford V8 engine. The car was named the GT (Grand Touring) with the 40 representing its height at the top of the windscreen in inches.

LEGO Speed Champions puts children in the driver seat, as they build and race some of the most famous cars ever produced, with authentic designs and exciting accessories to inspire young imaginations. 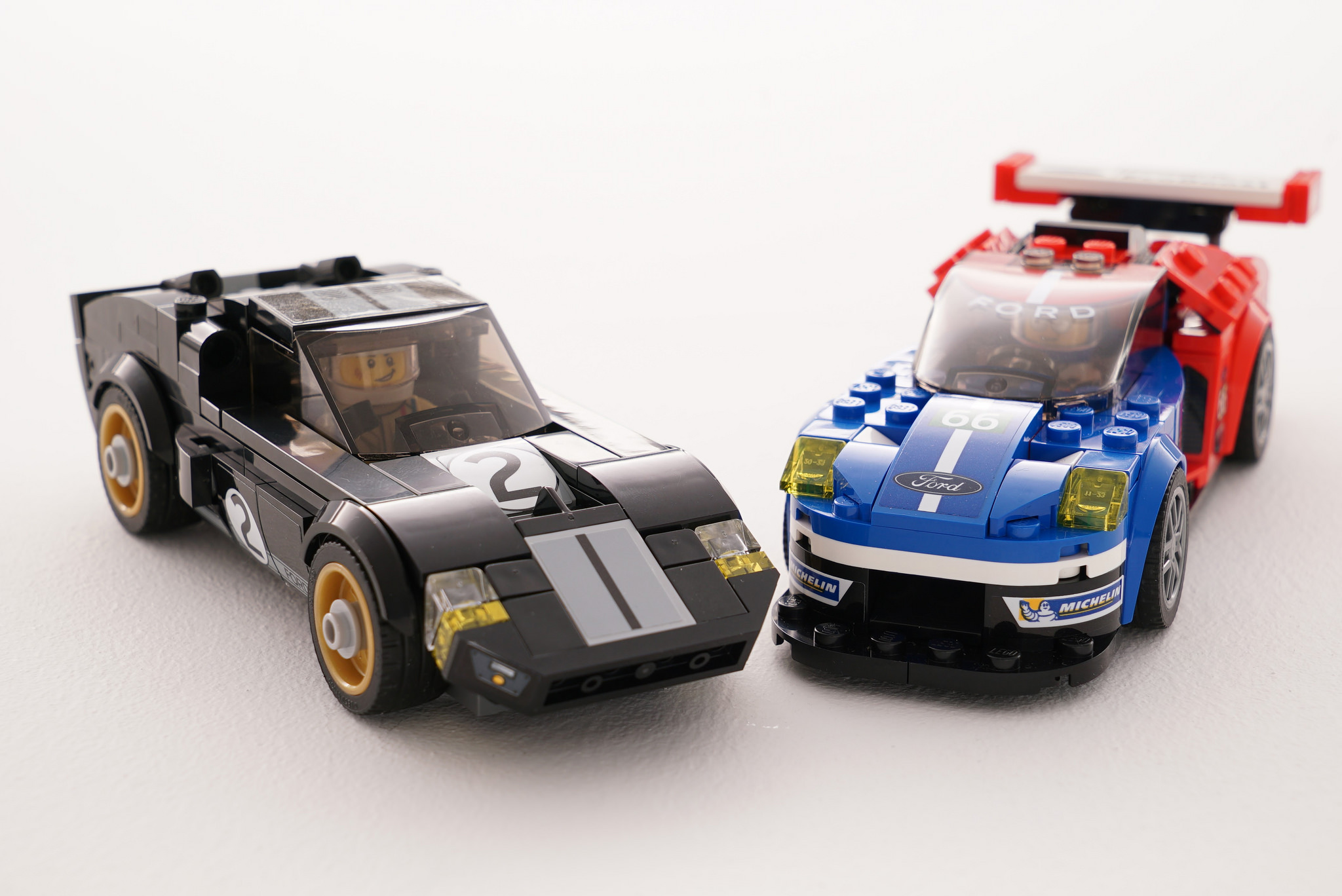