Delayice has built a LEGO version of Kee Lung (DDG- 1801), a military destroyer ship in current service with the Republic of China Navy. Kee Lung was formerly the American Kidd-class destroyer USS Scott (DDG-995) which was decommissioned by the United States Navy in 1998 and sold to the Republic of China Navy in 2001. Delayice has managed to capture the sleek hull shape of Kee Ling despite not using any curved parts and has added extra details with the decorated tiles on deck. The communications and weapons array is particularly well built when compared with the actual ship, while the red and black hull provides some colour. 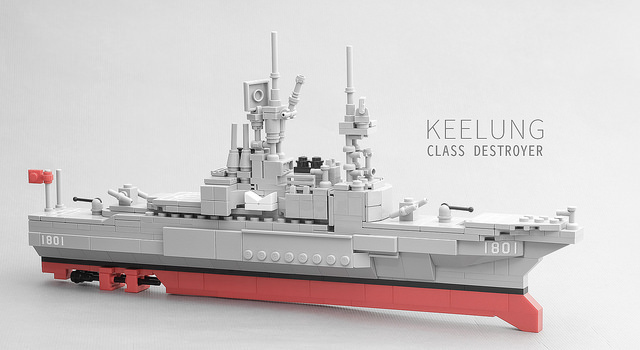 I particularly like the nice colour touches such as the little white cheese slope life-raft and the red modified plate at the rear of the ship representing the flag of the Republic of China.