A sense of abandonment emanates from David Hensel‘s latest build. Here we have Металлоискатель Submarine, a failed prototype Russian submarine which was built to detect metal on the ocean floor. Its aim was to find wrecked ships and sunken treasure, but David explains that the submarine would just detect itself and show constant maximum readings. The build is great, with some lovely curves and angles. I really like the colour blocking and the military theme to the colour palate used. 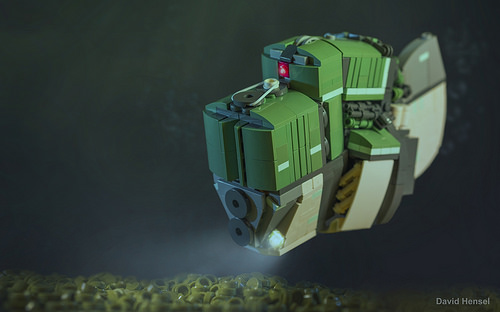 The photography and post production work makes this great build truly fantastic. The narrow depth of field replicates a view in deep water while the atmospheric lights give a sense of realism. As a side note, I really love the rubber band on the nose although I have no idea what it represents!

*A quote of Cdr John Fisher on board the USS Ray. Upon seeing a transient on the sonar repeater he confronted the Sonar Supervisor who claimed it was biological, this was his response.