Well, raise your hand if you miss good old Rock Raiders sets. They were huge, brutal and were all about fighting rock monsters and crashing rocks — and that was cool. Technically, crashing rocks with huge machines is still pretty cool, but something went wrong when the Power Miners sets hit store shelves in 2009. Of course, they looked fresh and bright, but something has irrevocably changed at that moment. The new Volcano Explorers City sub-theme is a new brave attempt to revive the all-time classic. 60122 Volcano Crawler is the most well-balanced set of this year, containing 324 pieces, 3 minifigs and retailing at the price of $39.99 / 29.99€ (currently on sale for 20% off on Amazon), and includes almost everything the new sub-theme has to offer. 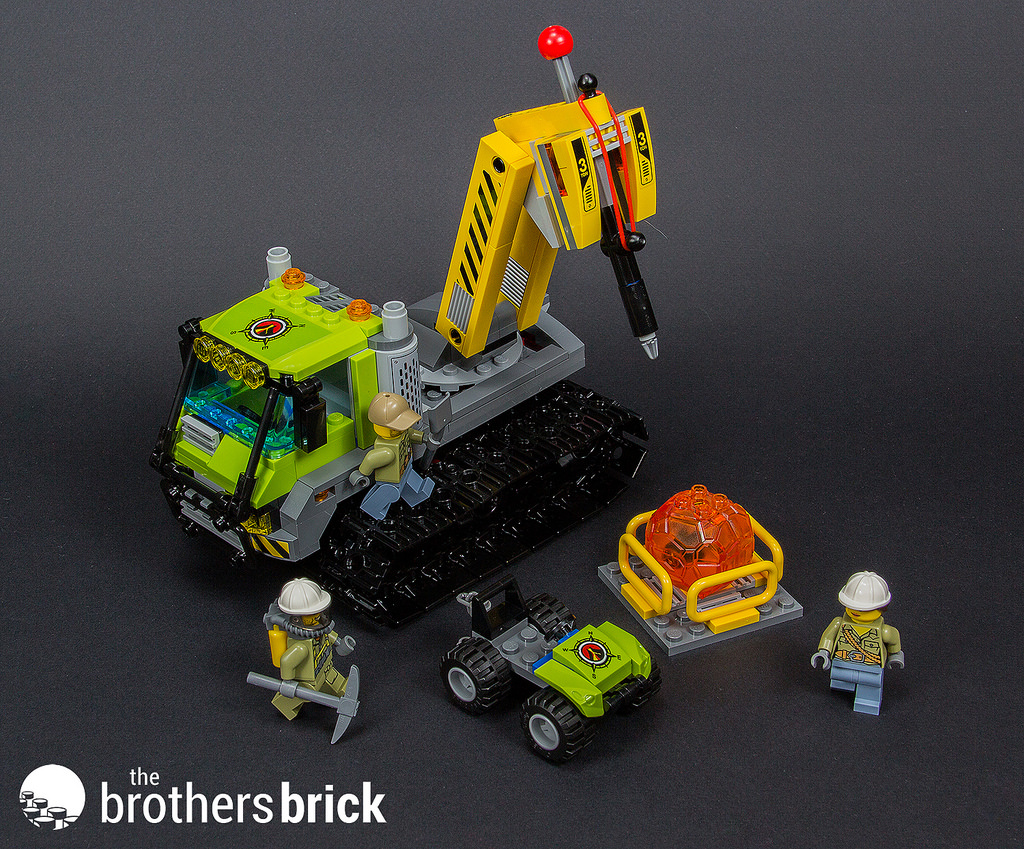 The concept of the set is ordinary: one main huge vehicle, another tiny means of transportation and some themed accessories — e.g. a lava rock. Probably, my favorite part of the set is the minifigures. I don’t buy City sets too often, but this time I was delighted by the minifigs’ designs. Despite the color of the uniform, which is olive green, they look truly great. 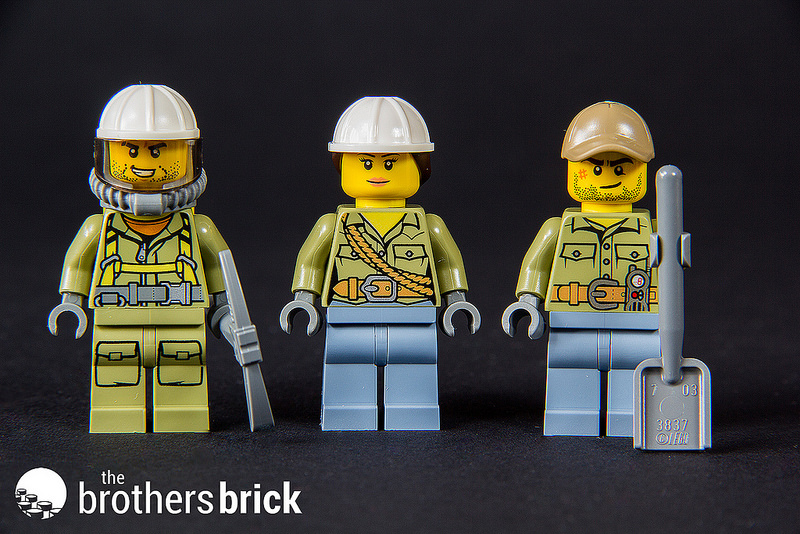 I don’t remember the last time I spent so long examining and admiring minifigures while building an ordinary City set. With this set you get not just three minifigures, but three different torsos, different heads and headgear. The amount of details the prints contain is extremely pleasing; LEGO’s graphic designers should be proud of their work. Sand blue legs complement the olive green torsos, as well as the headgear, particularly well. And I totally love the new construction helmet with a dark brown ponytail! We already got this piece with a red hardhat, but it looks even cooler in white. I’m in love with the design of the female minifigure. Its special torso with rope over the shoulder and the aforementioned helmet make it a hidden gem of the set. 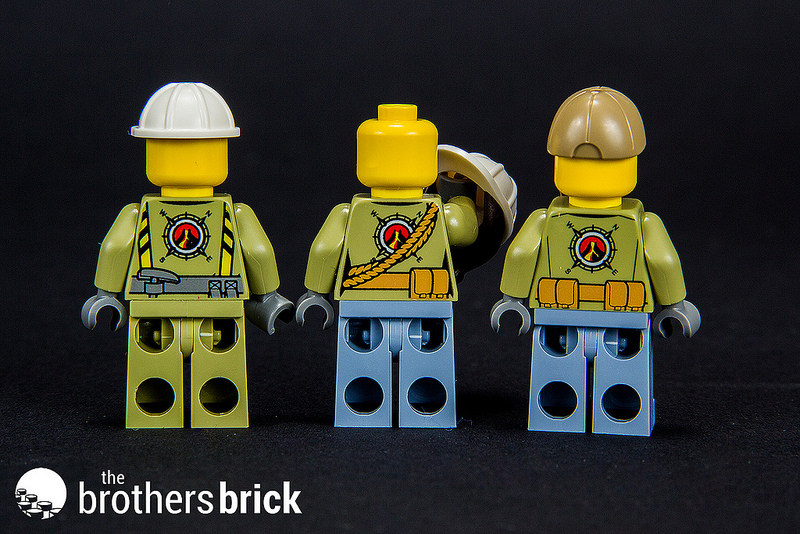 The Volcano Explorers subtheme brings us some new pieces, but this very set only includes a few. The front of the crawler is decorated with the new 1 x 6 x 3 bar with 4 studs, which is great building fuel for starships and space bases. Thanks to 4 studs placed on both sides of the bar I can see dozens of ways this part can be used. And an extra minifig harpoon in flat silver will never hurt. 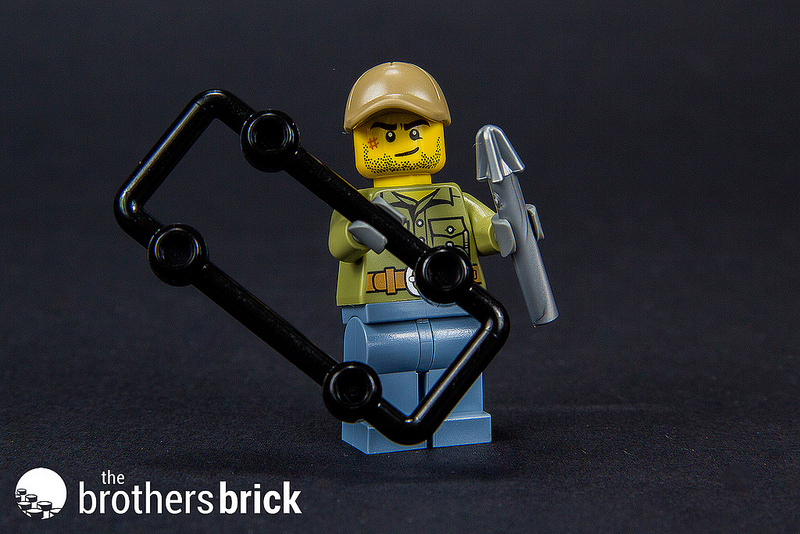 Anything else great about the set? Oh, right, stickers! And the ARE great in the set. They are simple, sharp and make the pieces better indeed… except for the green one, which is attached to the lime 6×4 wedge. The problem is that the colors of the piece and the sticker hardly match each other. The difference is very noticeable, so I’d better hide this part away. 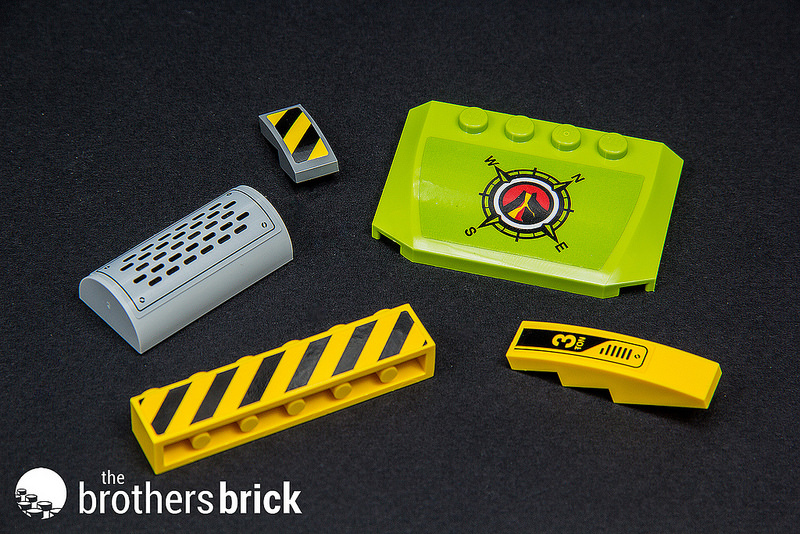 As I already mentioned, this female minifigure is my favourite among City sets of this year. And it looks gorgeous at work as well, either examining rare crystals… 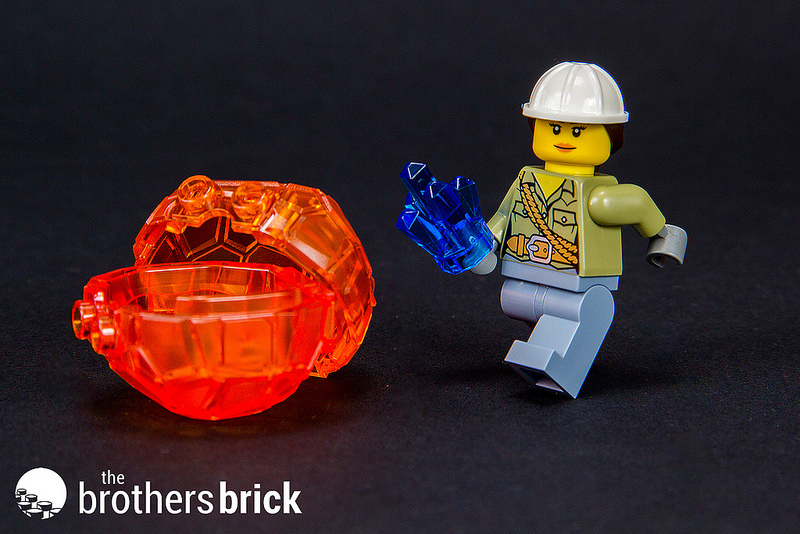 …or driving a tiny adorable jeep around the explorers’ base. 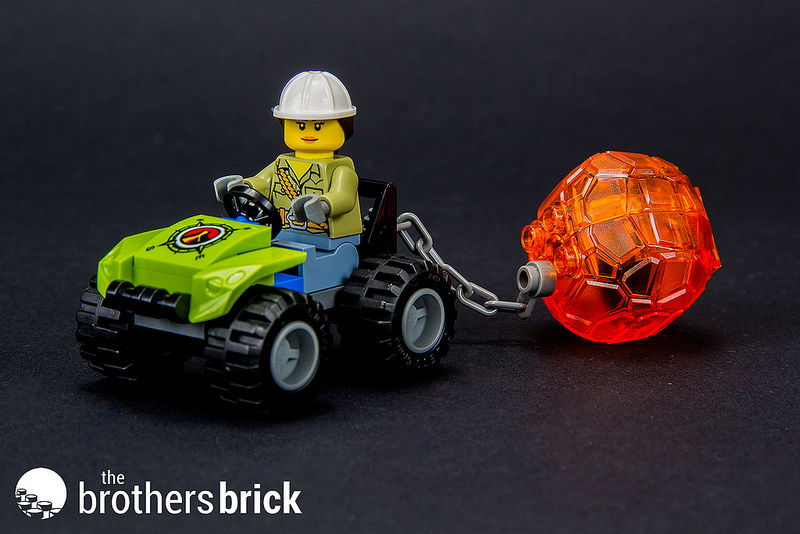 By the way, the jeep and the rock holder by themselves look like a they could be a smaller set. They look great side by side and even without the main vehicle of the set they offer some impressive playability. 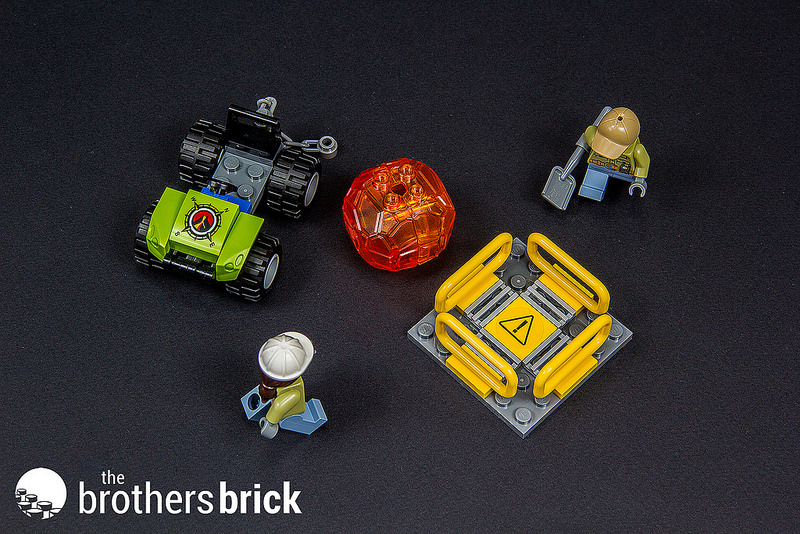 So, you have some ways how to dissect the poor lava rock. You can either go with an old good pickaxe… 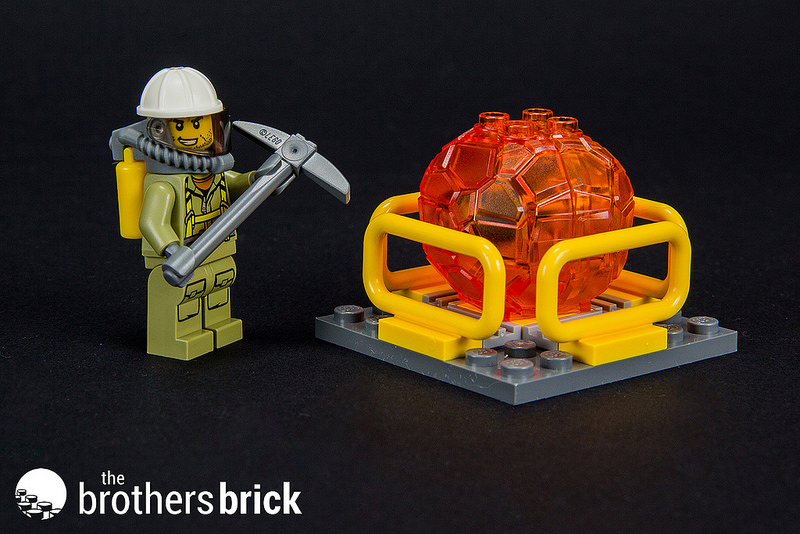 …or use something more powerful! 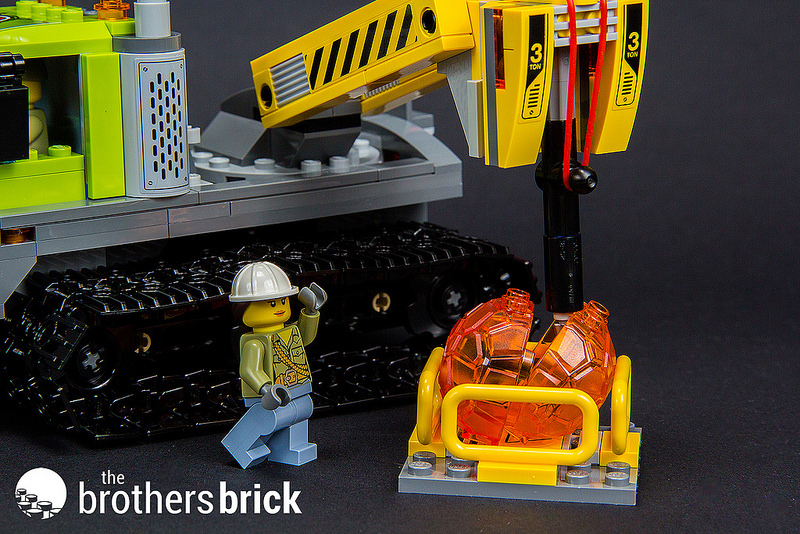 The red rubber band does exactly what you’re thinking it does: jackhammers! It’s a nice simple solution, and you can really crack a couple of rocks using it! 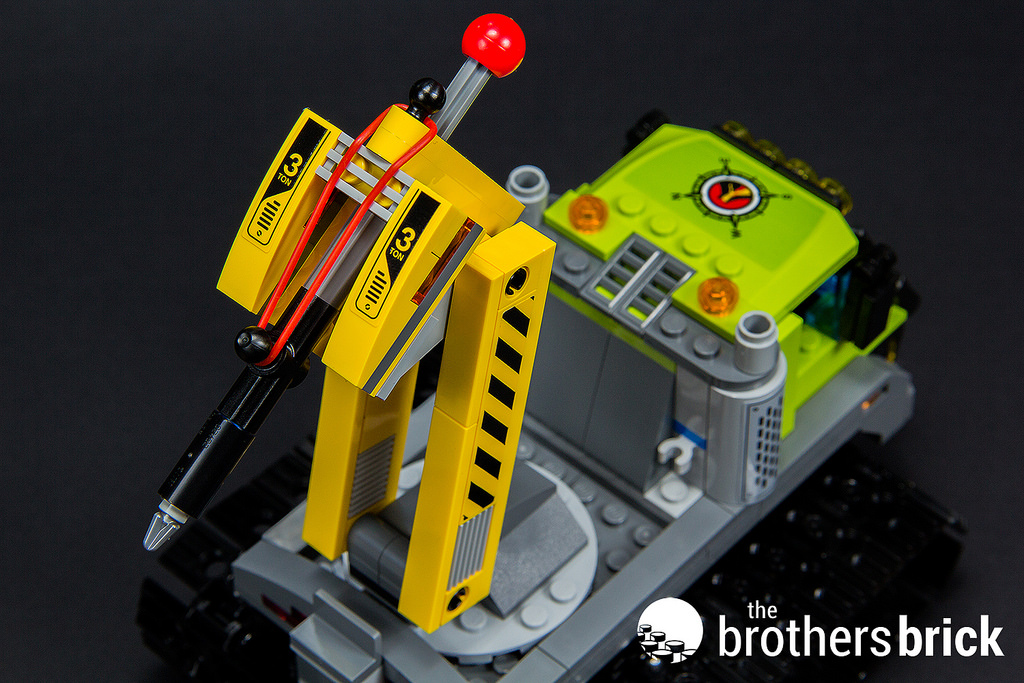 The crawler is an excellent example of a vehicle that can be easily equipped with any kind of drill bit/gun/radar/fishing rod/etc. Its (kind of) modular structure is not only solid and robust, but also made me want to try to attach anything I could fit on it. And not to mention those extremely smooth and good-looking tiled edges of the crawler. Awesome! 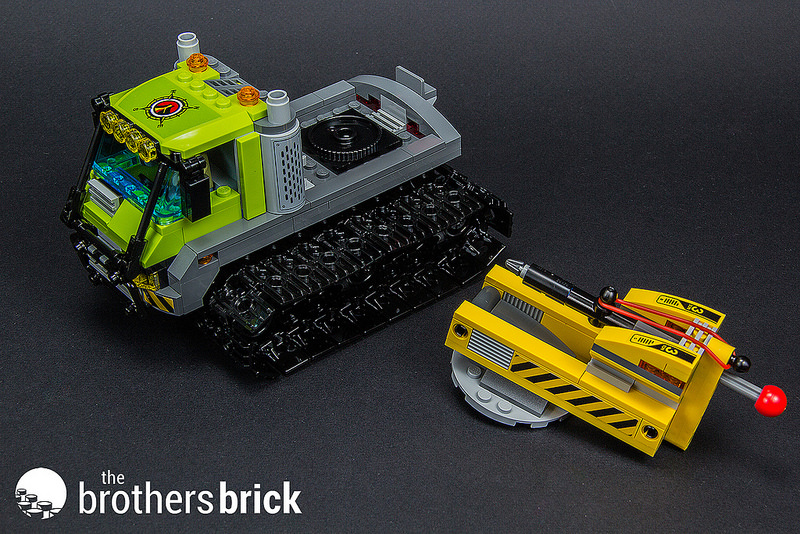 But it wouldn’t be so much fun if one wouldn’t be able to roll the crawler all over the house. The secret of its easy-rolling nature hides inside; it’s a regular middle-sized Technic wheel, which both provides smooth rolling on every surface possible and makes tread link move steadily. The same technique was used at least once in the crawler from 60036 set. 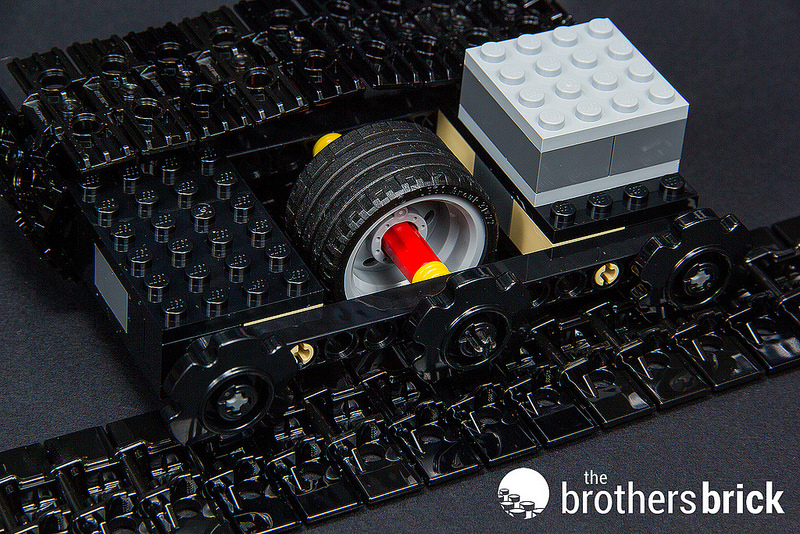 If you think the crawler is a bit huge, you’re right — it is large and bulky, and it is very wide, but that’s what makes it look cool. 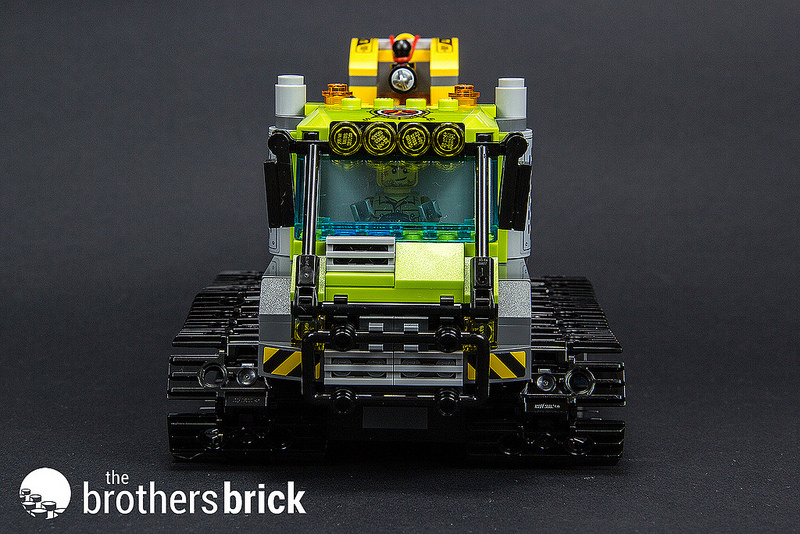 You won’t find many details it its exterior, but those that are there work amazingly well. All in all, the crawler is exactly the vehicle that you won’t want to disassemble for a long time. 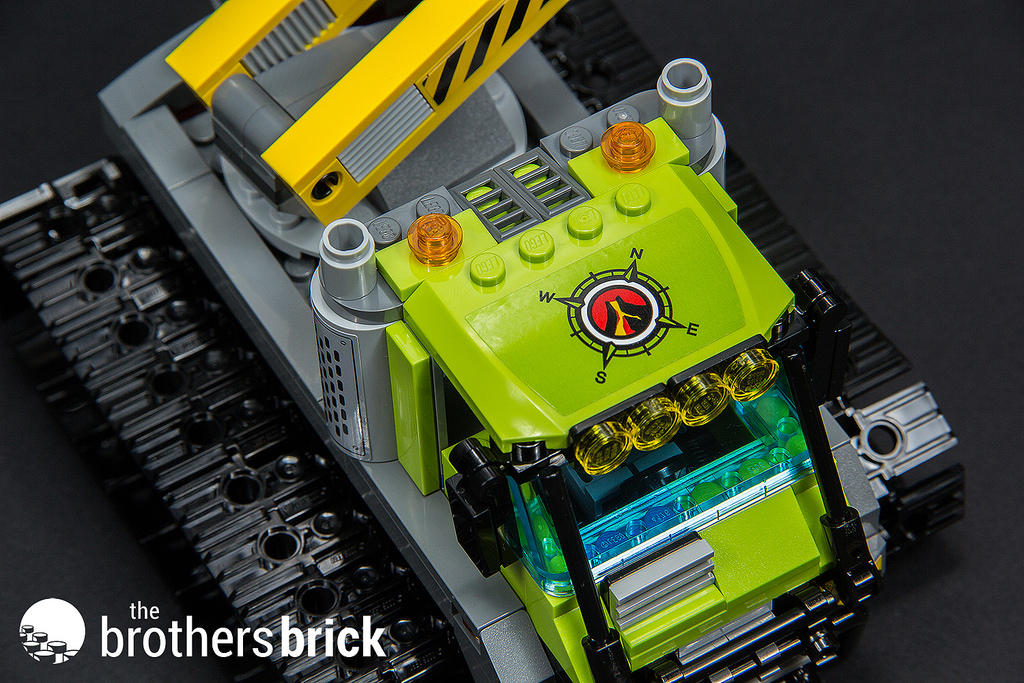 In case you missed the Volcano Explorers sets or are still in doubt which one you should get, rest assured — this crawler offers you the best of this line. Smooth, massive and stylish (in its own sort of way), the set including some top-class minifigures, and even that little jeep! To be honest, I wasn’t expecting to be so delighted, but there are a bunch of reasons for this. And I believe your impressions will be no less upbeat than mine.