Worms was an artillery strategy video game released in 1995, back when worms were fashionable. The sometimes-controversial builder Suck My Brick has nicely captured these well-armed and battle-ready guys in LEGO form. There is definitely a humorous side to arming worms with grenades, flame-throwers and machine guns, and the comedy has been transferred to these brick versions. From hot dog bun eyebrows, through a cigarette-chomping worm, through to a Rambo-worm with bad teeth, what’s not to love about these little dudes? 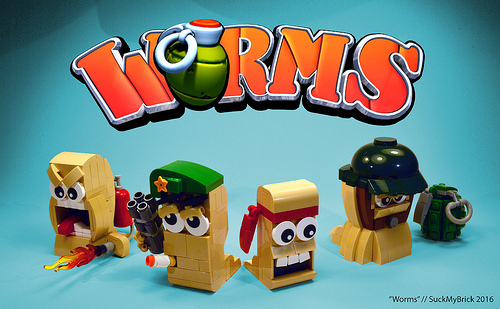 My favourite is the grumpy warworn worm on the right with his grenade and WWII-style helmet. There’s some ingenious parts usage to create his grenade pin. Shame he has no hands to pull the pin and throw it!