Now that the buzz from The Force Awakens has assuaged, and the hype for Rogue One hasn’t yet reached a fever pitch, the LEGO Star Wars line can turn its Goliath head toward older or smaller pieces of the franchise. Thus it is that this summer’s Star Wars wave contains elements from myriad sources, including the original trilogy, the prequels, Rebels, the Freemaker Adventures and, yes, even a little of The Force Awakens has snuck in. We’ll be looking at a few of these sets here on The Brothers Brick, starting today with 75150 Vader’s TIE Advanced vs. A-Wing Starfighter. This set is from the Star Wars Rebels line, and retails for $89.99 USD and contains 702 pieces. 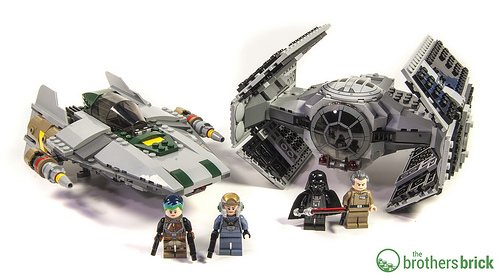 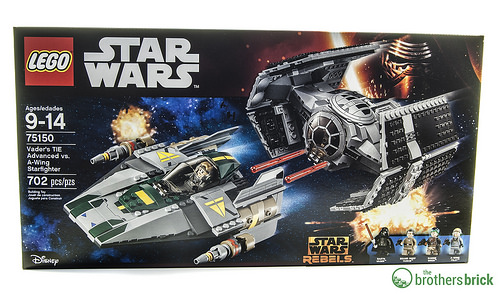 The set comes in a large box befitting its price, if perhaps not its part count. The set’s 702 pieces are divided among seven numbered bags, with the instructions and sticker sheet packaged into a separate bag with a stiff flat of cardboard, which is always nice and ensures an undamaged sticker sheet. There’s an instruction manual for each starfighter. 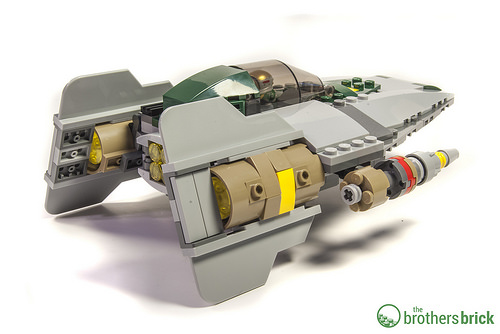 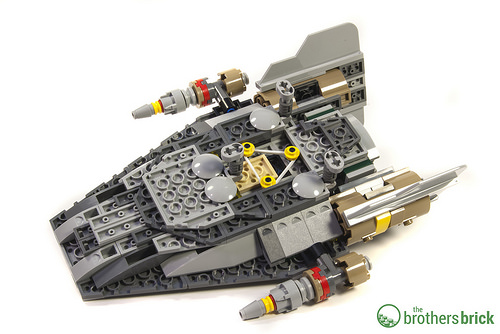 The A-Wing is up first, and it’s an interesting build. The primary play feature of the A-Wing (besides its incredible swooshability) is the the addition of two centrally mounted spring-loaded dart launchers, of the variety that have been showing up in droves since we finally managed to be rid of those flick-fire missiles. The actuator for the spring launchers is quite cool, though. The entire central section of the ship—a four stud width—can be slid back by one stud, triggering the darts to fire, and then snapping back into place with the help of rubber bands. The mechanism works very smoothly, and it means that the A-Wing is essentially a large slide release disguised as a spaceship. Impressively, the A-Wing’s design does not suffer from this limitation. By my count, this is LEGO’s fifth discrete minifig-scale version of the A-Wing, and it’s by far the most accurate. The shaping is fantastic, helped in large part by the new fin pieces used for both upper and lower stabilizers, as well as the broader palette of curved slopes now available. Even cooler, this A-Wing now has retractable landing gear. The engines have some clever construction techniques, and the set includes four of the new 4 x 1 inverted curved slope in light grey, which has previously only been available in the 2016 version of the Burj

Khalifa (and even there you only get 2). My one quibble with the model is that the slanted fin and engine modules don’t lock into position. When rotated all the way down they are in the proper orientation, but they’re attached with clip hinges so they rotate at a touch. Not deal breaking, but I wish they’d stay put better. 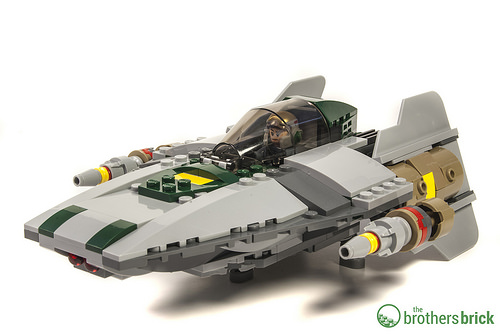 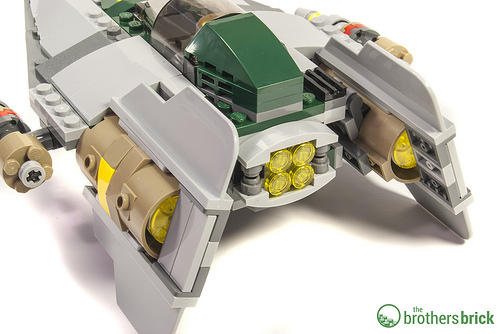 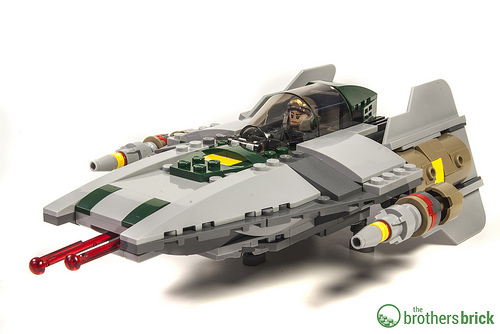 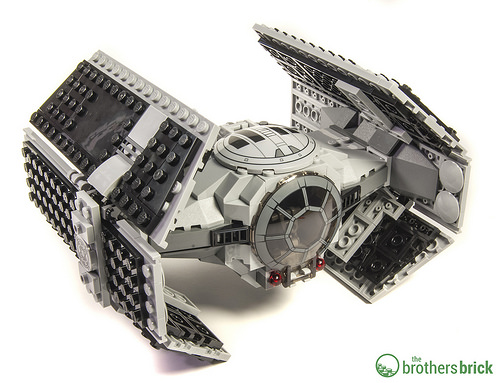 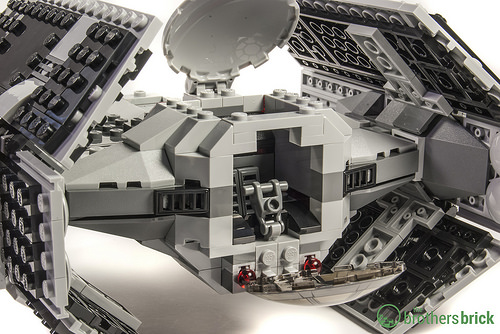 for the distinctive oculus windscreen. As we’ve come to expect from LEGO sets lately, the body is made of clever techniques and good part usages. There are two more of the spring-loaded dart launchers embedded in the body beneath the cockpit, and the trans-red darts make considerably more sense here than in the A-Wing. As in previous versions, the flat body portion behind the cockpit is held on with only a few Technic pins and easily detaches, though I don’t think that’s a play feature because removing it causes the levers which actuate the darts to fall out. The body and pylons are incredibly strong, however, and you needn’t worry about the wings coming loose as you zoom it around chasing the A-Wing. And speaking of the wings, they’re much more detailed this time around. Now they’re three plates thick, so they have a proper light grey edge all the way aound, and the wing angles use both click and clip hinges for a very strong connection. This is a solid, good-looking model. 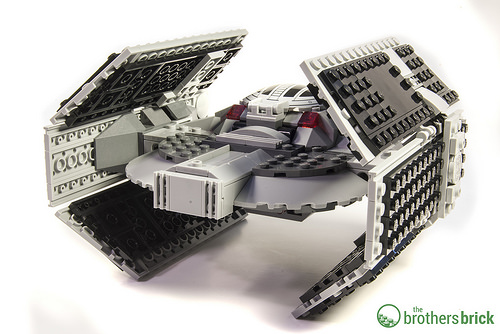 There are four minifigs in this set, despite the set only having two single-seat cockpits. You get a generic female A-Wing Pilot and Sabine Wren fighting for the Rebels, and two disproportionately powerful characters for the Empire: Darth Vader and Grand Moff Tarkin. All of the figs are very nicely detailed, with double-sided faces (except Vader), though there’s nothing for Sabine and Tarkin to do except watch the two pilots battle overhead. In the meantime, they are each provided with blasters to take potshots at each other. The A-Wing Pilot wears the same helmet as the 2013 A-Wing pilot, though the printing is different here. The sand blue torso is unique. Sabine appeared in a pair of Rebels sets last year, but the version here is unique in all but the head. Despite his legendary status in the Star Wars universe, this is only the third LEGO set to contain Grand Moff Tarkin, and both previous sets had the same identical, grey-uniformed version. This set has Tarkin in a dark tan uniform and a more accurate hairpiece that first appeared on The Doctor. This is the first time it’s come in dark grey. Vader is nearly identical to the version that appeared in 2015’s Death Star Final Duel, though his torso print is subtly distinct, and he wears the newer two-part helmet, which is undeniably cool.

Ultimately, from a construction and accuracy standpoint, this is a stellar set. Both ships are best-yet versions, and feel very accurate and nicely built. The figures are all excellent and relatively unique. But since the set retails for $90, is each of these ships a $45 starfighter? That’s a tough question. As LEGO produces more and more Star Wars sets, and re-releases the same vehicles and ships every few years, we fans would quickly cry foul if each new version was identical to the last. And indeed, LEGO is at times guilty of doing just that or making only inconsequential changes. However, more often than not LEGO strives to make each new version more accurate, more complex and more fun than previous versions. And since the ship scale is fixed (being based on the minifigures) that means more detail and more pieces are being packed into the same space with each iteration. So the first version of the A-Wing, released in 2000, may have only cost $15, but it also only had 125 pieces. 16 years later and that same ship, at the same scale, uses around 350 pieces. As fan with a limited wallet, it’s just harder to swallow the high price when it comes packaged into a small ship. And yes, there is a “Star Wars” tax, too. In another theme, this set would likely cost $70 or $80 instead of the $90 that it does, so if the price bothers you, it should be easy enough to find a sale in a few months that will knock twenty percent off. But whether you spring for it now or wait a bit, rest assured that this is a great pair of Star Wars ships that will not disappoint.