This spring the sky is the battlefield between good and evil. Skybound, the theme of the new Ninjago sets, brings the action high above the ground. Our team has already reviewed Zeppelin Raid, Misfortune’s Keep and Tiger Widow Island, which introduced our readers to all the evil characters. Now it’s time to take a look at what good ninjas have to respond with. 70602 Jay’s Elemental Dragon is a medium-sized set of 350 pieces, which includes 2 minifigures and a monkey, and its retail price of $29.99 seems appropriate. 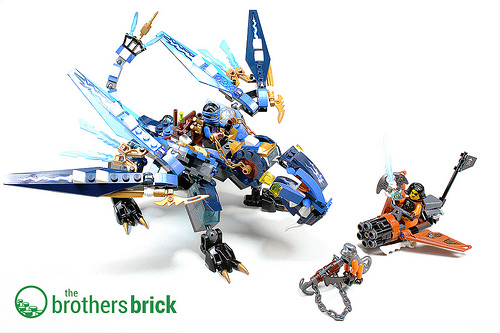 Pieces are distributed between 3 bags: the first one contains parts for the flyer and the body of the dragon, the second bag allows building of the dragon’s head, while the third one contains the largest parts which form a pair of wings and a tail. Surprisingly enough, the instructions are provided in two rather thin booklets, though one medium-sized book would be more convenient to use and to store. Last but not least is a sticker sheet with 14 stickers on it. 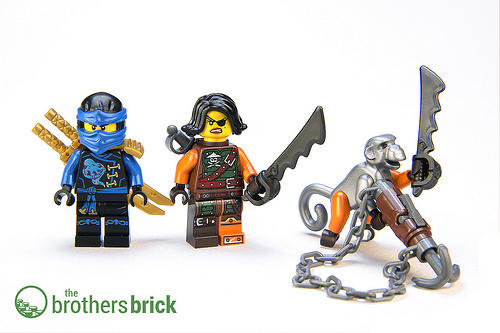 Minifigs are one the pros of the set. Jay’s minifigure is not unique and can be found in other sets of the Skybound subtheme, but unlike the one in 70605 Misfortune’s Keep, this version has suffered no eye injuries. Cyren, a female member of the Sky Pirate crew, is the real gem of the set. Even though the legs are the only new piece, all the parts match each other perfectly, so that the complete minifig looks quite fetching. With a huge jagged cutlass in her hand she is simply charming. And of course a huge bonus is a silver monkey, which looks utterly bizarre. Cyren is the only character with a second face. As usual the torsos have prints on the both sides. 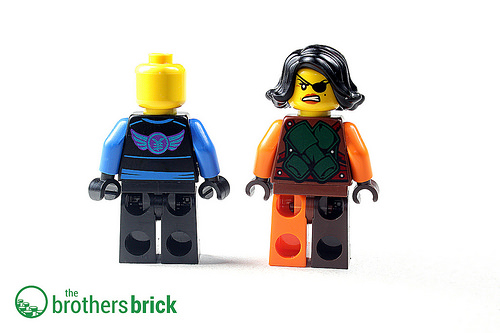 The set is not that rich in new pieces, still it is a fine source of blue parts, especially transparent blue and dark blue ones. For instance, a modified 2×2 plate with curved minifig head holder appears here in dark blue for the first time, and looks really impressive. What also impressed me is the variety of weaponry included in the set. I’m not that familiar with NinjaGo sets, but I guess each ninja uses a couple of katanas — at least that is what I was expecting to get. To my surprise now I have at least 17 different weapons among which are swords, daggers, sabers and sais. Not only is it a great supply for almost any creation, but also makes the set of only two minifigures extremely playable; it took me almost half and hour just to equip each character with all possible combinations of weapons. 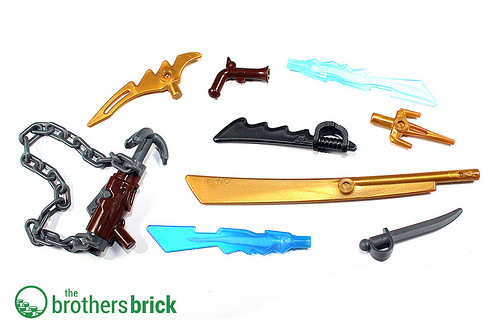 Let’s start with the smaller build — the pirate flyer. It is one the smallest of the pirates’ aircrafts and consists of no more than 30 pieces — just the right amount for a tiny yet playable addition to the set. A rapid shooter in the front part makes it look heavy while two wings decorated with stickers create a nice-looking shape. A spanner wrench adds a bit of playability. 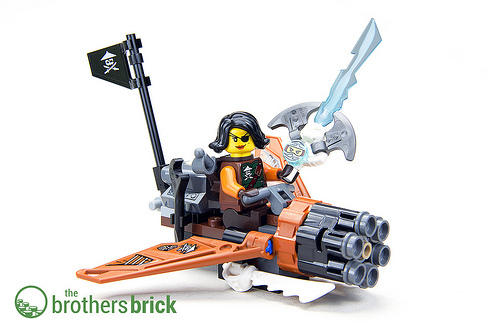 Even though the overall look of the flyer is satisfying, the bottom of the build reveals its utterly simple structure. On the bright side there are lots of ways to improve it. 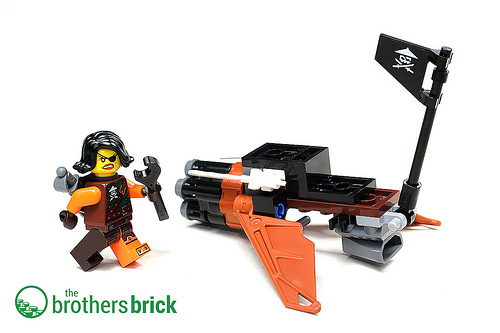 However, the set is devoted to the Jay’s dragon, and here it comes — the ferocious and menacing elemental lightning dragon. Yes, all the trans-blue parts are meant to be electric discharges, and from some angles they do look cool. The weakest parts of the dragon (in terms of design) are the body and the legs. The body, being too narrow, remains extremely simple. On the one hand, it makes the building straightforward (as it should be for children), but on the other hand the absence of more interesting building solutions makes me sad. 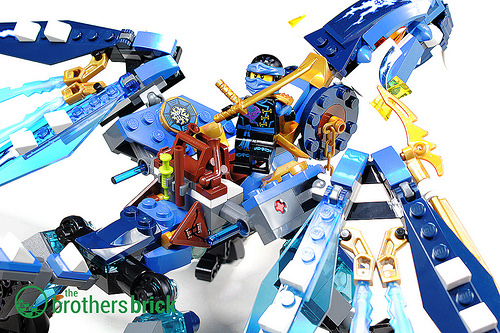 Unlike other parts, the dragon’s head looks pretty solid and remarkable. The jaw, which is made with the aforementioned modified 2×2 plate, is simply the best part usage I’ve seen in any official set of this price range for a long time. You know when you find a really awesome usage for a useless piece and you’re ready to build a whole diorama just for the sake of that piece? That’s the exact impression I got from the main build of this set. 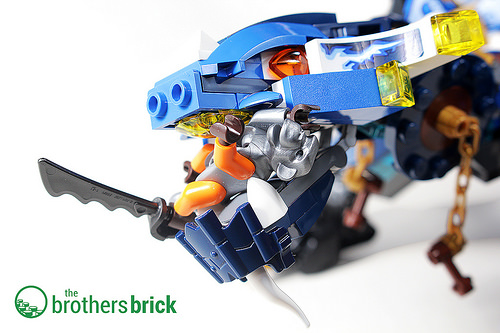 Surprisingly, the saddle on the back of the dragon is pretty neat. Here’s a standard reddish-brown chair decorated with a couple of pirate flintlock pistols, which look rather stylish, completed with a blow pipe and a lime syringe! Fighting a heavily armed battle monkey with a blow pipe might not be the best idea, but as I mentioned earlier, the variety of ninja weapons is unexpectedly pleasing. 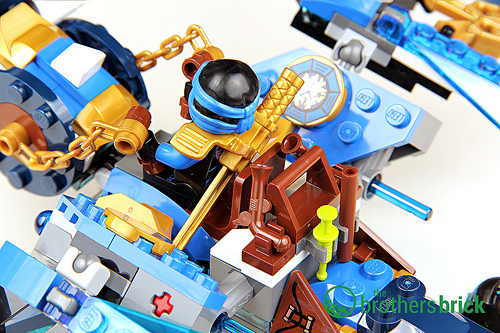 It would be so much cooler to have a large proper dragon in one of the Ninjago sets. Remember the 4894 Mythical creatures set from 2006? That was one awesome dragon – huge, with dozens of hinges and impressive wings made with fabric. It was amazingly playable and much more robust than the Jay’s one. I wish we could get such a beast with a couple of ninjas on his back — that would be a hit!

All in all, Jay’s Elemental Dragon is a well-balanced set. You get great minifigures, a wide variety of weapons and even a monkey. It’s all you need to try the whole product line with just one set. The dragon itself is far from perfect; it’s fragile, has few joints and its body doesn’t look impressive at all. Transparent blue and dark blue parts help to fix the overall impression as many of them will come in handy for your own creations. If you already have or are going to buy any other 2016 NinjaGo sets, 70602 won’t be that interesting to you. But if you’re not familiar to the subtheme yet, this set is probably your best choice.