A group of LEGO fans from Poland decided to build the hugest Fallout diorama ever, and Bartłomiej Huetter has already built the first part of the project. Kombinat features a derelict factory that’s been turned into a refuge for survivors in the wasteland. Despite all the chaos, people seem to find entertainment in this messy living space. A brewery, an arcade saloon, a dance club and a couple doing not so safe for work activities. I guess we can’t expect more fun out of this apocalyptic world!

Usually it’s quite hard to build a large scale diorama but sometimes they are also full of details that it’s harder to absorb everything at once. Luckily, Bartłomiej has created a huge album on Flickr which displays many details including stickers and digital designs of the early model. Make sure you don’t miss anything. The vehicles and minifigures are astonishing! 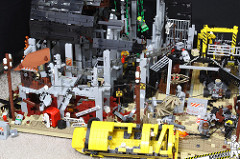 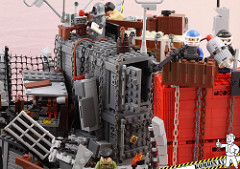