The first wave of Angry Bird sets have already been released here in the UK, and consists of six sets ranging from Set 75821 Piggy Car Escape (Price UK £11.99/US $12.99) to Set 75826 King Pig’s Castle (Price UK £74.99/US $89.99). You can see the full lineup in our initial news coverage of the Angry Birds sets, and we also got a first-hand look at them at Toy Fair New York last month. The Angry Birds sets are due for release in the US in April and are not available online or within the US LEGO Stores at present. The Angry Birds sets are all colourful and enticing for the ‘recommended’ age range,  between 6-12 or 8-14 as the set size increases. For those of us who are perhaps slightly older than this range, fear not…there are a host of new moulds, re-colours and great new printed tiles that will also bring great joy. 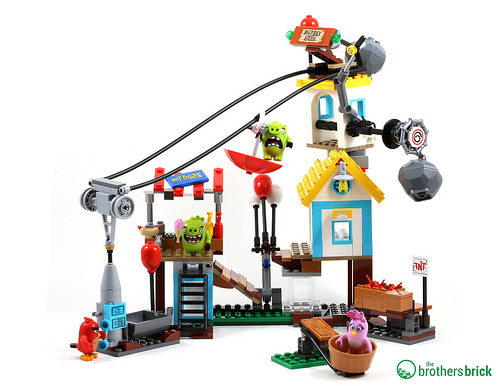 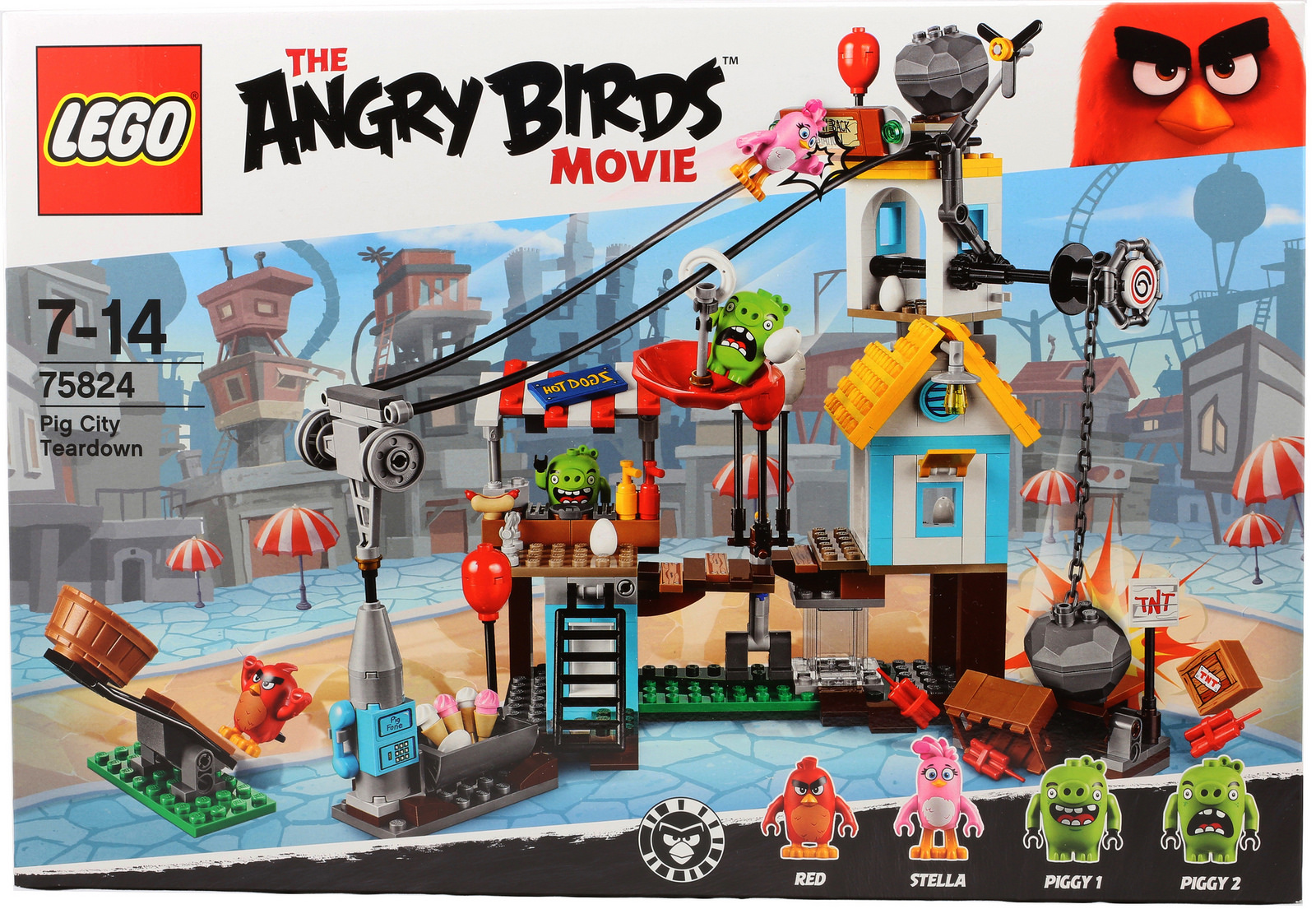 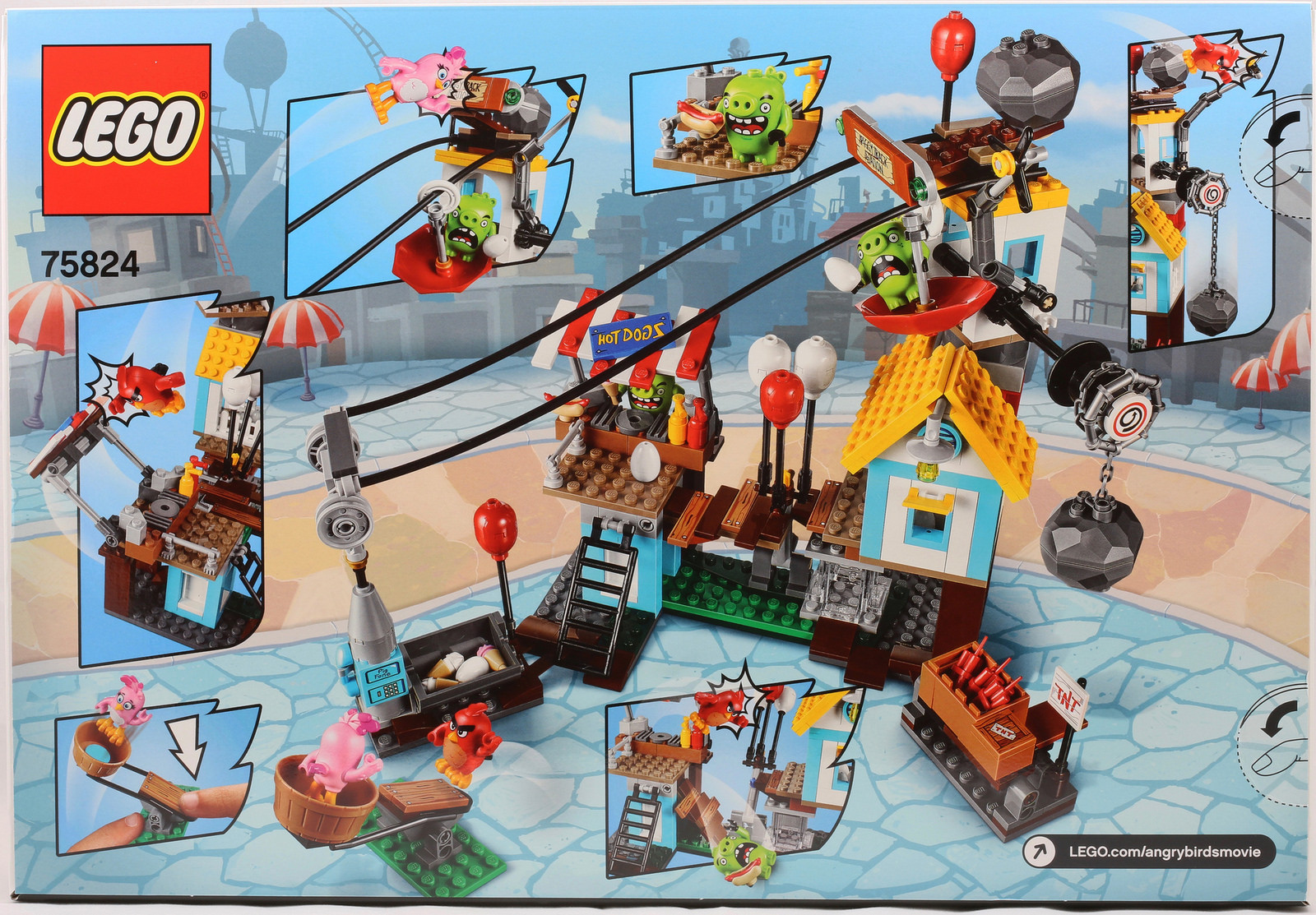 There are three numbered bags in this set that are simply opened and built in numerical order. Two instruction booklets are included and a sticker set that has the ‘cartoon-like’ printed font and style seen throughout the Angry Birds theme. The two instruction booklets could easily have been united as one booklet. I have no idea why the booklets are split as 1 and 2 for this type of set other than a mother saying, “It’s time to go to bed young Andy, you can start booklet 2 tomorrow…” 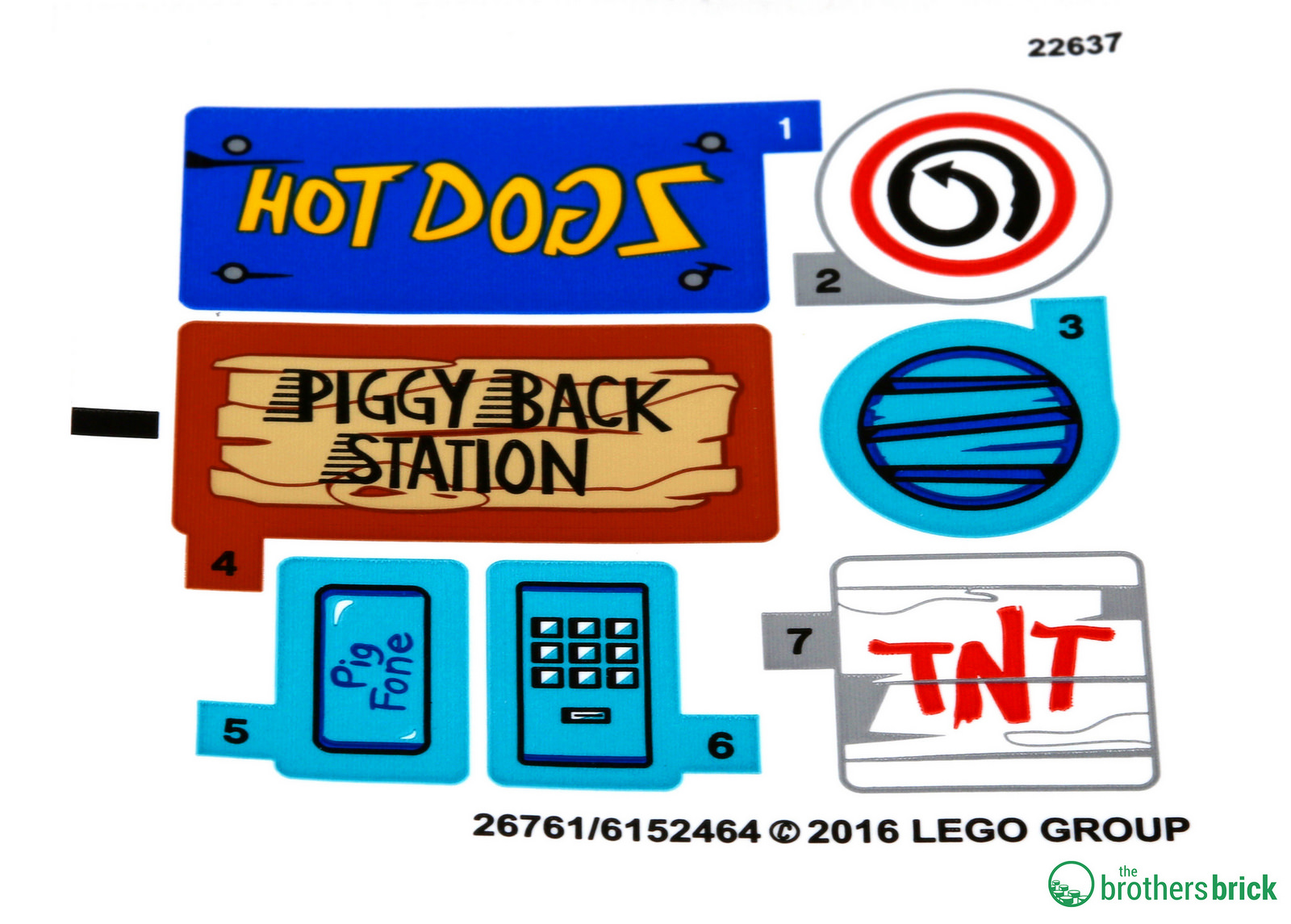 The Angry Birds minifigures were spotted in leaked photographs and then official teaser images for quite a few months before the sets were released. I remember reading quite a few online ‘sighs of dismay’ as they are not build-able figures in the usual sense. This set contains two Piggies — one smiling (I think?!?) and one grimacing, Red and Stella. The only part of the figures that are removable in any sense are the bird’s wings and the Piggy arms/hands. This is actually quite practical in many ways as the birds are launched at the set to try and activate the play features by hitting certain targets, so making them robust and with as few parts as possible is ideal for their ‘cannonball’ status.

Bag one contains the minifigures and the left hand side of the main build. The very first part of the build is the launching catapult to allow the Angry Birds to be catapulted towards the target areas.

The hot dog stand is cute with the all important hot dog roll piece plus ketchup and mustard dispensers to ensure your condiment needs are met. There are two main play features here, the red and white canopy pivots backwards when hit and the collapsing wooden bridge is constructed although the target balloons do not appear until later in the build. The bridge upsets me a little as even when in place the actual bridge planks do not overlap enough to make it safe to cross (must be my Health and Safety awareness kicking in). 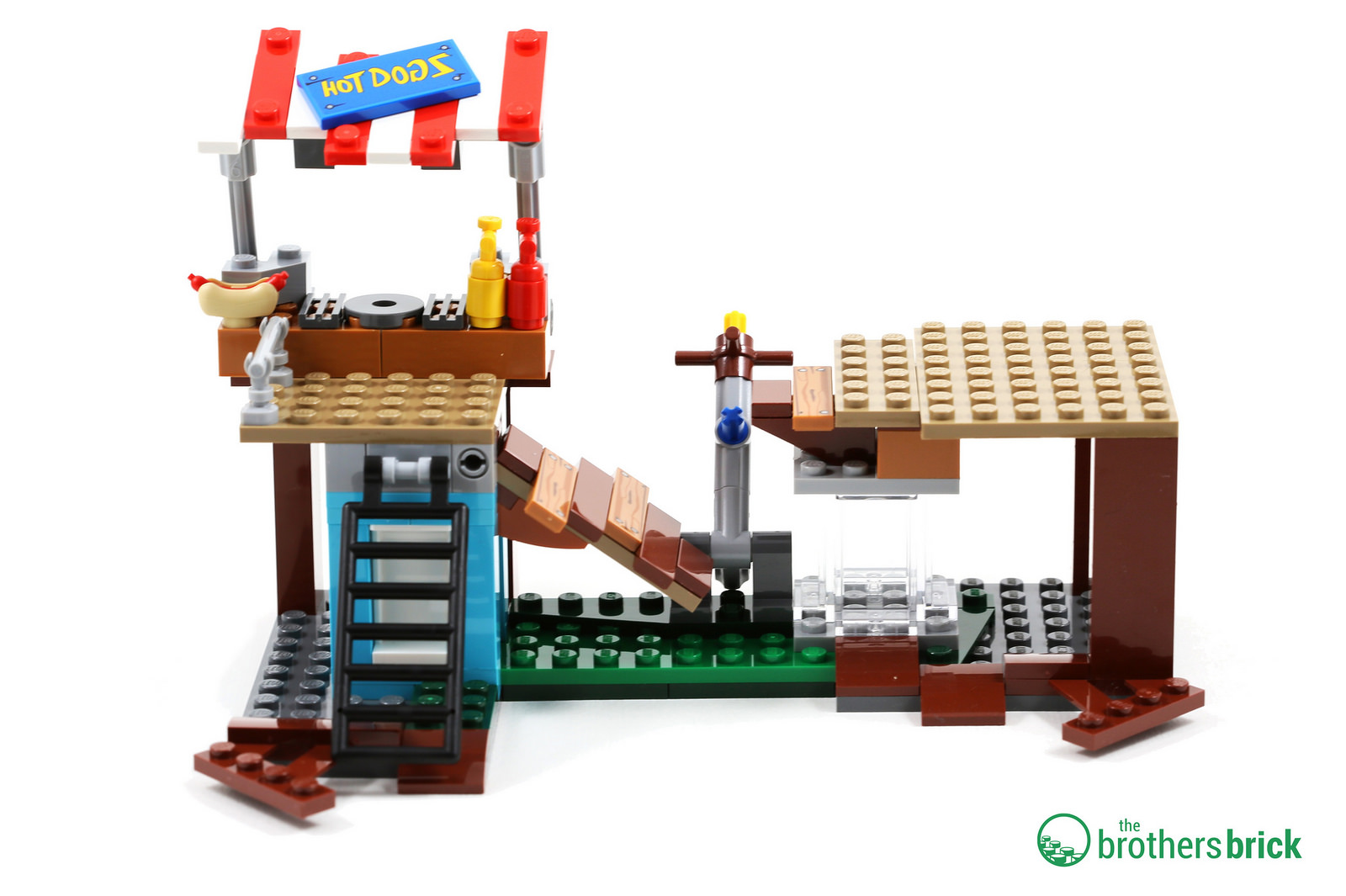 The second bag contains the parts to build the right side of the main build with a small ‘egg hut’ containing 5 eggs.  The roof is nicely constructed with hinges and there are some little details I liked such as the outside light and the window canopy in  matching yellow. The balloons are great; I especially like the new balloon base part which is supplied in red (part 6151968) and  white (part 6143596). It seems quite decadent that this great part has been released as up until now most builders were using a similar 2×2 inverted dome for the base of balloon (part 15395). The three balloons on the end of the bridge are the target area to collapse the bridge. Two other play features are partly constructed, the ‘falling rock’  and the zip line station, comically called the ‘Piggy Back Station‘. 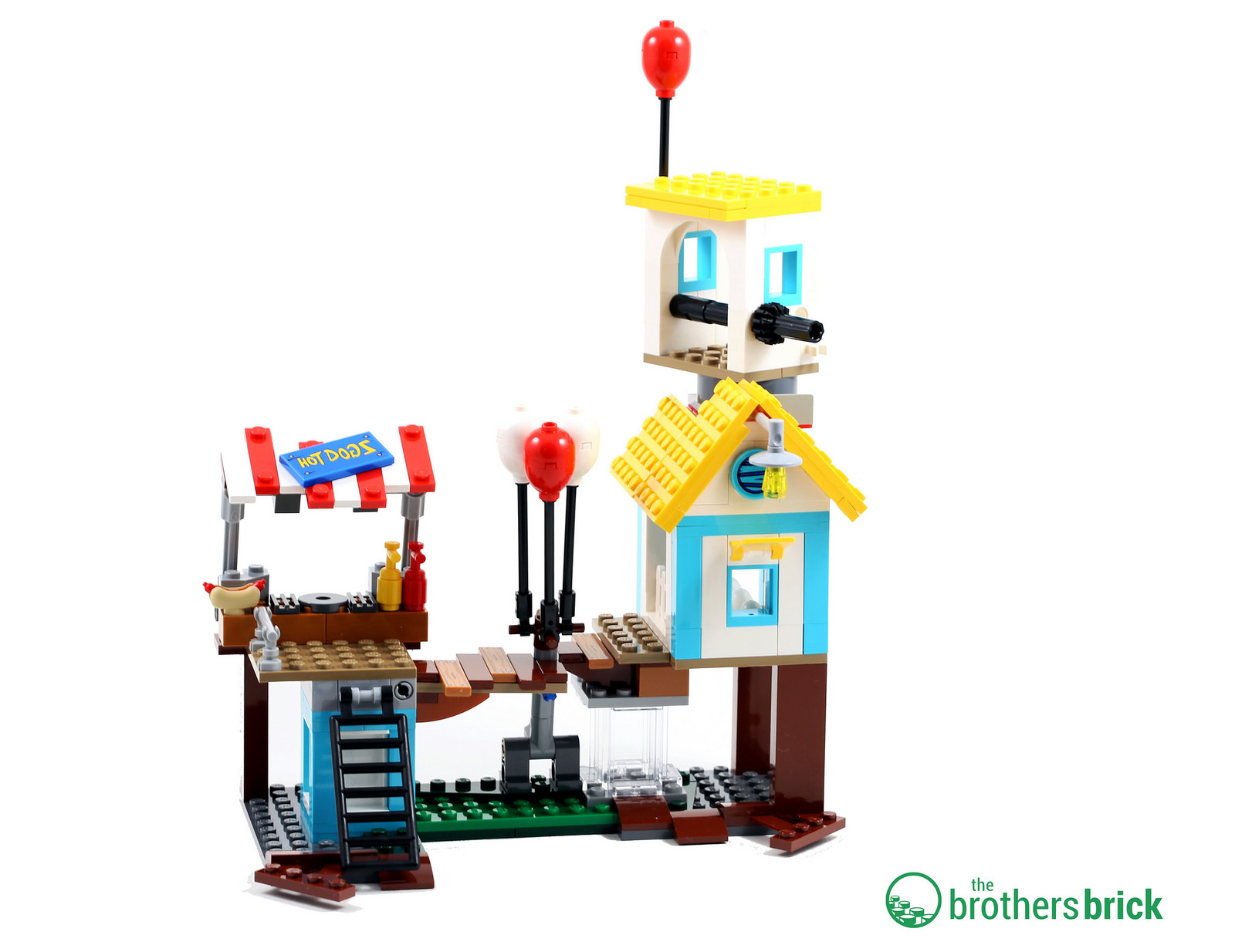 The final stage of the build is the completion of the zip-line, the TNT catapult and the pig trough with ‘Pig Fone‘ — I presume this is for placing emergency orders for ice cream when the trough is empty. The overall build is a bit haphazard looking but colourful and makes more sense when you realize that it is essentially a series of targets for your angry birds to hit. 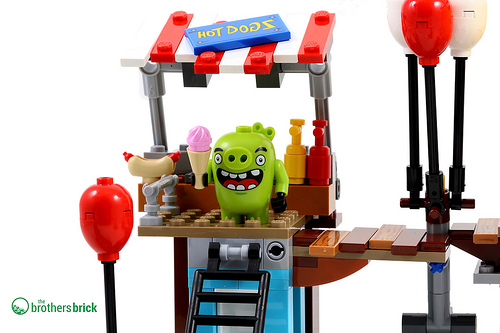 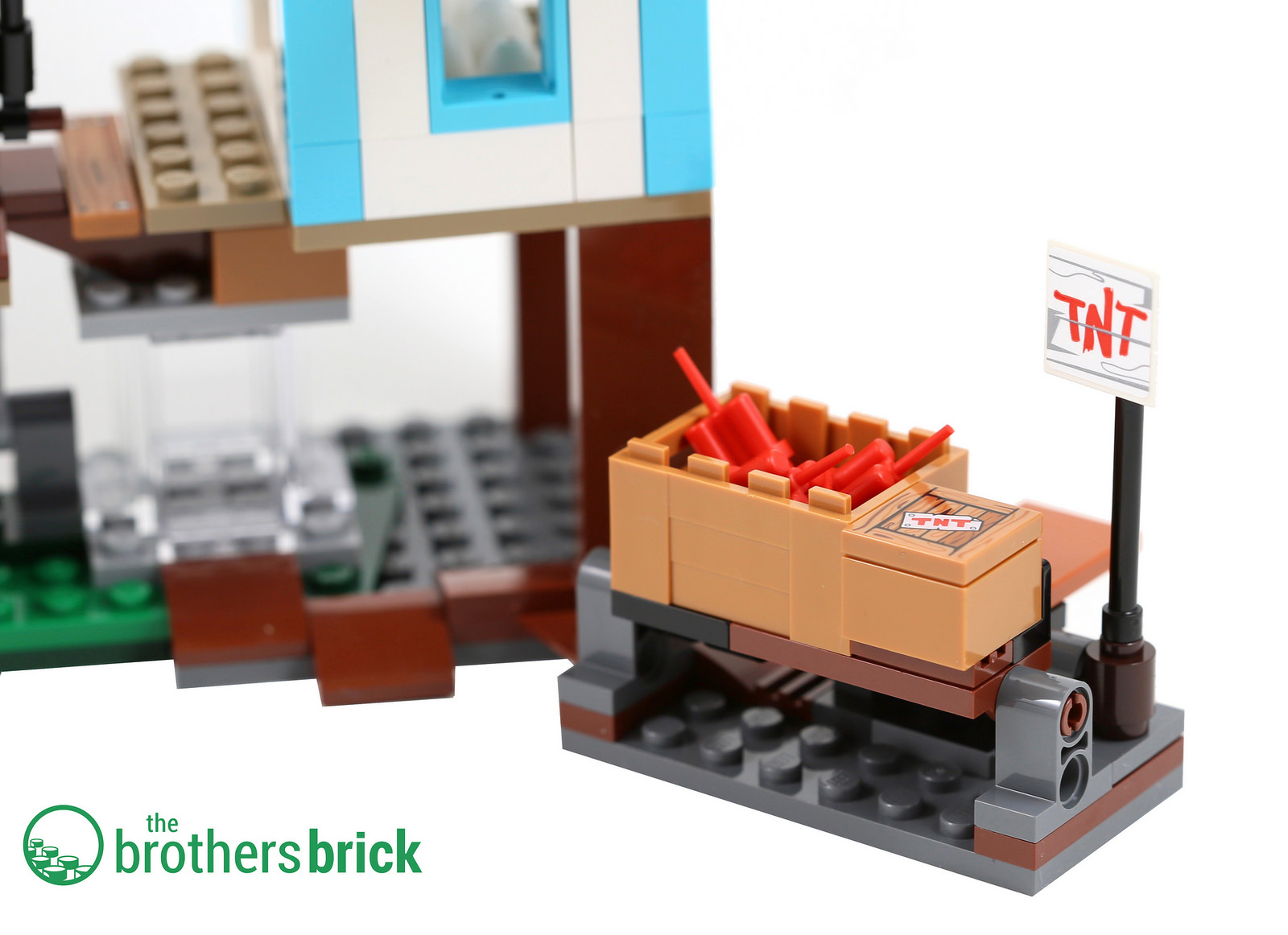 I must admit that the main attraction for me were (in no particular order):

1. The hotdog in a hotdog bun (yes an actual bun for your hot dog!) 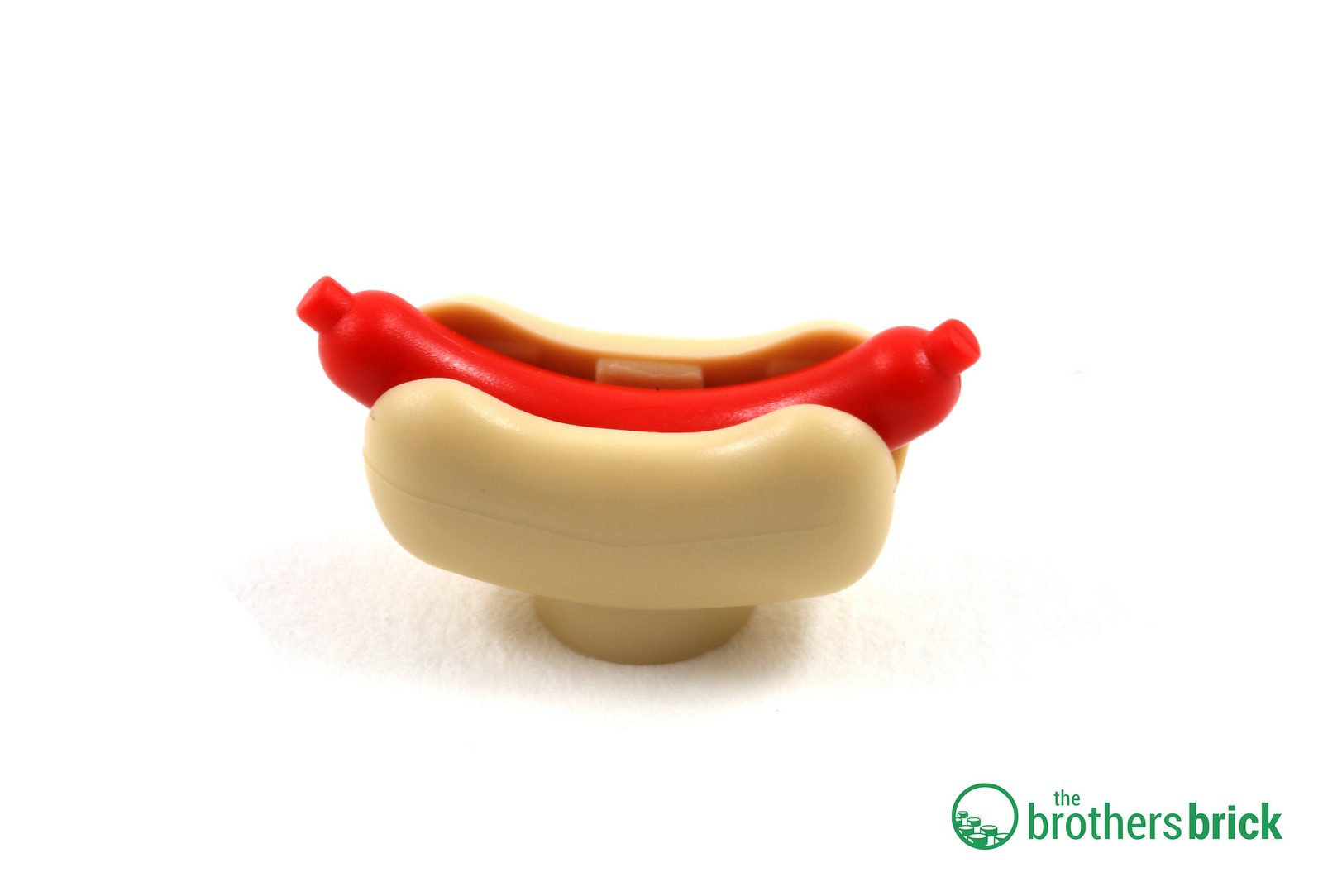 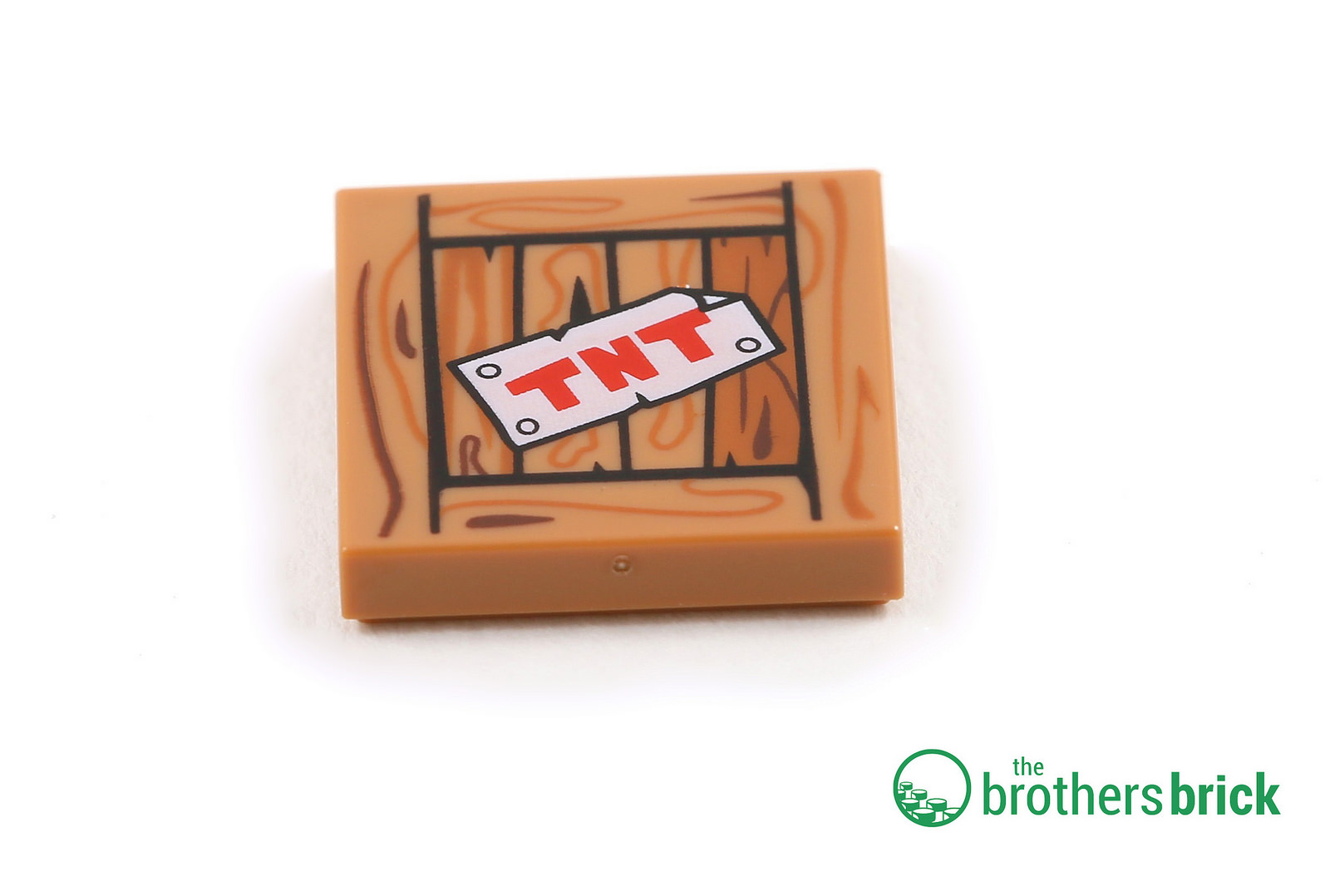 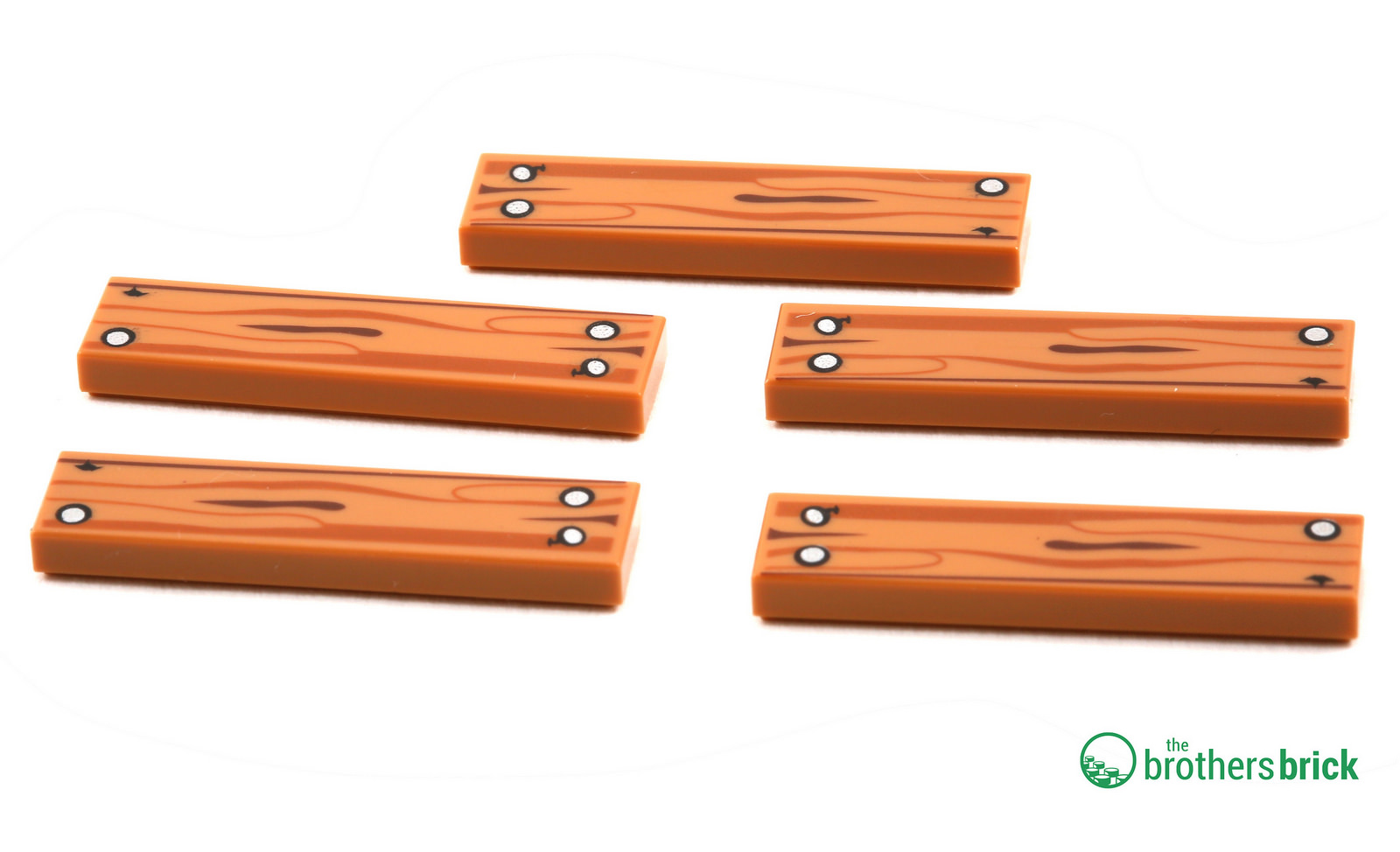 4. Eggs that are egg-shaped. 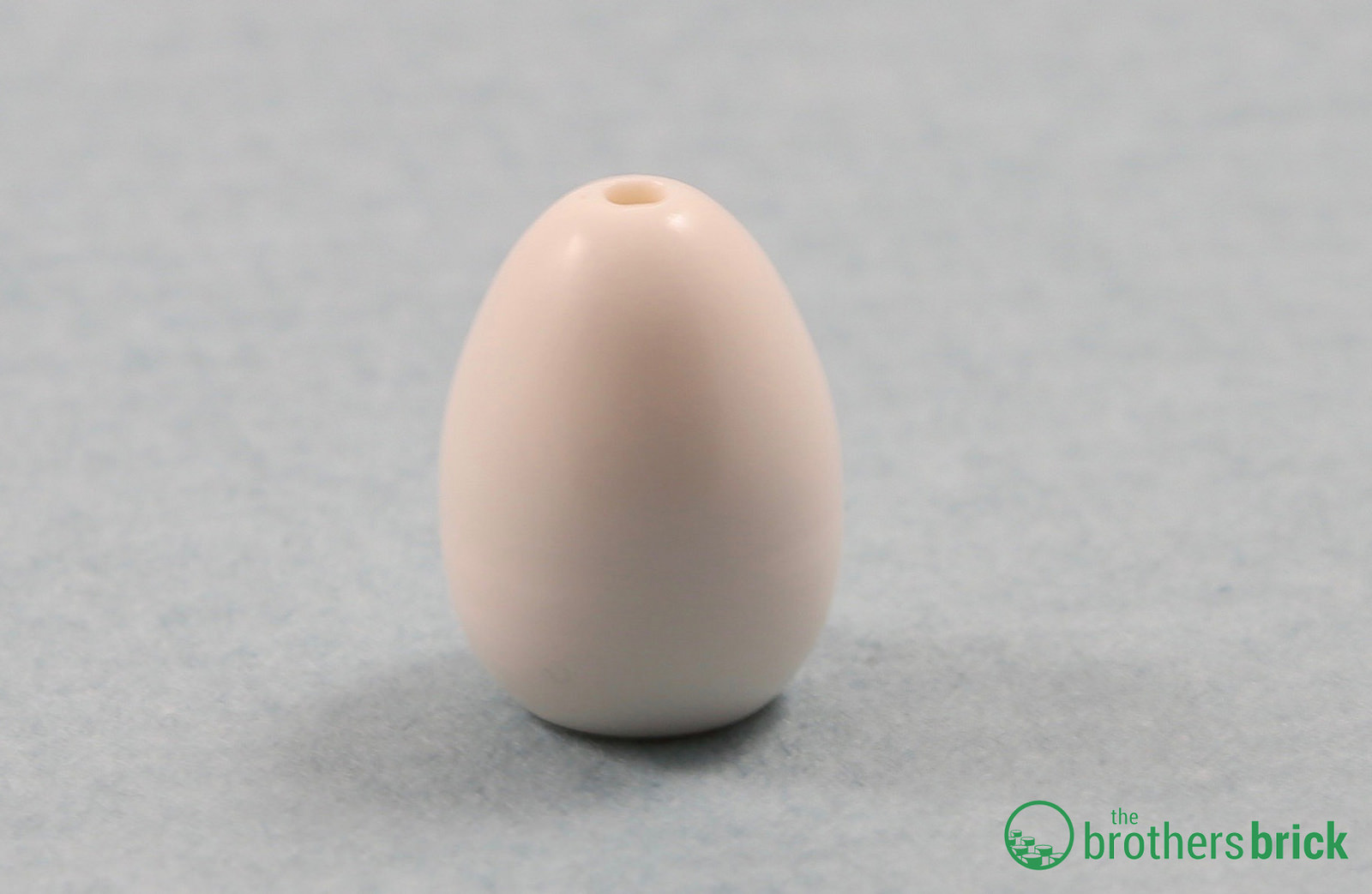 5. The new 2×2 Round brick that is the bottom half of the balloon and makes the balloons beautifully ‘balloon-shaped’. 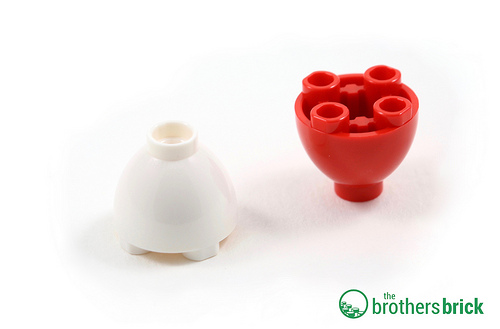 The completed model is colourful and has lots of moving parts. It is simple construction in many ways with three levels, the ground level with the ice cream trough and TNT catapult, first floor with the hot dog stall and the egg hut, and then the Piggy Back Station at the top. It’s not a designer building, part of the Architecture Theme, or something I would put on my coffee table to spark a discussion about enjoying LEGO as a grown-up — it looks very much like a child’s toy. This seems entirely appropriate for the recommended age group. The build is surprisingly robust as a bird target, and the actions on hitting certain target areas are effective. For me, the biggest draws were the printed parts and the re-colours, eg. 1×1 round plates with holes ‘apollo studs’ in pearl gold, and the new parts I mentioned above.

We had visitors round to enjoy Easter weekend, our friend’s six year old loved this build and spent hours catapulting the birds.  He was far more effective at using the Angry Bird catapult than I was and he really enjoyed the play actions that were activated by launching the bird at certain points. I wonder if the size of his hand and method of activating the catapult with his palm was key (I’m not competitive at all…ahem…but it was somewhat frustrating as I would over-egg the launch consistently and then sulkily watch him hit the targets very successfully).

Don’t play ‘who can hit the most targets‘ against a child with small hands, for they will be better than you and it’s hard to lose to a six year old.