Ninjago’s new theme for 2016, called Skybound, takes us to the air in an epic duel between sky pirates and our intrepid heroes, the ninjas. We’ve already reviewed 70603 Zeppelin Raid, and now thanks to LEGO we are able to get our hands on the literal flagship for the theme, 70605 Misfortune’s Keep. The set includes 754 pieces, and we expect it to retail for around $80 when it debuts in the coming weeks. Included are the main airship, a smaller flier for both factions, and six minifigs and a monkey. 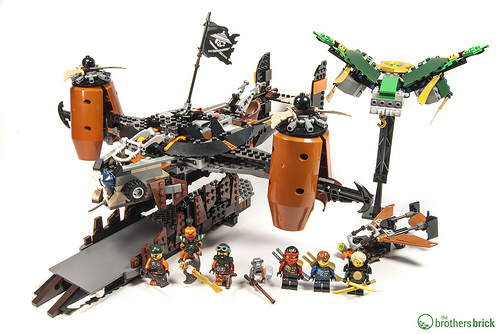 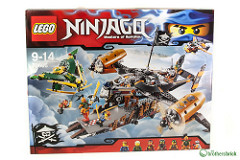 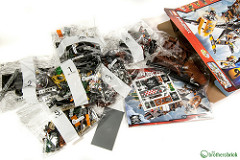 Inside the box are six numbered bags, a bag of oversized parts, a loose dark bluish grey 8×16 tile, and a sealed bag containing the instructions, sticker sheet, and flexible plastic die-cut pirate flag. The instruction bag contained a piece of rigid cardboard to ensure the manual and sticker sheet don’t get damaged, which is a great practice that LEGO should employ in all its larger sets. Currently, the practice is only used occasionally and with no discernible (to me) criteria, and the lack of it often results in crinkled instructions and sticker sheets being found in brand new boxes. The pristine instruction manual here is a hefty 142 pages, and although it’s not spiral bound, I had no issues with it staying open to the correct page as I was building. 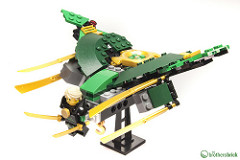 Bag 1 contains ninja Lloyd and his green flier, and Monkey Wrench the silver monkey. It’s not a promising start. Step 3 of the instruction manual has you build the geared system for a pulley and winch which go underneath the flier, and trying to attach LEGO’s string as shown in the manual is an exercise in frustration. How the average 9-14 year old is supposed to figure this out easily, I’m not sure. After several minutes (and a mess of knots) I managed to get it attached, and once everything is in place it actually works remarkably well. Lloyd’s green flier as a whole, thoug

h, looks half finished at best. It’s one of the worst Ninjago craft I’ve seen, and it wouldn’t surprise me at all to learn that it was added to the set at the 11th hour just so the main ship has something to fight. I even added a stand to it for photos, since it can’t land properly. I give this green flier a green thumbs down. 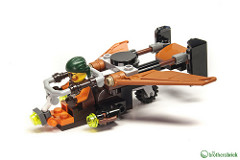 Bags 2-6, of course, build what we all came here to see: Misfortune’s Keep, the sky pirates’ ultimate hideout. The Misfortune is a flying air-craft carrier, having a main landing deck and a smaller aircraft to board it. We start off building the little pirate flier first, then the deck, and slowly work our way up, with the engines attached last of all. The little sky pirate plane is a flimsy, home-brew affair. It has one rear-facing propeller, a single wheel underneath, and the simple pilot cage closes over the pilot who is otherwise unenclosed. Unlike Lloyd’s ship, though, the model properly conveys its steampunk aesthetic. Its wings fold up for stowage inside the main ship. It also includes two stud shooters on either side. Although this little craft won’t be winning any design awards, it’s sufficient. 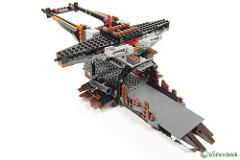 The main build goes quickly and without any hitches. There’s a bit of technic, both to help the structural integrity of Misfortune’s Keep, and to activate the various play features. The flight deck is a single uninterrupted eight-stud-wide surface that runs the length of the ship, allowing lots of room for cargo and smaller aircraft. Two panels on either side fold down during combat to reveal a pair of cannon, and a disk-launcher is positioned just aft of each wing, with a left/right sliding mechanism firing them in succession. The central core of the ship houses a very solid gearbox, to which a red lever is attached. When the lever is turned, the massive engines rotate smoothly to an upright position, turning this giant ship into a VTOL la

nding craft. This feature works surprisingly well, and is incredibly fun. Up front the cockpit is well outfitted, and a cage closes over the pilot easily. Oh, and there’s a boat, if the ship, ninja flier, and pirate flier weren’t enough. It’s a small LEGO rowboat outfitted with some sort of dual-cannon turret, can be stowed between the twin rear booms, and is easily removed for use on its own. 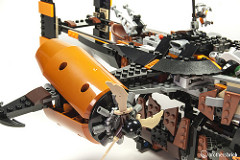 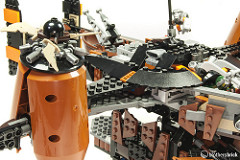 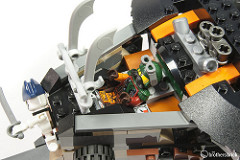 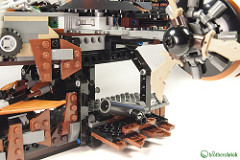 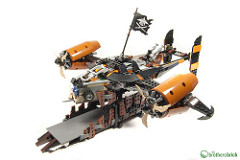 The ship, once completed, is enough to make any steampunk fan’s heart skip a beat. Misfortune’s Keep is a gorgeous ship, black and grey and brown with orange and dark orange highlights. It measures nearly 18 inches on both length and wingspan. While I do stress that the main ship is excellent, it is not without a few minor flaws of its own, and I would be remiss in this review for not mentioning them. The skeleton, attached to the front of the cockpit, does not stay upright. It’s attached with a neck bracket with technic pin, and there’s no friction. Now, maybe it adds to the ramshackle aesthetic to have the figurehead flopped sideways most of the time, but I found it a minor annoyance. The other nitpick is that the small onboard aircraft, the little pirate flier, doesn’t have a way to attach or stay put once landed. The first fun bit of swooshing Misfortune’s Keep (and it’s a fine ship to swoosh), and out flies the little aircraft to plummet to its death below. 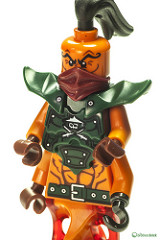 The minifigs in this set are all terrific. The pirate genie Nadakhan (Nadakhaaaaaaaaaan!) uses the new ghost wisps as a leg piece; this time in orange and trans-red. Nadakhan is four-armed, just like the Ninja’s previous arch-nemesis from 2012, Lord Garmadon. Like Garmadon, Nadakhan’s lower torso is a standard minifig torso, but the upper torso is a different piece than Garmadon’s. It’s a dark green armor/torso piece, but sadly it cannot easily be used with legs by itself, since it is essentially a headpiece, not a torso. I thought at first that Nadakhan’s black hairpiece was the same as Aurra Sing’s from the Star Wars line, but it’s a actually a new hairpiece. Like Aurra’s, it fits into the stud hole on the head, and is made of soft rubber. 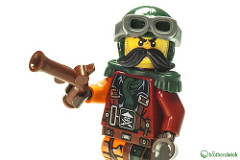 The pirate pilot and gunner each have different torsos, though the gunner’s is the same as the captain’s in the Zeppelin Raid set. The pilot puts to terrific use the new mustache piece from the LEGO Movie theme. Monkey Wrench is great, though the only thing new here is the color. Still, that’s noteworthy, since in the 27 years since its introduction in 1989, the monkey has only ever ap

peared in brown. Monkey Wrench is obviously hanging out with the pirates for some unknown exceedingly-noble cause though, since he’s worthy to lift Mjölnir, Thor’s hammer.

The three ninja heroes — Lloyd in green, Jay in blue, and Kai in red — are pretty par for the course for Ninjago. Lloyd wears a black power armor piece, but has a fully-printed torso underneath. Jay is the only minifig in this set with a double-sided face — one side obviously after his face had an unfortunate collision with a sharp object.

All in all, Misfortune’s Keep is a keeper. Despite its few missteps, it’s still a steampunk flying aircraft carrier, and that’s just too cool to pass up no matter your age. The finished model is one of my favorite set builds in quite a while, and certainly my favorite Ninjago set, plus there’s a host of extra parts included. This new line is shaping up very, very nicely. Here’s a parting shot of Misfortune’s Keep and the zeppelin from 70603 Zeppelin Raid together. 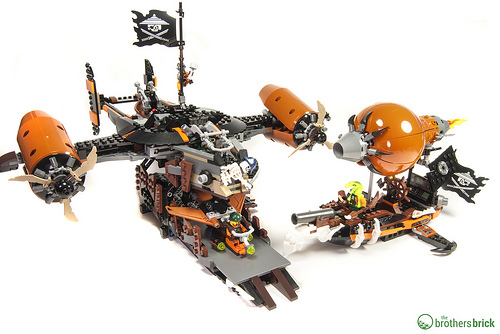