Well it seems we’re enthralled with James Bond all over again with the release of the latest film. Blocks Magazine cleverly realized this and decided to create a feature in their publication celebrating both the 50th anniversary of the legendary secret agent and the aforementioned Spectre movie. I’m a big fan of 007 movies and action adventure in general, so I was very excited about being a part of the collaboration of creations. It was also a bit of a daunting challenge since I rarely build LEGO things even remotely modern in theme.

Thankfully, I knew exactly what scene I would create. Sean Connery was my favorite James Bond, and Thunderball was the first 007 movie I ever saw, so for nostalgic reasons alone I had to go with that. At first I wanted to build the shark pool scene, those minutes of the movie really had me at the edge of my seat and it would be neat to try to recreate it in LEGO. Here some shots of that endeavor: 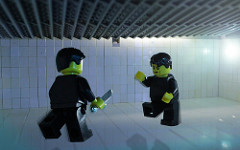 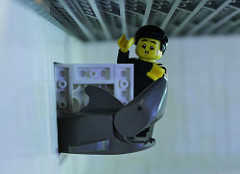 Unfortunately, in order to keep the creation to the standards of the magazine, (family-friendly and without stabbing and blood like the film) I had to scrap that idea. Instead I opted to build the outside of the pool, where James Bond infiltrates the bad guy’s luxurious, well-guarded mansion.

I had some issues with the new plan though, because I had spent so much time planning and buying white tile pieces for the inside of the pool I only had three days to make the bigger outside. Happily for me, my brother is a very talented builder in his own right, and he kindly offered to help me finish my derailed project just in time for the publishers. 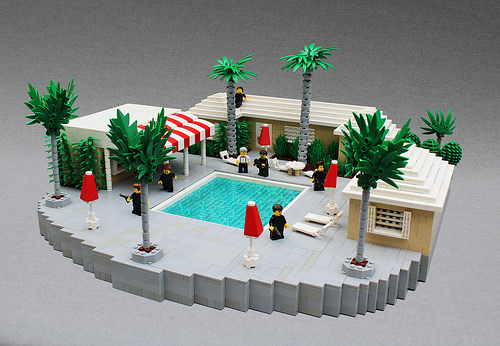 I had fun experimenting with the palm trees. I always like trying different combinations and styles.
But I honestly think the scene really comes alive at night. The LEGO compatible lifelights installed in the pool and buildings really help set the tense mood of the original movie. 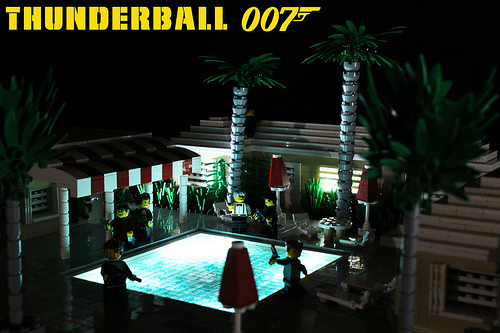 After this, I hope to get pushed out of my comfort zone more often.