German-based Australian builder Arran Hearn is ready to fill the dancefloor and raise the roof with his 1:2 scale DJ setup! This creation started with a brick, namely part 58846 (Brick Round Corner 10 x 10 with Slope 33 Edge). Four of these bricks make up each of the platters on the turntable and, from that simple beginning, the 1:2 scale creation began to take shape. Arran’s  DJ setup is complete with two turntables and a mixer, in the brilliantly named ‘battle-mode’ position – definitely beyond my knowledge as a mere easy-listening, sing-a-long chick!

Arran went to great lengths to accurately reflect the details with custom chromed “Barraki eyes” used for the spindles, custom designed transparent stickers for the outside rim of the platters and the custom boat studs used for the detailing on mixer controls. I had to look twice at the initial Flickr photograph to check I was actually looking at LEGO. It is all hooked up and ready to go, look at those cable tidies keeping all the wires in position. 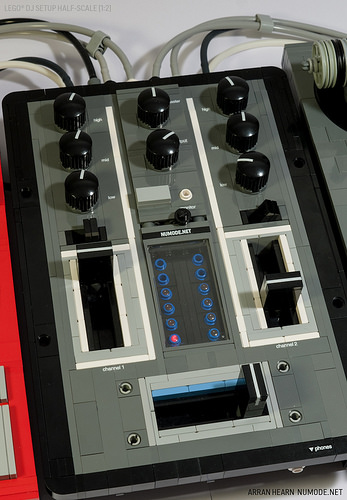 And as if the attention to detail was not enough, power functions are brought via a 9V train controller to light the LEDs on the mixer and spin those platters. Arran also created this video showing off his model next to the real deal: