Over the past week we have focused on the amazing builders who decided to build a SHIP within a month. We’ve looked at pop culture SHIPs, original and very unconventional SHIPs, realistic and near future SHIPs, the super fun minifigure scaled SHIPs, and finally SHIPs based off of one of the most influential games for SHIP buliders: Homeworld.

But before we dive in, I want to congratulate every single builder that participated in this year’s SHIPtember (even those who were too ambitious to complete their SHIPs). It’s an incredibly fun month of building and sharing your work in progress with everyone. You make SHIPtember special.

Today we wrap up our Week of Wonders: SHIPtember edition by revealing the overall best SHIPs, as chosen by the judges, and also the people’s choice.

Again, we have a great prize, thanks to several of members the development team from Homeworld Remastered who have generously signed and donated a copy of the Homeworld Remastered game to the builder of SHIPtember 2015’s Best SHIP – which tradition also dictates will be immortalized as SHIPtember’s 2016 poster boy (much like the 2014 and 2013 winners) and also be featured on next year’s event brick. 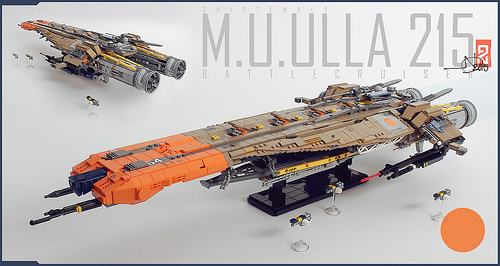 This SHIP is just a perfect combination of elegant piece usage. Jonas manages to add just the right amount of detail, while keeping it clean and stylized. Or as one judge put it: “This thing has the perfect balance of texture, clean lines, and just perfect color blocking”. And Jonas is not only gifted in the art of LEGO building, but is also quite the doodler and even pre-sketeched his award-winning SHIP.

Our runner-up for Best SHIP this year is Josh Derksen (armoredgear7) with his mammoth Demon’s Maw. It not only looks like some kind of demonic claw, but also has lights and motorized features! 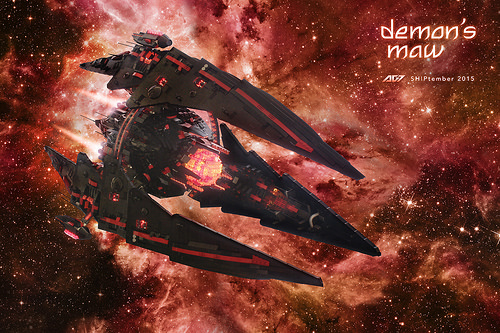 We also asked our friends on the Homeworld Remastered development team to pick and comment on their favorite SHIPs from all of this year’s 120 entries:

1st – Sunder_59‘s The Ark – “Holy crap! I want to see that in a movie.”
2nd – Simon Liu’‘s FE JUNTEERR deep space carrier – “This guy is amazing! Love the ship bay inside of this bad boy. The silhouette is nice from all angles.”
3rd – Kristopher Manabo‘s Vallis Rheita – “This is a big win! Super sexy.”

Now we move on to (in my mind) the most prestigious award: People’s Choice, which was voted on by the builders themselves.

In a stunning repeat, the People’s Choice winner (with 31 points and 13 votes) is last year’s SHIPtember winner, Tim Schwalfenberg (One More Brick) with his Vaygr Battlecruiser:

This shouldn’t be a surprise to our readers, as this is the third time we’ve mentioned this particular model. As the people’s champion, Tim also takes home the SHIPtember Mega Trophy.

First Runner up to People’s choice (with 29 points and 15 votes) is Simon Liu (Si-MOCs) and his FE JUNTERR:

And rounding out the top three for People’s choice (with 27 points and 12 votes) is Jonas (LEGOLIZE IT MAN), which was the first SHIP that we talked about above.

Thanks again to everyone that built, and see you in 11 months for next year’s SHIPtember!