Even though I’ve mainly been building military models over the last couple of years, I appreciate a good spaceship. And I’ve always been disappointed that I haven’t been able to play the iconic and influential Homeworld games. French builder Dorian Glacet has been playing Homeworld 2 lately, and built this great ship (actually a true SHIP at 105 studs long) with classic colors and stripes.

Dorian’s SHIP may look a lot like many of the other Homeworld-inspired spaceships we’ve featured over the years, but when I looked at his photostream, I was struck by the rather innovative approach to the ship’s core, which is entirely “studs-out”:

Dorian then attached greebles and the ship’s skin to this core: 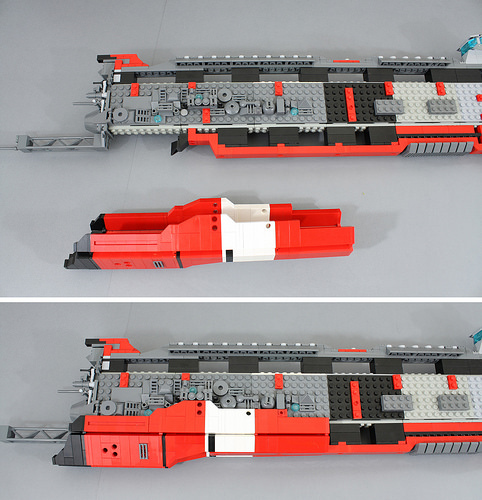 Check out Dorian’s photostream on Flickr for more, including preliminary digital designs and work-in-progress shots.