Until now, all of the pictures Davy Linden (Davekuhh) posted of his awesome Volvo excavator were of it sitting either on his building table or on display at LowLUG events in the Netherlands, with lots of clutter and legs in the background. I’ve been following his progress and have been waiting for decent pictures to appear for months, which makes it all the more frustrating that, now that they have and I finally get around to writing about it, other blogs have already beaten me to it. 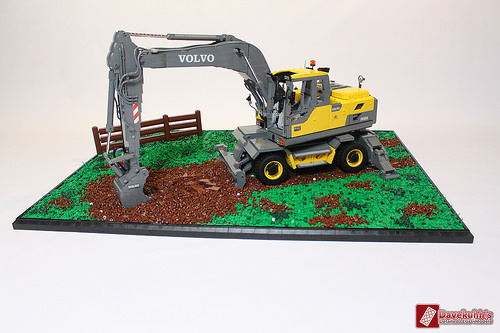 In any case, this is just the sort of model I like and that I know many of you will appreciate too. I had the pleasure of being able to take in all the model’s details at one of the events a few months ago and I also got to see Davy use a dustbuster to vacuum up the ‘LEGO dirt’ from the base on which he displayed it. This is undoubtedly an effective method, but it makes a sound that fans of LEGO normally do not like to hear!

2 comments on “Digging in the dirt”