Friends of mine in the US used to own a Japanese minivan and it was reliable, comfortable and great for road trips, but about as exciting as wet noodles. When I think of Japanese cars in general, the first ones that spring to mind are tiny little boxes on wheels that seem more suitable for a shopping trolley and the second ones are competent but boring sedans. However, this impression isn’t fair at all, as shown by the Datsun Z240 by LegoMarat. 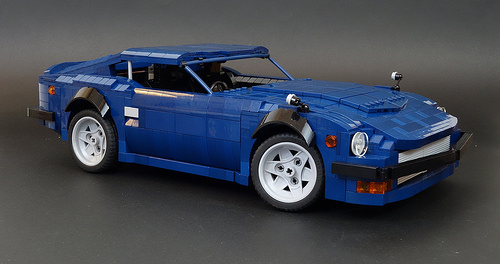 Z-cars are exciting. The 240Z had the looks of a classic long-bonneted sports car, but without the dodgy electrics that plagued similar endeavours from England. The roof on the model looks a bit too flat to me and the wheel arches are a bit awkward, but the model has presence. This is helped by its dark blue colour and the nicely curved flanks.

It doesn’t just look good; it too has some very clever engineering inside. It drives, powered by two Power Functions motors and using a servo motor for the steering. These are controlled via a nifty third-party Bluetooth controller, called an SBrick, which is specifically designed to interface with Lego Power Functions. It allows the user to operate them via an app on their smart-phone or via the internet. Its development was funded via a kickstarter campaign that Nannan reported on in July last year. You could be forgiven for thinking that this too must be Japanese, but it was actually designed in Hungary.

3 comments on “Not all Japanese cars are boring”