A lot of people start their builds by fiddling around with a few pieces until they find an interesting-looking combination. This then becomes the starting point for a cool new mecha or spaceship. That’s not how I do things. For most of my models, I start by planning, followed by a lot of procrastination and getting side-tracked into building other (easier) things and then some more planning, lather, rinse, repeat. Once I start putting parts together things move quickly, but the planning process can take several weeks or, in the case of Airwolf, as long as two years. 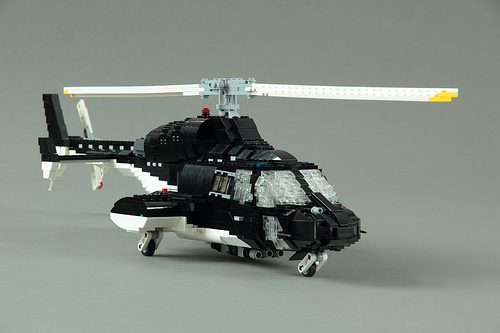 In the eighties, starting with Knight Rider, there were several shows that featured some sort of hi-tech vehicle as a central plot device or even as a character. Both Blue Thunder and Airwolf featured helicopters, but Airwolf was definitely the better show. It had one of the best theme-tunes in the history of television and, though they now appear terribly dated, the plots were a bit darker and more interesting than in most of the other shows, often dealing with espionage and the Cold War. Furthermore, the helicopter itself was based on the super-sleek Bell 222 and was armed to the teeth, with retractable guns and a ventral missile launcher.
The reason why the process took so long is that I don’t start building until I have convinced myself that I can build the model to a suitably high standard, which in this case meant building that sleek shape and those cool retractable weapons. What finally sealed the deal was finishing Blue Thunder, the realisation that I could replicate the shape using various new curved parts and by hinging the cockpit windows, as well as a video I saw of the missile launcher retracting on an RC model.

2 comments on “To snare a wolf”