LEGO has sent The Brothers Brick a copy of the Crafting Box, one of the larger sets from the new minifig-scale Minecraft line. The set includes 518 pieces, and will be $49.99 USD. LEGO hasn’t given us an exact release date, but it should be available in stores around the beginning of November. 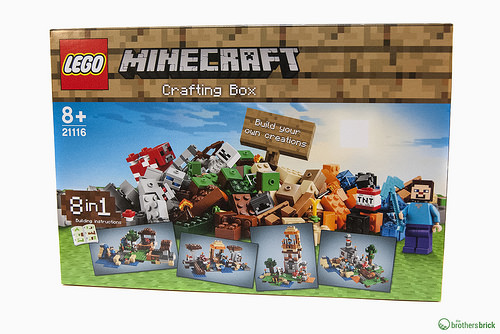 Now, I know many LEGO fans roll their eyes at the fact that LEGO picked up the Minecraft license at all, but I love it. I’m a huge Minecraft fan, and I have a bit of history with combining LEGO and Minecraft. I created the first minifig-scale Minecraft creation back in 2011, and was one of three fans involved in the development of the first official LEGO Minecraft set, 21102 Minecraft Microworld. During the development phase of that set, we started off trying to create a minifig-scale set. We quickly realized, however, that it would be very hard to do justice to Minecraft at that scale within the price range that the LEGO Ideas (née Cuusoo) program was targeting, namely $30-$40 USD. The current lineup of six minifig-scale sets is a valiant — but flawed — attempt at doing what the original set could not. 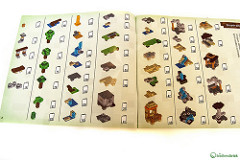 The other 5 sets of the new Minecraft line each build a specific scene; the Crafting Box is intended to allow builders to re-create the Minecraft experience, with mixing and matching and rebuilding galore. Some would argue that LEGO by its nature already allows that, and I find it hard to disagree with that opinion. Nevertheless, the Crafting Box is an interesting concept for a set. It contains instructions for 8 different scenes (you can only build 1 at a time), and inspirational photos for other scenes. 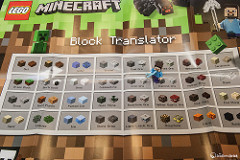 Inside the box are 5 bags and 2 instruction manuals, and a large rather cool “block translator” poster, which shows LEGO’s equivalent of many of the various Minecraft blocks. Somewhat unhelpfully, the 5 bags are numbered 1, 2, 2, 2, and 2. The first instruction book constructs Steve, a skeleton, red mooshroom cow, oven, torches, crops, fences, etc. The other bags contain the terrain. As I built the accessories, I found it exceedingly odd that this set does not contain a crafting table piece. This is the most basic of things in Minecraft, and is made of only 4 basic pieces in the LEGO sets. The only possible reason I can fathom that LEGO wouldn’t include it in this set is to force fans to also purchase the other sets. 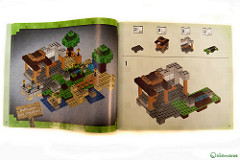 I decided to build the second scene, since it seemed to be about the largest and most interesting. The instructions for assembling the scenes are all contained in book 1, but book 2 is full of building instructions for dozens of small vignettes and objects, which are put together in various ways to create the larger scenes. Consequently, building a scene is an odd mix of flipping back and forth between instructions books, as book 1 tells you it needs a certain sub-assembly, and then provides a page number for that sub-assembly in book 2. Each sub-assembly seems to have a unifying feature of one or two 2×4 bricks overhanging an edge by 2×2, which is used to connect the elements together. Herein lies the first problem. Since my scene was made up of 14 sub-assemblies of terrain, and most are connected to their neighbors by only a single 2×4 brick, the whole is very fragile. There’s no way the completed set could be picked up. Also — and I feel this has to be said — this creates a very mottled and visually unappealing scene. Even to me, a veteran Minecraft player, the scenes don’t really look like anything much recognizable. They’re just a hodge-podge of colors and bricks; an earth-toned rainbow warrior of terrain. 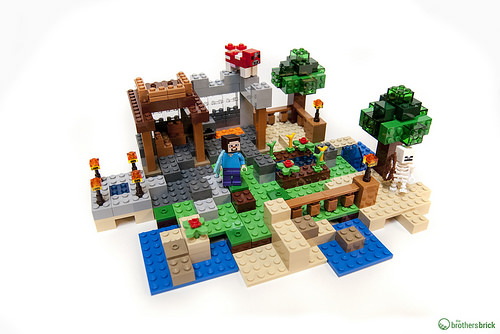 It’s very apparent that these sets were not created by designers with more than a passing familiarity with the game. There are several aspects which violate the game’s rules, such as the instructions calling for trees to be placed on sand, or a red flower growing in the tilled earth in the garden (which is legal, but makes no sense). And who puts an open lava pit in their home? That’s just inviting disaster. One of the inspirational photos has the skeleton in what appears to be a hot air balloon. Now, I’m all for builders using their imaginations and ignoring the instructions to build their own cool models, but why inclu 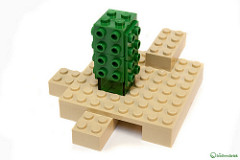 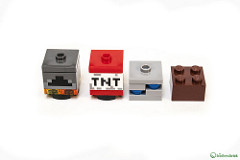 de something in a scene intended to be a particular game which doesn’t exist in that game? Next, when I created my minifig-scale Minecraft diorama several years ago, I carefully thought through techniques to mimic many of the different styles of blocks in the game.  Some of the solutions I used show up here; they were the obvious solution, such as the ores. Other aspects I think the official sets have done very poorly. The cactus is horribly ugly here, made of trans-green 2×2 bricks and green brackets (it looks better in the photos than in person). My solution was to stack 1×2 grille bricks, which is even simpler, and looks more accurate. I initially thought the same of the trees, judging by the box photos, but after building them and seeing them in person, I think LEGO’s solution works well enough. One of the features I find highly aggravating is that not all of the Minecraft “blocks” are the same size. Some “blocks” are 3 plates (1 brick) tall, some 4 plates, and some 5 or even 6. I understand this was done for simplicity, but it looks messy and makes it hard to actually recreate structures from the game. Ideally all “blocks” would be 2×2 studs and 5 plates tall.

I also feel that LEGO has gone far astray with the minifigs. The creation of a new cubic head for the minifig is unnecessary and ugly. The Minecraft minifig looks terrible with rounded arms and a cubed head. A minifig is relatively cubic already, but some allowances must be made for the difference in media between a video game and LEGO. The classic minifig is iconic, and I think LEGO does itself a disservice by not using it completely here. The minifig tools are another place I think LEGO has hit wide of the mark. 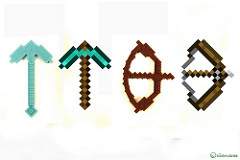 There is no good reason not to simply use LEGO’s existing pick-axe and bow. The bow, in particular, looks hideous as its pixelated shape is translated verbatim into the real world. It’s the same shape and size as an official LEGO bow, but looks worse. The pick (and all the other tools from the other sets) have a diamond-shaped protrusion at the bottom, in a lame attempt to mimic the pixelization seen in the game. Instead, it just looks weird and inaccurate, and makes the pieces far less useful for other applications. Finally, I always find it curious when LEGO has the opportunity to make something uniform, but does not. For instance, both the mooshroom cow and the skeleton/player have cubed heads; the mooshroom’s naturally has a 1×2 plate footprint, while the others fit on a minifig neck. The heads are almost, but not quite, the same size. Why they’re not precisely the same size is beyond me.

Ultimately, this set fails as an adequate minifig-scale Minecraft set. The sub-assembly feature is novel, but it’s too weak to be picked up, and looks bad when assembled. Minecraft fans will be better off ignoring the instructions and creating their own scenes with the pieces. The unique Minecraft elements here do not justify the price: they are only the TNT, oven, bow and pick, and 3 heads, most of which look better with standard non-Minecraft LEGO elements. The majority of the 518 pieces are basic bricks in the 2xN family. At $49.99 USD, it won’t be a terrible way just to stock up on earth-toned bricks, even if Minecraft is of no interest to you.