I remember getting a used M:Tron set as a kid and discovering how awesome magnetism is, and how I wanted to learn where magnets came from. Thanks to Blake Foster and his M:Tron Magnet Factory, I finally know the answer:

Not only has Blake created an inspired M:Tron base and stunning landscaped base, but he’s added a monorail and some really impressive movement which you can see in the following video:

I was able to see this incredible creation this past weekend at BrickFair Virginia, where it took the Best Space trophy (check out the time-lapse setup video). I sat down with Blake to get the details on his layout:

TBB: With all the classic LEGO space themes or even other pop culture references why did you choose M:Tron as a theme for your build?

BF: It’s part nostalgia and part obscurity. I loved M:Tron as a kid, and yet it doesn’t get all that much attention from the AFOL community. Compared to Neo-Blacktron or Neo-Classic-Space, M:Tron is a rarity. That obscurity can be a good thing, though, because there are more opportunities to do something original. I really wanted to make something unique, so M:Tron seemed like a good theme to do it in.

BF: I started toying with ideas for this project 4-5 years ago. I was in grad school at the time, though, and didn’t have the budget to complete it. I started working in earnest two years ago. By my best guess, it took about 3,000 hours of building, 462 Bricklink orders and I would estimate 100,00 bricks. Here is an early work in progress image of the build: 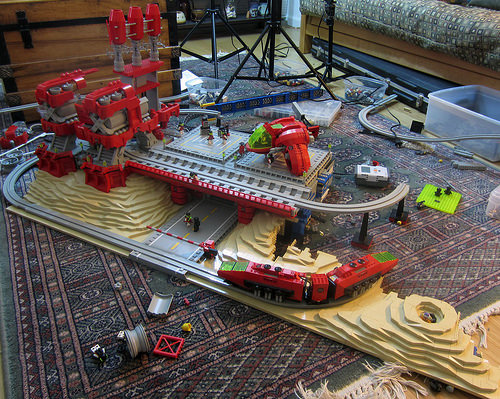 TBB: Where did you get inspiration from?

BF: Inspiration was a constant challenge with this project, although I’ve never played the game, I spent a lot of time looking at Halo concept art. I also look to industrial infrastructure, since it’s naturally spacey. The antenna structures on the right (one of my favorite sections) were inspired by an old WWII antenna on top of a building in the Brooklyn Navy Yard. 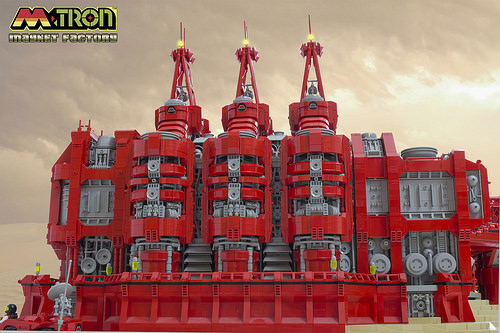 TBB: Walk us through your process and how you tackled this project?

BF: The very first thing I sorted out was the monorail layout. There’s very little flexibility in fine-tuning the track, so I had to start with the track and build around it. Next I built the train, since it’s frustrating to find that my favorite little detail on the train collides with an unmoveable part of the model (that effort ultimately failed because I decided I didn’t like the train and rebuilt it in January). Finally, around Brickfair 2012, I began amassing a huge amount of tan. I have done that kind of SNOT landscaping before, but never on this scale, and so I had to buy the parts to do it. I actually went overkill, because I have more tan than I know what to do with left over. 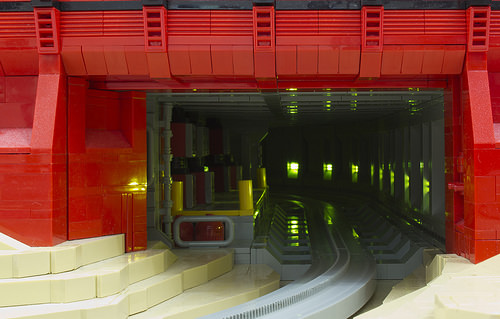 With the “annoying” parts out of the way, I started work on the model. The very first thing I built was the roadway in front. At that point, that was only place where I had planned anything beyond the basic layout, so it was the natural place to start. The tunnel entrance on the right side was one of the major uncertainties in the beginning, so after building the center section I worked my way clockwise around the model to delay that decision as long as possible. One of the advantages of a model this size is that when I’m stuck on one part, there’s usually a different part that I can work on, and often in the process of building other sections I find the answer to the thing I was stuck on. At minimum, everything that I built guided the shape of the thing attached to it, so the sticky parts got resolved whether I actively thought about them or not.

TBB: The landscaping is phenomenal, it’s not the first time you’ve done the sideways building style -can you give our readers some tips / advice?

BF: My goal with the SNOT landscape is to create lines that suggest sand tossed around by the weather, almost like something you would see in a sketch. Natural processes are chaotic, so to get that effect there are some longer lines and some shorter ones, and they converge and diverge and start and end in a way that looks natural and semi-random. At the same time, it can’t get to chaotic, or you lose the effect of lines running through the terrain. The thing that really helped me get that right is building with a bright, directional light source so that there are strong shadows on the vertical surfaces of the terrain. That really makes the lines jump out.

Since the studs are always perpendicular to the slope, the studs need to change direction as the terrain wraps around the model. There are only two parts that I used to make corners–cheese slopes and the 1 x 2 slope with 2/3 cutout. These parts are nice because they allow the vertical surface to turn a corner without showing a stud.

TBB: Does this model have an interior like your other large MOCs?

BF: This model has a partial interior.There are small vignettes behind the windows where you can see in. There’s also a detailed interior room below the landing pads in the middle (visible through the door in front or by lifting off the roof), and the inside of the tunnel on the front right is fairly detailed. I did not build a full interior for two reasons. First, the monorail tunnels are necessarily quite wide in order to accommodate the 9-stud wide train. Consequently, despite the size of the model there isn’t a great deal of interior space to work with. Second, it already took two years to build the thing without a full interior, and I didn’t want to drag it on even longer for something that’s mostly hidden.

TBB: You displayed this at brickfair, VA, how did tackle the design challenge of making this transportable?

BF: The model breaks into 7 large modules, two on each side and three in the center, and a multitude of smaller detachable chunks. I staggered the seams through the landscape to make them hard to spot, and hid them in crevices or greebly sections on the buildings. The real trick is getting the modules to align properly. While the SNOT landscape causes alignment issues throughout the model, the boundaries between the modules are by far the most problematic, because there’s not much structure forcing things into alignment. Generally my answer to that problem is brute force. That is, assembling the model takes quite a bit of pushing and shoving to get things in place, and then Technic beams hidden in the interior keep anything from moving. 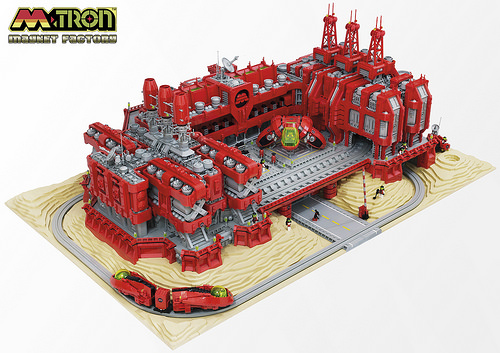 TBB: If you had to do it over again, what would you change?

BF: I planned some parts of the model more carefully than others. I actually sketched out the structure on the right before I started building it, while I made up the left side as I went along, and it shows. If I could do it over, I would have planned a little further ahead with some parts, so that I could have that kind of coherence throughout the model.