A few week ago we reviewed two of the four new sets for The Hobbit: Desolation of Smaug. With the movie opening this evening and all of the sets now available in stores and on LEGO.com, we’ll dive into the third set, 79011 Dol Guldur Ambush,

which is the smallest of the lot. 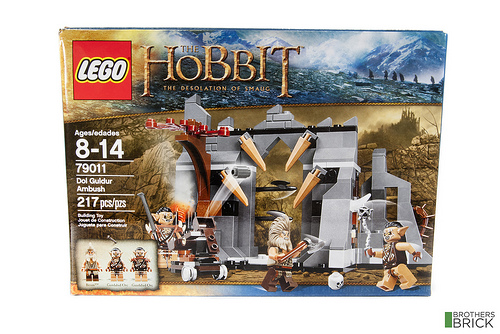 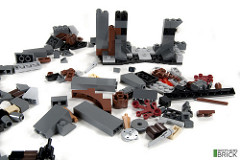 79011 Dol Guldur Ambush comes with a $19.99 USD price tag, but has an admirable 217 pieces and three minifigs packed in. Taking place in the second film, the set portrays a scene not pictured in the book, in which Beorn ventures to Dol Guldur, the stronghold of the rising dark force we will later know as Sauron. Inside the box are two unnumbered bags and a very crumpled instruction manual. This is a terrific set for parts, particularly for castle builders, as nearly the entire set consists of black, greys, and browns. The instructions first call for the construction of a small double-catapult, which is really a plate with two wheels and two of the mini-catapults. It’s effective, but hardly inspired. The main portion of the set consists of the ruins of Dol Guldur, an ancient fortress. Here we get a bit of broken rocky wall surrounding a large entryway. Of course, as the 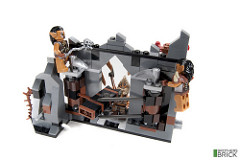 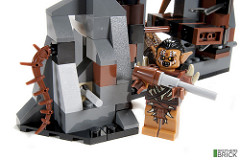 set name implies, there’s an ambush. On each side of the door there are lever-controlled booby-traps: on the left are two axes, and on the right a giant hammer contraption. Neither are actually triggered by a pressure plate or anything — you simply swing them into place independently with your fingers via a knob on top. To the right of the main doorway is a segment of rock connected by a hinge brick. This swings aside to reveal — you guessed it: a flick-fire missile. A spare missile is included if you really want to go nuts. That’s about it as far as play-features in this set are concerned. The real noteworthy part here, though, is the wall itself. Much like the Mirkwood Elf Army wall, it is constructed almost completely from very small pieces. The designer went a little crazy with the Brick, Modified 1 x 1 with Stud on 1 Side, using 20, when fewer than half that number actually utilize the extra side stud. However, I see this as a bonus rather than otherwise, since the modified brick tends to be more useful. There are also two of the “dougnut tiles,” or Tile, Round 2 x 2 with Hole in dark grey. This is the only set that is actually released yet which contains this highly useful piece, though other sets with it are in the lineup for the new year. 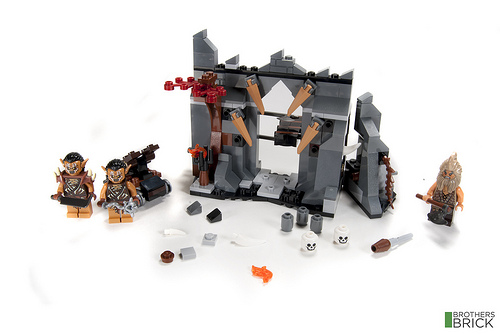 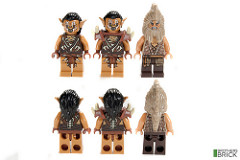 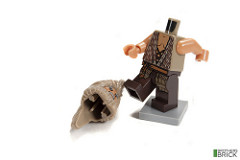 There are three minifigs in the playset: two Gundabad orcs and Beorn. The two orcs are the twins of the two included in the Mirkwood Elf Army, except that the two here haven’t gone prematurely bald. Mighty woodsman Beorn is the unique figure to this set, and he is a profound disappointment. The great furry mane is not a new hairpiece, but is actually part of the head. There is no excuse for LEGO to have taken this route, since the part of the head that is visible is clearly shaped like a normal LEGO head. Nevertheless, the hair and head is all molded as one, reducing the usefulness of it considerably. I won’t bother to enumerate here all the times LEGO has managed to produce similar head/hair combinations without resorting to this sort of shoddy work.

Ultimately, however, this is a really excellent set. The minifigs are not worth bothering with, but the bricks make the set more than worth-while. The wall, while not particularly exciting, is very nicely done, and it even connects up to the bigger 79014 Dol Guldur Battle

set to make a bigger playset.