79013 Lake-town Chase is the medium-sized set from the new year-end lineup of Hobbit kits, set to release in conjunction with the second movie on Peter Jackson’s Hobbit trilogy, The Desolation of Smaug. Some of the new sets are available through Amazon with a ship date of Dec. 1, though sadly Lake-town Chase isn’t available at the time of writing. 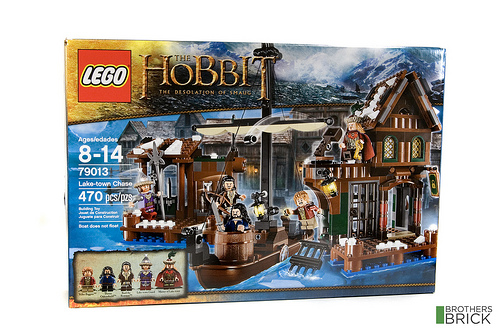 79013 Lake-town Chase depicts a scene presumably from late in the second film, when our heroes arrive in Lake-town, the village built upon Long Lake under the shadow of the Lonely Mountain. It’s a town built upon a pier, with the entire town raised above the waters of the lake to act as a natural moat and to aid in defense against the fiery breath of the great dragon Smaug. The set is priced at $49.99 USD, weighing in with 470 pieces. Included are two of Lake-town’s structures and a longship. 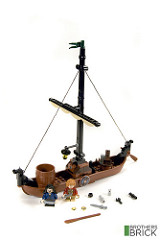 The box contents contain no surprises: 4 numbered bags, 2 instruction manuals (2 bags per), a very small sticker sheet, and the loose boat mast. Bag No. 1 builds the ship, Bilbo Baggins, and Thorin Oakenshield. The ship is a great build, cleverly placing 2 rowboats stern to stern to create the hull. The boat is the twin of 7016 Viking Boat against the Wyvern Dragon from 2005’s Viking theme. I’m OK with that, though, since the Viking theme was one of LEGO’s coolest non-licensed themes in the last decade, and the 7016 was one of the better sets from that line. The few minor differences are simply swapping out a few  details, such as utilizing the newer smooth round shields instead of the old stickered Technic disks, plus the addition of a nifty brick-built furled sail. The shields here are printed with a Viking-esque double fish pattern which looks fantastic. There’s a large barrel in the fore of the longship to finish up the Barrel Escape scene from the last wave of sets (but still from the second film). Also included is a mini catapult in the aft. Bilbo is naturally equipped with Sting and the One Ring, and Thorin is armed with the gladius. As per usual, two extras of the One Ring are included, along with an extra oar and some typical spares. 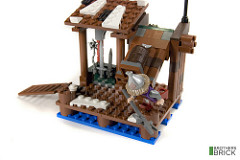 Bag No. 2 builds the smaller of the 2 buildings. I’m not entirely sure what sort of building it’s intended to be. Part of it seems to be some sort of armory, containing a removable rack with extra weapons. The opposite half of the building has a small enclosed space, with a flip-up door/barrel of fish. The action is controlled via a knob on the side. There’s a ladder on the side that can function as a gangway between the two buildings. For both of the buildings, the pier is depicted by placing large plates atop 1-brick high pillars over blue plates, a visual language LEGO has been using since 1991’s 6267 Lagoon Lock-up. This bag also contains the only generic figure of the set, the Lake-town Guard, who is armed with a fancy pike. 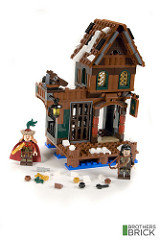 Bags No. 3 and 4 together make up the larger structure, which is a jail. True to form with all LEGO prisons, there’s a lever-activated break-away wall segment for easy escapes. The neighboring house has an upper floor containing a simple table and lamp, though no ladder, and there’s a balcony above the cell which contains another mini-catapult. The entire building is open in the rear. All 3 of the stickers are used in this section. While I’m not typically a fan of stickers, the ones included here are pretty innocuous. There are wood plank stickers which are applied to 1×4 and 1×6 brown tiles, and the jailhouse sign hanging out front is stickered with a padlock image. I went ahead and applied all 3, since I can see them being useful in their stickered forms in other creations. There are also 2 more of the of the reddish-brown “Gothic” arches which I noted in 79012 Mirkwood Elf Army. Both this building and the previous are frosted with patches of snow, which looks quite nice and increases the visual interest of the buildings considerably. This segment includes the final 2 minifigures: heroic Bard and the Master of Lake-town, carrying a bow and a pearl gold key, respectively. 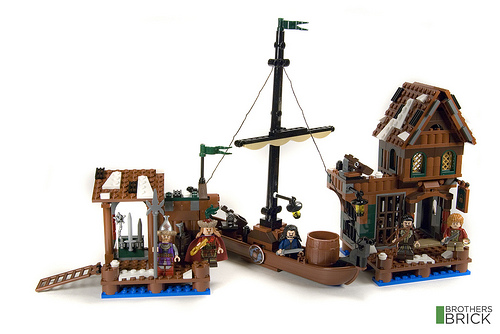 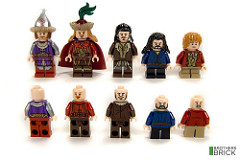 I understand that LEGO feels it necessary to include protagonist characters in every set in the theme, but I really wish this set had included more guards or townsfolk instead of Bilbo and Thorin. Thorin, at least, has a torso print that is unique to this set. Bilbo is identical to versions that have appeared in multiple previous sets. The generic Lake-town guard looks snappy in an ornate purple frock over armor. The helmet is a very detailed accessory, with a silver top, dark tan fur brim, and brown leather side flaps. The crest on the helmet is quite generic, so it won’t look out of place in other settings. The guard’s pike now has a hole in the bottom that is almost, but not quite, the size of a plume. You can fit a plume in, but it’s extremely tight and doesn’t seat all the way. It’s an odd change, but of no real consequence. The Master of Lake-town has a detailed suit of fine clothes and an ornate hat that incorporates his flowing hair. The hat has a plume hole in the top. The Master also wears a double-sided cape of dark tan and dark red, which looks fantastic. And finally, there’s Bard. In every trailer I’ve seen for The Desolation of Smaug, I can’t help but see 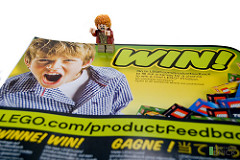 Orlando Bloom’s Will Turner character from Pirates of the Caribbean. The semblance is perpetuated in the minifig version of Bard, who looks more like Will Turner than the official Will Turner minifig. Bard is sporting Qui-Gon Jinn’s hairpiece in black, which is a new color for that piece. The LEGO kid is still featured on the back of the instruction manuals, looking like an adolescent R. Lee Ermey as he screams at you to take the survey.

Lake-town Chase doesn’t seem to contain a lot of chase, though it does contain a nice bit of Lake-town. It’s a solid set; the buildings are well-built and looking nice, and the ship is great. There’s not much in the way of unique or new elements, aside from the arches, but the vast majority of the pieces are brown or dark brown, with plenty of log bricks, so if you want to stock up on brown, this is a good way to do it. Fans of the line will be interested in it for the 4 unique figures. Fans can create much more interesting wooden structures than the ones found in this set, but any equivalently sized fan-created set would cost at a minimum twice as much, so we can’t be too harsh on LEGO.

Be sure to also read our previous review of The Hobbit’s 79012 Mirkwood Elf Army.