The first wave of kits are rolling out to accompany part 2 of Peter Jackson’s Hobbit trilogy, The Desolation of Smaug, which appears in theatres next month. This wave consists of 4 sets, priced at $20, $30, $50, and $70, respectively, and are available for preorder from Amazon with a release date of Dec. 1. We’re starting our reviews in the middle of the lineup, with 79012 Mirkwood Elf Army, the $30 set. 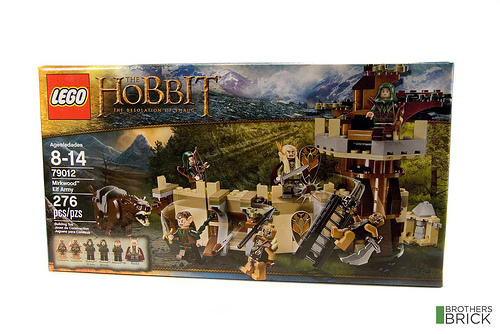 79012 Mirkwood Elf Army is a small forest battlement manned (elfed?) by a squadron of 4 wood elves. It’s under siege by a duo of orcs, one of whom rides a warg. With 276 pieces for its $30 price-point, it fares well for a licensed set, and only gets sweeter when you consider that it includes 6 minifigures. It’s the Hobbit equivalent to the Lord of the Rings’ 9471 Uruk-Hai Army. 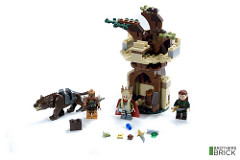 The box contains 2 numbered bags, a 10×10 octagonal plate with hole, an individually bagged warg (which is new here in dark brown), and one annoyingly crumpled instruction booklet that wouldn’t stay open without weights on the corners. The first numbered bag contains the warg rider, Elf-King Thranduil, and the generic Mirkwood elf, as well as the pieces for the tree-fort — ahem, I mean forest battlement. The forest battlement is a large, brick-built, hollow tree stump, concealing a cubbyhole for a barrel full of green gems — well, one trans-green gem and one trans-green 1×1 round plate. The most interesting part of the trunk is the use of the new 1x3x3 arch, aka the gothic arch, in brown, which is the first time that piece has appeared in brown, and is only the third color currently available. You get 4 of them in brown with this set. 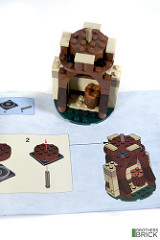 Atop the stump, which is about 8 bricks tall, sits the 10×10 octagonal plate on a turntable. The allows the entire top portion to rotate around the clickyturntable. The top is covered in a mixture of crenellations and foliage, which disguise a giant catapult. The catapult is actually a fig-flinger, which seems far less useful in a siege than the traditional methods of throwing rocks and fiery bombs. When activated, a tree branch is thrown back, revealing the catapult. Oddly, the tree branch that’s thrown aside contains a bar 3L inside the brown 1×1 round bricks that make up the limb. Presumably this is for strength, but I tested the segment with and without the bar, and didn’t note any significant difference in strength. So it’s unnecessary, but extra parts are always a good thing. 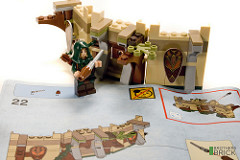 Bag number 2 finishes out the set with the rest of the battlement’s wall, the two elf archers, and the remaining orc. The wall is small, with three articulated 6-stud segments for a total of 18 studs in length, and connects to the tree-fort via a pair of Technic pins. This allows it to be placed on either side of the tree-fort. Despite its small size, it’s entirely brick-built, with no “wall” type pieces, and in fact mostly consists of 1×2 sized bricks. The set consists entirely of earth-toned pieces (tan, dark tan, brown, dark brown, light bluish grey, olive, and dark green), which is terrific for those looking to flesh out their landscaping collections. The front of the wall utilizes the second unique arch element for this set, which is the 1x3x2 arch, aka the Prince of Persia arch, in light bluish grey. There are 3 of these in this set. It’s just not a proper action set these days without including a flick-fire missile, and the middle wall segment does not disappoint. 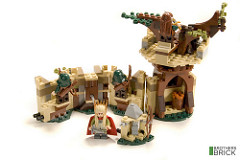 The wall has small segments on the back side for the elf archers to stand on while raining down arrows on the hapless orcs approaching, and the top has the same small crenellations as the tree-fort. There are also two awesomely-printed oval shields that serve as decoration on the wall’s exterior. A separate little rock piece contains clips for weapons, including a spare longbow. Finally, the charging orc is provided with a ladder to scale the wall. 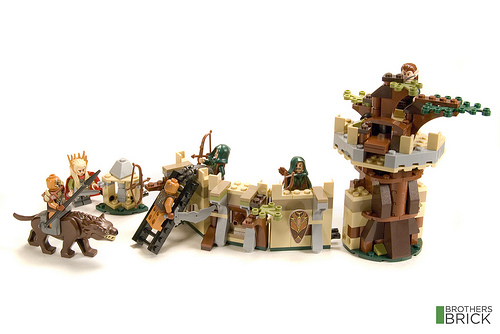 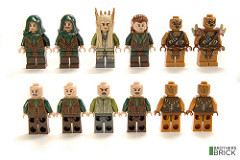 With 6 figures in the box, and the word “army” in the name, you know that the minifigures are the real point of this set. They are all up to LEGO’s usual high standard for minifig detail, with all 6 containing front, rear, and leg printings. The two elf archers and the generic elf have the same printing for the torso, legs, and head. The two archers, are, of course, armed with longbows, and each carries a quiver on his back. The generic elf gets a giant Prince of Persia dagger — there’s an extra in the box, so he can dual wield if you’re so inclined. Thranduil holds a standard long-sword, and gets a terrific olive green torso overlaid with an ornate champagne gold print. His hair/crown mold is the softer rubbery plastic so that it can fit over the cape in back, and is tan with the crown painted gold and the ears painted flesh. Elf-King Thranduil is unique to this set. The two Gundabad orcs are identical, except that the warg rider wears a spiky pauldrons piece and carries a spear instead of a notched scimitar. It’s unfortunate that among the 6 minifigs included here, there are only 3 different torsos/legs/heads. LEGO ought to have made at least one of the elves different from the other two in something besides accessories. Even a different head would have helped, if LEGO didn’t want to create an entirely new print for a torso. 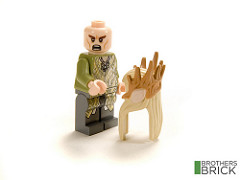 All told, though, this set is a marvelous deal. 6 minifigures in any set is a pretty good bargain, and in a $30 set it’s all the better. The part selection is great, with no single-use pieces, and two highly-useful unique elements in great colors. This set is a must-have for fans of the line, or for anyone looking for a great parts pack.