The Starfighter Telephone Game was started over two years ago and now for the first time a round has been completed. The game works just like the grade-school game from which it got it’s name. Someone starts off by building a starfighter and ships it to the next player, they keep it and build a new fighter inspired by the previous. Game carries on until the first player receives the final fighter.

With three rounds underway and dozens of builders spread across the globe, I think it is safe to say that the game is a success (even with a few delays and hiccups along the way).

Mark Stafford just posted the pictures of the final version of the starfighter for his team (which I was lucky enough to be a part of). All I have to say is that Mike Yoder is a lucky boy to end up with this thing. 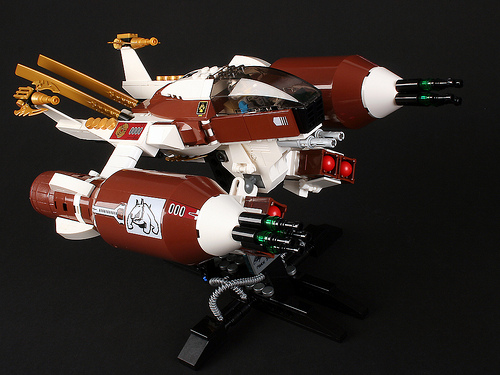 Mark also did up a quick video showing the progression of the design from start to finish.

Mike just did up this edit of the linear progression of each version. It is very cool just how much it changes from step to step.