Despite a rich history of his country’s basketball players who played in the American NBA to draw upon for inspiration, players like… Detlef Schrempf, Uwe Blab and Dirk Nowitzki…for some strange reason Alex Jones (Orion Pax) is still fixated on Michael Jordan. So journey back with Alex and TBB, to the 1990’s when grunge music, Pokémon cards and MJ ruled the planet. #23 also comes complete with his pet bull, on which he rides about dispensing justice and expensive footwear with a flaming sword!. 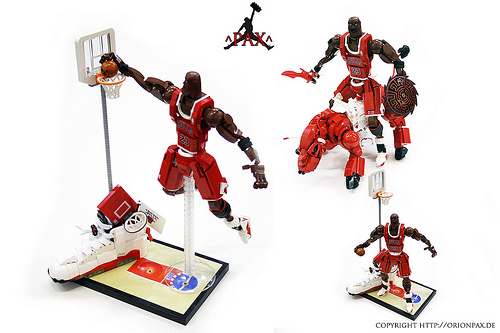 I’m not sure what to say about Alex’s solution for MJ’s visage…I mean, what do you say about Tim Allen in blackface? For more photos, head over to Orion Pax Designs.