David Roberts (David Roberts 01341) is under the influence and it shows. Dave cites nnenn, Peter Elson and Stewart Cowley’s Terran Trade Authority books as inspiration, which is as good as it gets for Sci-Fi ship design. According to the builder, the Wasp F1 is a high-speed interceptor designed to operate in space or the atmosphere. To me it looks like a paper airplane that has been painted by someone with a checkerboard fetish, but looks can be deceiving. The model features pop-up weapons, landing gear and something unique to Sci-Fi ships; an under-mounted cockpit. 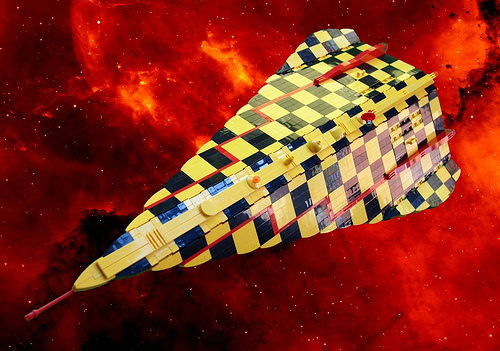 You know I always like to hook up the stat-junkies when I can. The model is 86 studs long, with a wingspan of 40 studs. It weighs 1.45kg (3 lbs 4 oz) and is composed of around 2,000 bricks. With such a fine catalog of models, I’m surprised this is David’s first appearance on this blog of blogs.