Sometimes relatively simple scenes can provide the most opportunity for showing terrific quality. Take, for instance, this beautiful diorama of the Roman invasion of Britain by James Pegrum (peggyjdb) which is really just a bit of shoreline with some soldiers. I’ve seen the trans-blue 1×1 round plates used as water many times, but James has made better use of it here than I’ve seen previously, adding waves and some flecks of green, and he also extends that technique to make an interesting gravel beach. James also puts in great little details such as the Romans wielding iron-tipped spears, while the barbarians fight with LEGO’s older, solid-color spears. 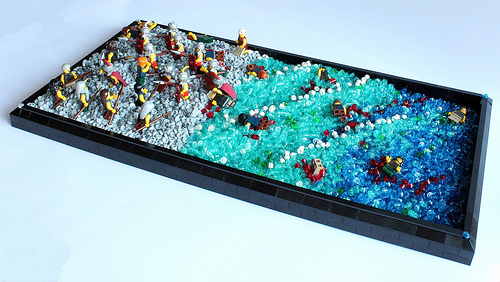 6 comments on “To Land Upon A Foreign Shore”