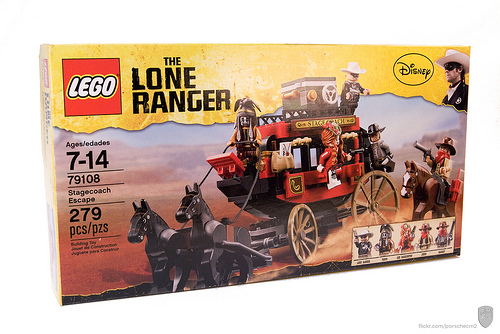 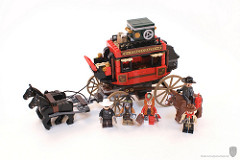 The Lone Ranger sets are finally about to ride out to stores in a few weeks, so we’re bringing you a few reviews of them so you’ll have a keen eye when they appear. The first set up is 79108: Stagecoach Escape. It’s a complete action set, comprised entirely of a large stagecoach and a separate horse and rider. Despite having a retail price of $30 USD for what amounts to fancy wagon, it actually feels like quite a good value.

Inside the box are three numbered bags, the instruction manual, and a sticker sheet. Sadly, the notion of putting the sticker sheets and instructions in a bag with a piece of stiff cardboard for protection seems to have been a short-lived improvement. No such accommodations were made here, and 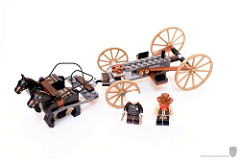 the sticker sheet was distinctly worse for the wear, having been banged around between the bags a few too many times. All three bags build various sections of the coach, with the first giving the chassis, the other two making up the cabin. Obviously, almost all of the 279 pieces are in the coach itself, which is ludicrously out of scale with the minifigs. Of course, this is nothing new for LEGO vehicles, and it’s rarely a problem. This set takes advantage of the large scale to do some really good shaping on the coach, and still have a fully functioning interior. So despite being a solid 18 feet high (in minifig terms) it’s a really terrific looking stagecoach. The chassis is quite nifty, being a bit more advanced than the standard wagon wheel attachment. It cleverly uses struts to give some degree of suspension to the rear axle of the coach. The front axle also turns to provide a small 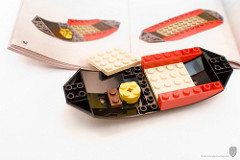 amount of steering. Oddly, when it came time to attach the reigns to the horses, I noticed that my string had a knot tied in it. It seems a very intentional knot, but I can’t figure out why it’s there, as it’s not called for in the manual. Another weird thing I found was the base of the cabin, which calls for a brown 1×2 plate on each side, placed onto the boat hull piece that makes up the floor. A tan 4×4 plate is placed over this, but they don’t actually connect, which makes the tan plate a bit wobbly. I can only assume this is a mistake, though fortunately it’s an easily remedied one.

The completed stagecoach cuts a fine figure, and is plenty fun to play with. Each side of the cabin features two opening doors, and the 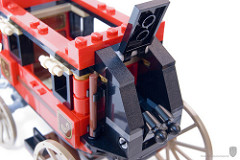 roof pops off for easy access to the interior. The roof is also home to a mail bag, and a removable opening bank safe, with a solitary bar of silver. The silver, much to my chagrin, is painted silver and not chromed, since LEGO has almost entirely phased out chrome now. The rear luggage compartment has some sort of catapult to fling luggage at unsuspecting pursuers. This catapult doesn’t seem to work very well, but at least it’s not more flick-fire missiles. 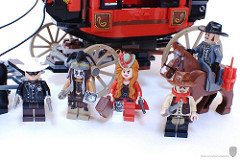 The Stagecoach Escape comes with five minifigs and three horses, a very respectable number for a set of this size. All the horses are, of course, the new posable style, and it’s terrific to get two black and one brown horse with very generic tack in a single affordable set. The five minifigs are the Lone Ranger, Tonto, femme fatale Red Harrington, and then two characters named Jesus and Barret. It should be no surprise to anyone that all the figures are immaculately detailed, with front and rear prints all around. Only Tonto and Red have double sided heads, though, mostly likely because the revealing cowboy hats of the other three would make this unnerving. One cool feature is that Barret is given two cowboy hats, a black Lone Ranger-style 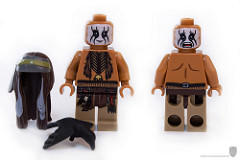 for his good-guy persona, and a brown Indiana Jones-style for his outlaw mug. And speaking of the hats, the Lone Ranger hat is a marvelous addition to Western headgear. It’s generic enough to look great in colors besides the Lone Ranger’s distinctive white, and it has that classic Stetson curve. This line has really stepped up to the plate with Tonto and Red’s hairpieces. Recall, if you will, the hair-and-hat combos from the Pirates of the Caribbean line, which were molded as a single unit, and consequently pretty useless outside their original context. Not so, here. Both Tonto’s bird and Red’s hat are separate pieces from the hair, attaching with a mini-pin, just like the Friends dolls accessories. Tonto’s bird is a pretty sweet new piece, and I can’t wait to incorporate it into a creation. I’ve already got some ideas. Next there is the new pistol design. They look great for the scale, though I can’t help but be a bit saddened that they’ve given up some usefulness as construction elements in the pursuit of accuracy. There are three of the new pistols in pearl silver, and two in dark pearl silver, counting the “extras.” The classic western rifle looks out of place with the new pistol now, though. The old pistol and the rifle were a matched set, sharing the same styling cues, but now the difference is jarring. 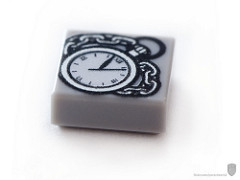 The Stagecoach Escape is a great set, and it’s destined to be one of my favorites of any of the Western themes. Despite the oversized scale, the coach looks awesome, and it’s highly playable. The minifigs are great, and easily recycled into more generic Western characters, and there are some good parts to boot. You can’t go wrong with this set.

is out on Amazon.com and the LEGO Shop online now.