Another of the sets I bought last week is the smallest of the 2013 Ninjago sets. This is the last wave of Ninjago sets before Legends of Chima takes its place as the go-to theme for battling minifig games, and I’ll be sad to see it go. 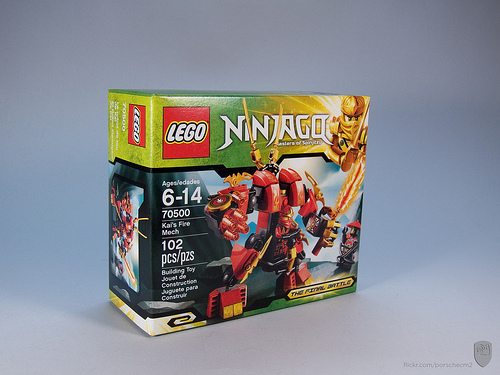 Now, I didn’t follow the mythos of Ninjago, or watch the show, so I can’t tell you a lot of backstory about the theme beyond the very broad strokes, but it’s sure included some sweet sets, and 70500 Kai’s Fire Mech

is definitely one of them. 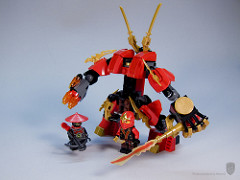 The set contains a small mech and two minifigures, and feels like a bargain with 102 pieces and a USD $9.99 MSRP. The mech is basically the little sibling of the previous wave’s Samurai Mech,

which is my favorite set of 2012. The mech is built with ball joints, which allow it quite a lot of pose-ability. Add to that the full-fingered left-hand, and this is probably Lego’s best mech of this size.

The gold highlights are terrific, especially since so many of them are weapons, which are always useful. This is also the cheapest set thus far to include the new inverted 2×2 tiles. All of the printed parts except for the minifigs are stickers, which I didn’t apply, even though they do look very nice. The only new piece here is the fire mech’s sword, which is transparent yellow infused with transparent neon orange, for quite a cool effect. Here are photos of the inventory pages, for those who are interested. 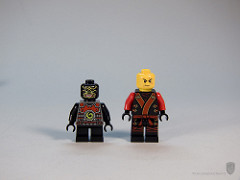 The minifigs look great. Kai has a snazzy black and red outfit, which is just generic enough to be useful for other themes.

The bad guy has a fantastic grimacing visage reminiscent of the masks samurai wore to look fearsome, and a red quiver and hat, both of which are new in that color to this wave of sets. Both minifigs have back printing.

My verdict: this set is a winner. If you’re a fan of Ninjago, mechs, or good Lego deals, you should pick this one up. I enjoyed it so much, I’ve already bought two.