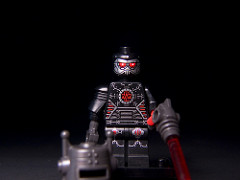 In the USA, at least, Series 8 of the insanely popular Collectible Minifigs is trickling out. A few days ago, I picked up a full set (minus one, due to an improper baggy identification on my part) and have thoroughly enjoyed them. I wasn’t nearly as excited for this line as I had been for previous ones; I think in part because the novelty is just wearing off at this point, 8 series in. But once I got my hands on them and took a good close look at them, my trepidations fell away, and I went back to feeling that the Collectible Minifigs are as awesome as ever.

The evil robot was an awesome surprise. I hadn’t seen images of it without the helmet on before I bought it, so the head was totally new to me. It’s a fantastic print, and almost has a mechanical skull vibe. 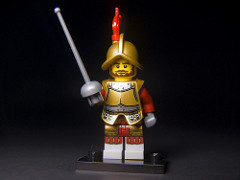 Other favorites of mine are the Diver, Thespian, and Conquistador. I’m probably just a sucker for period costumes, though. The Thespian, or Shakespeare, as I think he looks, is probably my favorite of the lot. Renaissance figures haven’t been common in LEGO, with most Castle figs being much earlier in style, and predominantly militaristic. On that note, though, the Conquistador is a great military figure from this same general time period, and really makes me want to revisit the old Armada theme of the 90’s. The Faerie was also a surprise to me, as I expected the wings to be flimsy plastic, like the wings on the angel keychain. Instead they’re a hard ABS molded neck-piece, which is far superior. 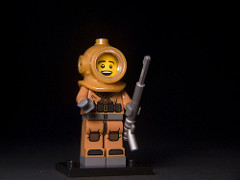 Oddly, the Diver is the only one of the lot with printing on the back. He’s super fun, though, with the chunky lead shoes (just 1×1’s) and a huge faceplate, which is actually a magnifying glass piece.

Many of the other figs, to me, are much less interesting, however, like the Skier and Cheerleader, which are basically differently colored re-issues of previous figures.