Back on August 5th when I first highlighted the excellent Mars Science Laboratory Curiosity Rover project by Stephen Pakbaz (Perijove) on LEGO CUUSOO, the project had been online for about eight months and had accumulated about 1,300 votes.

In a sign that timing is everything (with a little help from a few friends on the web), Stephen’s Curiosity project hit 10,000 supporters this weekend. In fact, the project gained its final 5,000 supporters in less than 24 hours. 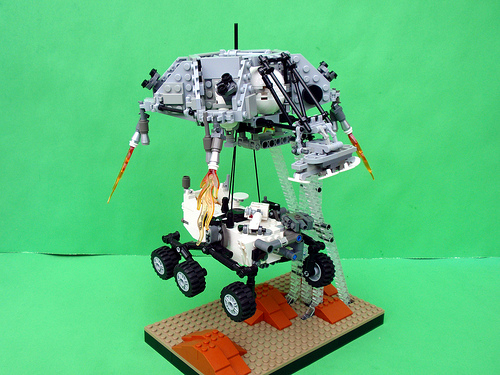 (I wanted to use a picture of the model we haven’t already used several times here on the blog. Stephen’s proposed model for the project doesn’t include the skycrane, but how awesome would that be?!)

I used Stephen’s instructions to build the rover myself yesterday, and it’s a really excellent model. The build itself was very enjoyable, and I even learned a few SNOT techniques I hadn’t seen before. The final model includes so much detail and functionality it’s really fun to play with, in addition to being just shy of fully functional (with working “rocker bogie” suspension, stowable mast & arm, and little details like forward and rear haz-cams). 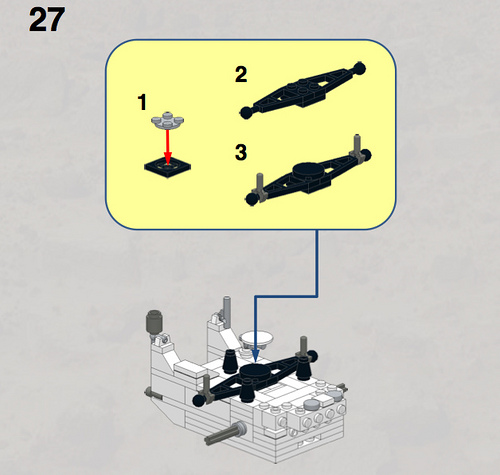 However, Stephen’s rover does include a handful of unusual parts, and parts in quantities or colors that I don’t have (especially the Technic parts for a mainly SYSTEM builder like me). Even with my substantial, relatively well-sorted collection, it took me the better part of an afternoon to dig around and gather all the parts, and I still had to place a couple small Bricklink orders to replace parts I don’t have at all in the right colors.

All of this is to say that an official set will be a great way to easily get all of the necessary building materials for a reasonable price — as I’m sure LEGO won’t be charging $2 for the white bracket (of which the model requires two), for example.

Congratulations to Stephen, and I can’t wait to see how LEGO handles this particular project. Specifically, I’d love to see LEGO accelerate the approval of this project, given LEGO’s existing partnership with NASA, the clear educational value of the model, and the current “space fever” gripping the world.

Finally, in case you missed it last week, be sure to check out our interview with Stephen Pakbaz (who worked at JPL as an engineer on the Curiosity project) right here on TBB.