UPDATE (June 14, 2013): Stephen’s LEGO Curiosity Rover will be the next LEGO CUUSOO set!

The Brothers Brick has featured the Mars Rover Curiosity CUUSOO project before as one of the more original and stand out projects on LEGO CUUSOO right now. But here is a surprising factoid, the creator of this model, Stephen Pakbaz, aka Perijove, was an actual engineer for Jet Propulsion Laboratory (JPL) and worked on designing the very same Mars Rover in real life! The Brothers Brick decided to interview Stephen. 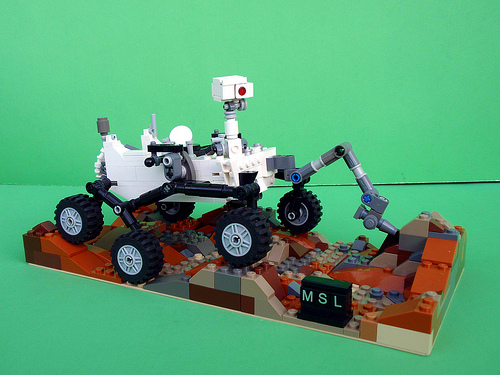 TBB: Tell us about your background?

TBB: What was your position at Jet Propulsion Laboratory?

Perijove: My position at the Jet Propulsion Laboratory was a Mechanical Engineer in the Structures and Configurations Group. I also sometimes took on the responsibilities of a Cognizant Engineer.

TBB: Can you tell us about your work on the Curiosity Rover? 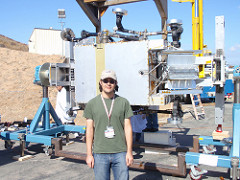 Perijove: The Curiosity rover was the first spacecraft I ever worked on after I finished with school in 2007. Even back then, the rover development was well underway, but there was still a lot of design, assembly, and testing left to do. I took part in all of these activities. I designed parts like brackets and covers and was responsible for their development all the way through delivering them to the technicians that would put them on the rover. Other tasks included writing procedures, assembling, and testing things like telecommunications systems and antennas. Types of testing included vibration, shock, and thermal-vacuum to simulate the different environments that would be experienced by the rover. One particularly fun test was bolting an engineering model of Curiosity to a 50 foot diameter centrifuge and spinning it up to over 20 g’s in order to simulate the forces the rover would experience during entry into the Martian atmosphere.

TBB: How long have you been a Lego enthusiast?

Perijove: I have been a LEGO enthusiast since at least elementary school. My own collection, at the time, was mostly pieces like simple bricks and wheels, but I would often play with friends and their collections too.

TBB: What experience did you have with Lego as a kid?

Perijove: My collection began to include more complex pieces just before middle school. I mostly built minifigure-sized robots and spaceships. Play scenarios often including using all my pieces to build a massive spaceship to move my entire minifigure population to another habitable planet before their current one was destroyed by a huge asteroid or a rogue robot. (Wow, that just brought on some powerful nostalgia!)

TBB: Did LEGO play a role in your chosen career path?

Perijove: LEGO absolutely had an impact on my career path. In high school, I spent much of my free time designing things like manned missions to the moons of Jupiter in graph paper notebooks. I often drew the designs with LEGO pieces so I could eventually create real models. This was also a great way to learn everything I could about space travel from interesting destinations and past missions to new forms of propulsion and radiation protection. LEGO has also been a great tool for quickly making quick prototypes of various mechanisms and other ideas to see how they worked.

TBB: What were your favorite sets/ themes as a child? 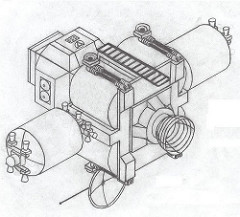 Perijove: Most of the space themes, of course, were my favorite, like M-Tron, Ice-Planet 2002, Exploriens, Roboforce, etc. Technic and Trains were great too, but those kinds of sets were often too expensive for me. I would have to say one of my favorite sets was 6338 Shuttle Launch Pad.

TBB: Did you ever experience a dark age?

Perijove: I never experienced a total dark age, but more like a dim age, while I was at school in Indiana. I couldn’t bring my entire collection with me form California, but I did manage to keep a few choice models and pieces with me. During this time, I also satisfied my LEGO habit as a volunteer and mentor for kids in the First LEGO League, a popular nationwide LEGO robotics competition. I had a lot of fun teaching kids about the mechanical possibilities of LEGO and seeing their robots compete and cooperate with eachother.

TBB: Did having first hand experience on the real Curiosity help with the design of the Lego version?

Perijove: I learn best by seeing and touching, which perhaps explains my affinity for mechanical engineering and LEGO. The rocker-bogie suspension system on the rover was just so cool, that I needed to make a LEGO version that I could play with. Being so close to the real rover all the time, designing a few small parts for it, and working with larger assemblies certainly helped me to understand its features, what they did, and how they worked. I’m hoping the LEGO Curiosity rover does the same for others.

TBB: Did you follow the progress of the rover’s trip to Mars?

Perijove: I kept up on every piece of information about the rover that was available to me. This was the first project where I was finally able to put my years of engineering education to use, so I really wanted it to be successful. I saw the landing live and ate plenty of peanuts beforehand for good luck, a tradition at JPL before critical mission events. 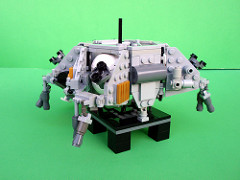 TBB: How did you feel about the landing?

Perijove: The landing itself was a conflicting conflagration of emotion. In my mind, I was confident of the success of the landing. My heart and other organs were filled with excitement, fear, nervousness, anticipation and, of course, curiosity. I knew I wouldn’t be able to sleep afterwards and spent that time calming down, talking to family and friends, and watching all the events that happened shortly afterwards.

TBB: Any thoughts about the historical significance of this achievement?

Perijove: The landing itself was quite historic. The ability to land such a large payload so precisely will be extremely important to future efforts. Though it’s still too early to be sure of the historical significance of the scientific returns of the mission, I’m sure it will be something wonderful. As for the significance of my own involvement, I think it’s kind of cool to think that long after the Great Pyramids on Earth have perished over time, it is possible that the rover I worked on will still be preserved on Mars (unless, of course, it becomes a victim of space looters).