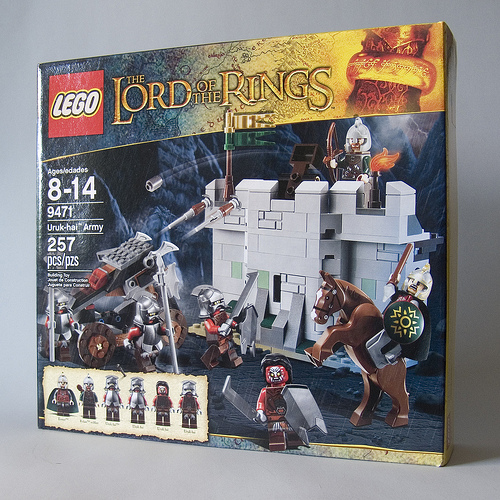 I was elated this morning when my local toy store got in the new Lord of the Rings and Monster Fighters themes. I immediately picked up several of the smaller ones, and I’ll review them over the next few days as I get time. I’m super excited to finally lay hands on these sets. Today I’ll start with the largest set I picked up, 9471 Uruk-hai Army, from the Lord of the Rings license. Clocking in at $35 USD, it’s not a bad size set, considering it’s a licensed theme. With 257 pieces, it’s fewer pieces-per-dollar than the unlicensed themes, but still comes out cheaper than many Star Wars sets, and this set includes six minifigs. 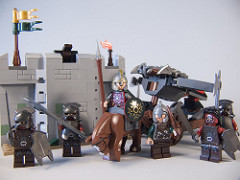 The box art is gorgeous, with a large image of Sauron’s finger wearing the one ring, with a fantastic map motif behind it. The rear of the box is pretty standard, showing all the play features, and also advertising the forthcoming LEGO The Lord of the Rings video game. Inside the box are two numbered bags, and the instruction manual. Unfortunately, it seems the brilliant idea of packaging the instructions in their own bag with a stiff piece of cardboard didn’t last long, as my instructions were quite curled and bent. On the upside though, there’s not a sticker in sight. The instructions continue the map motif lightly in the background of each page, which looks terrific. 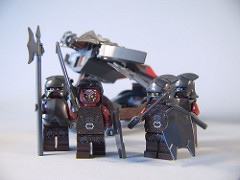 The first bag contains the four Uruk-hai and the ballista. In keeping with recent practice, and especially the habit of licensed lines, the figures are all exquisitely detailed with both front and rear printing, and all the heads are double-sided, with a neutral expression and a battle expression. The legs and hips all have printing as well, though on the front only. The machetes and armor of the Uruk-hai are all in pearl dark grey, and seem to be of excellent quality. There are only a few pieces here that are new to me, like the Bracket 1×2 – 1×2 Inverted (recently released with the Marvel line), and a lovely brown 1×4 tile with a wood grain printing (ever so slightly different than the one found in The Burrows set). 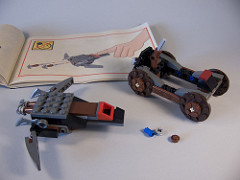 This is, though, the first time I’ve seen 4×4 round plates used as wheels on a siege engine, instead of the old method of 4×4 round bricks, and I think I prefer the bricks, which look more like heavy wooden wheels and less like bicycle tires, even though these are probably quite serviceably within scale. The build for the ballista is pretty straight-forward, with a simple Technic frame. The ballista fires two flick-fire grappling hooks. Like most flick-fire projectiles in official LEGO sets, I’ve never been able to get much distance or speed. At least these have a little pushing mechanism, instead of pushing directly on the projectiles, as in some sets. 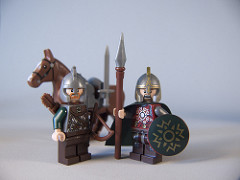 Bag two is for the wall chunk from Helm’s Deep, and Eomer and the Rohirrim Archer (or, as LEGO puts it, the Rohan Soldier). Eomer seems a little out of place in this set, though until they make a Meduseld set (here’s hoping!) I suppose this location makes the most sense from a play-set standpoint. Eomer’s helmet is in its own bag, as is the case with most specially painted pieces. The helmet is quite amazing, both in shape (which the Rohirrim archer shares) and in printing, with golden horses on each cheek. The two men’s torso and leg printing is no less detailed, with wonderful generic armor (front and back) that will be of great use to Castle builders. The soldier’s torso is my favorite of the set, and would fit perfectly with the recent dark green dragon faction from the Kingdoms line. And then, of course, there’s the new horse. 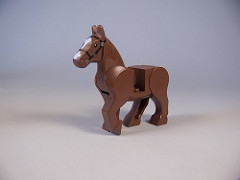 It’s really quite something. I have to admit that LEGO has done an absolutely fantastic job of re-designing something so iconic as the LEGO horse. I immediately grabbed a classic horse, and took some time to compare the two. The new horse’s head is slightly wider, meaning it can’t wear the head-pieces designed for the old horses, but LEGO has assured us that they’re making new ones. The body, however, while posed differently, retains the classic dimensions, meaning that classic bardings still work. The new pose-able leg-section allows for a two-legged reared up stance, and the legs actually make a soft click into place when they’re fully extended. The horse is remarkably well balanced when standing on two legs, and isn’t particularly off-balance even with a rider or when posed running.

There aren’t any new pieces in this section beyond the horse, though several pieces do make appearances in useful colors. Most noteworthy of these is the 1×2 brick with brick pattern, which appears here in light grey for the first time. This piece is going to be amazing for castle-building. Again, the construction of the 16-studs long wall is straight forward, though it is worth noting that the wall is built modularly, and is intended to fit with 9474 The Battle of Helm’s Deep to make an even longer wall, which is rather a cool idea. The wall includes a small catapult fixed in place, so you’d best hope that the Uruk-hai don’t veer to the left or right as they charge. Beyond that, the set is pretty sparse on built-in play features, though somehow I doubt kids (and big kids) will have much trouble figuring out what to do with it. 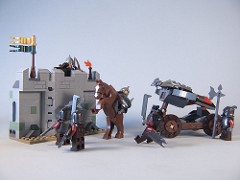 My conclusion: With six highly detailed minifigures, a bit of wall, and a ballista, this set is a great introduction to the Lord of the Rings line, even though it doesn’t come with any members of the Fellowship. I’m sure a great many of you plan on buying the whole Lord of the Rings line no matter what I say, but if you want a larger orc army, this is a fantastic way to get it.