Wojciech Scrat demonstrates that LEGO sharks seem to be evolving in size — starting with the old-style sharks, continuing with the more recent LEGO Pirates shark, culminating in the LEGO DUPLO shark that rivals megalodon in scale. 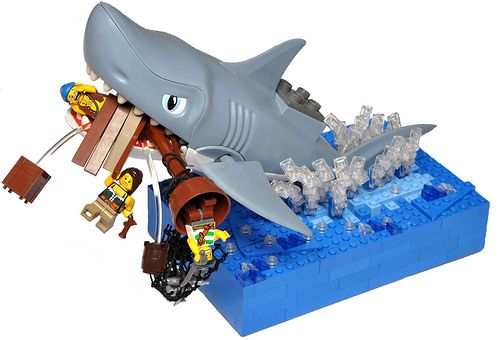 The compatibility between DUPLO and SYSTEM is a bit of a moot point here, given the dynamic way that Wojciech has arranged the shark, but two 2×4 SYSTEM bricks would fit on the four DUPLO studs on the shark’s back. Why has nobody built the largest LEGO shark with a frikkin’ laser beam attached to its back? Or an Atlantean king on a howdah aboard his favorite war shark?

(Okay, so my timeline of LEGO sharks is off: The DUPLO shark should be in the middle. LEGO evolution is still an emerging science…)