Our third installment of interviews by Keith Goldman takes us into the mind of a builder that — let’s be honest — you either love or hate. Take it away, Keith! 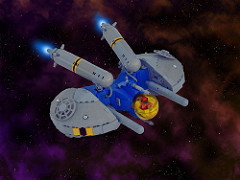 This week’s builder is known as “nnenn,” and should need no introduction if you’re a fan of science fiction models, or a follower of any number of groups on Flickr.

Nnenn’s name has become synonymous with both great building and controversy, beginning with his debut on Classic Space forum, where he managed to rile up more than a few purists with his tape, knife, and clone-brand components.

I take special notice of any builder who has fan-boys, if nothing else to make sure their army isn’t larger or more rabid than my own.

I met nnenn, as per his rather specific instructions, at the Palm Springs Wind Farm in Palm Desert, California: I didn’t actually see him, but we spoke through a grating at the base of a windmill. There was no small talk, we just talked about LEGO.

Keith Goldman: You always have interesting backgrounds for your creations. How do you select the background color for each model, and what sort of lighting do you use? 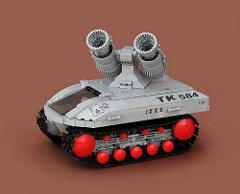 nnenn: I shoot everything outside by hand; winter is a struggle and wind is my foe.

The background posters are chosen for contrast: first, in value (dark for a light model, and vice-versa) or second, in color (blue for an orange model, etc.) I approximate the original color when digitally imaging so the model’s reflectives don’t look odd.

KG: Like many sci-fi builders, you have mentioned that your models draw inspiration in part from the “Terran Trade Authority” series of illustrated books from the late 1970’s. Is there any other go-to creative reference you consider when designing a model? 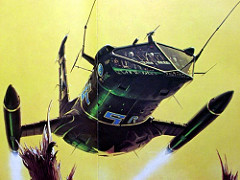 nnenn: I’m influenced by many things (including other builds) but I don’t have a dominant source of inspiration, nor do I keep a ready reference bank. Because seeing the same thing repeatedly tends to dull the awe, I purposely avoid perusing my muses (which is why I don’t keep ‘favorites’ on Flickr, incidentally.)

Though I am rarely at a loss for ideas, I do become unmotivated from time to time, so a few quick glances does more to spark my competitive side than provide fodder for new content.

KG: Do you purchase clone-brand sets, or is there a Bizarro-World BrickLink? If the answer is sets, which theme if any do you prefer?

nnenn: I’ve wished many times for a way to get clones by the piece (I’ve even contacted MegaBloks about it) but no, I resort to purchasing whole sets for just a handful of unique parts… themes don’t really play a part in my acquisition decisions. I’m holding out for cost-effective 3D printers.

More of Keith’s interview with nnenn after the jump:

KG: If you’ve been to a LEGO fan convention as a registered attendee or “Johnny-Public Day,” give us your best anecdote. If you have not, what is your impression of the conventions as seen online, or through conversation with other fans?

nnenn: Sadly, I’ve never been to a convention (for various, justified reasons) though I’d like to attend. In all these years I’ve only met one Lego-related person face-to-face: a Bricklink seller who lived nearby. I arrived to pickup an order and am pretty sure I overwhelmed him with excitement and questions; but he was just offing the leftovers from his son’s pirate collection and probably thought I was some lunatic nerd. Oh well.

KG: A persistent piece of gossip I have encountered concerning you is that you just can’t take constructive criticism. Would you care to respond to the kangaroo-court charges or just give us your take on criticism?

nnenn: Short answer: Well, the gossips may be right… but it’s not so much that I “can’t” as much as I “don’t.”

Long answer: As a graphic designer and illustrator, I constantly take criticism from art directors or clients on everything I create. And then I must rework those “suggestions” back into the project whether I like them or not (more than two decades now.) But it’s pretty nice to create something that’s entirely mine… without an endless list of changes based more on personal preference than visual evaluation. So I make models from my imagination, post them online in the spirit of sharing, and invariably get the “you’re doing it wrong” comments. You can guess my reaction.

I don’t know where the origins of having to criticize everything came from since I wasn’t around during the early formation of the community, but I imagine it started as an occasional tool for improvement. But that’s not really part of my paradigm for the hobby: I ultimately build for the sweet fun of it, not because I should be following the direction of others… or reaching for some elusive next rung.

KG: I have encountered the pros and cons of followers over the years. As a builder with his own flock of ardent viewers or for the more jaded among us…“fan-boys”… how do you find the experience?

nnenn: The undue attention I’ve received from worshipper types has annoyed some of the community, and rightly so perhaps, but most of the solutions have been to belittle and mock either the fanboys or myself. Though aggravating at first, I now understand it’s just the default response when not much thought is given to the situation or alternatives. Either way, my prolificacy eventually (and luckily) fatigues even the most vocal adherents. 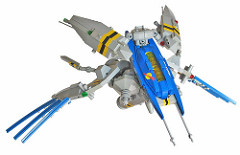 KG: Although you have explored other areas of within science fiction, you are best known for the enduringly popular one man fighter. Do you see yourself tiring of building variations of the star-fighter archetype and primarily build another type of model? 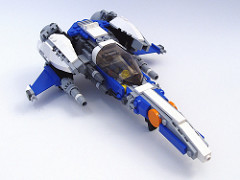 He has single-handedly launched my one-seat career. Right when I start thinking of building something different (like a mech or a farm animal) he posts another starfighter which plays on my ‘me too’ sentiment.

I do have a great affinity for variation within a series but also an interest in aviation and an urge to shoot stuff… so I’m not likely to lose interest until I cover every possible configuration. Shouldn’t take long, wish me luck.

KG: Forecast the next big building trend in either technique or style.

nnenn: Yeah right. However, I am tempted to say something about organic shaping… but suspect this will depend more on the arrival of new pieces than further community innovation. And dear TLG, I can imagine an entire smaller-scale subsystem based on bars: L-bars, O-bars, curved bars, bars with clips, double-sided clips, etc… and various shaped panels (curvy and otherwise) with bar or clip edges. Please get going. Sincerely, nnenn.

KG: Do you see yourself building into your senior years?

nnenn: Not sure; I wonder about this from time to time. As youngsters we tend to move in and out of interests (hence fads and dark ages) but if we choose something as an adult, it’s more likely to be permanent… so I’d tend to say yes. But as a flighty artist I’m prone to switching boats midstream so sometimes I think no. The most likely scenario is I’ll have to sell my collection for financial reasons and won’t have much choice in the matter.

nnenn: Wait, someone else has a time capsule too?!? (those sneaky Rigellians promised I was the only human visiting Old Earth.) But I could never pick; I’m horrible at comparing my own work. My favorites are usually no one else’s.

nnenn: Ohhh… a thinly veiled attempt to get me to browse through your complete works and raise your hit-o-meter, huh? Nice try, pal.

nnenn: (Is there really anyone besides you?) I have done a few quasi-collaborations online but I’d enjoy working with just about any of the more committed builders. I’m not sure the feeling is reciprocal though; I still score low on “plays well with others.”

KG: What is your favorite comment or review you’ve ever received on a model?

nnenn: Not repeatable, it would make a drunken sailor blush. Seriously.

nnenn: Since I’m old-school: Your mom.

If you enjoyed reading this, don’t miss Nannan’s interview with nnenn about Novvember.

8 comments on “Nate Nielson: Winter is a struggle and wind is my foe – Boilerplate & Beyond Vol. 3 [Interview]”