As I started building my second major creation (more on the first later), it became quite obvious to me that I was paying the price for over 10 years of nonexistent or half-ass sorting. It was almost impossible to build because I couldn’t find anything. So I got sucked into covering my entire living room with 25 years of accumulated LEGO in an effort to make some sense of it. Hopefully the lessons I learned from my mistakes and the help I got from my friends can help some of you who are struggling through the same process or paralyzed by the mere prospect (that was me for 10 years). 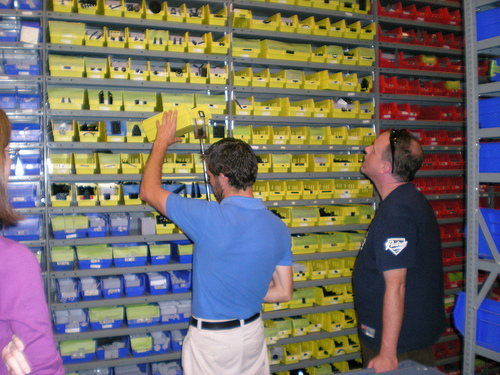 To begin with, there is no single perfect way to organize a LEGO collection that will satisfy everyone. The closest thing is a receptacle for every element in every color ever made. But even The LEGO Group can’t have all the elements in all the colors up at any single time (thus a common [silly] complaint about Pick A Brick). There’s no point setting an impossible standard for yourself. And if you’re anything like me in the early stages of hobbying, you probably don’t have enough pieces to justify hyper-organization. (Photo at right, LEGOLAND Model Shop bins, courtesy of Tim Inman)

Broadly, the two most common ways to sort are either by color (yellow, gray, pink, etc) or by type of element (wheel, tile, brick, plate, etc.). Josh has also reviewed the Box4Blox, a device that allows you to dump unsorted elements in a box and then sift them down by size, after which you can sort those sizes into appropriate colors or types.

I’ve found sorting by type and size works best for me. It’s easier for me to spot the blue 2×4 plate among the other 2 x n plates, rather than finding the 2×4 plate among the other blue pieces. If taken to it’s crazy logical conclusion, both systems will result in sorting everything by color and element, but in the interim, I find sorting by type easier to both do and use for building.

That brings us to one of the other truths about sorting and organizing your collection: It will depend on your personality, patience and what you like to build. Sorting isn’t a must either, some people don’t do it. They just break down sets and keep them separated in boxes or baggies, then use Peeron or other resources to find the pieces they want, then dig out the set and find the piece they want. Some of the best builders out there have such huge collections that it’s out of control. 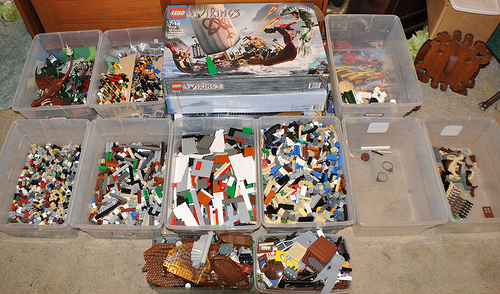 During the actual sorting, I used 16-quart tubs to sort into plates, bricks, Technic, slopes, minifigs/accessories, vehicle parts, vehicle elements, and large building elements. As a tub filled up, I split it further, for example separating my 1 x n bricks from my 2 x n bricks. I also bought a couple 39-drawer hardware units to put all the smaller elements into. Lots of people use craft trays, drawers or they recycle yogurt/margarine containers.

Once you’re going for a fairly permanent home for your bricks, here are four broad characteristics of a good permanent containment system: 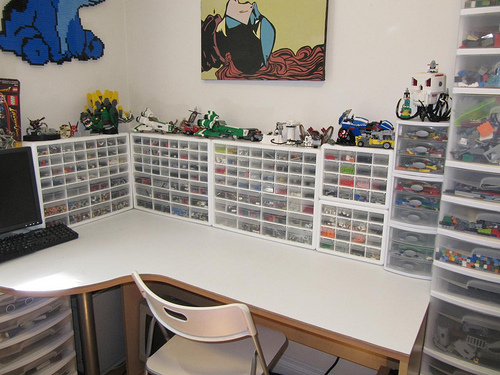 If you want to strive toward even greater perfection, here are a few specific things that I and others have found pretty helpful: 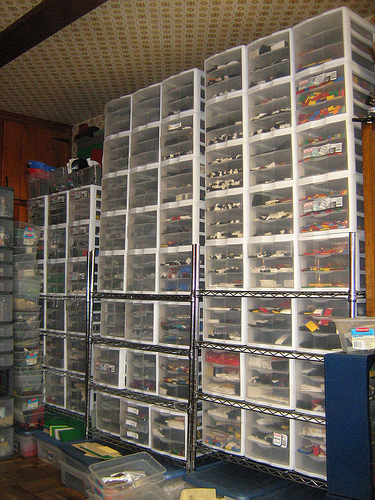 Oddly enough, I find contrast is quite helpful, both in shape and color. For example, I keep my black and white 1×1 square plates together, I can see with my own eyes easily enough which is black or white, that way I can keep those elements that I have in huge quantities together. (Photo at right, Bruce Lowell does something similar). My 1×4 tiles and 2×2 tiles are also together; I’m not going to get them mixed up very easily and I really only have enough tile to justify 3 small containers. For me, the point is to be able to find something, not have a perfectly orderly universe.

Right now I don’t have enough of most of my large specialty elements to justify separate containers for them. Though I’m not 100% satisfied with the results, I’ve dumped them in boxes by general categories, such as architectural, vehicular, printed, tires, big ugly rock pieces, maritime, etc. Which brings me to one of the most important things: It’s an ongoing process. As needs, interests, patience and size of collection change, you’ll modify the system. Because of that, flexibility is good. Finding one or two compatible containment systems will help you adapt as time goes on and make sorting easier down the road.

Fortunately or unfortunately, because of BrickCon I now have a huge cardboard box packed full of unsorted LEGO, which has set me back a bit. My wife and I are also still in the process of the complicated marriage negotiation of where/how to make room for my LEGO amongst her Barbie, pottery, sewing and scrapbook collections. Thus my stuff is stacked in the living room: 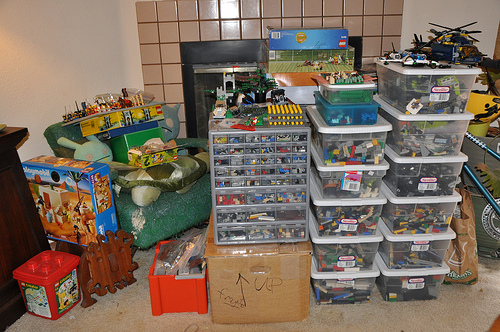 23 comments on “Sorting, organizing, and storing your LEGO – the second hobby [Essay]”