A big creation deserves a big name – that’s how 3LUG rolls. Of course, when I say 3LUG, I mean Nick Kappatos and myself. Nick and I started discussing a joint display at the end of BrickFair 2008. We spent most of the last year nailing down our layout and avoiding each other, then began construction in July. We started BrickFair 2009 sleep-deprived, nearly resulting in a fight club, but everybody kept their shirts on (for the most part) and ‘The Faded Giant’ was ready for action. 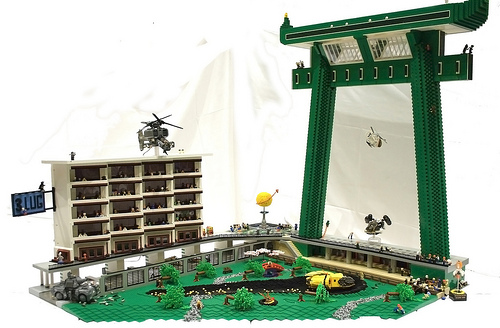 We were lucky enough to get help from our families while building this behemoth; our wives laid down copious amounts of brick. We also got lots of help from friends during setup – thanks to Adrian Drake, Carter Baldwin, Nick’s brother, Stunt Drivin’ Steve Witt, and others. 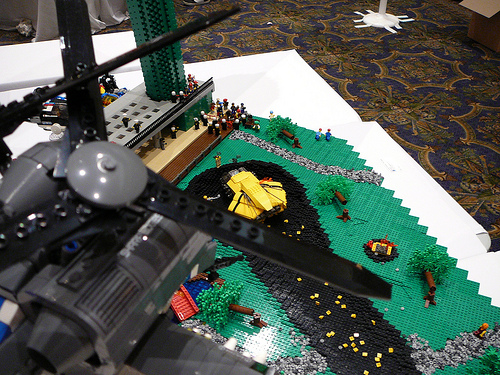 If the questions we were asked at BrickFair are any indication, you readers are no doubt wondering what the story is behind this dio. While we have a basic story in mind, 3LUG policy is to leave much of the story up to the imagination of the viewer. An alien ship has crash-landed in a park in Neo-Tokyo. Military and Police units are starting to respond, as members of the public react in various ways. Is the military more interested in the craft, or in the civilians who saw it? Why did the alien ship crash? Was it a pilot error? Shot down? No wings or landing gear? You decide.

Check out both my photos and Nick’s photos. I have more overall shots, and Nick has some nice angles and details.