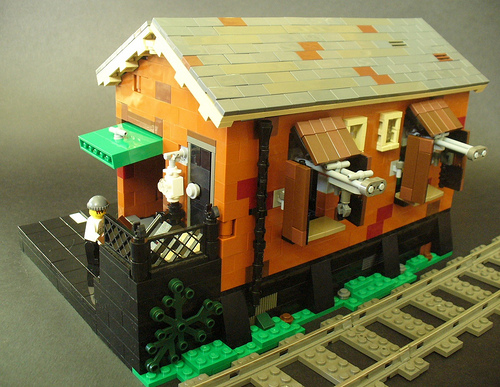 With my latest model I went public with what I usually keep private: my building stages. Since the photos and comments were up I thought it might be interesting to share this process with TBB as an example of how I (and I imagine many other people) build something.

In this case I wanted to build a structure to go with my Ol’ Brittania train. Since I’ve been fairly stumped for ideas lately I searched for a few Hornby models for inspiration and asked my Flickr friends what they thought I should build. I promptly ignored their advice and went with the least popular design.

I then made an LDraw rough draught of the building to try to get the basic layout and proportions as well as the most prominent details. I also wanted to get an idea of how many dark orange bricks I would need to build it to see if I had to order any.

Following comments from ‘the commitee’ I proceeded to make a slightly more refined model with some of the details included. You can see that the roof has been vastly improved and the entire model has become one brick taller.

For my final work-in-progress (WIP) stage I substantially altered many of the details and added still more. It should be noted that at all stages so far the model doesn’t have a back. At this stage I also learnt that the model was a) not a model of what I thought it was and b) not at all valid in its current form. I then conspired (away from the commitee) to remedy this for the final, secret, version.

Finally I spent many hours of back-ache transferring the CAD to brick and adding on all the final details (as well as a back). I changed the design from a coal drop to a small railside warehouse as I’ve always wanted to build one and it made more sense. I also altered bits of the design to allow various components to pop out for added playability.

And thus a model was born. I hope I satisfied the commitee as well as everyone else. Have fun spotting what has remained throughout the design process.

8 comments on “Anatomy of a warehouse”