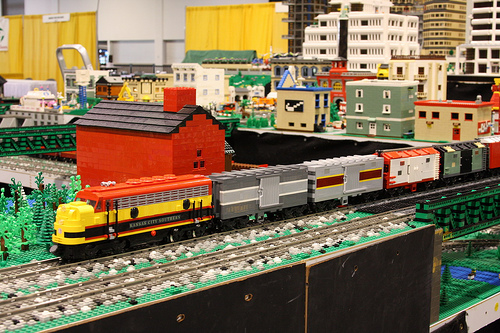 As part of the National Train Show on July 10-12, 2009 in Hartford, CT, Jamie Berard, set designer of the newly released ‘Emerald Night’ and employee of The LEGO Group (TLG), will participate as part of the show. Jamie will be giving a talk on both July 10 and 11 (Fri. and Sat.) about the design process and thinking that led up to the final ‘Emerald Night’ set, and about the Power functions components that support it. Fans are encouraged to participate to offer their views on the new platform. Jamie will also be available during the show for any questions you may have about his other excellent creations – Fast Flyer, Cafe Corner, Cool Convertible, Green Grocer, and newly announced Grand Carousel.

Also as part of this year’s show, Steve Witt, LEGO Community Relations Coordinator for North America, has graciously offered to host the traditional ILTCO pizza party at LEGO corporate headquarters in Enfield, CT after the show on Sat. July 11. Along with pizza and hanging out with Steve, Jamie and some of the LEGO Master Builders from Enfield, other events such as tours of the model shop and parts of the campus will occur. All AFOL train show participants are invited to attend.

Posting a heads-up for those on the East Coast of North America. If the pictures of past NMRA shows are anything to go by this promises to be a very impressive display of LEGO.